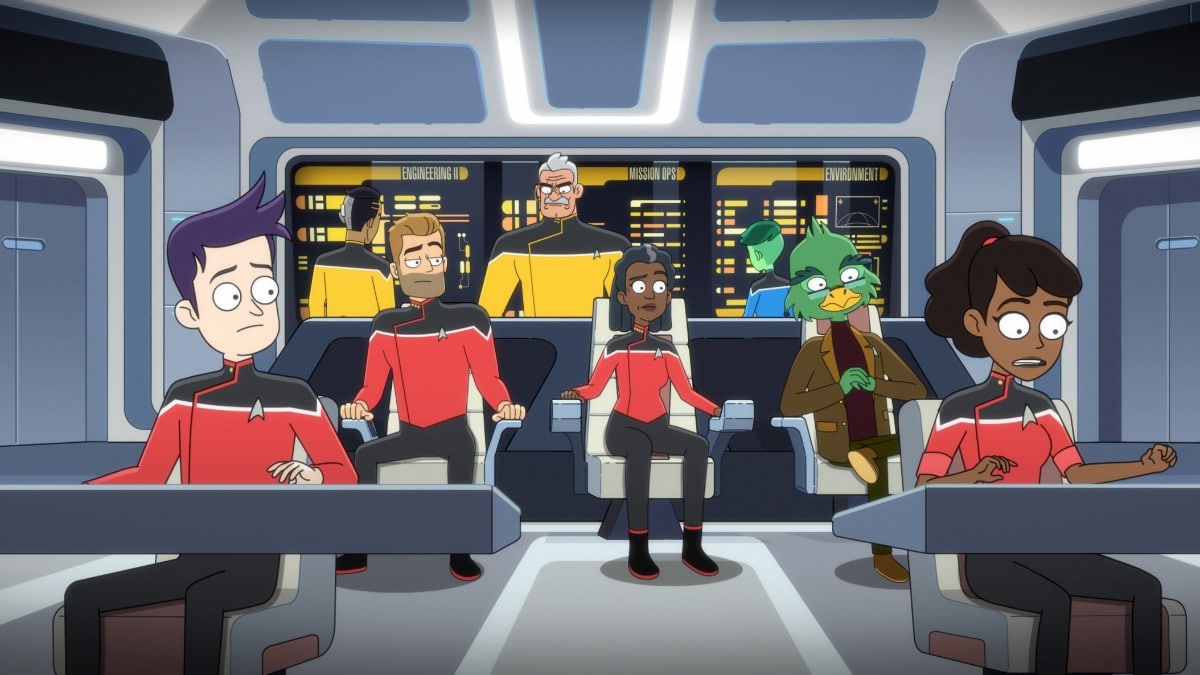 Peanut Hamper is annoying. That isn’t performer Kether Donohue’s fault. The bothersome exocomp, who bailed on our heroes in the season 1 Lower Decks finale, is supposed to be annoying. Her selfish, sneering, party girl-inspired attitude is intended as a marked contrast to the usual high-minded Starfleet officers who find themselves stranded on primitive worlds from time to time. Instead of playing dumb to avoid violating the prime directive, or looking on in wide-eyed wonder at charming local customs, the arrogant little robot insults everyone and everything she sees.

There’s a point to the disdain, at least. “A Mathematically Perfect Redemption” is a parody of questionable films like Pocahontas and Avatar, where a condescending, technologically advanced outsider shows up to an indigenous community and, after some initial skepticism and ignorance, gradually makes a change for the better by embracing their ways. This episode feints toward a similar transformation for Peanut Hamper, who needs to start someplace a little insufferable to make her eventual change-of-heart meaningful.

The setup for her story is familiar. After Peanut Hamper refused to sacrifice herself for her Cerritos crewmates, she now finds herself stranded in space until a makeshift warp-ish capable vessel deposits her on Areolis, a primitive planet full of bird-like humanoids. There, she meets their leader, Kaltoris (James Sie), a friendly village chief who embraces the unusual little bot. She also meets his son, Rowtha (Harry Shum, Jr.), who rejects technology and clings to his people’s time-tested, traditional ways.

Beyond the Dances with Wolves-style influences, the episode also plays on “Thine Own Self” from The Next Generation, and any number of other Star Trek stories where Data, or some other unique being, finds themselves in a pre-industrial society and plays along while bonding with the locals. The standard themes of the native population initial fearing the outsider, only to gradually accept them, and the interplay of technology and spirituality, are creditably deployed and spoofed through Peanut Hamper’s experiences.

This episode feints toward a similar transformation for Peanut Hamper, who needs to start someplace a little insufferable to make her eventual change-of-heart meaningful.

The problem is she’s just not much fun to spend a whole episode with. As fans of Futurama (the Trek-adjacent, spiritual predecessor to Lower Decks) will tell you, there’s plenty of fun to be had from plopping a sassy robot in the middle of a technologically-skeptical civilization. But Peanut Hamper is intentionally made to be grating — which does play on the comic mismatch of a Starfleet officer seeming rude and presumptuous rather than inquisitive and respectful — but also becomes a pain to sit through by the time the exocomp’s schtick drags into the third act.

More to the point, “A Mathematically Perfect Redemption” plays the Avatar-esque tropes so straight for most of the episode, that it becomes as rote and dull as the films that take these stories seriously. Sure, there’s the inherent absurdity of such a spiritual transformation happening to a sarcastic floating ball droid rather than the archetypal White Man Who Understands™. But that only goes so far when the episode, at a minimum, pretend to want the Lower Decks audience to genuinely buy into Peanut Hamper’s personal growth and moral epiphany.

Yes, it’s funny when Peanut Hamper and Rowtha decide to give into their romantic urges, until their coital silhouette forms a heart. And it’s a laugh when Rowtha seems ready to break into a “Colors of the Wind”-style song about the beauty of nature and love, only to unleash a piercing avian shriek instead. But for the most part, Lower Decks is content to dutifully hit the standard beats for this sort of tale with little more than a mildly arch tone and unlikely protagonist to add a new spin to the familiar material.

[It] plays the Avatar-esque tropes so straight for most of the episode, that it becomes as rote and dull as the films that take these stories seriously.

The results are rote and uninvolving. Peanut Hamper and Rowtha fall in love. She teaches him not to fear technology. He teaches her to care for the community. His father survives a grievous injury thanks to the robot’s help. The chief declares his son ready to assume leadership of the tribe. So forth and so on.

Most importantly, despite having peaced out when a “Needs of the many” situation arose back in season 1, Peanut Hamper is now ready to give her life to save the Aeori when a pack of Drookmani salvage ships come to threaten them. Despite her professed reluctance to send a distress signal to Starfleet throughout the episode, lest she be thrown in a penal colony, Peanut Hamper bites the bullet and enlists some much-needed help from the Cerritos to ward off these invaders, regardless of the consequences she may face. The progression toward alleged selflessness is solid enough, but also predictable.

For ninety percent of “A Mathematically Perfect Redemption”’s runtime, you could mistake it for a standard, if irreverent, tale of making up for past mistakes. And despite centering the installment on a sentient utility robot, the plot and character arc at the center of the episode just aren’t that novel or interesting.

However, this episode of Lower Decks does get credit for its punchline. It turns out Peanut Hamper was feigning an enlightened transformation this whole time. She deliberately invited the Drookmani to loot Areolis so that she could pose as a hero in front of Captain Freeman and earn her way off this rock without having to suffer any Federation punishments for desertion. That subversion is amusing enough. What’s more the continuity of Peanut Hamper being stashed with AGIMUS (Jeffrey Combs) in the “Self-Aware Megalomaniacal Computer Storage” wing at the Daystrom institute offers tantalizing possibilities. But at the end of the day, it’s a mildly entertaining twist at the end of trying episode.

More to the point, it makes all the going-through-the-motions of the prior twenty minutes seem like, at best, a mildly chuckle-worthy waste of time. “A Mathematically Perfect Redemption” isn’t bad. It’s amusing enough and finds decent ways to parody the stories it otherwise plays straight for most of its runtime by the final few minutes. But the juice isn’t worth the squeeze, especially when it means riding out the trope carousel with a character deliberately crafted to get on the audience’s nerves. The result isn’t a catastrophe, but it is Lower Decks’ first misfire of the season. 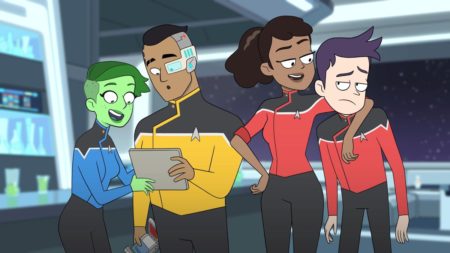 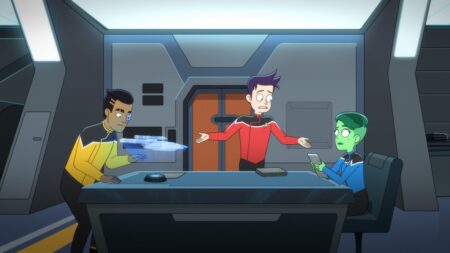 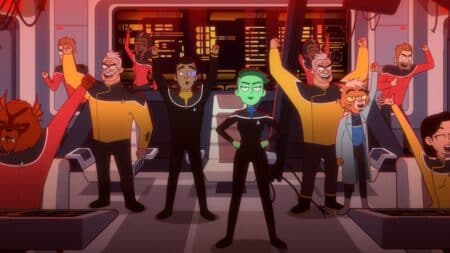