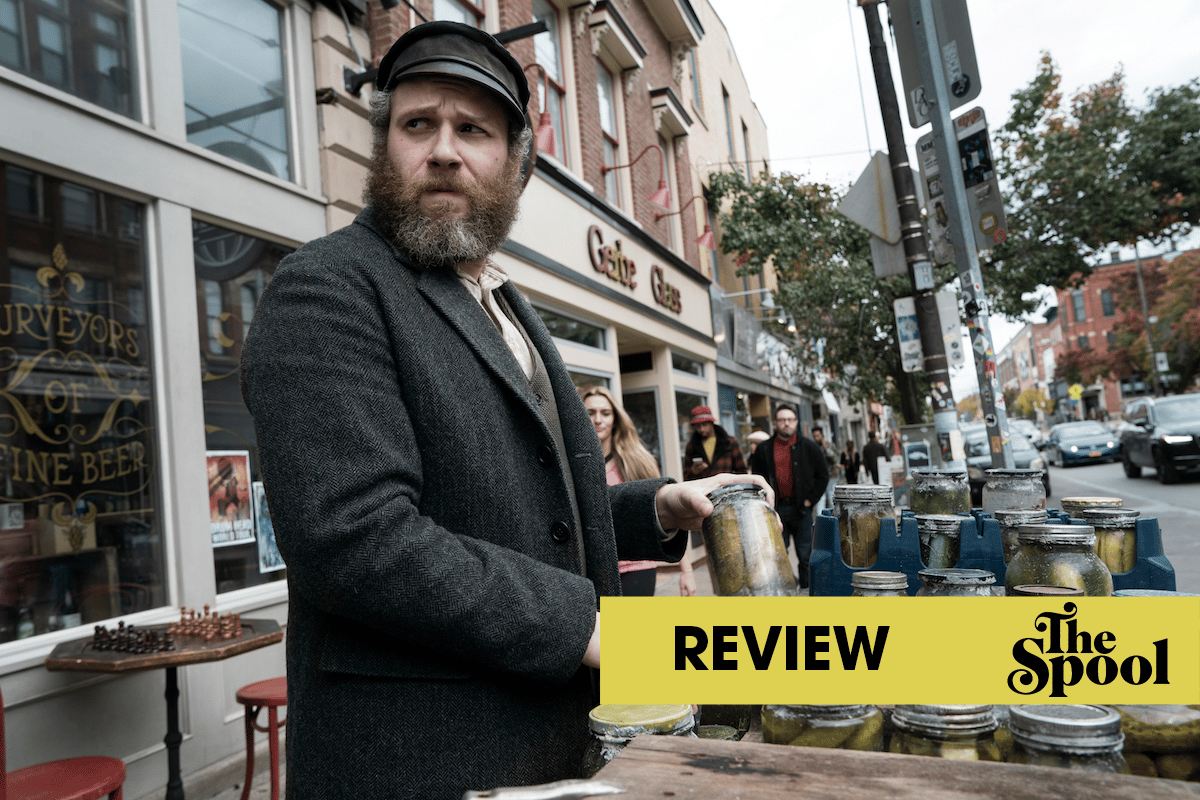 Around this time last year, Rocko’s Modern Life: Static Cling hit Netflix. The one-off special followed its main trio who, after stuck in outer space since the ‘90s, crash-landed back to O-Town. The phones suddenly didn’t have buttons. Everything was a reboot. Everything funneled to the masses was even more of a shameless cash grab than before, and the cultural shifts, while substantial, weren’t mutually exclusive. Is being unstuck in time a particularly novel idea? No, but it’s a malleable one that, when done right, blurs as many lines as it can draw.

That last part in crucial. Just as crucial is the pace and how much is shoved into that runtime. Brandon Trost’s An American Pickle, which debuts on HBO Max this Friday, is just 83 minutes without credits. It sounds like it should be pretty dense, right?

It should in theory, and to be fair, it has a few moments. However, it lacks the flow to let its myriad ideas match up with one another, let alone give them enough contrast. Adapted by Simon Rich from his New Yorker story “Sell Out,” it’s a harmless tale that tries to blend satire, family drama, and broad comedy into one narrative. Aside from the occasional chuckle and a refreshing cultural specificity at times, it’s too scattershot to leave an impression.

We begin in 1919 Eastern Europe with the humble Herschel Greenbaum (Seth Rogen). He digs ditches day in and day out, but then he finds his one and only in Sarah (Sarah Snook). They get married and immigrate to Brooklyn. Then they’re expecting a child, around which time Herschel gets a job at a pickle factory. Alas, it’s not too long until he falls into a vat of brine, which just so happens to preserve him until some kids stumble upon him a full century later. After a quick hospital stint, he meets his descendant, a freelance app developer named Ben (also Rogen).

Ben takes him in, and it’s at this point where the humor starts to coast towards the norm. It’s serviceable, but every joke is clear right when a setting or character is introduced. Ben is trying to sell an app that lets consumers see how ethical different companies are. He also, as it happens, lost his parents five years ago, leaving him a bit of a loner. Technology, the gig economy, 2019 ethics—they all leave Herschel in a tizzy. It’s when he starts selling dumpster-found pickles that he forges his own way in the world. And hey! He has a beard, an accent, and a retro look, all while selling organic food! Yep, he’s a big hit in the hipster scene.

Aside from the occasional chuckle and a refreshing cultural specificity at times, it’s too scattershot to leave an impression.

The plot points are pretty obvious from the jump, which would be fine if An American Pickle had more focus. Instead, Trost divides the script’s perspective between Herschel’s and Ben’s. Herschel’s scenes are closer to the core of the movie, but they’re more predictable in interactions and jokes. Ben’s scenes are much more succinct. Alas, those don’t completely work either because of how much they distract from Herschel’s own conflict. The parallels are clear. The movie just doesn’t have the rhythm to mine their potential.

Yes, a big issue here is the pacing, what with a 50-minute story scattering an extra half-hour of fluff in. However, Trost’s tonal shifts are what make the movie feel like two stories squished together. One minute it’s about not being able to have a family in today’s economy; the next minute it’s a slapstick gag. Some parts establish the Greenbaums’ Jewish heritage by straddling the lived-in and the nonchalant, and it’s these moments when the picture works best. It’s just too bad there are so many throwaway scenes in between them.

By the last 10 minutes, it’s almost like the movie tries redeeming itself by plunging into its more dramatic tendencies. It’s never manipulative, but the final shift in both tone and location feels too sudden to stick the landing. It points at what it could have been with a bit more guidance instead. It’s pretty easy to tell that An American Pickle is an adaptation of a short story, and it’s also pretty clear it’s a directorial debut. Neither of those are anything to be ashamed of. It’s just that the pieces could have been ironed out, and as they are, they’ve been done better elsewhere.