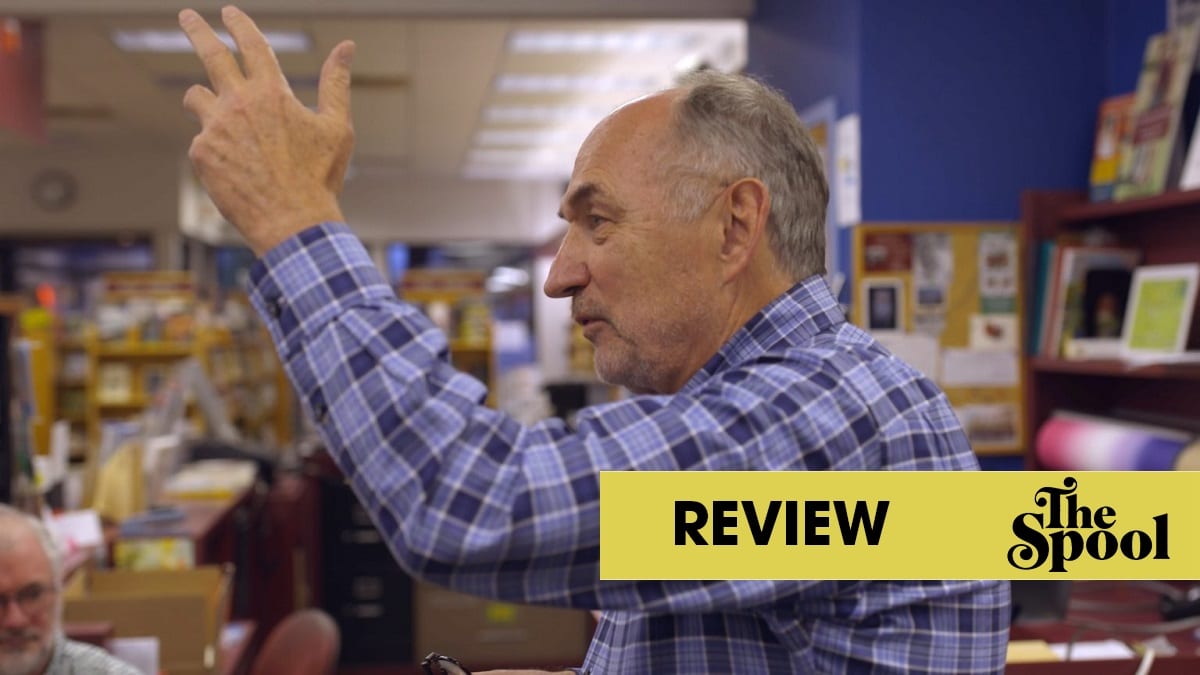 A cross-country book tour is the backdrop for THe Book Keepers, an engrossing doc about coping with the loss of a loved one.

On March 2, 2014, Penguin/Random House published Carol Wall’s book Mister Owita’s Guide to Gardening: How I Learned the Unexpected Joy of a Green Thumb and an Open Heart, about her friendship with a Black man in a lily-white neighborhood, and the racial understanding she came to. Seeing her very first book hit the shelves should have been a moment of unbridled joy; instead, it came during a period of tragedy, as Wall’s breast cancer had metastasized and had started to attack her immune system and brain. By the time December 2014 arrived, Carol Wall had passed away at the age of 63.

This was not the end of her story.

In the wake of her passing, her husband, Dick Wall, embarked on a cross-country book tour to promote the book. Wall works in the world of law; neither books nor public speaking are his area of expertise. But throughout 2015, he traveled to every bookstore possible to promote Carol’s book. During these stops, he gives talks about the experiences of living with the grief of losing a loved one. That’s not usually the kind of topic you bring up when selling a book. But the bereaved widower is doing things his way, as he navigates this new Carol-less world that lays before him.

The Book Keepers chronicles Dick’s exploits in this book tour, with their son Phil Wall serving as a cameraman and director. There’s an extremely natural quality to the footage they’ve captured, reinforced by an unobtrusive camera that’s usually positioned at low or side angles to capture Dick doing things like driving or eating at restaurants. It never feels like he’s acting for the camera. The viewer frequently feels like an unseen spy gazing a peek into the most mundane moments of his life.

This level of authenticity is further apparent in Dick’s various ruminations on existence. In the wake of Carol’s life, he’s not become an expert philosopher on this life. Instead, he expresses an understandable sense of frustration with his loss. “All relationships end in sadness,” he remarks on one car ride. Another trip on the road leads to him remarking that the roads in life “end in dead ends.” While he keeps his demeanor composed, you can feel his raw aching in these lines.

There’s an extremely natural quality to the footage they’ve captured, reinforced by an unobtrusive camera.

These bon mots are a pattern with Dick, which is what makes him such a fascinating figure. He’s not a monotone person, but he isn’t prone to extreme bouts of joy or sadness. He’s matter-of-fact in his delivery, which makes his discussions of coping with his loss all the more heartbreaking. He talks frankly about how each pivotal moment of the year (birthdays, Christmas, etc.) now reminds him of Carol’s final pain-ridden year of living. He’s lived with the daily presence of grief for so long that he can now only talk about it in such candid terms.

These kinds of moments in The Book Keepers are appropriately gutting. But the most memorable of Dick’s stories are the ones where his romantic passion for Carol still burns. When he tells us how he and Carol met as High School sweetheart, you can tell it’s a story he’s told so many times before. But there’s a quiet sense of delight in how he tells it. as if he still can’t believe that the head cheerleader would go out with a “radical long-haired hippie Catholic” like himself.

Balancing these anecdotes with somber reflections gives The Book Keepers a tonal complexity. This quality beautifully captures the similarly complex nature of the way we cope with loss. These elements, along with an emphasis on how Carol’s book is still resonating with readers, make The Book Keepers a compelling creation. It’s not a movie about life as much as a movie about learning to live in the wake of tragedy.

“Not all of this is terrible,” Dick says midway through the movie. That sentiment alone feels like an epiphany. He also notes that Carol “continues to teach me” long after she’s passed. In that moment, The Book Keepers captures something profound. You never overcome loss. It’s always around. But as Carol Wall’s impact on him shows, so too are the people we love.