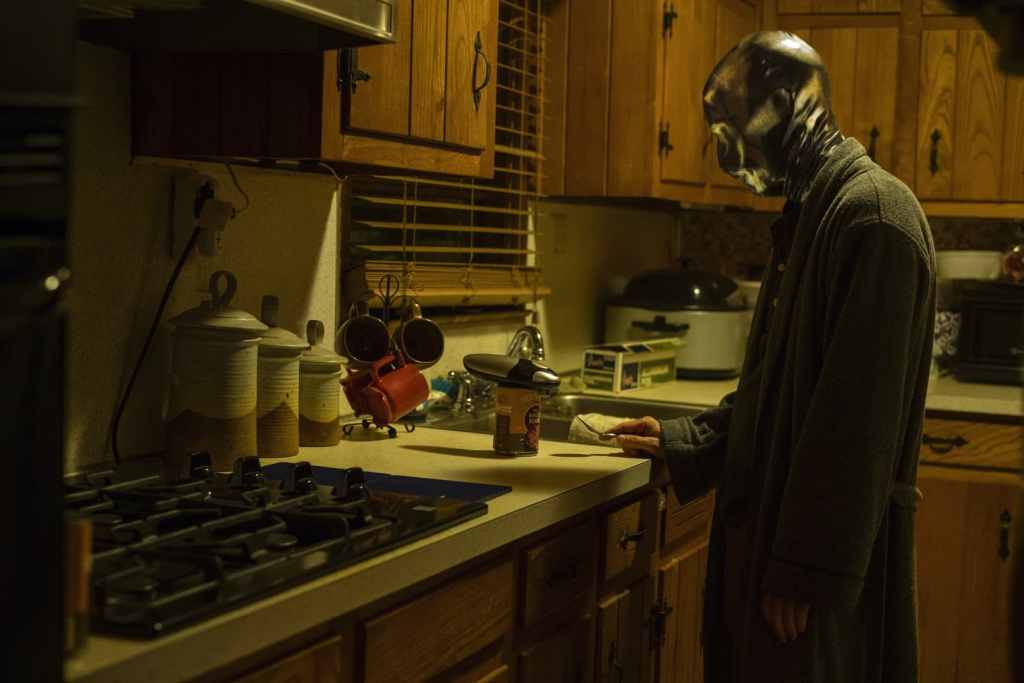 Watchmen Episode 5 explores the cyclical nature of trauma in an episode that serves as a haunting showcase for Tim Blake Nelson.

Where were you on 9/11? We all have our own stories to tell, whether we were in New York City that day or watched it, mouth agape, on TV screens and in classrooms across the country. I was in ninth grade when it happened, and I remember the shocked faces of everyone around me, our complete inability to process the tragedy, and the telling silence between myself and my classmates as we waited for our parents to pick us up. For many Americans, 9/11 represents a collective trauma, something that has fundamentally changed the outlook, politics, and culture of our nation. Few works of media have approached this deep, inescapable trauma with the comprehensiveness it deserves: Damon Lindelof‘s The Leftovers is among them. Tonight’s episode of Watchmen, “Little Fear of Lightning,” comes closest to capturing that hell of experiencing the end of the world and being forced to live on afterward.

Like episode three before it, this episode veers largely away from the Abar saga and onto one of the show’s supporting characters: this time, it’s Wade Tillman, a.k.a. Looking Glass (Tim Blake Nelson), the laconic Tulsa PD officer known for his mirror-like mask and nihilistic disposition. He’s, ironically, a mirror image for Rorschach; they’re both skinny, disgruntled white dudes with a mean streak and an absolutist approach to justice. If Laurie (Jean Smart) from last week is right, and superheroes wear masks to deal with their trauma, LG’s trauma can be traced by to the comic’s climactic moments.

Turns out he was in Hoboken, across the street from NYC on 11/2/1985, the day Ozymandias unleashed the giant squid at the end of the Watchmen comic and changed the world forever. Pranked into a hall of mirrors at the moment 3 million people are killed by the squid’s psychic blast, Wade is forever scarred by this moment: we see he grows up to become a deeply cynical doomsday prepper, complete with expensive bunkers and a pathological need to wrap his brain in “reflectatine,” which repels psychic blasts. It even lines the lid of his baseball cap when he’s off-uniform.

Where Rorschach is a bitter, paranoid reactionary who rejects society out of misanthropic anger, Wade’s paranoia is driven by deep, existential trauma and a fear of the world around him. It’s not just 11/2, either; his fear of doomsday dovetails into his fear of abandonment, given the prank that was played on him just prior. He has an ex-wife (Eileen Grubba), who works at a boutique pet-cloning facility (content warning: this episode features an incinerated puppy), who’s clearly remarried based on her new surname. “For seven years I tried to convince you I wasn’t gonna run off with your clothes and leave you naked.” He’s a lost child, constantly trying to protect himself from a terrifying world he can’t control.

Wade also runs a support group for other folks who have to work through their 11/2 trauma. One man talks about “genetic trauma,” the idea that trauma can be locked into one’s DNA. He wasn’t there on 11/2, but his mother was. “It’s like I inherited her pain.” Wade projects a front of strength for his fellow groupies — “we are in a tunnel, and every tunnel ends” — but a mysterious newbie (Paula Malcomson) pins him down: “you’re still in the tunnel like the rest of us.” Trauma makes us uncertain of the world around us, and no amount of prepping will make the difference.

This becomes even clearer when a dropped head of lettuce from his new friend’s truck (the same lettuce found on the dead cop’s person from episode one) leads him to follow her truck to an abandoned warehouse, which turns out to be the Seventh Kavalry’s headquarters. But of course, the woman turns out to be a honeypot, and they planned to bring him there. He’s joined by Senator Keene (James Wolk), who reveals that the 7K is being guided from the inside — first by the new-dead Chief Crawford, now by Keene — to serve a grander purpose involving an illegal teleportation portal. To get him to cooperate and “serve up” Angela (Regina King) for her coverup of Crawford’s real killer, Keene plays a stolen video that completely upends Wade’s already-tenuous understanding of the world.

Trauma makes us uncertain of the world around us, and no amount of prepping will make the difference.

What’s on the tape? Why, it’s Adrian Veidt (Jeremy Irons, de-aged), pre-recording a message for future President Robert Redford in 1993 from 1985, explaining how the squid was actually faked by him to stop the Cold War and usher in a new era of peace. Redford’s presidency was pre-ordained too, all part of Veidt’s dreams of utopia. Exposition-wise, it’s a bit clunky for a show this deliberately opaque, but I appreciate the relish Irons brings to the revelations. Plus, it drops like an absolute hammer for Wade.

“Is anything real?” he asks Angela in the police station, before revealing what his ex said about Will’s pills: they’re Nostalgia, illegal pills that store memories but cause psychosis. His desk bugged, he manages to catch Angela confessing to covering up Will’s murder of Crawford before Laurie puts her under arrest. Naturally, Angela decides to O.D. on her grandfather’s Nostalgia, whose results we’ll see next week. (This week and next are some great, great television.)

Not only is “Lightning” a terrific character showcase for Looking Glass (and actor’s showcase for Nelson, calibrating his mousy, forlorn Southern sensibility to peak powers), it’s a testament to Watchmen‘s ability to expand on the comic’s mythos to explore extremely contemporary concerns. Turning the climax of the book into a 9/11-style existential tragedy, and tracking the ways it’s changed this society (and its individuals), is a brilliant way to explore the trials and tribulations of trauma. Even as you try to do everything to protect yourself and do the right thing, your world can be upended by events outside your control. In the closing minutes of the episode, as a group of 7K roll up on Wade’s house to subject him to an as-yet-unseen fate, that sentiment has never been clearer.

Clint Worthington
Founder, Editor-in-Chief at The Spool
Clint Worthington is the founder and editor-in-chief of The Spool, as well as one of the founders of the website/podcast Alcohollywood in 2011. He is also a Senior Writer at Consequence of Sound, as well as the co-host/producer of Travolta/Cage. You can also find his freelance work at IndieWire, UPROXX, Syfy Wire, The Takeout, and Crooked Marquee.

Latest posts by Clint Worthington (see all)
Liked it? Take a second to support The Spool on Patreon!