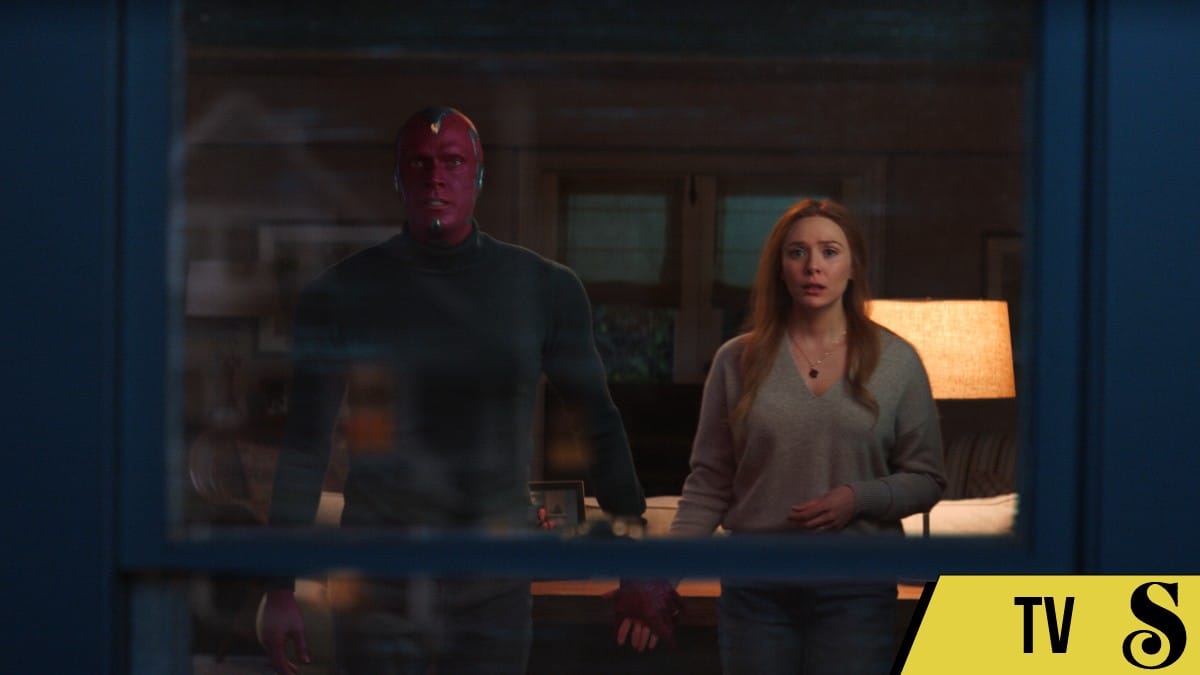 The end (for now) of Wanda and Vision’s story reflects our own feelings of joy stolen and abundant pain the previous year has wrought.

The world is on fire. We are still very much in the throes of a pandemic that has cost untold human lives and inflicted even more misery. In the midst of all of this, many of us have retreated to the warmth of T.V.’s comfort food, where laughs are plentiful and problems are solved in thirty minutes or less. It’s a preferable alternative, albeit a temporary one, to the hurts and horrors of the real world, providing a little spiritual getaway in tumultuous times to soothe our pains or block them out entirely.

That’s part of why WandaVision has been so resonant and so successful. It certainly helps that the series was one of the very few big releases at a time when the entertainment industry has been collectively holding its breath. And it also doesn’t hurt that the show represents the first big MCU project in eighteen months.

But on a deeper level, it’s strangely easy to relate to Wanda (Elizabeth Olsen) right now. None of us knows what it’s like to lose a robotic boyfriend powered by a magical gemstone at the hands of an intergalactic warlord. But most of us know what it’s like to experience grief and seek comfort in the stories that give us a fleeting mental break from it. None of us knows what it’s like to conjure a reality-warping bubble where everything inside is shiny and perfect and numb. But most of us comprehend how easy it would be to give in to that sort of escape if it were at our fingertips.

And yet, that’s just what these televised balms are — an escape from reality. The worlds we flee to via our various screens are no more real than the one that Wanda constructs with her magic. Worse than that, as much solace as these escapes can provide, they can also be a means to avoid facing the truth and, in our grief, can lead us to hurt others in the process.

The beauty of WandaVision’s finale comes in how it grapples with all of this: the love and loss of its eponymous couple and the painful epiphanies that come when Wanda fully understands the consequences of her power and her grief on others and on herself.

Of course, “The Series Finale” is, true to its name, also the explosive climax of a superheroic tale, and so has to do all of those things that people expect when watching their caped champions reach the final act. These elements are well-designed and creditably realized, but also the least interesting parts of the finale. If anything, the show feels a touch ungainly as it packs in grace notes, codas, and moments in the sun for all of its surprisingly voluminous cast members in the show’s swan song.

None of this is bad by any stretch of the imagination. Some of it’s a little quick or convenient, but on the whole, it’s a good thing that WandaVision not only remembers all of its characters but finds a built-to and meaningful way for each to contribute to the series’ endgame. (If you’ll pardon the expression.) The only catch is that most of it feels like the standard third act folderol that you could see in any MCU flick, rather than something reflective of the unique things this series did so well.

The beauty of WandaVision’s finale comes in how it grapples with … the love and loss of its eponymous couple.

The big fight does feature some smartly set-up reversals, like Wanda turning Agatha’s own lesson on runes against her to win the day. The show calls back to past adventures, with Wanda using her nightmare-inducing abilities for the first time since her debut in Age of Ultron. It even saves room for a few more explanatory reveals: like “Fietro” as the famed “Ralph,” the unveiling of the Darkhold, and details as to what Hex Vision’s truly made of.

But the real crux of the episode doesn’t come amid exposition or teases or Agnes’s power-draining purple torrents. It comes in her less tangible attacks on Wanda’s psyche. The evil witch cuts the strings on Wanda’s “meat puppets,” and a crowd of familiar faces rushes Wanda with pleas to be allowed to reach their loved ones: so they can look after them, hold them, or just let them know they’re okay.

It’s a harrowing sequence, one where Wanda’s moral chickens come home to roost. At that moment, she’s forced to realize that by holding onto the people she’s lost and evading the trauma of their absence, she’s inflicted the same hardship upon the poor denizens of Westview. She’s kept them from the loved ones they’re just as desperate to hang onto.

In the same way, the most engrossing part of these superpowered dust-ups is not Vision fighting his Dr. Manhattan-esque doppelganger. It’s the moments when the two synthezoids stop the fisticuffs and begin an in-flight meditation on identity and memory and the nebulous places where the two intersect.

There’s some plot hurdling there too, as Hex Vision restores his counterpart’s SWORD-blocked memories. But the impact of the scene comes from Vision’s (and the show’s) choice not to resolve this conflict with violence, but rather with understanding and a chance at something more profound. This whole catastrophe began as an effort to restore Vision after his devastating death. Taking time amid the energy beams and fistfights to ruminate on how that effort succeeded and how it failed, in philosophical tones, marks the thoughtful approach this show’s taken from the beginning.

Wanda has to reckon with all of that: slanted reflections of the love she tried to revive, the lives she compromised in the process, and the realities she ran from when she created this comfortable but fractured place. Agatha accuses her of embodying its flaws, of the Hex being broken because she is. Wanda rejects those barbs in one of those “I know my power” moments du jour, permanently trapping Agatha in a sitcom prison.

At the same time, though, she chooses to let go of that comforting fiction of her own volition. Agnes tempted Wanda to give up her power and continue to let others suffer in the name of remaining ensconced in this consoling lie. Instead, Wanda willingly gives up her oasis and the warm, T.V.-friendly glow it represents, even at the cost of the loved ones she conjured and the perfect life she imagined with them.

The most powerful and moving scenes in “The Series Finale” have little to do with the episode’s grand confrontations and everything to do with their aftermath. We see passion and tenderness, mourning and healing, in the scenes where Wanda and Vision bid farewell to their children, and ultimately to one another.

It’s hard to know what sort of judgment, if any, Schaeffer and company want to pass on the Scarlet Witch in the final tally.

WandaVision doesn’t rush these scenes, recognizing them as the true climax of the piece. Writer/creator Jac Schaeffer makes time for these characters and performances and visuals to inhabit that emotional space as long as necessary. There is, as in all good stories, a cost to Wanda doing the right thing here, to this big step toward recovering from unfathomable trauma, and the show does not gloss over it.

On the other hand, it’s hard to know what sort of judgment, if any, Schaeffer and company want to pass on the Scarlet Witch in the final tally. Wanda is not fully absolved — as the glaring faces of the people she enslaved, and the dire warnings that in popping her bubble, she may doom the whole world — seem to suggest. But despite engaging in acts the script acknowledges are anything but hero-like, she’s also made sympathetic, at times even triumphant, when she recognizes and accepts her grief and moves forward despite it.

It’s hard to know how much of these contradictions represent genuine complexity and how much this is simply a self-contained character story running aground on the need to set up other films and TV shows. But the series ultimately seems to land somewhere in the middle. Monica tells Wanda that she doesn’t hate her; that if she were in the same position, with the same powers, she would bring her own lost loved one back to life. She, too, would run away from reality.

There’s an acknowledgment of something very human at that moment. The Hex is ultimately a bad thing, for the people trapped inside it, and also for Wanda’s ability to fully heal and move on. Wanda retreats to a place without these modern palliatives, after having magnified so much of her own hurt in search of them, a seeming acceptance of the damage numbing yourself in this way can do.

And yet, the prospect of going somewhere that the cold and brutal trespasses of this world have no purchase remains an impossibly tempting one. In the unique time when WandaVision arrived on the scene, we are all still processing a year where things have been especially difficult. In these times, the easiest thing in the world to do is turn away from the world’s horrors and instead bury ourselves in the stories and art that bring us comfort and escape. Even stories like this one.

In the end, we may not agree with Wanda’s choices. We may still feel the stolen joys and abundant pains that sustained her fantasy world. But, in WandaVision’s greatest strength, we understand.