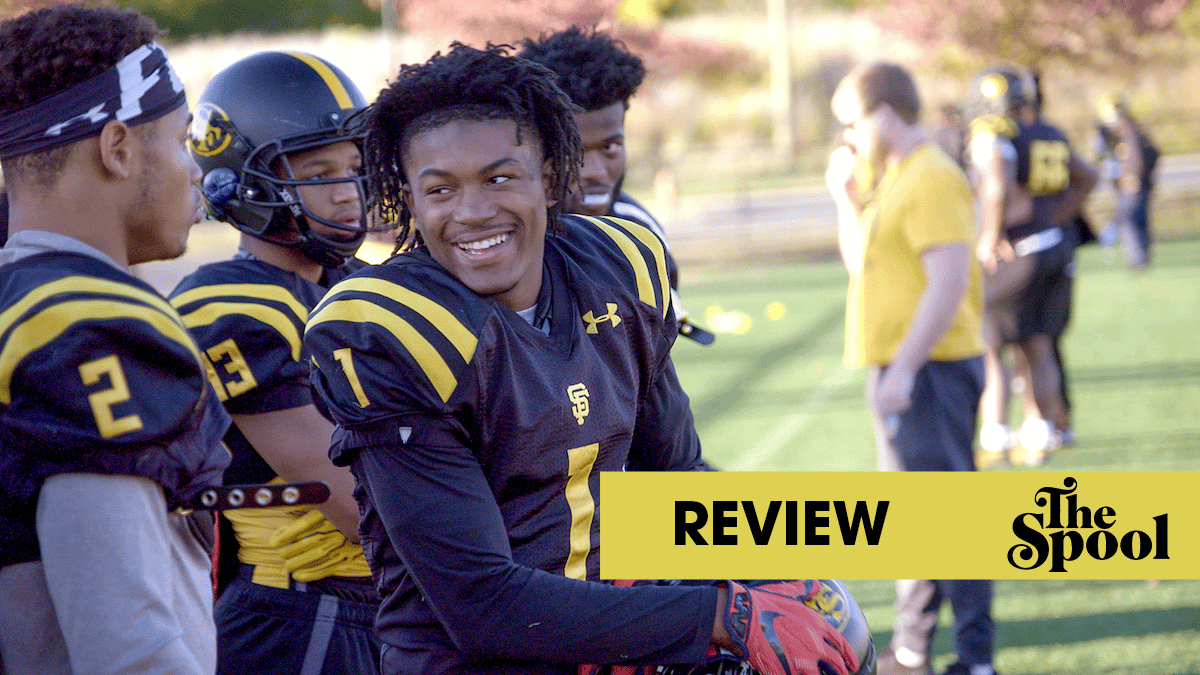 HBO’s sports documentary series The Cost of Winning is an incredible true story, but it’s not incredibly told. On the surface, it’s a traditional doc about a high school football team that hits the usual tropes—overcoming adversity, heartbreaking losses and inspiring wins on and off the field, etc. The problem is that while there’s so much going on under the surface, the series dips its toes in rather than giving itself the bandwidth to explore its complex issues.

It follows the lives of the players, coaches, and teachers surrounding the St. Francis Academy Panthers, the football team for a predominantly Black private school in an underfunded and violent section of Baltimore. The players face the daily traumas of gun violence and poverty that most Americans couldn’t imagine. They also happen to be some of the most elite amateur football players in the country.

They’re so elite, in fact, that their private school league (filled with much wealthier and whiter schools) kicked them out after seasons of domination, leaving the program to fend for itself. They have to create their own schedule filled with top teams from all over the country (but mostly Florida) and pay for their own travel expenses. That, alas, runs at hundreds of thousands of dollars.

Filmmakers Rob Ford & Maurice Holden may have wanted to go deeper into things, but it’s quickly evident there’s no time. I rarely complain that anything is too short, but this doc could and should be longer than four 30-minute episodes. It’s so short that it’s a disservice to the lives of the people involved, and the series doesn’t fully scrutinize the social and racial implications as a result. It’s the kind of subject matter Steve James or Ezra Edelman, both masters of showing the intersection of sports and race in America, could make a masterpiece with, but they would get more hours to craft it.

One casualty of the running time is the answer to this question: How does this underfunded school from an underfunded neighborhood get the money to run its program? Enter coach Biff Poggi, a self-made millionaire who personally pays the coaching staff’s salaries, players’ tuition, and even the housing for those without a stable home of their own. He’s a fascinating character, but like so much in the series, we don’t get a full scope of who he is. The Cost of Winning shows he obviously cares deeply about the well-being of his players, but at the same time, he’s a rich hedge fund manager who apparently doesn’t have money for sleeves.

because the series doesn’t do enough groundwork by spending enough time with anyone, it leaves us with quick bites of lives and stories we wish we knew more about.

The series really gets fascinating once the attention sets on the players and the hardships they face even when they’re not playing the best athletes in the country. However, because the series doesn’t do enough groundwork by spending enough time with anyone, it leaves us with quick bites of lives and stories we wish we knew more about.

A prime example includes all-star defensive end Demon Clowney, who loses several loved ones to gun violence. There’s even a last-minute twist in his college recruiting journey that’s heartbreaking and gives us a brief peek at the cold, chew-up-and-spit-out world of college football recruiting, but it doesn’t quite stick the landing. Another comes in the form of a scene in the final episode; surrounded by friends and loved ones, several players sign college acceptance letters. We know these guys sacrificed and fought for this moment, but while it should move us to tears, it falls short. We barely know these guys.

A lot of this is due to the structure of the episodes, which is also unfocused and doesn’t build to anything in particular. The editing isn’t exciting nor adds much besides being general place markers to let us know where in the season we are. It may be because the filmmakers are really telling us it’s the education these young men are getting, and what really matters is how they use football to make a better situation for themselves and their families. This is true—admirable, even—but without the patience or insight to explore why they need to excel at a sport in order to escape their surroundings, The Cost of Winning doesn’t know what it wants to be.

The Cost of Winning premieres on HBO Wednesday, November 10.

The Cost of Winning Trailer: