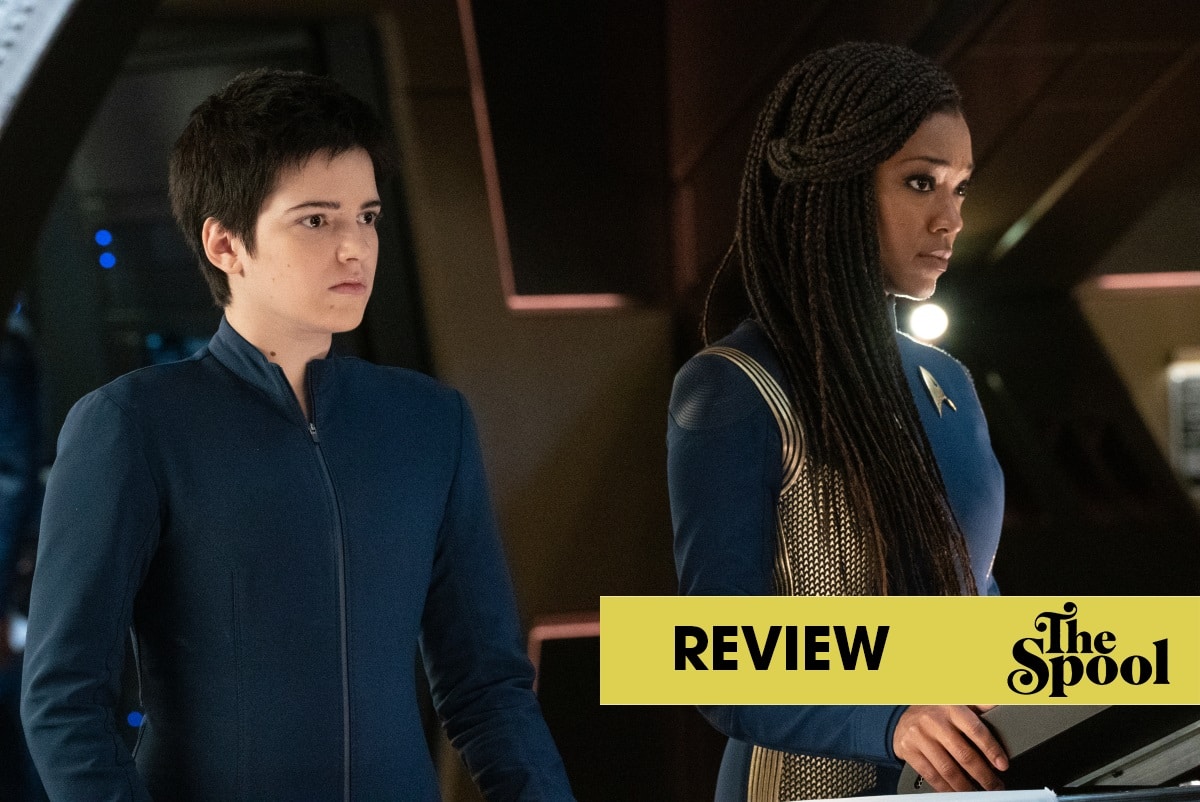 Four episodes in, and Star Trek: Discovery is finally on its way. Burnham (Sonequa Martin-Green) is reunited with the crew, Saru (Doug Jones) is officially captain at last, and we’ve got a mission for the season: find the remnants of the Federation in a 31st-century universe ravaged by The Burn. But amidst all the sturm und drang of the first three episodes, “Forget Me Not” is a pleasant respite from laser guns and high-stakes showdowns to recenter the show back on its characters. Not only that, we get a lovely focus on our new crew member, Adira (Blu del Barrio), that not only offers up a sweet love story but serves up some nifty on-screen representation.

Step one on Discovery‘s list: find the Federation again, their only clue as to their current whereabouts being a mysterious message from Admiral Senna Tal, a Trill whose symbiont just so happens to be lodged in the body of Adira, their new 31st-century stowaway. She’s human, so she can’t access the symbiont’s memories like other joined Trill; she doesn’t even remember how she was implanted. They spore their way to the Trill homeworld to see if they can help fill in the gaps, and retrieve Senna Tal’s memories of the Federation.

Naturally, they’re ecstatic at the prospect of seeing another of their own returning home; the Burn decimated their population when the Burn cut off interstellar travel, so Tal’s return is a blessing. Saru sends Burnham with her down to the planet because, like her, she understands what it’s like to be cut off from your own people (i.e. “we’re pairing you two together for thematic reasons”). But when they arrive, the Trill are shocked to learn that Adira’s human, and suddenly get very thirsty for retrieving that symbiont — even if Adira dies in the process. You see, there are even fewer Trill capable of joining with a symbiont post-Burn; if they don’t find new hosts, they’ll die as a species.

Luckily, Burnham’s a solid chaperone, so she breaks Adira free and get a sympathetic Trill (Andres Apergis) to escort them to the Caves of Makala, where Adira can hopefully connect to her symbiont. It’s here that we get to “Forget Me Not”‘s emotional core — Burnham accompanies Adira into the waters of the Caves, which send them through a symbolic dreamscape representing the gulf between Adira’s memories and that of the Tal symbiont. Turns out, Adira’s symbiont belonged to her former lover, Ray Tal (Ian Alexander), who was killed in an explosion which forced her to accept the symbiont in order to keep it alive. Think of it like the times that people get severed fingers attached crudely to their bodies just to maintain blood supply; it’s vestigial, but it keeps the organism alive. (Shades of Ezri Dax’s emergency implantation with Jadzia’s symbiote on Deep Space Nine, though this time we get to actually see it.)

I’m of two minds on the way Adira and Ray’s tragic romance actually plays out. On the one hand, we’re so starved for trans and non-binary representation that it’s fantastic to see a real on-screen romance between non-binary (del Barrio) and trans (Alexander) performers. (The show, for what its worth, treats Adira as female-identifying, another great reminder that enby actors don’t just have to play enby characters.) On the other, Alexander reads a little flat as a performer, and their dynamic is treacly to a fault (they treat each other to cello recitals, make memory quilts, and say things like “we have a love thing”). Plus, it’s hard to escape the “Bury Your Gays”-iness of it all, with a perfect queer love ripped apart by tragic circumstances — a criticism already levied against Stamets and Culber in season 1, though they obviously reversed it.

But there’s something really inviting about the way Trek uses the allegorical nature of the Trill to explore not just queer identity, but the often uncertain nature of queer romances. Much has been written about the way the Trill has served as erstwhile trans allegories in Trek, with some trans fans citing Jadzia Dax as an early icon of theirs. When Adira finally gets in touch with her past selves, who span age, gender, and race, she says, “I’m still me. I’m just more me.”

Now fully reconciled, the newly-christened Adira Tal actually represents hope for the continuation fo the Trill race, now that non-Trill are theoretically capable of being joined.

There’s something really inviting about the way Trek uses the allegorical nature of the Trill to explore not just queer identity, but the often uncertain nature of queer romances.

Back on Discovery, the rest of the ship is also working to reconnect as a singular organism. The crew, we learn courtesy of a Star Trek Beyond-style voiceover from Dr. Culber (Wilson Cruz), is still adjusting to their uniquely isolated place in this new universe. Everyone they’ve ever loved is dead; even the Federation is a myth. “I’ve been alone; I’ve been lost,” Culber notes. “Surviving can become… livable.” It’s a nice way of reminding us of the means by which season 2 Discovery resurrected him, and I’m glad we’re not just using that as a retcon, but as an important part of his own character.

In season 1, Captain Lorca led Discovery with a stern hand; season 2 saw Captain Pike strike an instant rapport with the crew as their Friendly Dad. Now that Saru’s finally captain, what kind of captain will he be? It’s a question he asks himself, especially as he tries to reorient his crew with a friendly dinner in the conference room, complete with (ugh) a haiku-off.

Unfortunately, tensions run high: Stamets (Anthony Rapp) bristles at Tilly’s (Mary Wiseman) ideas for new interfaces for the spore drive. Detmer, meanwhile, is still shaken up from the transition to the future and feels unappreciated even though she successfully landed the ship in the future. “I’m the pilot,” she shoots back at Stamets. “We move it.” (Georgiou (Michelle Yeoh) just sits back and enjoys the chaos.)

And it’s here that Saru finds out what kind of captain he’ll be; he’s an ensemble builder, someone who leads from behind while encouraging unity and highlighting the skills of his peers. In management jargon, he’d be a transformational leader, someone dedicated to uplifting his individual team members, making them feel valued, and developing their talents.

Saru reminds them of their Spartacus moment at the end of season 2, where they all agreed to travel to the future together, and asks them to repeat it around the dinner table. Sure, it doesn’t work at first; that’s what leads to the argument. But one by one, they all come back and start to bury the hatchet. Maybe we all just needed a process moment, an outlet for their frustration and loneliness.

All in all, “Forget Me Not” is a transitional episode for Discovery‘s new season, easing us from the plot-heavy establishment of this new world into some deeper character work to reacquaint us with the characters (and entrench us in one of our new leads). It’s a slower hour for the show, but I appreciate that; it allows us to feel a bit more like the Trek of old, and get to know our heroes and their vulnerabilities a bit better. Just as Adira reconciles all the different new parts of her identity (she takes on the “Tal” mantle), the ship has now fully coalesced, with Saru as their leader. Let’s see what the future holds for them.