The Rick and Morty vibe takes a lot of getting used to, but there are glimmers of self-referential promise in the latest Star Trek adventure.

If there’s one overriding tenor to the CBS All Access/Alex Kurtzman era of Star Trek, it’s deconstruction. From the moral grey areas of Discovery to the dismantling of the Federation’s squeaky-clean reputation — and one of its most famous figures — in Picard, it appears that the New Trek we’re getting (and if Strange New Worlds is really happening, we’re getting more of it than we ever have before) is uniquely interested in breaking Gene Roddenberry’s vision apart to see whether it still holds up.

Now, we’ve got Star Trek: Lower Decks, the streaming service’s animation-for-adults spin on the franchise, a Rick & Morty-inspired barrage of inside jokes and frenetic pacing that threatens to make grumpy middle-aged hardcore Trekkies roll their eyes for Breaking Precious Canon. And yet, for all of “Second Contact”‘s deep flaws, there’s potential there, and one hopes that the remaining episodes of the season explores it.

Star Trek is no stranger to animation, though it’s been a while: after the cancellation of the original series, Star Trek: The Animated Series spent two scant seasons continuing the adventures of the U.S.S. Enterprise in the mid-’70s. Mike McMahan, a former writer and producer for Rick & Morty and creator of Hulu’s Solar Opposites earlier this year, is clearly a fan of the show (especially the Next Generation era) and throws in enough Easter eggs to satisfy even the most dedicated Memory Alpha scourer (more on those later). But there’s another source of inspiration, both in namesake and premise: the TNG episode “Lower Decks,” which followed a crew of young support officers who did the grunt work while the bridge crew ran off on exciting adventures week after week.

Here, we follow a similar cadre of junior officers and aspiring space explorers, this time on the USS Cerritos, which looks like if the Enterprise-D were kit-bashed with a sleigh. It’s one of the least important vessels in Starfleet, mostly occupied with “second contacts” — the boring, administrative work of bringing a society into the Federation after first contact. Still, despite the menial nature of the job, the crew loves what they do.

But we’re not here to follow the exploits of resolute Captain Freeman (Dawnn Lewis), or lantern-jawed Commander Ransom (Jerry O’Connell); instead, we zero in on Ensign Boimler (Jack Quaid, The Boys), a stuffy rules-hound with delusions of grandeur, and Ensign Mariner (Tawny Newsome), the resident “bad girl” of the ship. She’s a cool kid who doesn’t play by the rules, which you can see because she rolls up the sleeves of her uniform and keeps it slightly unbuttoned. In the show’s opening minutes, their dynamic threatens to be grating and derivative, Mariner as Rick to Boimler’s Morty.

As we sidle into the show’s first A-plot — a second contact mission where Freeman has assigned Boimler to keep a close eye on the troublesome Mariner for any infractions of protocol — the show flirts with some interesting interrogation of Starfleet’s mission (even as the follow-through leaves a little to be desired). Sure, Mariner acts like the Ferris Bueller of outer space (especially as she sneaks a container of farming equipment to some alien farmers who need it because damn the rules), but it’s revealed to be out of a sense of disillusionment with Starfleet’s buttoned-up bureaucracy. She’s been transferred and demoted between five different ships in the past year because no one knows what to do with her; she’s competent and motivated but dragged down by how stuffy everyone is. (The ep’s final minutes also reveal another potential reason for her rebellion: Captain Freeman is her frustrated mother.)

Meanwhile, two of our other entry-level explorers get introduced here: Ensign Rutherford (Eugene Cordero), a newly-minted cyborg engineer with an 8-bit eye, who stresses about his date with another young ensign before getting wrapped up in the space-zombie shenanigans. And there’s Ensign Tendi (Noël Wells), bright-eyed and bushy-tailed Orion medical officer. We don’t get a lot of room with them this time around, but their budding camaraderie over turbolift door malfunctions spells R-O-M-A-N-C-E in future episode.

For all of “Second Contact”‘s deep flaws, there’s potential there, and one hopes that the remaining episodes of the season explores it.

Still, the show’s blink-and-you’ll-miss-it pace can leave these subplots unmoored, especially as the rest of the episode gives way to a space-zombie plotline where most of the crew succumbs to a space disease that turns them into ink-vomiting rage monsters. The effects are suitably horrifying and grosser than old-school Trek could usually muster, but I wish it had its own episode rather than being squeezed into this introductory episode.

The show’s humor could use a little work too; as someone comparatively unfamiliar with the Rick & Morty experience, the show’s rapid-fire dialogue and frantic delivery is still a big pill to swallow, and not enough of the gags are riotous enough to really work. Quaid and Newsome have cute enough chemistry, but I’m looking forward to their personalities toning down just a little bit. Right now, the jokes lean too hard on treating Boimler like shit (including a humiliating stint in the suckling maw of a spider-cow) or treating creaky Trek references as jokes in and of themselves (did you know Spock came back from the dead?).

(Quick note about Mariner: her status as the snarky, casual-talking rebel in Starfleet is complicated a bit by the fact that a lot of the other members of the Cerritos aren’t all that far removed from her brand of casualness? How novel is a Starfleet ensign who talks like the office ‘cool guy’ when that’s, like, half the crew?)

For Trek purists, the aesthetic and tone take a lot of getting used to; the atmosphere is far more Rick & Morty than TNG, and if that’s not your speed, it might be best to drop out of warp now. Discovery and Picard have drawn a lot of fire for their sloppy storytelling and their fast-and-loose approach to canon (and rightly so), but Lower Decks is too harmless to approach from that perspective. It’s not going to break continuity, or ruin childhoods: it’s in its own orbit, taking a cheekier look at the drudgery of a Starfleet vessel, and in that respect, its subversions are hopefully a bit more palatable to the average Trekkie.

It’s fascinating to watch Lower Decks attempt Trek-as-workplace-comedy in animation, especially as The Orville does the same in live-action, from a creator (Seth MacFarlane) known for animation. In that respect, Lower Decks feels more deliberately comedic, given The Orville‘s quick pivot to “slightly-lighter TNG pastiche” in its second season. The results could still use a little shakedown cruise, but now that we’ve got the groundwork laid in episode 1, let’s see where Starfleet’s less-than-best-and-brightest take us. 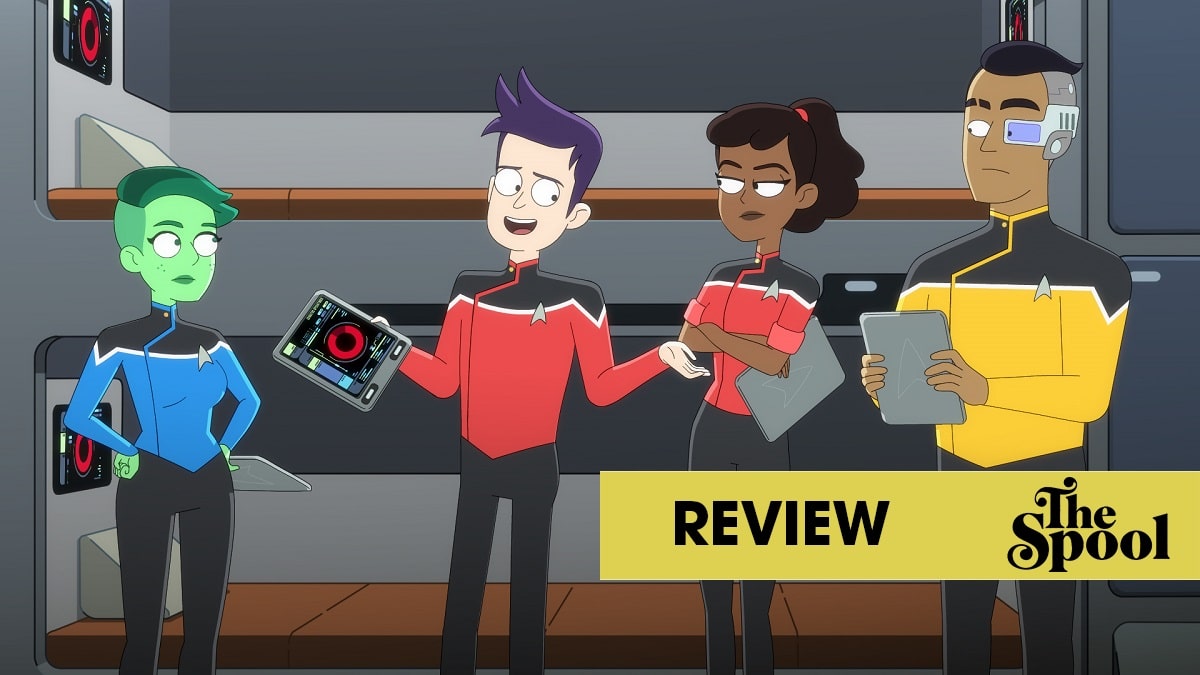 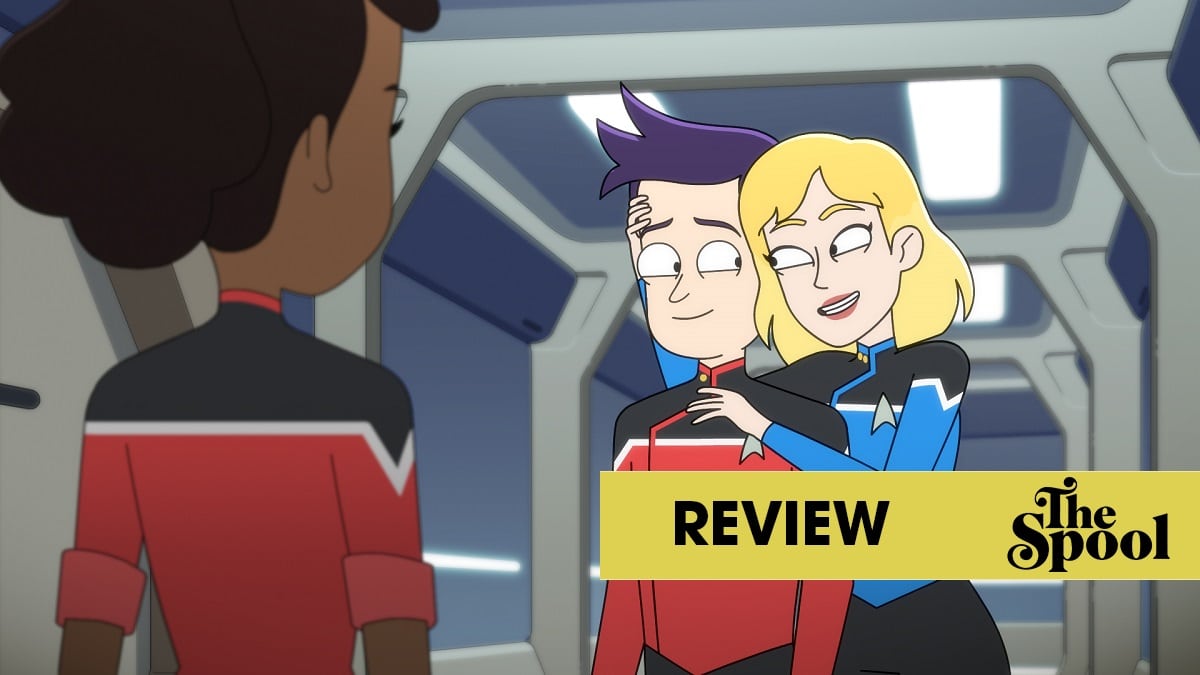 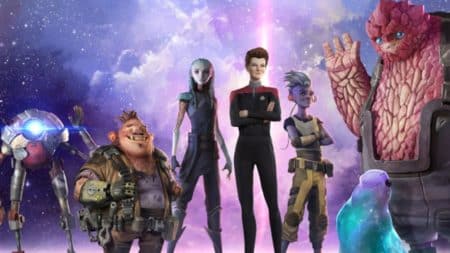