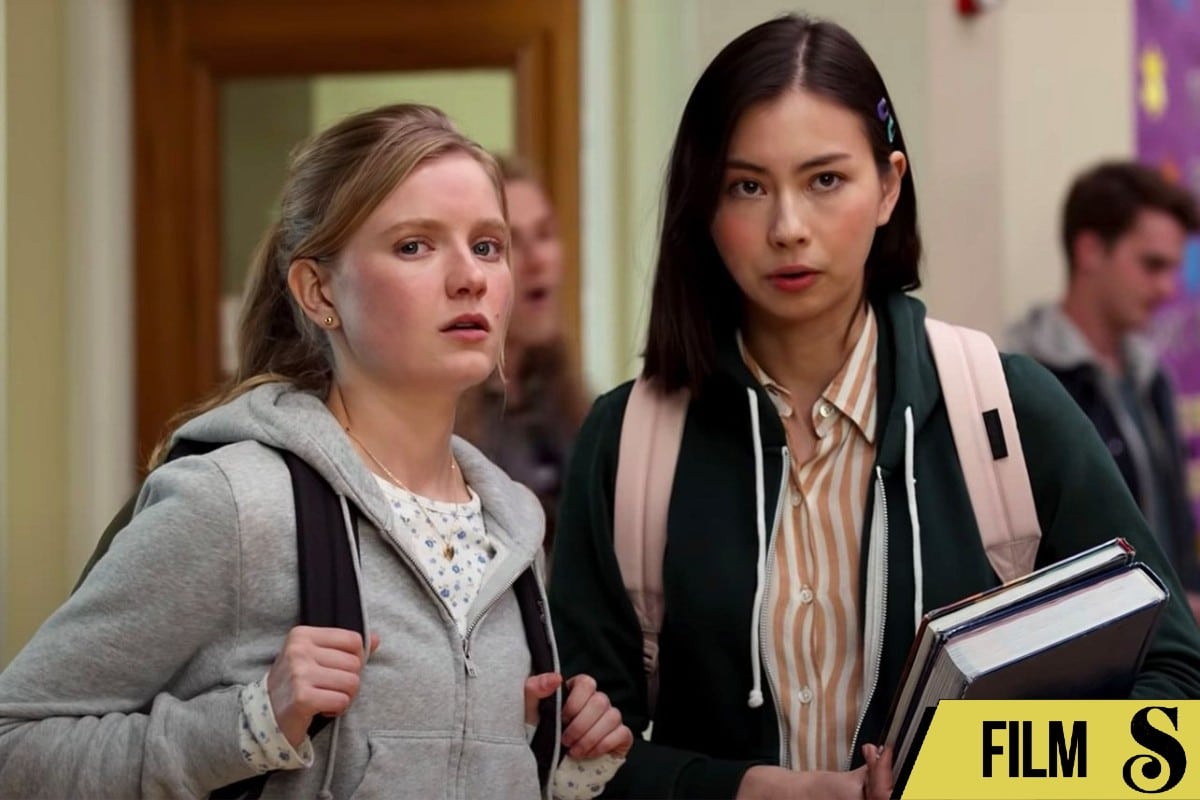 There’s a story from Tina Fey’s Bossypants where Fey recalls a moment between Saturday Night Live castmates Amy Poehler and Jimmy Fallon. Poehler was cracking jokes, and Fallon feigned mock horror and commented “It’s not cute. I don’t like it.” Poehler reacted with “I don’t fucking care if you like it.” Poehler brings that “riot girl” attitude to her new film Moxie, a film adaptation of the 2017 book by Jennifer Mathieu. Moxie is a fun revolutionary take on the high school movie, even if it takes a while to find its footing.

Moxie follows Vivian (Hadley Robinson), an introverted 16-year-old who starts to notice the toxic masculinity in her school. Inspired by her mother Lucy’s (Amy Poehler) past “riot girl” days, Vivian creates an anonymous zine called “Moxie.” Soon the zine has evolved into a feminist club, tackling school dress codes, double-standards between male and female athletes, and other sexist tentpoles holding up the patriarchy in their school.

There’s a lot to like about Moxie. The cast is inclusive, featuring portrayals of LGBTQ+, disabled, and racially diverse characters. It’s certainly the most progressive-themed of female-led teen comedies, evolving from the examination of high school social cliques of Mean Girls and the smart girls can party in Booksmart. Moxie even flips the roles in the high school movie tropes, portraying straight male Seth (Nico Hiraga) as Vivian’s confidante (he discovers her secret – she’s the creator of the zine) and an ally to the movement.

It is also refreshing to have a high school movie where the primary goal isn’t about turning an outcast ugly duckling into a socially accepted swan. There isn’t a makeover montage with a girl coming down the stairs to greet her prom date. The love between the characters is their friendships and finding a community that accepts you for you. The “Moxie” crew doesn’t want to fit into society’s view of acceptable teen girls, rather they want to change what’s deemed acceptable for teen girls.

Moxie is a fun revolutionary take on the high school movie, even if it takes a while to find its footing.

Moxie even weighs in on white feminist privilege. Vivian confronts her friend Claudia (Lauren Tsai) when she doesn’t fully participate in “Moxie” protests. Claudia, a daughter of Chinese immigrants, replies she doesn’t have white privilege to protect her like Vivian. While it’s great that Vivian gets to learn from this moment and reconnect with Claudia, their reconciliation feels a bit crunched for time since there’s much more patriarchy to topple before the movie ends. Of course, every revolution has a learning curve; it just feels like a missed opportunity to not sit with this moment a little bit longer.

Just as Moxie finds its footing, you feel that Poehler’s also finding her style as a director. Calling back to Poehler’s improv days, her directing style is that of a teammate on the back wall, watching the scenes unfold and waiting for the right moment to tap in and join the others. While it’s admirable to let the talented young cast drive most of the film, it does mean the scenes feel unfocused at times and could have used a nudge from Poehler to get back on track.

Poehler taps in and takes the reigns towards the climax of the film. The “Moxies” dial-up their angst, calling out the school when they receive an anonymous tip on a sexual assault that was ignored by the administration. You can feel both the actors and Poehler working together, building on that energy to take the ultimate stand against the patriarchy. Poehler should do more action films – she has a knack for leading a thrilling sequence, such as the “Moxies” leading a school walkout and holding a protest rally.

Moxie may have its ups and downs, but so does every revolution. It’s far from the cutesy teen rom-coms of the past, and rightfully so with Amy Poehler at the helm. It’s fun to spend some time with some rebellious feminist teens, all captured by Poehler. She always selects bold and exciting material for her films. Without a doubt, her style will continue to evolve. Let’s hope she shows us more of that confidence behind the camera in future projects to come.

Moxie is now available on Netflix.