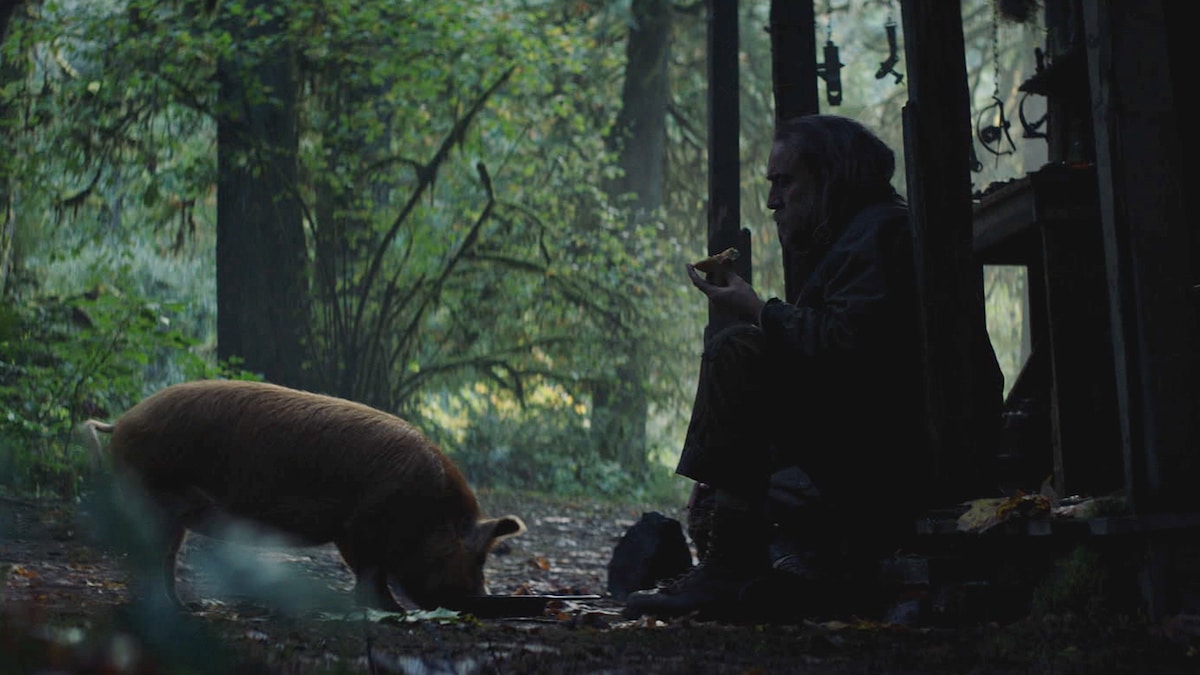 Michael Sarnoski’s feature debut is a slow burn about connection and commodification anchored by deeply felt work from Nicolas Cage.

The sense of rot in Pig is almost constant. There’s progression but no real growth for much of its short runtime, no feeling of true human connection through its first half. For a while, its empathy only comes from within. It comes within its hero; its intimacy only blossoms when there’s no one else to dry it from the roots up. The man in question is Robin (Nicolas Cage). He was a well-known chef but has since jumped ship, living in a shack in the Oregon wilderness and hunting truffles with his foraging pig. His only consistent human interaction is with a yuppie-type named Amir (Alex Wolff), but that’s strictly transactional.

Amir comes by in his Camaro once a week to buy Robin’s findings. He makes limp attempts at small talk; he buys, leaves, and resells the harvests throughout the Portland dining scene. However, one night a couple of drug addicts abduct Robin’s pig and, knowing Amir is his only chance at getting her back, he joins him back into the city. But this is Pig’s MacGuffin, not what it’s about. It is, against all odds, a wider parable about the decay of art in a culture where everything is to be bought and sold. Food is a major focus here, but everyone aside from Robin uses it to arrange, eat, and excrete, no real passion in sight.

No one else pays attention to the past. Amir’s only knowledge of the industry he’s in is about his father (Adam Arkin), the two of whom are already business rivals. A former colleague of Robin (David Knell) misremembers his own career, having abandoned his own ambitions in order to take the commercially viable route. Those who carry themselves as connoisseurs waste their efforts regurgitating buzzwords like “deconstruct,” “foreign,” “familiar,” and “traditions.” There’s but one moment where one person’s craft causes someone else to feel something, and yet they reject it outright. They can’t bring themselves to feel or care.

It is, against all odds, a wider parable about the decay of art in a culture where everything is to be bought and sold.

Perhaps this sounds like a polemic. Perhaps it is, at least in some regards. Writer/director Michael Sarnoski, who crafted the story with Vanessa Block, structures the film in something closer resembling a series of vignettes. And while those Robin and Amir come across get no more than a few minutes of screen time, there’s a shift in the central dynamic that acts as a narrative guiding hand. Thankfully, the relationship between the two isn’t particularly obvious. It’s not familial. It is, much like everything else here, too ephemeral to be what one would fully expect. Given the context at hand, it’s only fitting.

What begins as a begrudging respect shows a degree of understanding, if not deep connection. Wolff’s performance is refreshing in that he plays the role straight; he doesn’t hinge his performance on Amir’s pretentions, knowing those to be evident enough in the script itself. There’s a deep-seated loneliness that comes through in the role instead, not the least of which is guided by Cage’s work. Here, the actor lends one of his most understated presences to date, alternating his physical stoicism with a keen attention not just to how he interacts with his environments, but also to himself.

It’s he who helps anchor Pig down, from its droll bouts of humor to the cynicism boiling up from within. The dried blood on his face, the waves of black and white in his beard—the dynamism of his face flows like watercolors. As the film progresses, Robin starts to sink. It’s not necessarily that he becomes desperate, but he becomes more accepting. He, having reentered the world for the first time in over a decade, knows his limits. He knows the limits of his passion, and he knows how small of a place it has here. What once were museums to him—the restaurants, the kitchens, the diners—are getting simpler. If only they weren’t getting safer.