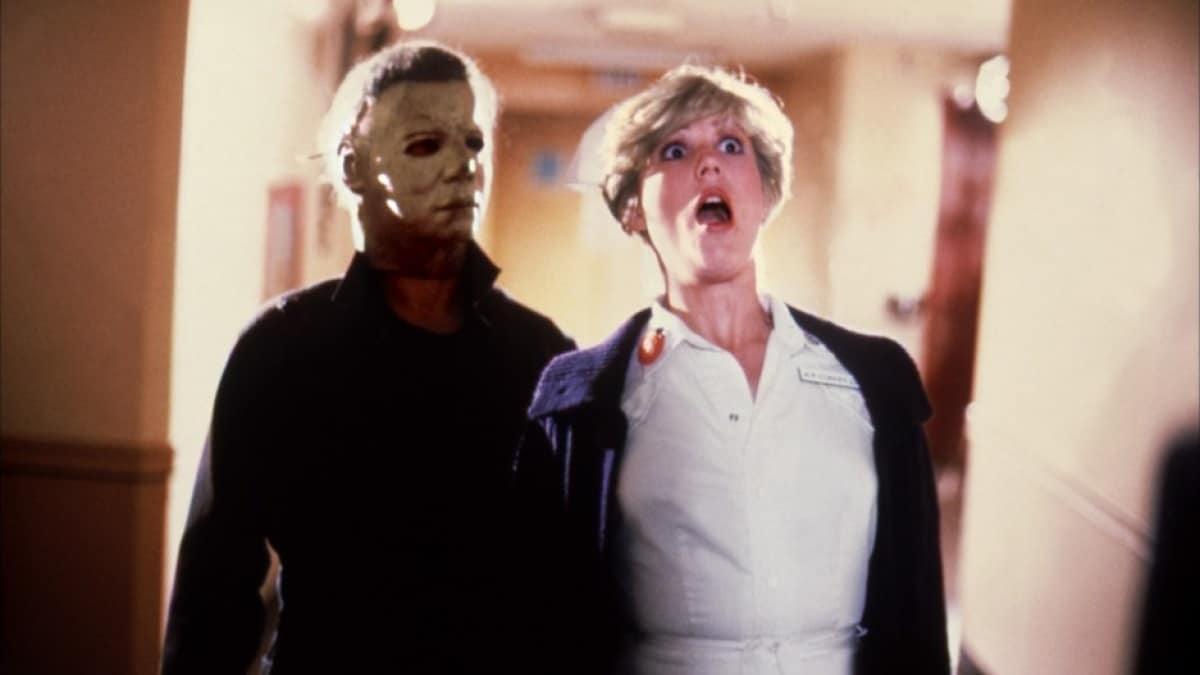 The 1981 sequel may be better than many of its successors, but that doesn’t make it good.

If Universal released Halloween II under virtually any other name—The Hospital Murders or ICU or even Leo Rossi’s Bare Ass—it would most likely be remembered today as just one of countless early ’80s mad slasher films to hit theaters. And that’s despite being made with a little more style and technical finesse than most of its el cheapo competition. You know, the kind of film that might one day receive a semi-special edition Blu-Ray from Shout Factory to satisfy its mild fan base.

However, as a continuation of the original groundbreaking masterpiece, it cannot be seen as anything other than a profound disappointment unimproved by time. Even worse, in its feeble attempts to extend a story that ended so perfectly, it would commit two fatal artistic errors. One would continue to disrupt the franchise for decades to come until David Gordon Green decided to retcon it and all subsequent sequels out of existence in his crummy Halloween (2018) franchise reboot. The other Green would inexplicably choose to replicate in his crummier Halloween Kills (2021).

To make matters worse, these errors came not from cloddish nobodies who lucked into the project without having any feel for what made the original film so special in the first place. No, it was John Carpenter and Debra Hill, the very people who made the first one—he directed, she produced, and they co-wrote the screenplay—behind them.

To be fair, neither was particularly keen to make the film in the first place. They correctly believed that the story they wanted to tell had concluded, and there was nowhere else to go. However, they realized that someone would make it with or without them, So, they decided to come back to write and produce for presumably hefty paydays. Their participation drew back most of the key players, including actors Jamie Lee Curtis and Donald Pleasance. Even cinematographer Dean Cundey returned, passing on shooting Poltergeist (1982).

There was an initial idea of setting the film five years after Halloween with murderous Michael Myers pursuing survivor Laurie Strode to her hi-tech Chicago apartment–shades of Carpenter’s 1978 TV movie Someone’s Watching Me). Instead, the film opens almost exactly where its predecessor left off—Michael (Dick Warlock) disappearing into the night after surviving being shot six times by his psychiatrist Dr. Sam Loomis (Pleasance) and falling off a balcony.

As Michael skulks through the plentiful dark alleys of Haddonfield, Laurie lays, drugged, in a hospital bed. Loomis prowls the streets along with Sheriff Brackett (Charles Cyphers), inadvertently causing the death of a teenager he mistakes for his prey. Loomis and Brackett’s failures allow Michael rather quickly to reach the hospital. There he slaughters the oddly underpopulated staff in oddly underlit halls and rooms using such implements as a scalpel, a scalding therapy tub, and a hypodermic needle to the eye.

If Halloween II has a slightly better reputation than most subsequent franchise entries, that says more about their lousiness than II’s intrinsic worth.

But why? Why would Michael be so dedicated in his pursuit of Laurie, someone he presumably knew nothing about until he happened to see her as she was walking home from school with her soon-to-be-late friends earlier that day? The original film never answered that question because it didn’t need to. He was simply a force of implacable evil. To ascribe any rationale to his behavior would not only be staggeringly ineffective, but it would almost cheapen what had come before.

Nonetheless, in a move likely borne out of a combination of artistic desperation and too many beers, Carpenter decided to not only give Michael a motive but the hackiest one imaginable. Laurie is his heretofore unknown little sister adopted by the Strodes after her and Michael’s parents’ deaths. Even if you factor out the utter implausibility of it, it fails as an idea. It takes something inhuman and unknowable and renders it all too knowable. To Carpenter’s chagrin, this bonehead idea would wind up being the underlying motif of every subsequent Halloween film (save for the gloriously wacko in-name-only sequel Halloween III: Season of the Witch). Only Green discarded the idea, going as far as to make a joke of it at one point.

And yet, the screenplay makes an equally dimwitted decision to effectively sideline Laurie. This choice takes another thing that made the first film so memorable and gutted it in a manner as messy as anything Michael does to II’s array of nurses. Halloween took pains to make Laurie anything but the typical horror film heroine who does little other than strip, shriek, and wait for the hero to arrive and save her in the nick of time. Instead, she was sharp-witted, (except for dropping the damn knife), funny, resourceful, and so likable that audiences rooted for her survival without hesitation.

Here, the script spends so much time following Loomis on his pursuit and Michael hacking up his largely anonymous array of victims that Laurie feels like an afterthought at times. She is either unconscious, weeping, or stumbling through the deserted halls trying to evade Michael when it does throw back to her. Curtis had more to do in her brief turn in the lamentable Halloween Resurrection (2002) than she does here. Plus, in Resurrection, she didn’t have to sport the awful, awkward-fitting wig she does in II. Bizarrely, Green leaves Laurie uninvolved in almost exactly the same way in Halloween Kills, albeit with better hair.

Carpenter obviously never planned to direct Halloween II. Instead, the gig landed with first-timer Rick Rosenthal, although rumor had it David Lynch had received consideration. After shooting concluded, Carpenter decided it didn’t work. Even though the original film was remarkably light on blood, he felt it needed a higher quotient of the red stuff. So he reshot some scenes and added a couple–such as the weirdly unrelated murder of that teen girl in the beginning–to up the gore factor.

This move may have made some subscribers to Fangoria happy but adds nothing of value to the film as a whole. It does lead to the one undeniably amusing moment, though. A blandly handsome EMT (Lance Guest) slips in a massive pool of blood and gives himself a concussion.

Halloween II just misfires on every level. Although Cundey continues the visual motif he established with the first film, the drab hospital walls are not nearly as evocative as what he made of an ordinary suburban neighborhood under the cover of darkness. While Carpenter’s additions may strike some as heavy-handed meddling, Rosenthal can never generate anything that resembles genuine suspense at any point in the proceedings. The performances are not good—Curtis spends her time in a fog, Pleasance overacts even by his standards, and the newcomers are undeniably anonymous. The grand finale is big and bloody and noisy as can be, but by the time it comes around, no one watching will give a shit about any of it.

If Halloween II has a slightly better reputation than most subsequent franchise entries, that says more about their lousiness than II’s intrinsic worth. It’s a stunning drop in quality. While it would prove to be a hit at the box office, it dealt the franchise a death blow from which it still hasn’t recovered. At least with the Friday the 13th franchise, the crappy sequels didn’t hurt quite as bad as the original film, while effective, was not exactly a work of greatness either.

In Halloween, you will recall the moment where Sheriff Brackett accidentally frightens Laurie and remarks, “It’s Halloween. Everyone’s entitled to one good scare.” Unfortunately, Halloween II never quite manages to follow that advice. We have been the poorer for it for 40 years and counting.

Halloween II visited these halls 40 years ago THIS VERY NIIIIIIIIIIIIIIGHT! 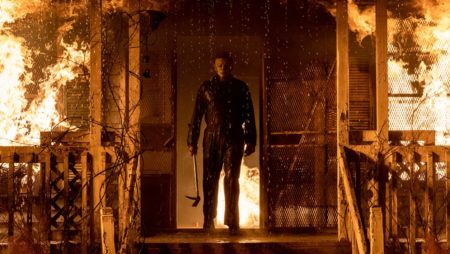 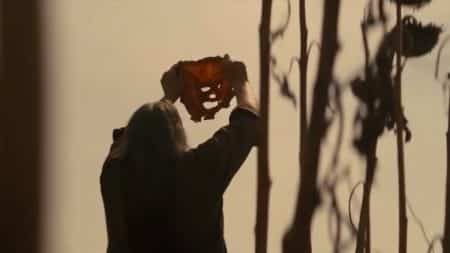 Texas Chainsaw Massacre is made for modern times, & not for the better 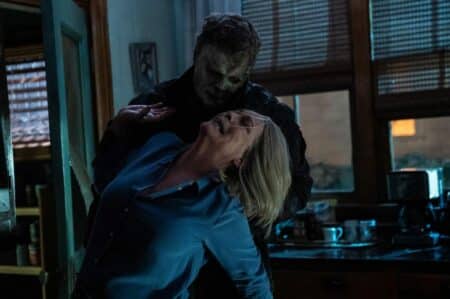