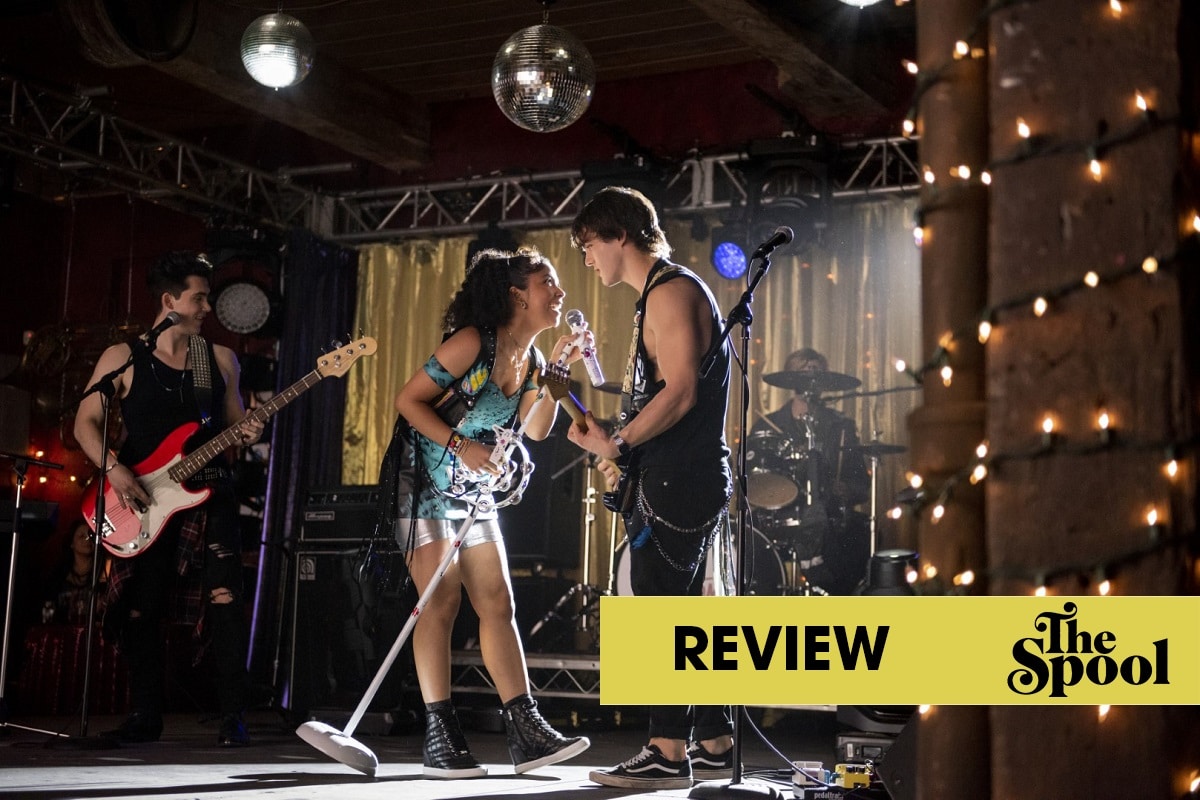 Netflix creates a high-school musical about a ghostly boy band that plays all the wrong notes too obviously.

Based on a Brazilian Nickelodeon show, Julie and the Phantoms concerns a high school girl named Julie (Madison Reyes), who’s grieving the recent loss of her mom. Her sorrow’s gotten so bad that, despite being an aspiring musician, she’s dropped out of her school’s music program. But she gets a renewed interest in the world of music when she encounters a trio of ghosts: Luke (Charlie Gillespie), Alex (Owen Joyner), and Flynn (Jadah Marie). In life, they were the members of the up-and-coming boy band Sunset Curve in 1995. Then, some bad hot dogs sent them to the grave. Now, they have a chance at the ultimate comeback by making songs with Julie.

Julie & the Phantoms sounds like it would be either a Hanna-Barbera cartoon or a show that would air directly after Poochinski. Despite the zany starting concept, Ortega’s show fixates too much on treacly emotional scenes. The writing of these poignant moments is truly awful, clobbering the audience over the head with what they’re supposed to be feeling.

One great example of this comes in the show’s sixth episode, “Finally Free.” Here, Julie discovers that Luke regularly visits his still-living parents. All the while, Luke’s bandmates narrate exactly what Luke through on-the-nose exposition: “He never got the chance to make up with them,” Alex says solemnly.

Accompanying their observations is a score that suffocates the scene with sentimental music. The whole scene is like somebody trying to get you to cry by cutting up onions with a chainsaw. It’s loud and messy rather than moving.

The songs themselves aren’t much better, all of them plagued by an issue familiar to anyone who’s listened to modern musicals like The Greatest Showman. They’re more fit for pop radio than a musical; the creative concept of a ghost boy band does not yield similarly unique melodies. Take “Wake Up”, the ditty that concludes the first episode: as Julie belts out the songs refrain of “So get up, get out, relight that spark”, I struggled to see how the lyrics reflected Julie’s personality. The generic lyrics make the tune sound like a discarded Sia anthem more than a musical number specific to the show.

A subsequent song in the second episode, “The Band Is Back?”, isn’t much better. Our corporeal boy band repeats phrases like “Can you hear me?” and “The band is back!” over and over again. All the while, there’s nary a single reference to the fact that the singers are, y’know, ghosts. Why even make a show such a weird premise if you won’t take advantage of it? At least Cats wasn’t afraid to make songs related to feline activity! The more bombastic “I Got the Music” opens the fourth episode doesn’t improve much, but at least it’s actually a full-fledged musical number — with dance choreography and everything!

Restraint defines the execution of many songs in Julie and the Phantoms. Undead bandmates performing in a concert or, in the case of “Wake Up,” Julie just sitting behind a piano as she sings. By contrast, “I Got The Music” has an elderly tap-dancing janitor, kids leaping off of lockers, and backup singers who dress like furries.

A later musical number, “Perfect Harmony,” which sees Julie and Luke serenading together on the set of the “(Everything I Do) I Do It For You” music video, similarly thrives on throwing caution and realism to the wind.

The writing of these poignant moments is truly awful, clobbering the audience over the head with what they’re supposed to be feeling.

Really, whenever Julie and the Phantoms gets weird, it gets better. An extended scene with Alex and Will (Booboo Stewart) going on a date to an art museum so they can skateboard and scream? There’s a cute energy to it and a sense of specificity!  The reveal that there’s a Hollywood club for ghosts deserves kudos for creating some strange lore for the undead.

Unfortunately, those glimpses of originality are the exception rather than the norm, since Phantoms is all too happy to trade in tediously familiar territory. Julie’s schoolyard nemesis, wannabe pop star Carrie (Savannah Lee May), is just Sharpay crossed with Darla Dimples. Julie’s struggles related to the loss of her mom proves all too familiar whenever the show even remembers that part of her character even exists.

And then there’s the comedy, which is so stilted I’m shocked it’s not accompanied by a canned laugh-track. Lame outdated references to Justin Bieber and Jar-Jar Binks and the ghost puns just go on and on. “I’ve got ghost bumps!” “I want my first haunting to be special!” That’s what passes for wit here in a show that’s always hitting comedic sour notes.

Considering the cliffhanger-y nature of the first season’s finale, it’s clear Julie and the Phantoms intends to run for a long while. Based on its subpar first season, though, it’s doubtful viewers will be asking for an encore.

Julie and the Phantoms apperates on your Netflix screens July 10th.

Julie and the Phantoms Trailer: