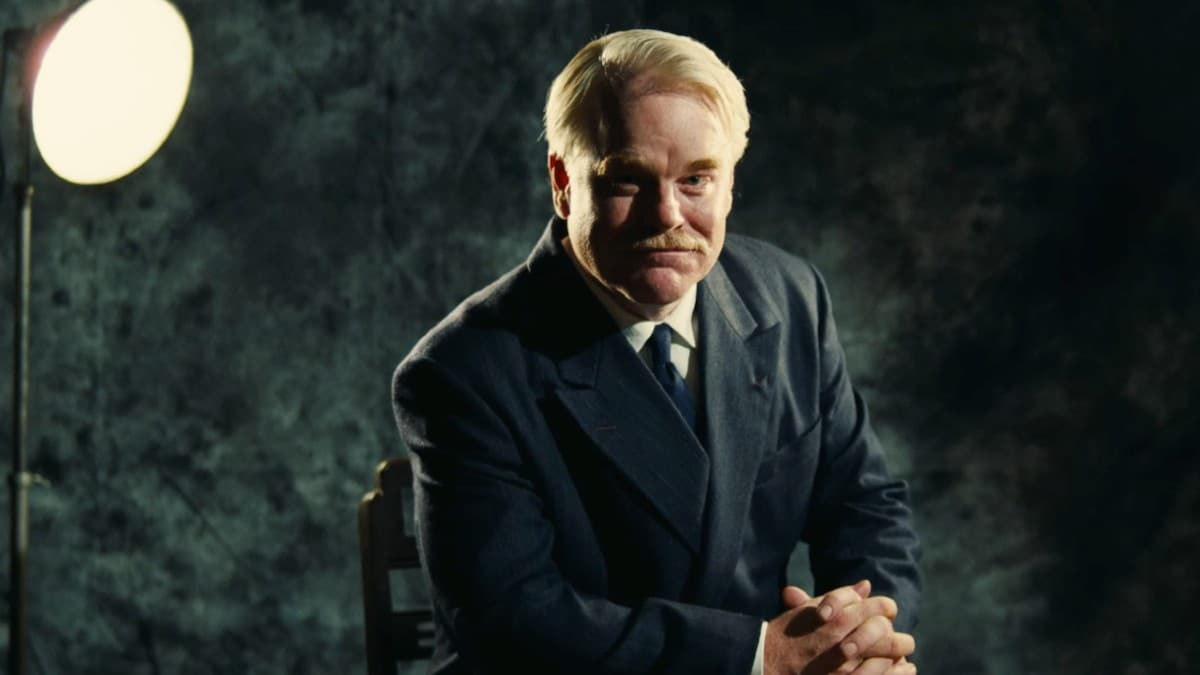 Even after the umpteenth re-watch, I feel I’m only starting to scratch the surface of Paul Thomas Anderson’s The Master. Initial reviews and reactions gravitated towards the film’s relationship with Scientology and its co-founder L. Ron Hubbard. In the decade since, this fixation has dissipated, depriving confused viewers of an easy handhold while scaling this towering cinematic achievement. Make no mistake: Philip Seymour Hoffman’s Lancaster Dodd is a character clearly inspired by Hubbard. But labeling The Master “a movie about Scientology” is about as silly as thinking you can cure leukemia by accessing past lives.

Of course, that’s exactly what Dodd claims he can do. “I do many, many things. I am a writer, a doctor, a nuclear physicist, a theoretical philosopher. But above all, I am a man,” he says as he introduces himself to Freddie Quell (Joaquin Phoenix). Freddie’s a jack of all trades too: in the opening fifteen minutes, we observe his worth as a photographer, mixologist, and able-bodied seamen – though he lacks Lancaster’s need to impress those around him. Push past the masterful (pun intended) and confounding storytelling, and you’ll find a movie about the relationship between these weird guys, two halves of a split saber.

Of all of Paul Thomas Anderson’s troubled male protagonists, Freddie may be the most messed up, a shell-shocked sailor on the cusp of madness. We first encounter him on a beach, somewhere in the Pacific during the last days of World War II. Post-VJ-Day, he drifts around California, from the floors of a department store to the shacks on the edge of a cabbage farm. One night, purely on impulse, he stows away aboard a luxury passenger ship.

He meets Dodd in the morning. Bearing a bushy mustache, Hoffman immediately dominates the frame, his red robe sneaking into Freddie’s single shots. From their first scene together, there’s a clear tension between Phoenix and Hoffman’s performances. The younger actor’s physicality is intensely expressive, and always off-putting. Phoenix leans and hangs on the doorway to Dodd’s cabin, talking in short phrases mainly out of the left side of his mouth (Freddie’s upper right lip appears paralyzed). Hoffman maintains a very still composure, speaking with authority, never giving much away.

But Dodd is also a showman, a creature defined by his power to charm and impress. After all, The Cause – his cause – is built on his charisma. Hoffman nails the jovial, faux-inspirational delivery of early lines like, “leave your worries for a while, they’ll still be there when you get back” and “we fought against the day, and we won.” He starts out like a “hang in there” poster come to life, but as The Master unravels, knots begin to appear in Dodd’s psychology. Does he really believe his own babble? And why’s he so fixated on Freddie?

Frankly, it was about time Anderson and Hoffman put their heads together to create a character of this intricacy and ambiguity. Previously, PTA played to Hoffman’s efficiency, using his actor’s talent to establish and pay off minor parts, quickly. “Untitled craps player,” “Phil” and The Mattress Man are great, but they’re all supporting, relatively straightforward roles. Scotty J. is plenty complex, but he doesn’t have more than ten minutes of screen-time in Boogie Nights. Lancaster Dodd, on the other hand, cannot be sidelined. Instead of filling in secondary outlines, so much of The Master relies on Anderson and Hoffman’s collaboration.

P.S.H. had to embody an enigma, which is nothing he hadn’t done before. Doubt rested on Hoffman’s ability to generate uncertainty, a part he pulled off in spite of the cookie-cutter world around him. But as odd as it may sound, P.S.H.’s performance as Truman Capote marks a closer point of comparison. Hoffman’s Capote was an ambitious actor preparing for the role of a lifetime, a guilt-ridden researcher almost ready to express another psychology. We find Dodd further along but engaged in a similar process. He cast himself in the part of “Master” years before he met Freddie, a role he now lives in. His cult depends on his performance.

His acting isn’t flawless: the moments in which his mask slip are some of The Master’s most memorable. During that early voyage at sea, Dodd enjoys total control of both himself and the people around him. But once The Cause makes landfall, he must demonstrate his practice of time-travel processing to a wealthy benefactor – a presentation that falls apart when an insolent party guest questions Dodd’s science. The Master attempts to keep control of the room and his anger, but he can’t. Yelling “Pig Fuck!” at your enemies might embolden your supporters, but it won’t convert any skeptics into believers.

This rage doesn’t stem from a feeling that his “beliefs” are being insulted, but because Dodd is bound by a need to maintain. His teachings of processing and past lives exist to create a power structure, one atop which he sits. Dodd believes in his methods… as a means of manipulation and coercion. But when we see him address to his supporters en masse, Hoffman conveys an emptiness that can only come from his character’s awareness that he has made up that which he preaches.

Being “Lancaster Dodd,” comes at a price, one frequently represented by Dodd’s relationship with his wife, Peggy (Amy Adams). The Master rarely shows us Dodd and Peggy alone – these scenes are the rare formal break from Freddie’s perspective. Both in the sole company of her husband or in front of others, Peggy’s a true believer – she knows Dodd’s writing better than he knows it himself, she knows his desires even before he’s even acted on them. He may not be the perfect cult leader, but she is the perfect cultist. For Dodd to reject her, he would be a fraud.

“I’m in love. I’m in love, we’ve all been in love,” he tells his supporters in the same hollow tone. Dodd never seems too happy when we see the pair in private: determined, sexually dominated, but never joyful. It’s certainly nothing next to the fun we see him having when Freddie’s around. He’s warped Peggy’s perspective to the point that she’s now one step ahead of his own. But Freddie, in all his wild glory, is potential proof that the powers of “The Master” are truly limitless, that Dodd can mold even the most wounded and defiant mind into a stable foot soldier. Of course, he fails.

It almost feels wrong to put Dodd into such blunt and clear terms. Can the layers of his thought processes really be pulled back? Hoffman and The Master produce a very complicated person, one who is actively trying to hide a lot of these complexities. Hoffman is able to articulate Dodd’s coherent psychology without compromising his allure – we see the “on-stage” Dodd, and we are also able to infer an “off-stage” Dodd that fits with what we’ve seen.

I feel the same way about Philip Seymour Hoffman.

As I close this year-long exploration of his filmography, I feel profoundly sad. I’ve become intimately familiar with Hoffman’s screen presence and the choices he made as an actor. I’ve done my best to shed new light on his achievements, and to find the words that measure up to his work. But I never met this person. I was never even able to see him perform on-stage.

A few months ago, as I was starting to write about Hard Eight, I was doing some digging into Anderson’s upcoming Licorice Pizza. I stumbled on a set photo of Hoffman’s son, Cooper, who will be starring in the film. It was a picture I’d seen before. But this time, I just started crying.

Finishing P.S.H. I Love You means accepting his death – there are no more performances left for me to write about.

Philip Seymour Hoffman is more than mere fodder for a writing project. He was a father, a husband, a collaborator, and a friend. His son looks so much like him. Cooper was so young when his dad died. I’ve gotten used to having P.S.H. in my life in this weird, weekly viewing capacity. The sense of loss that I feel reaching the end of my little column is insignificant next to what Hoffman’s family and friends must feel, what they must have been feeling for the last seven-and-a-half years. What right do I have to cry over his death?

But I wouldn’t be feeling this profound sadness right now if Hoffman wasn’t able to bring such life to his work on-screen. I’ve heaped so much praise upon this performer: whether he was robbing his parent’s jewelry store or proclaiming his horniness in an elevator, plunging the depths of creativity, or grooving to Iggy Pop, Hoffman constantly pushed himself to find the fullest version of his character. Finishing P.S.H. I Love You means accepting his death – there are no more performances left for me to write about. Perhaps that’s why I’ve gotten so behind schedule.

As much as I’d like to get him on a slow boat to China, I can’t drag this out any further. No matter how much he sings, Dodd can’t make Freddie stay. Their partnership has come to an end.

It’s okay. Maybe in the next life.

Licorice Pizza, a collaboration between his eldest child and a close friend, is proof that P.S.H. is not gone. I hope this column is, too.