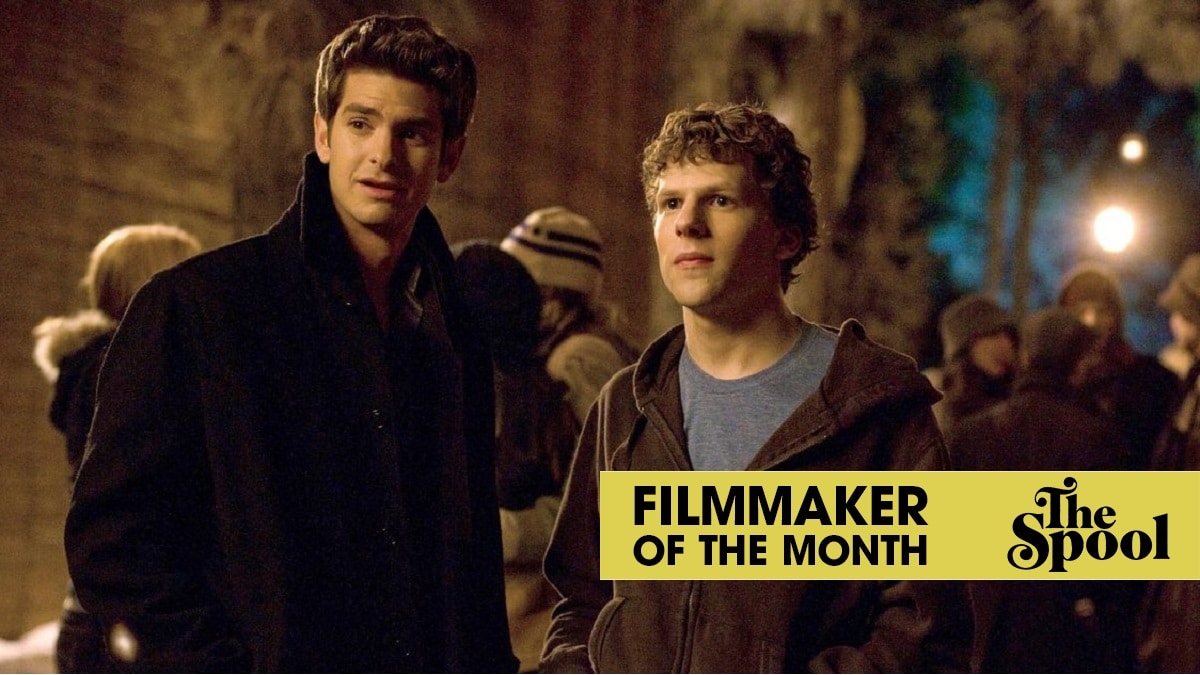 When The Social Network premiered on October 1, 2010, Facebook had only existed for six years. It already had 400 million users. Its founder and C.E.O., Mark Zuckerberg, was worth $4 billion.

Adapted by Aaron Sorkin from the book The Accidental Billionaires by Ben Mezrich, The Social Network follows the early rise of Zuckerberg (Jesse Eisenberg) after starts Facebook from his Harvard dorm room following a memorable breakup. The script is written around a series of legal depositions where Mark is sued by his former best friend, Eduardo Saverin (Andrew Garfield), and the crew rowing Winklevoss twins (both Armie Hammer) for stealing the idea behind the website.

At the time of the movie’s release, it comes off as a coming-of-age story about a boy genius that sadly loses his friends and loved ones for the noble pursuit of sticking it to the old regime of rich businessmen and their rich children, who run the world. This punk kid rewrites the rules of business, technology, and the way we interact with each other in this young millennium.

A decade later, it plays more like a supervillain origin story. It’s There Will Be Blood if Daniel Plainview was a dweeby computer programmer who drank lots of Mountain Dew. Instead of selling oil, it’s sensitive user data. Sorkin’s script tries to dig for the psychological well behind Zuckerberg’s decisions, but it’s mostly interested in the process of creating a new kind of industry from the ground up, with its scenes about investor meetings and all-night coding sessions that have the same energy as a frat party. It’s not until the script goes through director David Fincher’s brain and comes out on the screen where we see the dark underbelly of who this guy is.

Fincher can direct anything and at least make it interesting, but the special sauce that makes The Social Network stand out from the rest of his filmography and find itself on every Best of the 2010’s list isn’t the zippy Sorkin script, or Eisenberg’s brilliant, skin-crawling lead performance. The secret ingredient that brings the movie from a million-dollar idea to a cooler billion-dollar idea is the soundtrack. Not just the iconic score from Atticus Ross & Trent Reznor, but the singular use of already existing songs.

It’s strange to give a director so much credit for music and song choices. It’s not like Fincher was in a recording studio editing ambient chaos together or making spooky covers of popular songs, but it’s his vision and excellent choice of collaborators that bring everything together to create a mystique the movie still has over us.

That power first took hold when the second trailer dropped on July 16th, 2010. After Sony showed Fincher their own edited trailer, featuring Beastie Boys’ “Sabotage,” the director knew that it wasn’t a good representation of his film. He decided to go with trailer editor (and auteur in his own way) Mark Woollen’s version. Before this trailer, which features a somber, slowed down children’s choir cover of Radiohead’s hit song “Creep” playing over images of photos, friend requests and status updates, The Social Network was thought of as “that Facebook movie.” After the trailer, we knew we were in for something heavier.

The “sad pop song” genre of movie trailers has become such an overwhelming cliche that I can’t even tell if it’s a joke or not, but in 2010, it was a fresh idea. It also immediately puts audiences in the alienating headspace of the film’s protagonist. The song itself, which you’ll be lucky to hear live since the band rarely performs it and have distanced themselves from over the years, is written from the perspective of a man who gets off on following a woman who he’s attracted to but doesn’t have the confidence to ask out.

It’s a dystopian nightmare that the filmmakers may not have predicted, but the soundtrack definitely did.

This isn’t too far off from the Zuckerberg portrayed in the film. The genesis of Facebook happens when his girlfriend, Erica (Rooney Mara), dumps him. Mark takes the breakup like any non-sociopathic human man does and creates a site called Facesmash that compares pictures of women who attend Harvard and all the neighboring schools. He also sexually harasses Erica by negatively writing about her looks and sharing private details online, a tactic that’ll sadly be used by lots of creeps over the next decade.

Many, many, many films have attempted this kind of trailer since, and besides some notable exceptions, they mostly miss the point. The Social Network trailer still holds up because Fincher and Woollen use it as a pre-show for the main event. It shows the aesthetic flavor of the movie, while also preparing us for spending time inside the psyche of a problematic character.

Over the course of making a film, a director has to make about 1 million decisions a day, and any of them can make or break the movie. Fincher is a great director because most of the decisions he makes are the right one. Perhaps the best decision was choosing an unassuming piece of music from his composers, Ross & Reznor named “Hand Covers Bruise” as the main theme of The Social Network.

This is Ross & Reznor’s first film score, and at first, they felt over their heads. After screening an early cut of the movie, Reznor told Variety, “It’s constant dialogue. How do you write music for a scene where someone turns the corner and goes down the stairs and it’s eight seconds? I’m not even sure how you even start on that.” But after taking some breaths, they decided to approach it by playing to their strengths, similar to how Zuckerberg gets around the super exclusive clubs at Harvard that want nothing to do with him by using his strengths to create his own exclusive club in the virtual world.

Holed up in a tiny but cozy studio, Reznor would experiment and treat it as a live performance, or “as something that’s pulled out of the ether,” according to a Los Angeles Times interview. Once he was finished recording, Ross would then go through it all, editing and arranging it into something coherent. They didn’t record anything with a specific scene in mind, but instead approached it like an album, with a script instead of lyrics and Zuckerberg’s journey instead of their own lives.

When they sent Fincher a few tracks to listen to, it was “Hand Covers Bruise” that immediately caught his attention, and for good reason. If we ever wanted to transmit something into deep space to teach aliens what humanity sounded like in 2010, it would be this. Using mostly modular synths and acoustic pianos, it’s music that sounds like a slow-motion panic attack, or if the twinkly piano in Nick Drake’s “Pink Moon” had a nightmare.

As James Rettig writes in an excellent piece for Stereogum about the 10-year anniversary of the soundtrack, “Fincher and Sorkin made a story about a character that viewers could almost empathize with; Reznor and Ross’ score seems, purposefully or not, to act in opposition to that. It constantly sounds as if the world of the film is on the precipice of disaster, which turned out to be accurate.”

It becomes a haunting motif throughout the film, used for the important turning points of Mark’s life. When the song kicks in immediately after Mark and Erica’s breakup, the film goes from “a college movie about kids making stuff and screwing each other over” to a darker, lonelier place, according to Reznor in a behind the scenes featurette.

Each time the piece returns, it sounds more frayed, like it’s falling apart at the seams. They achieved this gradual decline by recording close to the piano to make it sound fuller and richer for the opening of the film, and each time the theme reappears the piano is recorded further and further away, “like a memory of who he was at the beginning. Like a memory of childhood,” says Fincher. The rest of the score is a nerve-wracking, twitchy masterpiece worth a full discussion, but it’s “Hand Covers Bruise” that’s the emotional core of the soundtrack. It’s also the gateway drug that lets Academy voters give the Oscar to one of the weirdest scores to ever receive the honor.

Fincher has a proven track record of ending films with a great song, but he doesn’t get enough credit with using The Beatles’ “Baby, You’re a Rich Man” in the closing scene. It’s not in the top 50 of most peoples’ favorite Beatles songs, and it’s sandwiched between much more famous tunes on the Magical Mystery Tour album, but in the film, it’s used like a knife to the gut. Using a major studio’s money to license a very expensive Beatles song to dunk on a sad, lonely billionaire may be Fincher’s most punk rock move as a filmmaker.

The song, a combination of two different songs by John and Paul smashed together, perfectly sums up the state of Zuckerberg’s mind as he sits alone in a conference room, now the world’s youngest billionaire, refreshing his own Facebook page over and over to see if Erica will return his friend request. Eisenberg shows no emotion on his face as he stares at his computer, but when Lennon sings, “How does it feel to be one of the beautiful people?” we have an idea how the morally bankrupt Zuckerberg would answer the question.

We’ve just passed the 10-year anniversary of the film. Facebook now has 2.7 billion users, and the company is worth $720 billion. Mark Zuckerberg is now worth over $100 billion. We also now face the consequences that unchecked social media empires can have on a society that’s increasingly alienated and fearful of each other. It’s a dystopian nightmare that the filmmakers may not have predicted, but the soundtrack definitely did.