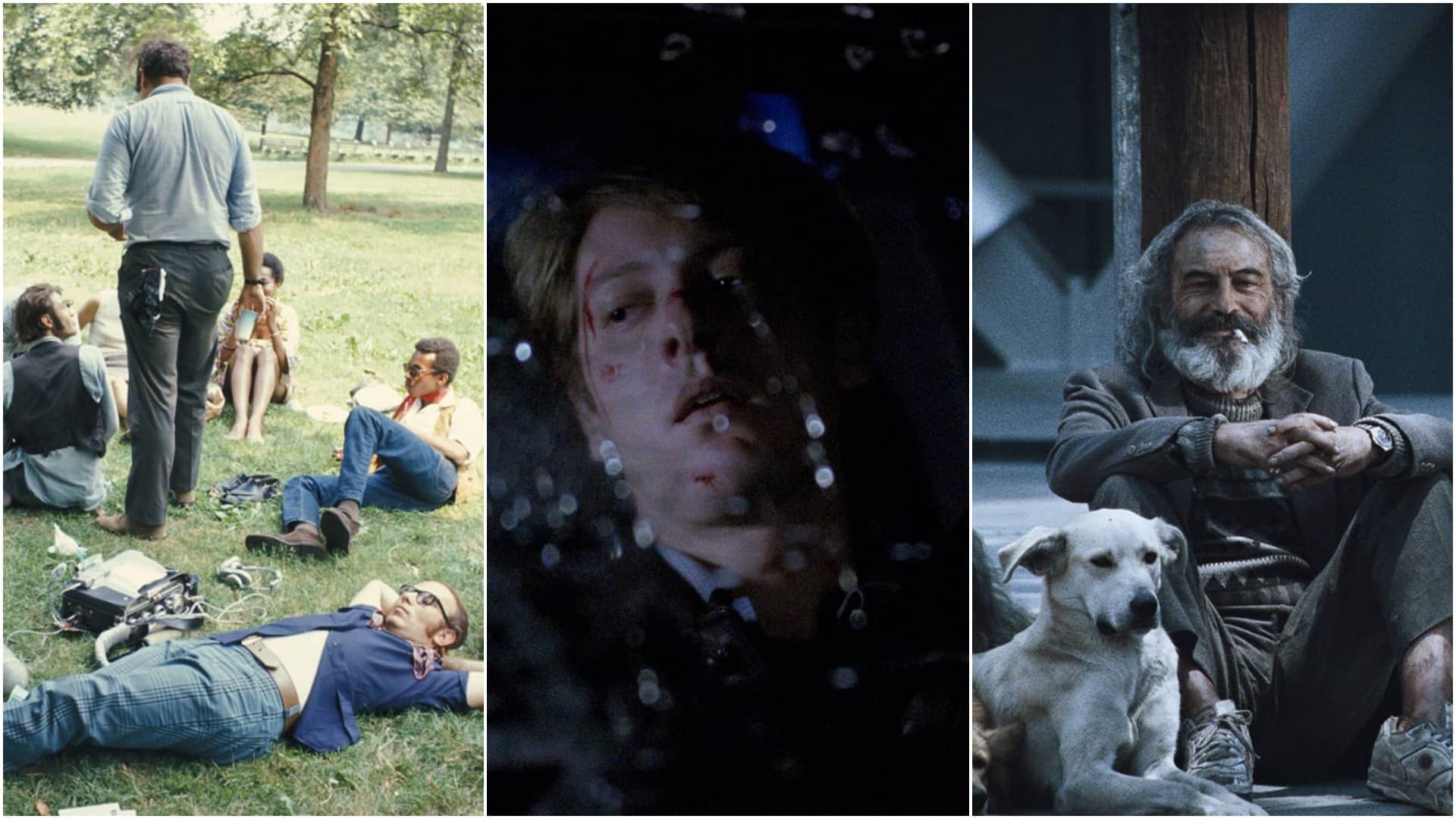 Fiction/doc hybrids are a little more normalized now, but Bill Greaves‘ 1968 curio Symbiopsychotaxiplasm: Take One is a one-of-a-kind meta-meta-metanarrative that still feels revolutionary. It’s a doc within a doc within a doc, whose true purpose is obfuscated and obscured even from the cast and crew making it; derived from Arthur Bentley’s concept of ‘symbiotaxiplasm,’ that miasma of experiences and sensations experienced by individuals that coalesce into the group experience of humanity, Greaves added ‘psycho’ to the thread to see how those complexities affected the psychology of human beings. The battlefield for this conceptual experiment becomes a guerrilla film crew in Central Park, film crews capturing an audition of a scene in which two actors hash out a lovers’ quarrel, as well as the actions of a quickly-mutinying crew and the passersby and vagrants who populate the park.

The results are fascinating, mercurial, and as invigorating as they are often hard to follow. But in so doing, Greaves manages to make one of the most fascinating movies about making movies of all time. Greaves, himself an actor with training at the Actor’s Studio, is himself a fascinatingly antic presence, exuding flustered confusion and calm confidence in equal measure. Split-screen sequences bifurcate (and sometimes even trifurcate) the chaotic action happening along three sets of cameras, highlighting the varying levels of artifice that go into moviemaking, and the constant cuts to beleaguered crew members questioning Greaves’ own competence are another creative cherry on top. The first film had trouble getting distribution, but finally saw release in 1991, where Steve Buscemi saw it and chose to help create a sequel, Take 2 1/2, which sees an older Greaves reuniting two of the actors from the first and reflecting on the first’s efficacy while filming this reunion, again in Central Park on the day of the New York Marathon.

A Blu-ray upgrade of an earlier release, Criterion’s newest master is a decent, if nearly deliberately messy, transfer to high definition. The washed-out 16mm graininess of Take One functions far better than the early digital-camera mugginess of Take 2 1/2, though it’s hard to fault either film for failing to achieve a standard of pristine-ness to which they don’t aspire. These were decidedly underground, cult films, and as such don’t maybe get the same care as a 2K or 4K remaster would warrant. The features, a single hour-long retrospective on Greaves’ career and an interview with Buscemi, aren’t much to write home about either. But the vibrancy of the films themselves, and the fact you get two of them for the price of one, is nothing to sneeze at.

David Cronenberg is maybe one of cinema’s most important chroniclers of the sexually-charged nature of violence and pain, and Crash (not to be confused with Paul Haggis’ shrug-worthy racial kumbaya) feels like one of the coldest, purest distillations of that sensibility. Based on the novel by J.G. Ballard, Crash sees Cronenberg transplanting the book’s English origins to America, where a spiritually-numb film producer (James Spader) with an equally-disaffected wife (a gloriously distant Deborah Kara Unger) finds new sexual and existential delights in the car crash that throws him into the orbit of an equally-unsettled doctor (Holly Hunter). Both injured but finding that hot as hell, the two are drawn into an entire subculture of people who risk death to feel horny and alive — including Elias Koteas‘ manic orchestrator of famous car crashes.

It’s a famously controversial film, from its run at the Cannes Film Festival where it was awarded a Special Jury Prize on account of Francis Ford Coppola being so disgusted with the film he couldn’t bring himself to award it Best Picture. And it’s no easy watch — its characters are dead in the eyes, barely audible when they do get to speak. Their sex is tangentially-erotic, devoid of feeling, two lumps of flesh going through the motions with little passion. And yet, that’s also the key to the film’s bizarre allure, late-stage capitalist America trying anything it can to feel something, anything, dependent on the metal machines its culture has wrapped itself around like a Chrysler to a tree. It’s all gears and leather and nihilistic dread, and if that’s your gear, baby, you’ll find plenty in Crash to pump your primer.

Fittingly, Criterion gives Crash a stunning 4K restoration that highlights all of the inky blacks and vacant stares of Peter Suschitzky’s cinematographer, and the 5.1 surround sound perfectly captures Howard Shore’s haunting, vacant score. There’s an insightful audio commentary from Cronenberg — a holdover from the 1997 laserdisc — and a couple of fascinating features from 1996’s Cannes press conference and a National Film Theatre Q&A. Jessica Kiang’s essay, printed on the back of a poster-sized version of the cover, is also a pulse-pounding read, as slickly evocative of Crash‘s sensuality as it is its despairing cultural context.

While we’re on the subject of Criterions centered around car crashes, it’s high time Best Picture Oscar-winning Alejandro Gonzalez Iñárritu entered the collection, and his 2000 debut Amores perros is probably the strongest case for his inclusion. His later works are technically impressive but reach increasingly shallow emotional ends (Birdman, The Revenant), but his winding, deeply-thematic style hits hardest in this triptych of stories vaguely intersecting around Mexico City, car crash, and the symbiotic and adversarial relationship between man and dog. First, there’s a dogfighter (Gael García Bernal) desperate to get out of his violent life and take his brother’s wife with him; then, a model (Goya Toledo) injured in the crash struggles with irrelevancy, a strained relationship with her boyfriend, and a dog lost in their floorboards. Finally, a professional assassin (Emilio Echevarria) turned vagrant tries to make good with his estranged daughter, his struggles with violence echoed in Bernal’s dogfighting dog whom he’s taken in.

What strikes you in the first few minutes of Amores perros, apart from Iñárritu’s taut direction and Rodrigo Prieto‘s pioneering oversaturated photography, is its deep fascination with the socioeconomic struggles of its setting. Bernal’s Octavio and Echevarria’s El Chivo are impoverished Mexicans living in squalor, either by choice or circumstance; both want to escape but are stymied by the forces that want to keep them poor. On the other side of the tracks, Toledo’s Valeria herself feels trapped by her largesse and fame, feeling it slip away as she languishes in her boyfriend’s otherwise-stately apartment. The dogs, meanwhile, serve as potent reflections for the humans around them: they can be saviors, martyrs, or killers in equal measure, depending on whose example they follow. It’s a morality play in the purest sense, one coated in blood and dirt and suffused with powerful performances. If you only know Iñárritu’s English-language works, you owe it to yourself to see the film that has built the career he now enjoys.

Luckily, Criterion gives the film the loving 4K restoration it deserves, preserving every bit of grain and Prieto’s handheld immediacy. The features ain’t too bad, either, like a neat conversation between Iñárritu and Cold War‘s Pawel Pawlikowski (I love when directors just get to congregate and share their love for each other’s art). A new doc on the making of Amores perros offers useful retrospective insight, as does rehearsal footage, deleted scenes, and an interview with composer Gustavo Santaolalla. The real cherry on top is Paul Julian Smith’s video essay on the film; I adore getting these kinds of scholarly appraisals of Criterion works, especially if we can’t get them in commentary form. 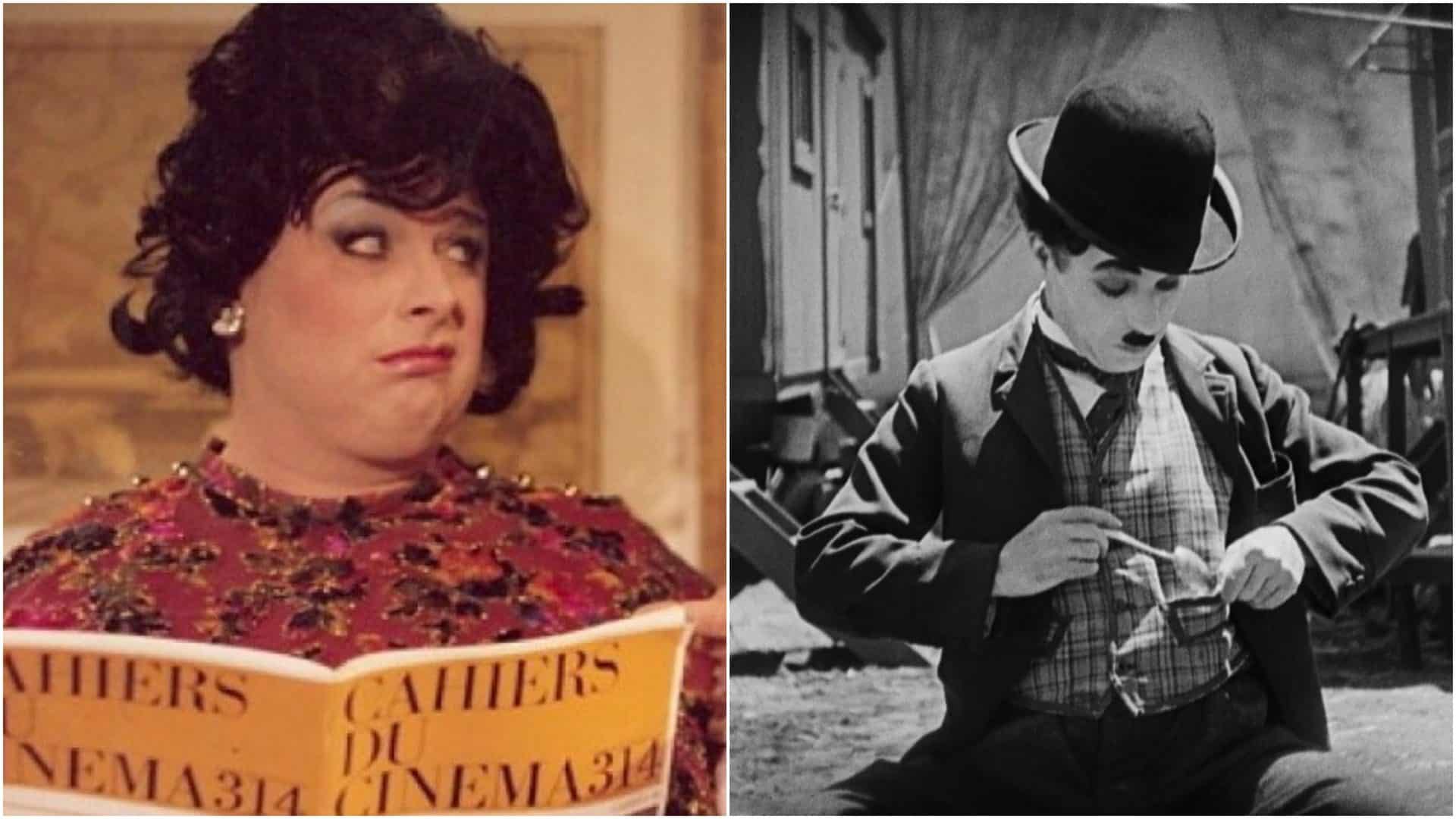 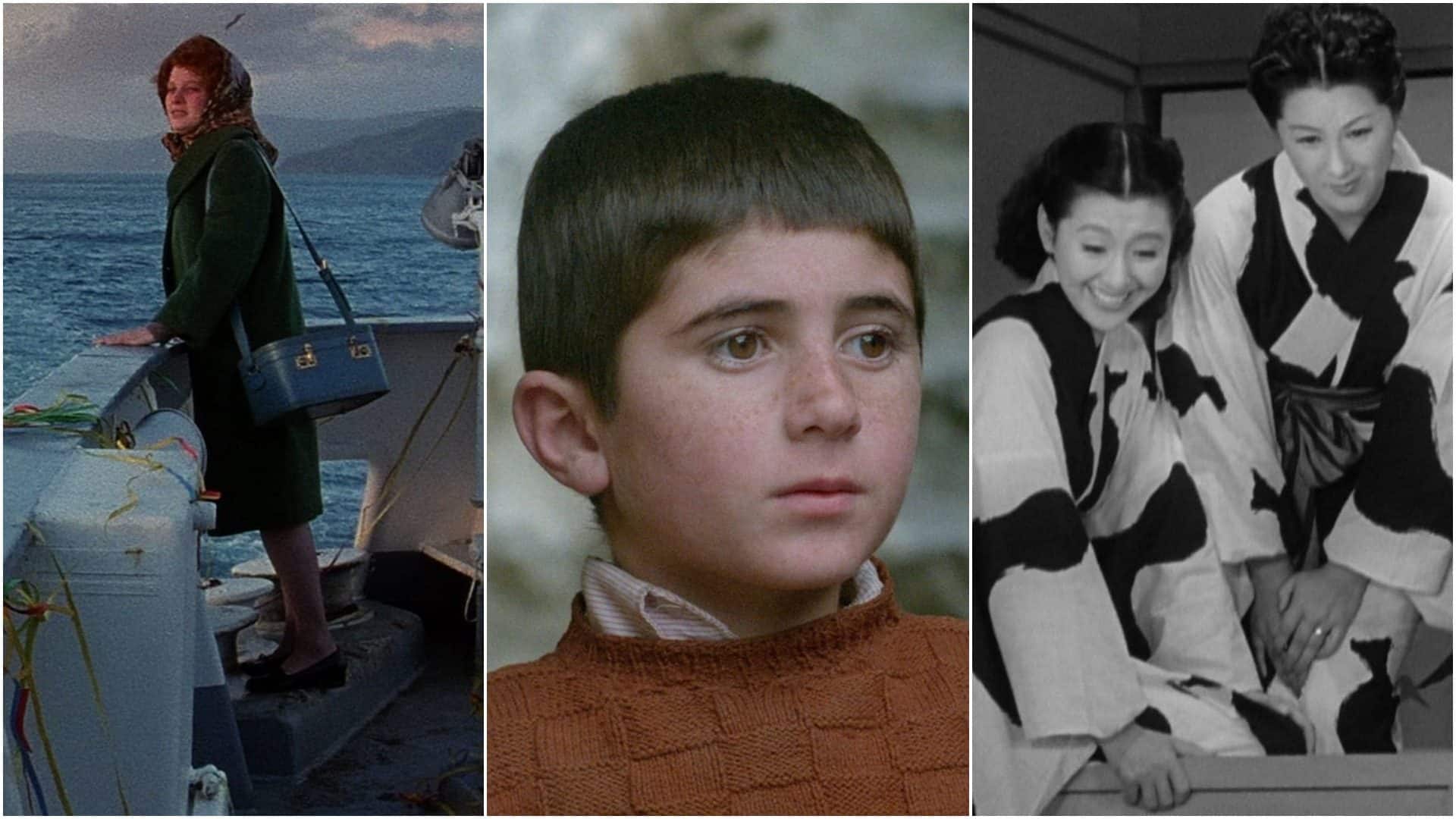 Criterion Corner: “An Angel At My Table,” “The Koker Trilogy,” ’50s Ozu 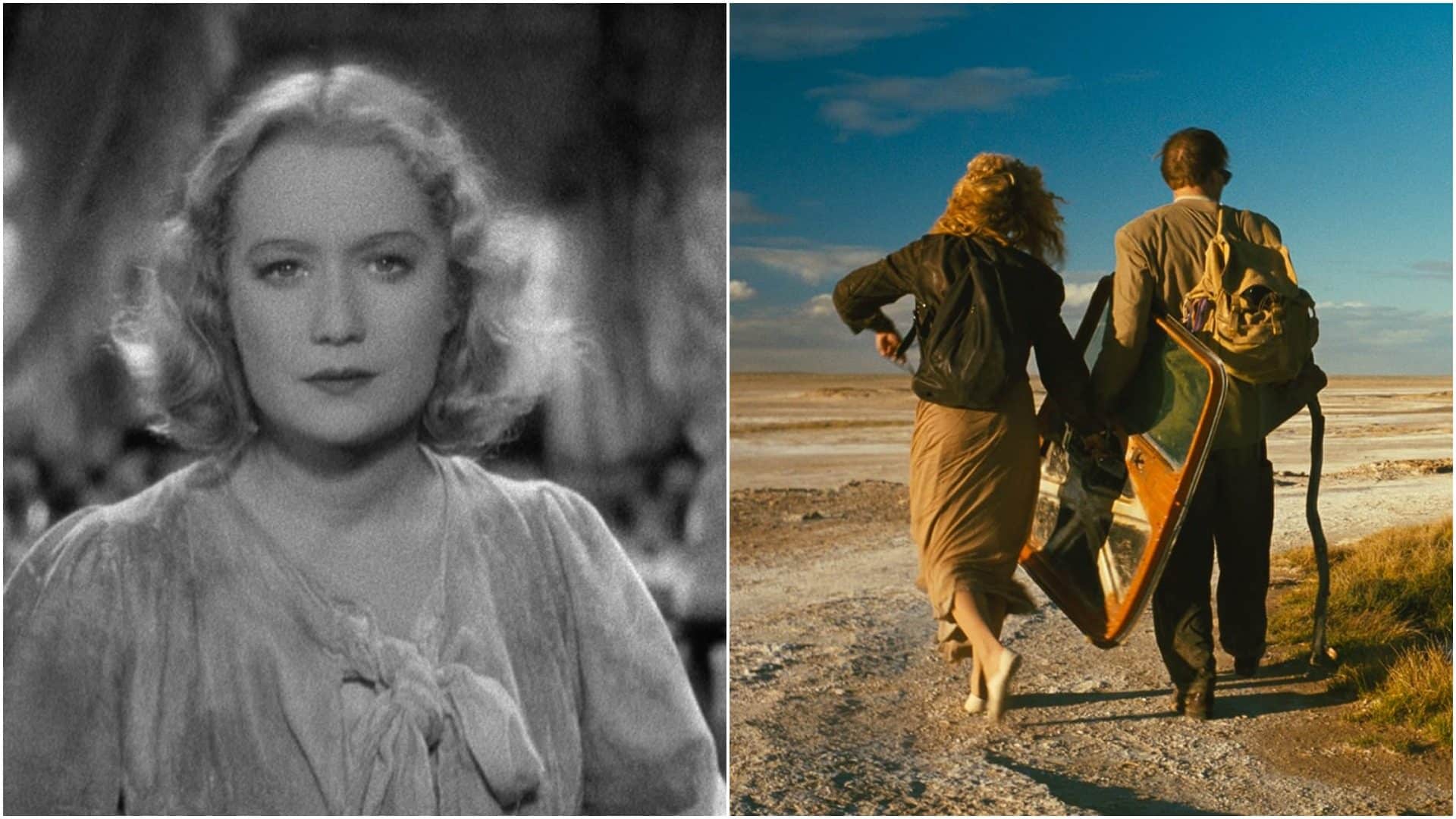 Criterion Corner: “The Story of Temple Drake”, “Until the End of the World”

The scandalous pre-Code melodrama The Story of Temple Drake and Wim Wenders' sci-fi road movie Until the End of the World get the Criterion treatment.