Naomi goes out of the frying pan and into the fire, as the occupants of Earth and the Rocinante face hard choices about how to strike back at Marco Inaros.

“Is this what the world’s going to be like now?” asks Clarissa Mao (Nadine Nicole) early in The Expanse season five’s eighth episode, “Hard Vacuum”. She and Amos (Wes Chatham), on their way back to Baltimore to get help from Amos’ former crew to survive the slowly-collapsing ecosystem of an asteroid-blasted Earth, have come across a pile of body bags filled with the residents of an old folks’ home. The presumption, of course, is that the staff of the home euthanized their elderly charges before leaving, dumping them outside before taking off for parts unknown, something Clarissa hopes is an “act of kindness.” It’s a mournful note to kick off the episode, one which matches the rest of the hour — all of our characters are in mourning, in one form or another, and looking for either survival, revenge, or a mixture of both. And while season 5 is winding up to its conclusion more slowly than maybe I’d like, that extra space gives us plenty of time to check in with our scattered cast of characters — especially Naomi, who’s put through the wringer in a host of different ways than she was last week.

Speaking of Naomi, the latter half of the season really feels like her show, as “Oyedeng” gave Dominique Tipper the chance to really flex her muscles with a soulful, pained performance during her emotional crucible on the Pella. When last we left her, she said goodbye to the last vestiges of hope that she could wrest her son Filip (Jasai Chase Owens) from the radical grip of his father Marco Inaros (Keon Alexander), making a dangerous EVA jump from the Pella to the abandoned Chetzemoka without a vac suit. Thanks to some careful breathing, quick thinking, and a vial of oxygenated blood, she survived the trip, though she’s much worse for wear. Bloodshot, swollen, suffering from the bends and a host of unspoken decompression effects, she shambles around the smashed, empty transport ship, which she discovers has been rigged with explosives and a falsified message from Naomi to lure the Rocinante in close, where they can blow both ships away. All she has to work with are her wits, a vac suit with no oxygen tanks, and access to a decompressed maintenance area of the ship.

Where “Oyedeng” gave us Naomi’s emotional journey, here she’s pure instinct and resourcefulness, the engineer shuffling wordlessly as she tries one thing after another, The Martian-style, to stop the false message from getting out. Writer Dan Nowak and director Marisol Adler give us only the barest nuggets of what we need to know through subtle camera framing, deliberate pacing, and Tipper’s physicality. You can feel her pain at every step, as she tries to get the smashed map table to work, then struggles to jerry-rig a helmet to work as a rudimentary comms. Even that simple task is like agony, struggling to get a tool from under a grate requires her to create a pulley system and use every ounce of strength her battered body has left to lift it enough to retrieve it.

Her ministrations eventually allow her to receive comms through the makeshift helmet speaker, but she can’t transmit a correction to Inaros’ faked distress call. But Naomi, ever-resourceful (especially when her new family’s lives are on the line), realizes what she has to do; she memorizes the message, straps on her vac suit, and heads into the airless section of the ship with just the oxygen she has in her suit. It’s a Herculean effort, Adler treating us to an agonizing montage of Naomi going in, tinkering with the comm systems, then rushing out to gasp for air, carving another notch in the doorway as she goes.

The Expanse has never been shy at showing us the dangers of space travel, but Naomi in particular has never felt more on the precipice than she is here. And yet, her determination to keep going feels like a culmination of her character arc throughout the season; she’s spent all her time trying to wrest her old family from the brink of violence, and now she gives absolutely everything of herself to keep her new family from suffering at their hands.

While Naomi’s efforts to survive are the episode’s most visceral, we do have other characters to check in on. Back on Earth, Amos and Clarissa make it to Baltimore, where his old crew is holed up in an apartment building, supplies stacked high in the stairwells to wait out the inevitable collapse of society. They meet Erich (Jacob Mundell) on the rooftop, who’s none too pleased to see them. Amos asks for his help to get off-planet, and suggests he do the same, but Erich’s unconvinced: “I’m not about to turn tail and run because some Belter fuckstick threw a couple of rocks.” But while he wants to stay in the Baltimore he grew up in, Amos helps him see that that Baltimore is dead and gone now — with the resource scarcity and civil collapse that’s slowly coming, it won’t be safe for any of them anymore.

Luckily, Clarissa has an option for them: there’s an island in Lake Winnipesaukee where the 1% have their vacation homes, all of which have suborbital shuttles that can get them to Luna (and presumably, where Amos can get more help from Avasarala). Being the daughter of Jules-Pierre Mao, she knows that area well, but as she relates through a story of a woman she met in prison, the person she used to be is dead; she’s a new woman now. “Starting over isn’t always bad,” she stresses to Erich. In the wake of Inaros’ unprecedented attacks on Earth, a lot of our characters will have to start over, and “Hard Vacuum” seems to be about starting that process.

In the wake of Inaros’ unprecedented attacks on Earth, a lot of our characters will have to start over, and “Hard Vacuum” seems to be about starting that process.

Unfortunately, there’s always a mourning process for what’s been lost before you can start over, and Drummer (Cara Gee) is deep in that mourning this episode. Her faction, now completely cowed to the Free Navy out of a sense of survival, is stuck scavenging the wrecks of Belter ships that didn’t toe the party line and defied the Inaros faction. The situation clearly has taken a toll on Drummer and her polycule of captains, especially as Inaros representative Karal (Oluniké Adeliyi) keeps a watchful eye on them for any disloyalty. “Marco kills those who defy him and we pick the bodies clean,” Drummer growls as she squirms under Inaros’ thumb.

Oksana (Sandrine Holt) is particularly worried about her, telling Drummer “We will get through this.” Drummer’s response? “I’m not sure I can.” It’s clear that this is more than just her subjugation to the Free Navy; methinks she misses Naomi a fair bit too, especially given their unspoken romantic chemistry between one another. But at least the crew gets a welcome moment of levity together when a fight is interrupted by some spilled water, which floats around in zero-G and leads them to playfully suck it up as it floats.

But of course, that joy is short-lived, as their ship picks up the faked distress call from the Chetzemoka signaling Naomi’s need for help. Karal, coldly, informs Drummer that the message is a sim and that Naomi took a long walk off a short airlock. Enraged, Drummer retreats to her room and screams her lungs out, taking a huge pull from the bottle of whiskey she had saved for Klaes Ashford before he was killed by Marco. It’s a moment of raw fury and anguish, a cry that feels bottled up from a season’s worth of slinking in the shadows and losing one loved one after another.

After that explosion, Drummer and Karal have a heart-to-heart; Karal explains that she, like Drummer, was close to Naomi once, when they both ran with Marco. But “Naomi stopped believing in what we were fighting for,” she says, leading her to resent Naomi for leaving when they needed her most. “She only truly cared about herself.” It feels like a moment of true mourning — that is, until they hear the automated distress call change, the call shorting out at vital moments to restructure the message. “This is Naomi Nagata…. tell James Holden that I am in… control.” Naomi’s alive, and now Drummer knows it.

Naomi’s survivalist one-woman show aside, “Hard Vacuum” is a slower hour for the season, in a season that’s peaked early with the attack and has seen the rest of the series chasing to catch up to that kind of stakes. One wonders how the last two episodes will fare as everyone gears up to make their moves: Amos and Peaches will make their break for the Moon, while everyone else converges on Inaros in a last-ditch attempt to save Naomi (or fall into Marco’s trap). Either way, one hopes the pace will pick up, even as the fifth season has justifiably relished its moments of pause to let us sit with the characters we’ve seen chase from one disaster to another for the entire series. 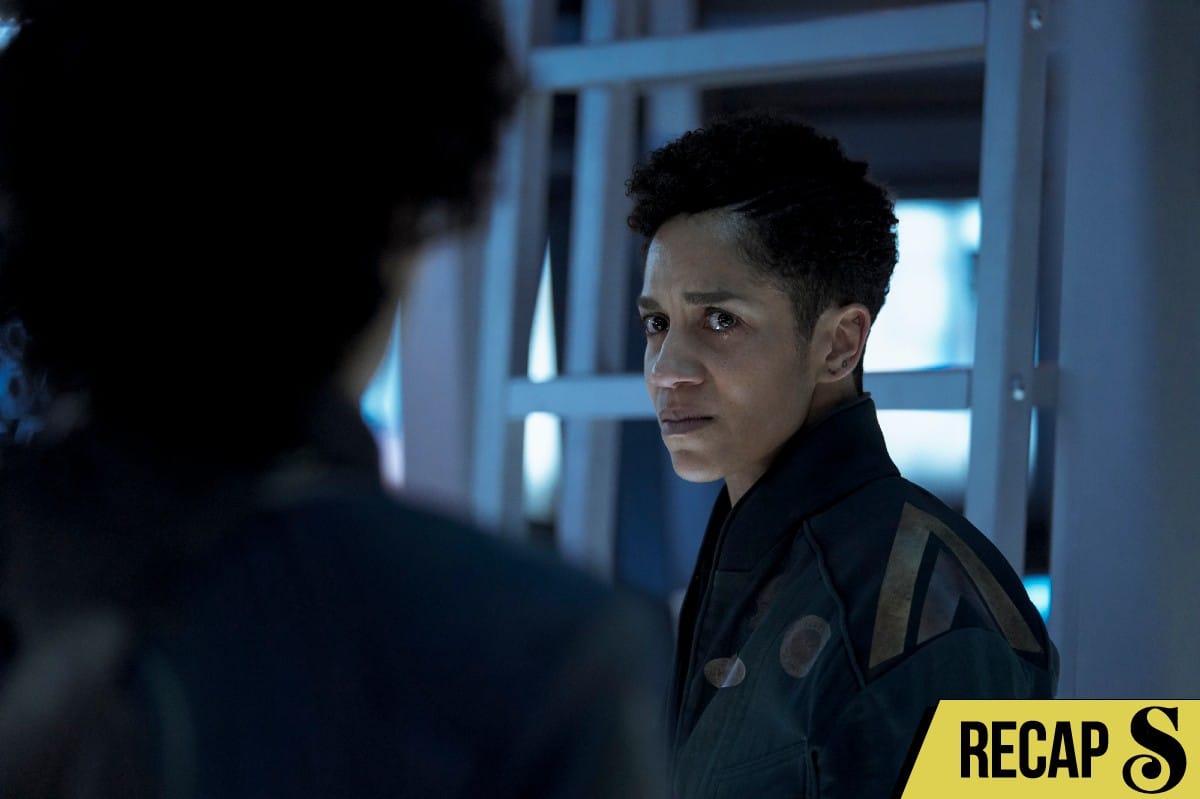 Naomi has a rude homecoming, as the show narrows its focus to a family fighting for its very soul.

The Expanse flies high in its final, uneven season

One of the current best sci-fi show comes to a powerful, exciting end. 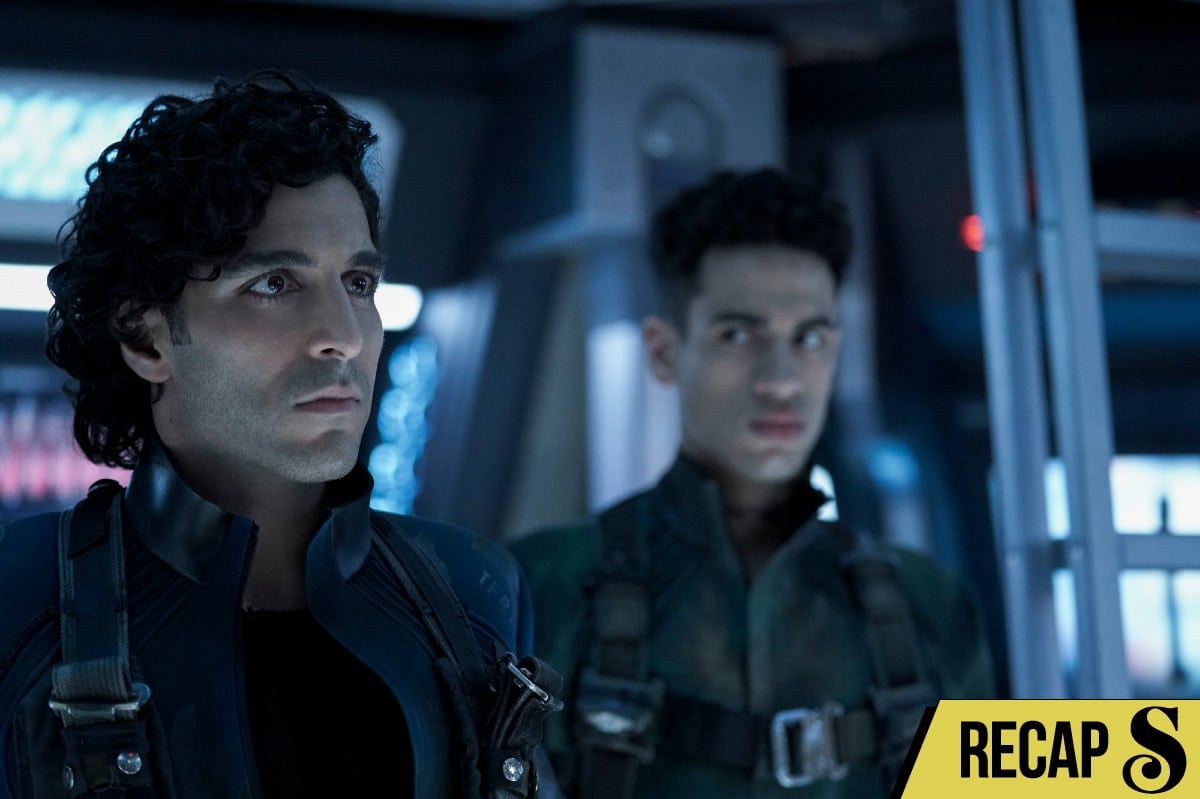 Marco consolidates his power, as the rest of our characters recalibrate their sense of purpose and fight to survive in the wake of the Free Navy's attacks on Earth.