I love Ted Lasso. I have made mention of this several times on this very site. My passion burns so brightly, it seems, the good people behind the foremost pop culture website on the planet, (this one natch), offered me a chance to do recaps of this season’s episodes as they air. As you’re reading this, I am sure you can conclude that I leapt at the opportunity. So let’s hit the pitch.

(I plan to limit my football puns. I am not optimistic about my ability to realize this plan.)

Opening on a close-up of Nathan (Nick Mohammed), the play-by-play tells us that Dani Rojas (Cristo Fernández) will be taking a penalty kick to possibly win the game. In quick order, we learn AFC Richmond is on the edge of eight tied games in a row if Dani doesn’t convert. This, Arlo White explains, will “tie the record which is currently a tie between Southampton and Swansea.” There’s a lot of ties, you see.

While White is having difficulty imagining such a thing his partner Chris Powell isn’t struggling at all as he’s a “right-brain dominant with a knack for make-believe.”

It’s…the kind of thing a lesser show would bobble quite badly.

On the field, Nathan proposes a prayer, an idea Ted (Jason Sudeikis) has no problem with, “but to which God and in what language?” Nathan and Coach Beard (hey, he wrote this episode!) settle on crossing their fingers and making a wish. If you grew up with the “crossing your fingers cancels out what you are saying” thing like I did, you may find yourself questioning the metaphysical effectiveness of this decision.

Unfortunately, Earl (hey, like the name of the episode), the club’s greyhound mascot, has other plans. He breaks his leash and takes off after a pigeon. For an old dog, Earl still has wheels and hops. Alas, that means he ends up right in the path of Dani’s kick. Richmond has another tie, Earl has a ticket to eternal rest, and Dani has a bit of accidental caninocide on his conscience.

Ted takes the event head-on during the post-game, sharing the story of his neighbor’s dog Hank beginning with Hank’s attack of a 3-year-old Ted and ending a decade later with Ted being the dog’s keeper and having to put him to sleep.

It’s pure heart-tugging delivered almost entirely directly to camera except a few insert shots. It’s also the kind of thing a lesser show would bobble quite badly, either going too saccharine or inserting ill-timed jokes to break up the moment. It doesn’t actually seem to answer the question asked, but it’s easy to see why the reporters might have gotten a bit distracted given how good Sudeikis is delivering the monologue.

One person who the story doesn’t seem to help, though, is Dani. He’s too busy standing in the team shower, fully dressed, muttering prayers and crossing himself over and over. At a loss, Ted suggests they just give him space and the players shower at home. When Sam (Toheeb Jimoh) points out that some of the players prefer long baths, Ted signs off on that too.

Everybody seems to have jokes about ties including Ted’s son who sends him a picture wearing multiple men’s ties and another team sending Richmond a bunch of Thai food. The other team I get, but, Henry (Gus Turner), why you gotta hit your dad when he’s down?

Rebecca (Hannah Waddingham), Higgins (Jeremy Swift), and Keeley (Temple Juno) try to buck Ted up before Higgins leaves to figure out how to explain the Luke and Leia kiss after his sons watch The Empire Strikes Back for the first time. Then Keeley and Rebecca shift their focus to Rebecca’s phone and we learn that Rebecca has started dating for the first time since her divorce. It seems the time has come for him to meet some of her friends so she and Keeley make a plan for a double date.

Meanwhile, the fourth member of that double date, Roy Kent (Brett Goldstein) is looking a little scruffier around the edges. He’s coaching his niece Phoebe’s (Elodie Blomfield) football team, hanging out with his yoga mom friends once a week, and avoiding the free tickets Ted Lasso keeps leaving him at will-call under the names of women country singers like Shania Twain and Dolly Parton.

Keeley is hoping he’ll get out and do more soon, including a football “pundit” gig with Sky Television. Roy seems less enthusiastic about the idea, unspooling a profane rant that raises his swear tab with his niece to 1,236 pounds (about $1,700 American). He also makes note of his retirement press conference, which he says was humiliating while Keeley seems quite fond of.

Dani’s struggles continue as he has a nightmare about murdering a cartoon dog goaltender and wakes up screaming “FOOTBALL IS DEATH.” On the field, he can’t score on an empty net and ends up kicking a ball into Ted during a drill. Diagnosed with the yips (but don’t say it!), Higgins convinces Ted, Coach Beard, and Nathan to bring in a psychologist despite Lasso’s “general apprehension and a moderate Midwest skepticism” about therapy.

The double date goes fine and, as Roy later explains, that’s a problem. Rebecca’s new paramour John Wingsknight (Patrick Baladi)—“wings’ night, like at a sports bar?” wonders our very American Ted—turns out to be a bit of blowhard. He’s fond of stories about near-fights he gets in at Broadway shows and likes whatever Manchester football is winning at any given time. He also brings up Roy’s retirement presser again.

[Juno] Temple gets to do a Ted impression…and her interpretation has him sounding like a grumbly muppet.

After the dinner, Keeley tries to keep it positive calling him “not shy” and “appropriate” multiple times. Roy, as is his wont, proves blunter, pointing out Rebecca deserves better.

Over dinner Ted explains his feelings about counseling to Coach Beard, recalling how couples therapy made him feel like he was being set up. He’ll still go through with it for the team’s sake, but he can’t help but link all therapists to that one couples’ thereapist.

Doctor Sharon Fieldstone (Sarah Niles) ends up being both very good and confirming Ted’s feelings. She has no use for the cutesy song and dance intro, speaks several languages, won’t stand for the nickname “Doc,” and seemingly gets Dani back to himself in one session. Worse, she doesn’t wave back when Ted waves to her and the rest of the team enthusiastically starts making appointments with her after Dani’s return.

Rebecca breaks up with John at a coffee date later during a philosophical monologue about vulnerability. In another example of how decent the universe of Lasso is, John takes it like a champ in a way that makes him way more likable than his tale of a fight in the line for Stomp! back when tickets were still hard to get.

The episode closes with a glimpse at the only major character from season 1 we haven’t seen yet, Jamie Tartt (Phil Dunster). He’s starring on Lust Conquers All, the reality program that Roy and his yoga moms enjoy over glasses of rosé. We close on Roy gamely holding his tongue as the mom coos over the shirtless preening Tartt. 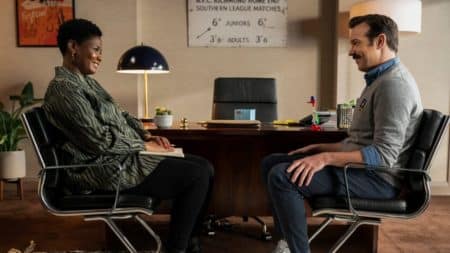 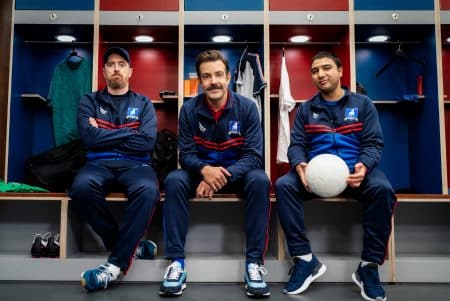 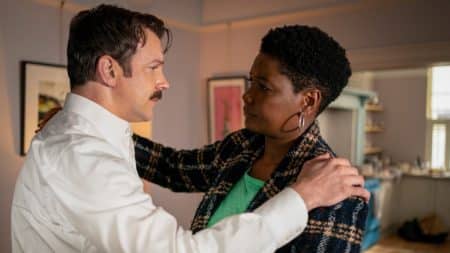