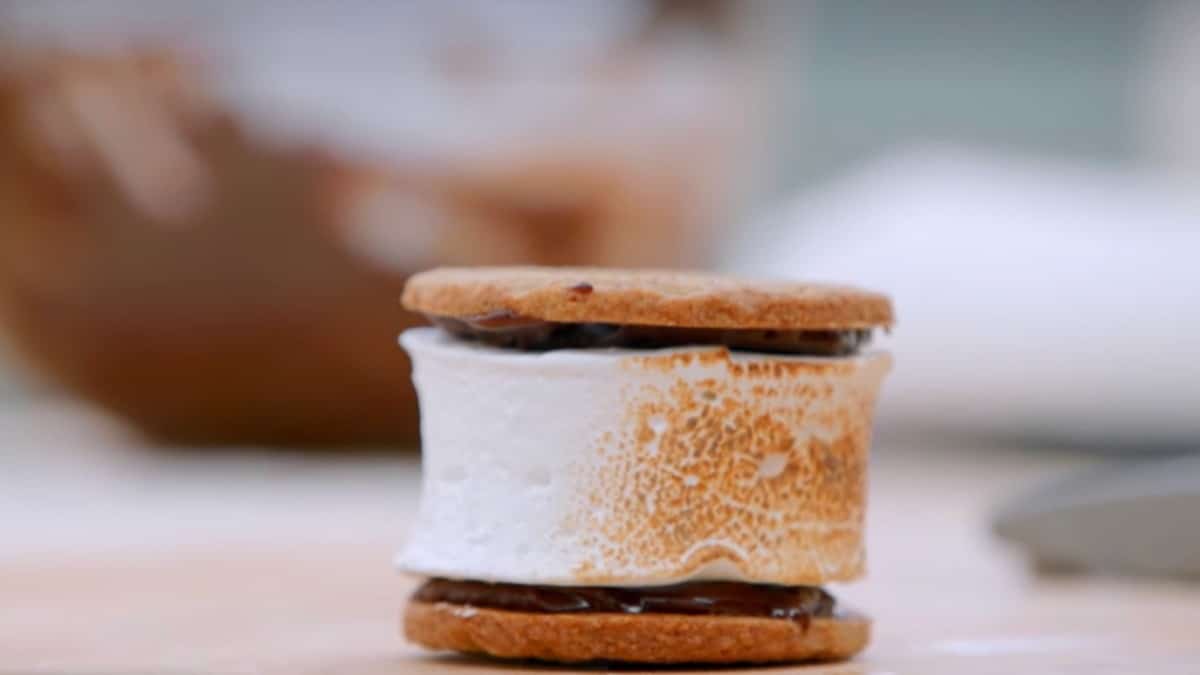 Welcome to the first-ever Halloween Week of GBBO! In the cold open we’re treated to a joke about Noel’s monstrous appearances (I wasn’t too far off with my cold open prediction in last week’s recap). As it’s a week all themed around the spooky, scary treats of Halloween, some bakers might be haunted by their failures, while others rise from the baking dead to stage a comeback! Will this week be scarier than Mexican Week? Read below to find out!

The first challenge the bakers face in Halloween Week is an apple cake signature. They can bake any type of sponge, but their cakes must feature fresh apples (i.e. none of that essence or artificial flavoring). Paul’s also a stickler: he doesn’t want to see any apple puddings or apple trifles – he wants an apple cake, and he wants it in 2 hours!

The bakers that seem to have the most issues with their apple signatures are Kevin and Dawn. Kevin has to play catch up, as he’s going for a layered streusel cake (as in layering two streusel cakes, which seems like a bit much) that ends up too hot when he tries to decorate with icing. Dawn’s Ukrainian Sharlotka ends up with a dipped top, as noticed by Paul. Maxy and Syabira seem the strongest of the signatures, each earning Hollywood Handshakes for their bakes!

Onto the technical, and it’s set by Paul Hollywood. He’s tasked the bakers with creating 8 identical s’mores in two hours. They’ve got to make the marshmallows and digestives (i.e. cookies), then blast them with a blowtorch to achieve that roasted gooey center. How clever of those Brits to use digestives for s’mores! We must tell them about graham crackers ASAP! I almost wondered if Paul was also going to require the bakers to build a campfire (remember the pita challenge in 2019?), but alas the bakers just get a mini-blowtorch to roast their s’mores.

This week’s technical feels like it’s catering to the US viewers, even if the s’mores aren’t exactly a close copy to what we eat over here stateside. And those poor bakers, most of them haven’t even had a s’more before this challenge?! This is an open invitation to any GBBO baker – if you ever find yourself in the NYC area, hit me up and I’ll show you the way of the American S’More.

The rankings in the technical are as followed: Abdul (7), Maxy (6), Dawn (5), Sandro (4), Kevin (3), Janusz (2), and Syabira (1). Poor Abdul’s marshmallows were obliterated when he torched them, turning his platter of s’mores into nearly s’mores soup. But I also call out the judges for using spoons to taste test?! Paul and Prue, how can you call yourself true s’mores judges if you do not eat them with your hands?!

Going into the showstopper, Syabira is riding high, as her flavors have returned, and she’s earned a high spot in the technical. She seems well within the lead for Star Baker. Even though fellow handshake recipient Maxy had a strong signature, she came in 6th in the technical (her marshmallow was deemed “too soft”), so she’s going to need one heck of a showstopper to steal the Star Baker from Syabira. And poor Dawn and Kevin both seem stuck at the bottom of the bakers – they know they’re going to have to pull out all the stops in the showstopper challenge if they want to remain in the tent.

It’s showstopper time, and the bakers are tasked with creating a hanging lantern treat. Inside the lantern, the bakers must place sweet treats inside. The lanterns can be baked from any treat they like – most bakers opt for forms of cookies, like ginger and sugar cookies. Paul and Prue are looking for lanterns that are robust enough to hang, yet fragile enough that they can smash apart, revealing the treats inside. This challenge feels a bit like a piñata challenge that was repurposed from Mexican Week. Or perhaps Paul and Prue have some anger management issues and they just want to bash things apart? Regardless of the why, the bakers have 4 hours to create their spectacular and spooky hanging bakes.

The bakers that have the most issues getting their lanterns to hang are Dawn and Maxy. Poor Dawn, her black cat lantern cracks and appears too fragile to hang. And Maxy has a moment where the top of her lantern breaks, and is comforted by Noel. It was an oddly comforting moment between them – perhaps Mel or Sue snuck into the tent and was wearing a Noel Fielding costume? Matt also had some connecting moments, especially when asking Janusz about costumes to pick up men in at clubs (Janusz said “pregnant nun” helps in that regard). Love it when the hosts and bakers connect in the tent!

The showstopper judging commences, and it seems again Syabira has struck Star Baker gold with her hanging spider lantern. Her lantern featured unbelievable dark chocolate and ginger biscuits, and a rather not-so-great orange truffle biscuit. The judges also seemed to enjoy Janusz’s incorporation of ground-up crickets – that’s right, real crickets! – into the lantern. Perhaps all that stands in the way of Syabira’s Star Baker title is dead, ground-up bugs in a biscuit. Paul seemed a bigger fan of the crickets than the nuts in Kevin’s showstopper. It seems either Dawn or Kevin will be packing their bags.

At the end of the episode, it is of very little surprise that Syabira is crowned Star Baker. She really had high praise in all of the challenges, and it appears the judges will forgive her mistake of mixing orange and truffle flavors. Sadly, the baker to depart this week is Dawn. She wasn’t surprised it was her turn to depart the tent, and she leaves the tent proud that she make it so far on The Great British Baking Show during her stay. 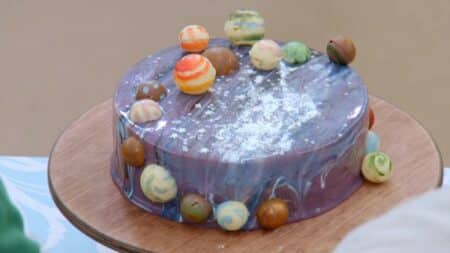 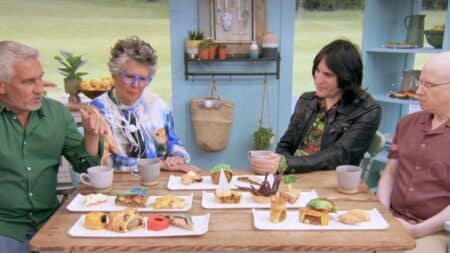 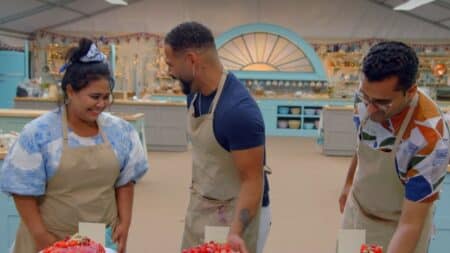