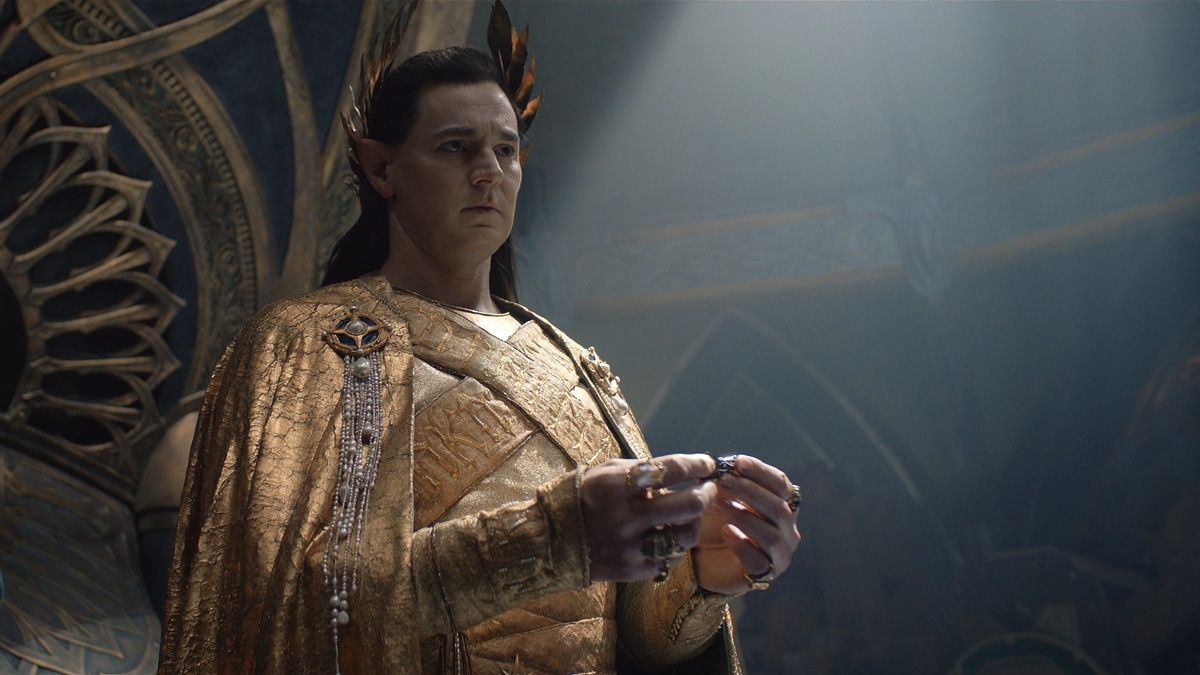 The series, like the characters, mix dark and light to finish the season on a high note.

After seven episodes of edging its viewers, The Rings of Power finally pays off with some questions answered. Not all, though. Others are left open for another day, like what’s happening with Prince Durin over in Khazad-Dum, or what kind of welcome Queen (no longer Regent) Miriel can expect arriving back in Numenor. Unfortunately, those are plots we’ll have to wait till next season to uncover. Still, this week’s finale, “Alloys,” gives us a lot of answers to chew on after a whole lot of Macguffins.

Halbrand is outed as Sauron, an inevitability given the bonfire chemistry between Charlie Vickers and Morfydd Clark’s Galadriel. It had to be Halbrand because that’s the one that would hurt the most. The Stranger (Daniel Weyman), who we now know (with 99% certainty) is Gandalf, was too easy, too plausible to be Sauron. He even had The Three and himself convinced. So much so they were ready to cart him off to the Eastlands of Rhûn to begin Dark Lord training. Thank goodness, then, for those intrepid Harfoots saving the day. Celebrimbor’s (Charles Edwards) ego and ambition also put him in the running. In the end, though, a few well-timed words and a passion for metallurgy were enough to make Galadriel suspicious of her sexy southlander. A scroll from the archives confirms what she feared. She girlbossed too close to the sun and got gaslit for her efforts.

Of course, that’s now how Halbrand/Sauron sees it. He views the pair as…well, alloys, him and Galadriel. Dark and Light, their strengths reinforce the other’s weaknesses. Two sides of the same coin. That clicking noise you hear is the sound of one thousand new fics going up on AO3. You see, Gaddy’s goodness makes him want to heal Middle Earth of its still-tender scars from the War of Wrath. “Heal, or rule?” Galadriel asks. To Sauron, there’s little difference. As devastating as this reveal is to Galadriel, it’s hard to say what kind of destruction and mischief Sauron could have caused had he been found by The Three first. Sure, he wouldn’t be strolling back into Mordor with the secret of smithing a ring of power, but he might have at least delayed a bit.

As it is, The Dweller (Birdie Sisson), The Nomad (Edith Poor), and The Ascetic (Kali Kopae) believe that The Stranger is the Dark Lord. They plan to take him to Rhûn to restore his memories. He seems ready to go until Nori (Markella Kavenagh) and her merry band of Harfoots tries to rescue him. The Three put a knife in Sadoc Burrows (Lenny Henry) and are about to incinerate the rest when The Stranger remembers what might be the most important thing about him: He is good.

He turns The Three into moths in a fairly stunning/horrifying scene. Strangedalf then saves Nori, Marigold (Sara Zwangobani), Poppy (Megan Richards), and Malva (Thusitha Jayasundera), but sadly isn’t quick enough to save Sadoc, who dies with the sunrise. The Harfoots do as Harfoots do. They move on but remember those left behind. Without Sadoc, Malva steps up as leader, with Poppy taking over as trail finder. Nori, however, will be accompanying Strangedalf to the Eastlands, where he hopes to find more answers. “You belong out there with him,” Marigold tearfully tells her daughter. And it does seem they’re incomplete without each other, Alloys of a different sort.

After seven episodes of edging its viewers, The Rings of Power finally pays off with some questions answered.

These two plot lines take up most of the finale. Still, we have a few brief glances into Númenor, the first being Pharazôn (Trystan Gravelle) bringing in the builder apprentices to begin sketching the likeness of the King to begin work on his memorial. Among those apprentices is Eärien (Ema Horvath), Elendil’s (Lloyd Owen) daughter. Each apprentice gets one hour alone with the King to sketch him. When it’s Eärien’s turn, the King wakes, thinking she’s Miriel (Cynthia Addai-Robinson) and warns her that “if the old ways are not restored, Númenor will fall.” He begs her to climb the tower and see for herself but warns her not to look too long, “as I did.”

Eärien, cursed with the same lethal curiosity as her brother, does as the King bids, finding his palantír at the top. What will she see when she looks? And who will she tell?

Elendil and Miriel arrive back in Númenor (after a rather tender moment below decks) to find the harbor filled with black flags. The King died before being reunited with his daughter, but we’ll have to wait for season two to know the fate of Elendil’s daughter.

And while things look grim for some of our wanderers, it’s not all (mount) doom. Galadriel, now knowing the face of her enemy, tells Celebrimbor that he must use the mithrail to form three rings. It’s the only way to bring balance and heal their people. Celebrimbor can do it, thanks to Halbrand’s idea of creating an alloy to bring out the strongest aspects of the mithrail’s power. But the only metals that will work are the purest gold and purest silver from Valinor.

Galadriel gives up her most treasured possession—Finrod’s dagger—to complete the rings. She’s always been ready to sacrifice for her people. If Celebrimbor told her he needed eight pints of Elf Queen blood, she’d open the vein herself. Just as the rings are finished and set, we get one final glimpse of Halbrand/Sauron coming home to Mordor with a glint in his eye and a smile on his face. If I were Adar (Joseph Mawle), I would start running now. 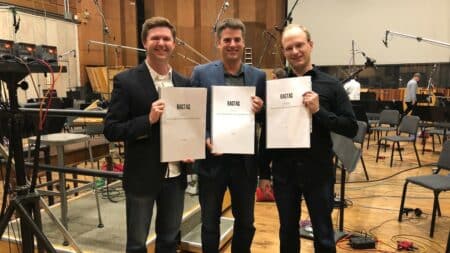 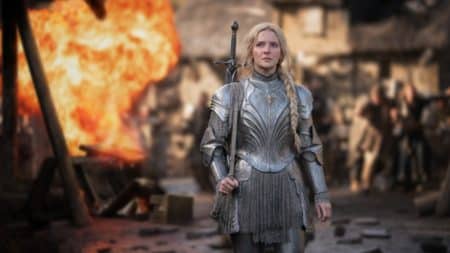