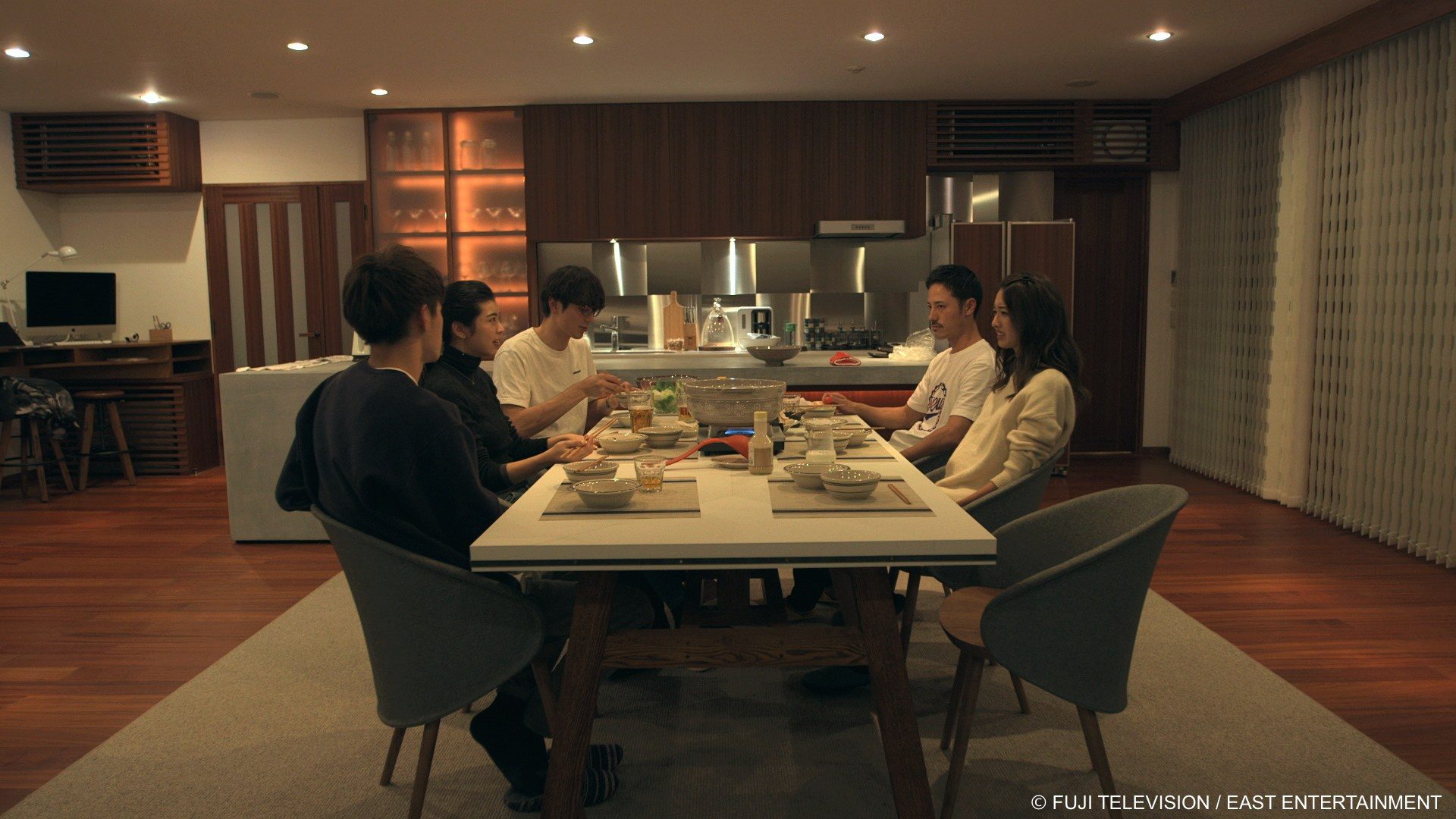 When I was a kid, my family’s most common bonding experience was sitting in the living room together to follow the current season of American Idol or Survivor. But I was never into the Big Brothers and Jersey Shores of the . Wherever we are ostensibly watching people “live their lives,” we are expected to root for the mishaps and the upsets. The producers of Keeping Up with the Kardashians are always looking for the next over-the-top drama or display of excess. But for people like me, there is little appeal in watching people get drunk and fight each other.

Luckily for people like me, we now have Terrace House.

If you haven’t been paying attention to the thumbnails on Netflix, Terrace House is a Japanese reality show that’s been running in one form or another since 2012, with the premiere of Terrace House: Boys and Girls Next Door on Fuji Television. After that season was a hit in Japan, the series was purchased by Netflix and three more iterations were made: Boys and Girls in the City, Aloha State, and most recently Opening New Doors, the final nine episodes of which will hit international Netflix sometime in February.

The premise of Terrace House is simple and fairly comparable to The Real World: six people, three boys and three girls (all usually in their 20s), live as roommates in a house together. They are free to come and go as they please, and usually keep their regular jobs when they move in. There are no set rules, no stated objectives, and people only leave the house when they decide they’ve gotten what they wanted out of the experience. And, as co-host You notes in the beginning of every episode, “there is no script at all.”

Terrace House doesn’t operate like any reality show produced in the United States. It’s a show where, more often than not, disputes are calmly talked out around the dining room table, and housemates are seen supporting each other rather than tearing each other down. As it steadily grows in popularity here in the States, it’s time to examine what makes it so appealingly different from the shows most of us grew up with. Here are five things Terrace House: Opening New Doors is teaching audiences about the reality of reality television (spoiler warning, obviously):

You can actually root for its subjects

Whenever I’m pitching Terrace House to friends, I tell them that there are two unwritten goals: fall in love and chase your dreams. The culture of the show is such that we almost always want housemates to succeed in both of these things. No one in Opening New Doors exemplifies this better than Tsubasa.

Tsubasa is the captain of the local ice hockey team, the Karuizawa Fairies, and her dream is to eventually make it onto Japan’s national team. Tsubasa’s journey through the national championships, and its bearing on whether she stays with her beloved Fairies or joins a better team, becomes a focus of her time on the show. But the real draw in this storyline is the way the other housemates rally around her. The scenes showing the entire Terrace House cast rooting Tsubasa on at her matches are some of the sweetest displays of camaraderie I’ve seen on a reality show. For most of those house members, there’s no personal stake in whether Tsubasa wins or loses. But because she’s their friend and because this is her dream, they will always be there to cheer for her.

Whereas other reality shows pit cast members against each other, Terrace House proves that you can build an audience around positivity. Even when Tsubasa loses a match, her love for her team is undeniable, as are her housemates’ love for her. Her storyline is a lesson in celebration and loyalty, and it’s made her one of this season’s most beloved cast members.

The escapism of the mundane

What constitutes “drama” on Terrace House is pretty different from American reality shows. The show’s plotlines are usually relaxed and slow, but that also means we are hypersensitive to the little things. To illustrate this, allow me to introduce the trainwreck that is Yuudai.

Yuudai is an 18-year-old “aspiring” “chef,” and his on-screen personality is pretty much the definition of a facepalm. There are two important things to know about this kid: one, he wants to fall in love with a girl who will take care of him like she’s his mother (a real thing that he said with his real human mouth); and two, that he doesn’t actually practice cooking because…well, the reason why kind of depends on the day. Yuudai’s cringe factor rises exponentially throughout his time on the show as every single other person in the house tries and fails to talk some sense into this literal child. It’s a series of unfortunate events that’s impossible to ignore and breathtaking in its storytelling.

While the saga of Yuudai left me open-mouthed at some points, it was also a very normal thing to happen. We’ve all met Yuudais: entitled young men who won’t listen to criticism and decide to quit right when things start to get hard. The trick that Terrace House pulls off beautifully is in framing everyday frustrations and misunderstandings in ways that give them satisfying dramatic arcs.

The most satisfying twists come naturally

Because so much of what happens on this show is self-directed, Terrace House’s twists arrive from a much more character-motivated place than if, say, all the queens suddenly returned for a meaningless lip-sync elimination bracket. One of those twists was the brief but memorable tenure of Shunsuke, an aspiring makeup artist who is openly figuring out whether or not he is bisexual.

As the first openly queer character on Terrace House, Shunsuke’s arrival was an obvious attempt on the producers’ part to shake up the house’s social dynamics. But after only a few episodes, Shunsuke managed to take control of his own narrative and shake things up again.

As I mentioned above, cast members are free to leave Terrace House anytime they wish, opening up a spot for someone new to join the cast. The announcement to leave often comes suddenly, but Shunsuke’s choice to leave the house after only about six weeks was more sudden than most. After going on one date with another male house member, Shunsuke explained to the rest of the cast that yes, he is bisexual. Having done the thing he came here to do, he didn’t see any reason to stay in a house full of straight people.

It’s easy to interpret Shunsuke’s short tenure as the inevitable plight of a queer cast member on a straight dating show. But Shunsuke’s sudden departure also exemplifies the idea that reality TV’s best plot developments are driven by cast members who know what they need to do and set out to do it – sometimes in unexpected ways.

The audience is truly a fly on the wall

We learn about the cast members by watching their interactions with each other, and by hearing other people talk about them. Furthermore, the filming style is distinctly different from most other observational reality shows in that 99% of camera setups are static wide shots and close-ups. There is almost no handheld (except when physical activity demands it). It’s actually pretty easy to forget that the cast members know they’re being filmed at all.

All of this is to say that Terrace House doesn’t feel like it’s been produced. There’s usually great fun for me in watching reality TV just to pick apart the storylines that were obviously manufactured to make a more exciting plot.

And obviously all of that is still happening – just look at Yui, who comes across as a stern and uncompromising mom-type but whom all the cast members apparently love to be around. But it’s so difficult to tell what’s been coached and what hasn’t that this show feels more like reality than any other reality show. Like You says in the show’s intro sequence, all the show does is “observe how [the cast members] interact.”

Unlike other shows, which use jerky handheld or carefully-cut backstage interviews to interpret events for us, Terrace House’s subtle style makes us believe in the stories it’s telling without any filter between actions and audiences.

is better enjoyed with friends

If the actual house part of Terrace House is subtle, it’s more than offset by the panel of commentators. I was first introduced to Terrace House through Griffin and Rachel McElroy’s now-defunct podcast Rose Buddies. While discussing Boys and Girls in the City, Griffin notes that he has taken to calling the panel of commentators “our friends.” Folks, I can’t think of a better way to describe these six lovable assholes.

Our Friends are Japanese actors, comedians, and hosts, and they love Terrace House just as much as we do. Every episode, Our Friends watch Terrace House along with the audience, occasionally stopping the show to offer commentary on what’s just happened. Our Friends speculate about what housemates might be feeling, how they might react to a certain situation, and who might fall in love with who.

More importantly, Our Friends give viewers a way to join in a communal viewing experience. Just like the shows I watched with my family as a kid, Terrace House’s built-in panel of commentators provides viewers with the feeling of being connected to a larger community of fans. They also conveniently fill the role of without actually interfering with the lives of the cast members, which only furthers the show’s hands-off filming style.

For non-Japanese audiences, Our Friends also provide much-needed cultural interpretation. As someone who doesn’t speak Japanese and didn’t grow up in Japanese culture, it can sometimes be difficult to decipher a cast member’s exact tone when I’m just reading subtitles, or to know when a gesture or conversation is polite versus passive-aggressive. In such moments, Our Friends come to the rescue, giving over-the-top reactions and reiterations of recent scenes. Our Friends, ultimately, are on the viewer’s side – not pushing any one version of the story, but giving viewers more context in which to pick apart the story on our own.

Of course, no show is perfect, and Terrace House has its share of questionable or outright dangerous moments. And there is the matter of the soundtracks thrown onto its international release, which are…bad. But the show is a worthwhile study of the real motivations of reality shows, and how those motivations manifest themselves in the finished product.

Thinkpieces like this often note that nothing happens on Terrace House. But I disagree: a lot happens on this show, but it all happens on a wildly different standard of scale and pacing. In real life, people aren’t getting drunk and fighting each other on a nightly basis. Terrace House is the closest thing to real life we have in a reality show, and that is a fascinating thing to watch.