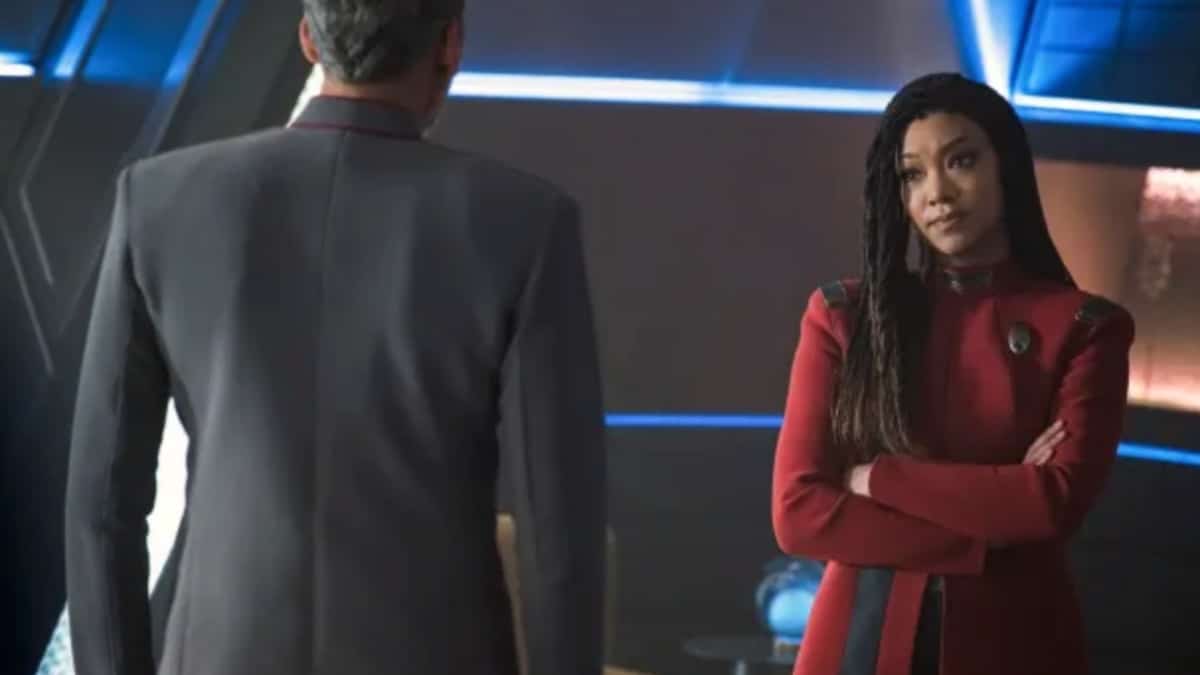 Star Trek can and should be fun. Take “A Piece of the Action,” one of the original series’ finest hours, which also happens to be a goofy episode about aliens imitating 1920s gangsters. Hell, one of Discovery’s own high water marks came in season 1’s “Magic to Make the Sanest Man Go Mad,” a madcap Harry Mudd outing that’s not light on laughs. There’s no reason Discovery, or any other Trek series, can’t keep things loose and lively now and then.

The catch comes when that approach runs aground on this season’s universal stakes and ongoing personal traumas. On the one hand, “All In” wants you to tremble at the risk of angering the uber-powerful species behind the DMA. It wants you to consider the moral implications of Cleveland Booker (David Ajala) and Ruon Tarka (Shawn Doyle) harnessing the black market to barter for an illegal weapon. It wants you to lament the strain on the relationship between Book and Michael Burnham (Sonequa Martin-Green), born of intersecting traumas and conflicting personal duties.

Yet, on the other, it wants you to chuckle as the couple cheekily colludes in a zany game of poker. It wants you to smile while Burnham plays carnival barker for the first pro wrestling match in Star Trek since Seven of Nine faced The Rock. It wants you to chortle at the antics of Hoz (Daniel Kash), the Jay Leno-esque alien who runs the joint and spits out a never-ending stream of corny, incomprehensible truisms.

Therein lies the rub. The mesh of tones just doesn’t work. You can’t have Tarka giving a pained monologue about loss in one minute while Burnham does silly tells at the poker table in the next. Tonal whiplash abounds here, which undercuts the drama and does the comedy no favors either.

All that said, maybe the biggest problem here is that the efforts at levity just aren’t very good. Burnham and Lt. Owosekun’s (Oyin Oladejo) coy attempt to hustle some unsuspecting brutes comes off more hokey than laugh-worthy. Book and Tarka’s efforts to spot a cheater to earn their way into the good graces of the owner is more flat than fun. And god help us when it comes to Hoz himself, our annoying master of ceremonies. He scans as a wacky gimmick character from a kids’ show, who isn’t fit to carry Lorne’s pitch pipe.

Comedy is hard, though! Going for a spritely, vaguely Ocean’s Eleven-type caper while two rival groups hustle to win what they need on a black market “karma barge” isn’t a bad idea (Star Trek: Picard tried the same thing, with similarly mixed results). But it’s not a natural fit with the oft-serious, occasionally melodramatic confines of Star Trek: Discovery, which makes wringing the humor from these events even harder. The comic material isn’t great to begin with, and shoehorning it between a grave intergalactic threat and an interpersonal breakdown makes it even more challenging.

As has become a recurring theme in Discovery’s fourth season, this is especially frustrating because what the episode’s trying to do with all of this is admirable. It might have been better to give Burnham and Book at least one episode apart before diving into their inevitable reunion and confrontation. Still, making time for the couple to hash out the fissures between their personal affections and conflicting moral imperatives is a positive.

In pragmatic terms, it makes sense that Book would use his old courier connections to achieve his goals, and that Burnham, having operated in the same network, would use those same contacts to find her runaway beau. It’s tantalizing to hear echoes of the rough-and-tumble life Michael led with Book in the 3100s before she reunited with her crew, and it makes sense to use that shared history to reconnect them. The personalities and practicalities of this one add up.

The comic material isn’t great to begin with, and shoehorning it between a grave intergalactic threat and an interpersonal breakdown makes it even more challenging.

In the same vein, “All In” dovetails with the larger political game President Rillak (Chelah Horsdal) plays here. Book and Tarka’s scheme doesn’t only threaten to aggravate a technologically superior force, it jeopardizes the consensus and faith shown in the Federation in the last episode, which spurred a fragile diplomatic solution.

Rillak is on brand when she takes Captain Burnham and Admiral Vance (Oded Fehr) to task for the personal trust they showed in the two men who absconded with the latest fancy tech. The same goes for Vance when he presents a united front when Rillak’s in the room, only to furtively tell Burnham to use her trademark creativity and resourcefulness to hunt down Book, particularly if it happens in a fashion that just so happens to coincide with her official mission.

There’s good stuff there! Burnham coloring outside the lines is a bit tired at this point, but it’s also a time-tested tack for Starfleet captains of all stripes. She and Book knowing one another’s moves, while working to obtain the same MacGuffin, is a sound setup. Highlighting the fact that they work best as a team, have a shared history to fall back on, and don’t want the other to burn any bridges with Starfleet is a worthy goal. The big picture ideas behind this season of Discovery continue to be strong.

But execution matters, especially when you’re trying to be irreverent and silly at the same time you’re trying to be grave and dramatic. The tone and texture of this one feel off, with stilted attempts at comedy and tin-eared back-and-forths that can’t support the sincerity or the humor at play. Using those ingredients to try to generate laughs and smiles amid an existential threat and personal betrayal would be a trick under the best of circumstances. Discovery, sadly, just isn’t up to the task.

Few shows are. This isn’t a new obstacle for Star Trek. Deep Space Nine offered its own raucous casino romp, in the middle of a grim war no less, with some success. But that installment had its own challenges and basically served as a break from the rigors of larger problems rather than an integral part of them. There’s no reason the world of Starfleet cannot involve the occasional loopy outing in the name of pure fun and excitement. If anything, it’s a boon to help take some of the tension out of constant outer space catastrophes. Unfortunately, Star Trek: Discovery isn’t built for that right now and goes “All In” on the wrong hand. 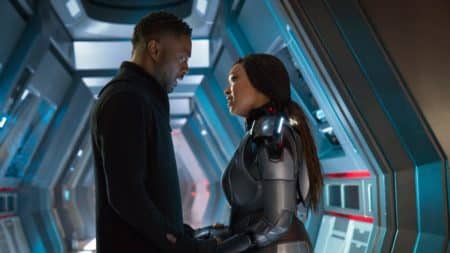 As the ship deals with a mysterious spacial anomaly, the crew deals with their own personal issues and the ascendance of a new life form - Discovery itself. 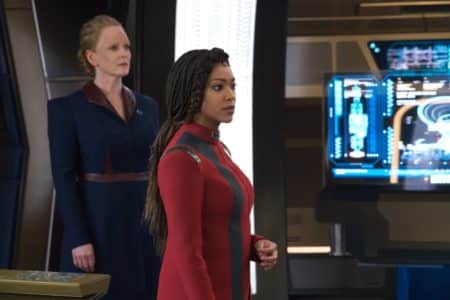 Star Trek: Discovery starts to find its footing in season 4 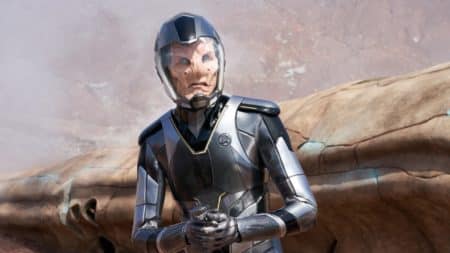 Star Trek: Discovery keeps its eye on what Trek does best – problem-solving