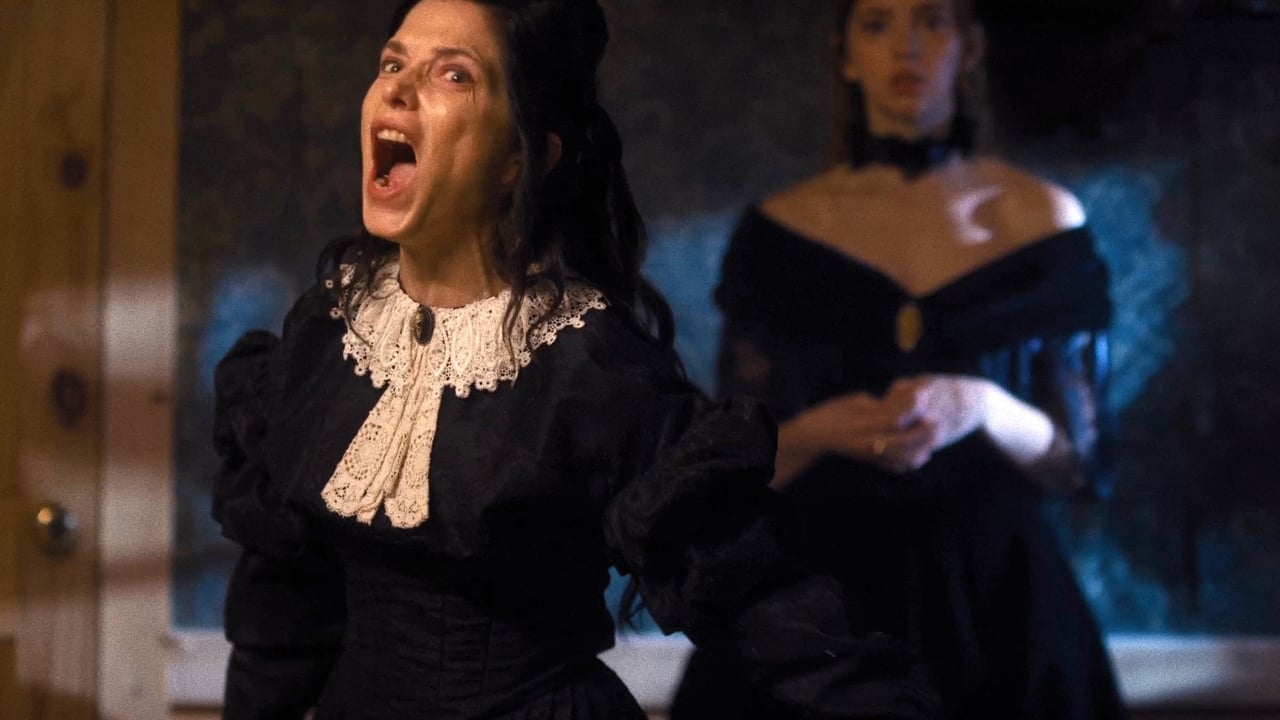 Aaron B. Koontz’s horror-western is a dusty, frightfully dull collection of cliches.

You don’t watch a movie like Aaron B. Koontz’s The Pale Door, you rewrite it in your head. Old West outlaws facing off against a coven of witches, that’s a good start for the story, it’s simply a question of restructuring everything else, like getting rid of the pointless backstory, or letting one of the already few non-white characters make it to the end alive, or maybe cutting down the number of hypermacho mustachioed men to two rather than five, or giving the witches any other motivation for their behavior than needing virgin blood to survive. Any one of those changes would have at least slightly improved The Pale Door. Sadly, it’s an inert, dreadfully dull mess that tries for some From Dusk Till Dawn-style “you thought it was this kind of movie, but it’s really this kind of movie” shenanigans, and falls flat.

After their parents are killed brothers Duncan (Zachary Knightman) and Jake (Devin Druid) have taken different paths in life. Duncan is the leader of a fictionalized version of the Dalton Gang, while the younger Jake is staying on the straight and narrow while working at a saloon. When one of the gang members is killed, Jake is recruited to join them, even though he looks like he doesn’t know which way to point his gun (evidently Old West gang union laws require a minimum number of members to complete a train robbery). During a heist, Duncan is seriously wounded, and the gang discovers Pearl (Natasha Bassett), a young woman inexplicably locked in a trunk.

In return for saving her from…whatever it is they saved her from, it’s never made clear, Pearl brings the boys back to her town, where the only business seems to be a combination brothel/first aid station run by her mother, Maria (Melora Walters). Everyone in the gang partakes in the sins of the flesh with the exception of Jake, whose sheepish confession that he’s just a little ol’ virgin, ma’am, all but sets off klaxons and air horns in the brothel.

For you see, Maria, Pearl and the other women are really ugly old witches in disguise, and after they’ve taken what they want from the men, they’re going to take Jake’s virgin blood, which is like liquid gold to them. What remains of the Dalton Gang must stop their incessant in-fighting and band together to protect Jake’s virtue from these deceitful hags.

The Pale Door is the kind of movie that wants to make sure the audience takes note of the large set of antlers mounted on the wall in Maria’s brothel, just so you’ll count the minutes before someone is impaled on them. It’s not a subtle movie, is what I’m saying.

Koontz and his co-screenwriters Cameron Burns and Keith Lansdale are capable of writing twists — they try it in a third act reveal that does nothing but besmirch the names of two characters who die at the beginning of the movie, have almost no dialogue, and no connection to anything involving witches. Given her own flashback Maria’s misdeeds seem to be rooted in some vague revenge, but after a point it becomes clear that her primary goal is to literally bleed an innocent young man dry. It’s not clever, it’s not edgy, and it’s definitely not entertaining.

Despite some familiar faces (Hardin, indie mainstay Pat Healy, a woefully miscast Noah Segan), and some halfway-decent special effects, The Pale Door feels ramshackle and amateurish. Like a lot of genre mash-ups, it comes off like the western part of the movie and the horror parts of the movie were written and filmed at separate times, then just sort of glommed together with little regard to plot coherence or flow.

All of this could be slightly forgiven if The Pale Door was written with the smallest bit, the most microscopic drop of humor, but it seems to be taking itself quite seriously. It just plods and plods towards an inevitable “It’s over…or is it?” conclusion. Lots of old timey guns are shot. A guy coughs up a live crow and dies, all in service of a plot that can basically be summed up with “You know how broads are, with the lying and all.”