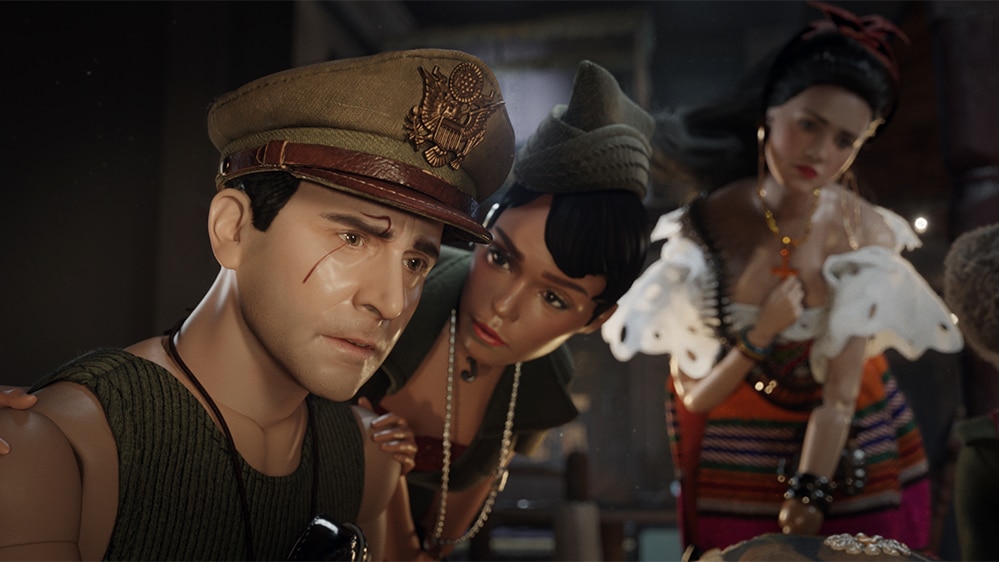 Robert Zemeckis’ latest dive into the Uncanny Valley turns a real-life story into a schmaltzy feel-good tale of a man served by the doll-like women around him.

Is there a phrase in film that inspires such uncertainty as “based on a true story?” It could mean you’re on the verge of seeing the newest Oscar nominee, a saccharine, kind-hearted feel good tale that lives more in “based” than “true.” Or…or you get the kind of movie Robert Zemeckis gives us with Welcome to Marwen: a film that does more to celebrate the person that to tell a story complete with qualities as well as flaws.

Welcome to Marwen follows illustrator-fatefully-turned-photographer Mark Hogancamp (Steve Carell). Following a near-fatal beating at the hands of a gang of Neo-Nazis, Mark loses all of his memory prior to that horrible moment. To cope, he has created a miniature WW2 Belgian village in his backyard called Marwen. The little town is populated by a troop of badass Barbies and Hogancamp’s warrior version of himself, Cap’n Hogie. Through this world he tells the story of Cap’n Hogie and his “Dolls” battling a group of undying Nazis and the Belgian Witch, Deja Thoris (Diane Kruger). In the real world, Mark faces the upcoming sentencing of the men who beat him, endures his persistent friend Roberta (Merritt Weaver) doing everything she can to get him to attend his own art showing, and meets a new neighbor, Nicol “without an E” (Leslie Mann), whom he falls in love with.

As co-writer and director, the faults of Marwen fall directly on Zemeckis’ shoulders. It’s clear that he has great respect for what Hogancamp has been through, but this results in the character being treated with a self-destructive preciousness. Mark is beloved by everyone in town; we meet him on the verge of a life changing success; he has an addiction to opioids, but we don’t really see how that has changed his life. The spirit of Deja often tempts him to take more pills than he should, but his addiction never affects his life or choices. It becomes more of a McGuffin composed of a national crisis.

The worst thing, though, is that by making Mark so beloved and bereft of consequential flaws,his actions and art can come across as massively creepy. The Dolls of Marwen are all based on women that Mark considers friends or who have helped him during his recovery – including Nicol and Roberta, as well as rehab friend Julie (Janelle Monae) and his Russian caretaker Anna (Gwendoline Christie). They fawn and swoon over him, never have a bad word to say and never once back-talk Cap’n Hogie. He is constantly perfect, and they must always do as he says. This lack of tension gives the feel of a ‘40s USS Callister – Hogie controlling a bevy of “dames” for his own devices. With that kind of set-up, it becomes all the more unsettling when Mark creates a doll of Nicol who immediately becomes Cap’n Hogie’s true love.

Along with the creep factor, the lack of tension between characters in Marwen leaves so much potential plot on the table. Marwen clearly acts as Mark’s inner thoughts, so for him to have a world where he is perfect makes it feel like he has no issues with who he is, and no subconscious worries about the faithfulness of his friends. The film spends so much time in the world of Marwen that it ends up becoming a stress-less, Boomer-friendly Sucker Punch: a man literally playing with his dolls, who have no character, depth, or quality beyond looking pretty and serving him.

The thing is, Marwen isn’t really a flawed idea – the documentary Marwencol, about the real guy, is a far more intriguing and fascinating telling of the story than the antics on display here. In the hands of a director with more experience in magical realism (say, Michel Gondry), the real world and Marwen could have had far more of a consistent connection. One of the best moments of the film comes when one of Mark’s panic attacks causes a firefight to erupt from Marwen and into his home. The fantasy danger of Marwen becoming a real manifestation of his traumas is a fantastic raising of the stakes, but sadly, there is no further escalation of these moments. So often the movie just feels out of Zemeckis’ hands. He really wants to make it work, but just doesn’t have the capability to bring both worlds together. (It’s a problem he has with the rest of his CG boundary-pushing oeuvre like The Polar Express.)

Much of the acting seldom raises into the realm of memorable. Carell has a few moments that, on their own, highlight why he has garnered award nominations in the past. But, again, so many of his strongest moments in the film are hampered by odd directorial choices: after one of his more heartbreaking moments, Zemeckis chooses to follow it up with a meta, self-referential joke that just destroys any heartache inspired by the previous scene. The usually wonderful Leslie Mann sounds lost in her cookie cutter dialogue, but at least compared to the other Dolls, she has some personality. The rest are left with small moments in the real world and Syndicate Comics-level dialogue in Marwen.

It really is a shame that a movie with so much potential fell so short. Welcome to Marwen is a story rife for discussions about war, trauma and identity, but it feels like Zemeckis couldn’t get out of his own way. In the end, what could be a sweet story about redemption and recovering from crisis turns into a schmaltzy, unsettling turn into the Uncanny Valley.

Welcome to Marwen is currently out of the toybox and in theaters now.