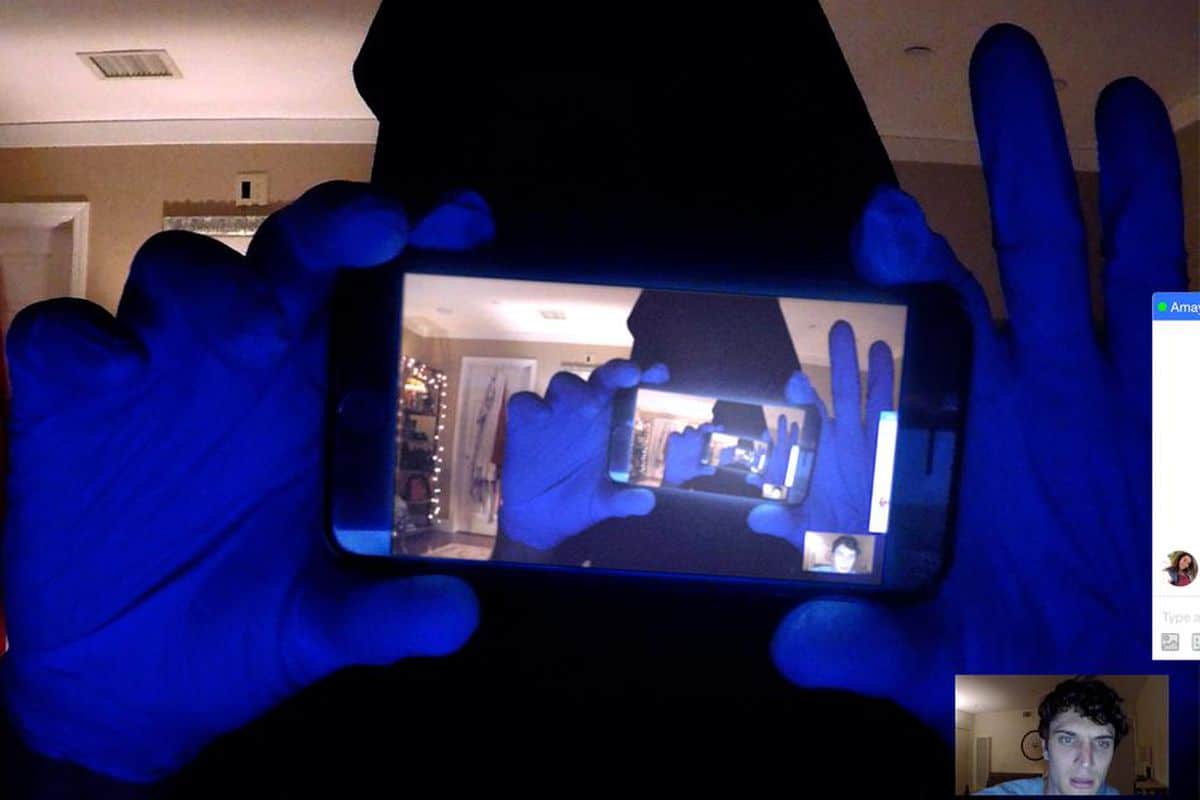 We live in an age of overwhelming technology. Most of us spend most of day in the digital world, our computers becoming individual microcosms containing our entire ecosystem. Facebook, Skype, Spotify, etc., have all become our invited inhabitants and facsimile friends. These days, we don’t have to leave home to face daily horrors because they can and do take digital form. Unfriended: Dark Web reminds us that there are terrors lurking in our technology.

The follow up to 2014’s Unfriended, Unfriended: Dark Web utilizes the same cinematic conceit where all of the action happens on a computer’s desktop. It’s long distance game night via Skype, and on the docket is a little Cards Against Humanity with a side of crimes against humanity. This group of friends find themselves trapped in a game of sorts by some hackers after Matias (Colin Woodell) discovers strange and incriminating videos on his new laptop. The story then turns into an onscreen juggling match as he tries to reconcile with his girlfriend, while making sure his friends don’t do anything to upset the hacker group that he is trying to appease. You know, a typical Tuesday night on the internet.

Horror director Stephen Susco (The Grudge 1 & 2) helms this sequel, but makes it almost unidentifiable from the original. Unlike his previous films, Susco shifts the genre from the paranormal, ghost in the machine horror established by the first Unfriended and turns it into a tech-based suspense/thriller. The only ghosts in this film are the ghosts of each character’s pasts. The scariest thing about the information we willingly put online is its immortality – more terrifying than any monster or creature, our undying online information can be used against us at any moment.

Susco understands that we don’t need the supernatural to create a scary scenario: our reality is terrifying enough. One hacker can destabilize countries, topple companies, and destroy lives. He uses our minimal understanding of the dark web to craft an ominous ambience that feeds into our existing fear of hackers.

Susco spends the first act of the film establishing the roots of their friendships, which he does naturally by playing up the mundanity of their interactions. Unfortunately, that does no favors for the pacing as the film literally becomes watching a guy check his Facebook, which in turn makes us wish were checking ours instead of watching this film. Don’t worry because like the characters, this feeling is short-lived. As the mystery begins to build, so does our invested attention in the film. Susco’s creates suspense in a way that is both expected and necessary. After we’ve been lulled into a false sense of security, he sprinkles kernels of information that create an unease inside of us.

Unless this is the very first horror film you’ve seen in your entire life, you can already guess what the film’s endgame will be. The destination doesn’t matter as much as the cyber journey, and Unfriended: Dark Web exploits our knowledge of the first film’s more supernatural elements and gives them a real-world technological boost that proves Arthur C. Clarke right: “Any sufficiently advanced technology is indistinguishable from magic.”

Susco continues to diverge from the typical horror crutches when he opts to not show any gratuitous violence or gore on-screen. That’s not to say that these things don’t happen in the film, but they occur at the very edge of our periphery, so we’re forced to use our imagination. Instead of relying on visualizations of violence, all we are given are auditory cues, leaving us to piece together what is happening. It’s always nice to see a horror film that doesn’t treat the audience like mindless viewers. This not only maintains engagement, but also puts them to task in creating their own interpretation of what is happening off-screen. Nothing can scare us worse than we can scare ourselves by using our own imaginations.

Although this film follows many of the same techniques from its predecessor, one refreshing new aspect is the diverse casting. While the entire cast does a great job at playing your average twenty-somethings, the real standouts are deaf actress Stephanie Nogueras (Switched at Birth) and emerging horror icon Betty Gabriel (Get Out, The Purge: Election Year). Alongside Connor Del Rio, Rebecca Rittenhouse, Woodell, and Savira Windyani, the cast feels well-rounded and like an accurate representation of an average friend group, making it much more relatable and easier to invest in the characters.

In the end, well-rounded is the best way to describe a film that takes the best part of its predecessor and creates something much better. Unfriended: Dark Web doesn’t break the Internet, but it did mostly manage to break the mold set by the first film.