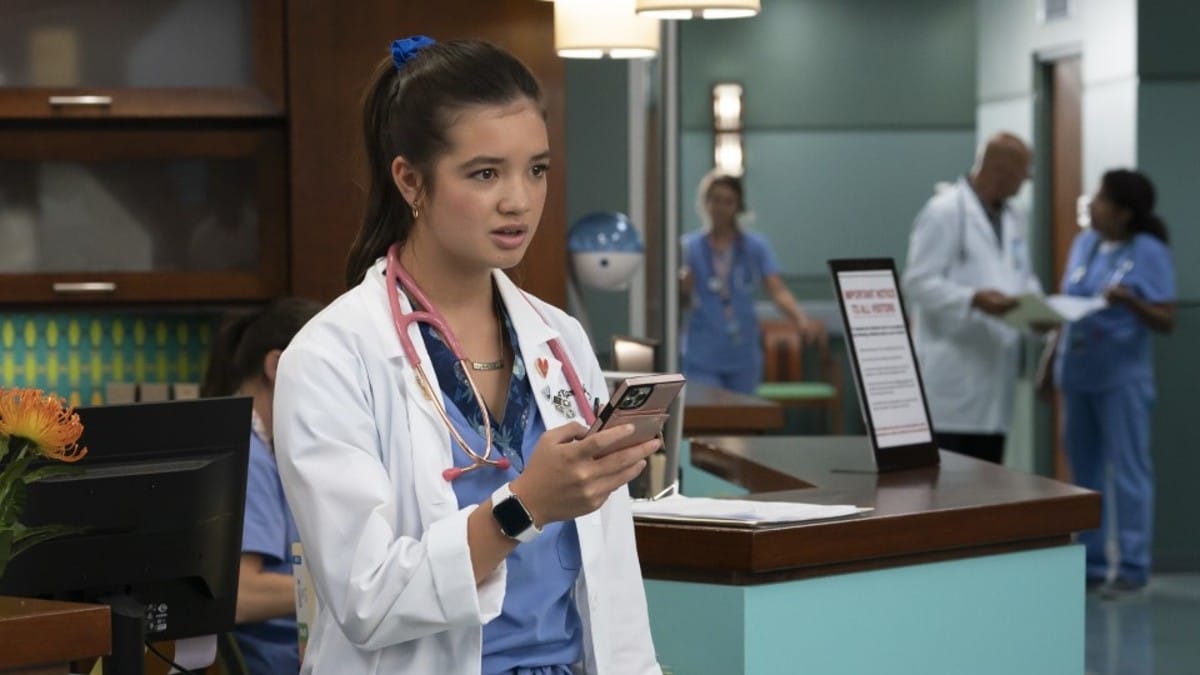 Disney+’s latest revival is too beholden to the past for its own good.

Hollywood’s love for familiar brands has long since transcended parody and probably reached that point when a generic Transformers knock-off got slapped with the name Battleship. It’s almost scary how unsurprising the thought of somebody reviving the 1990s TV show Doogie Howser, M.D. as a streaming show is despite there being no clamor from the general public for such a property. As far as I know, no die-hard Doogie stans are taking to the streets demanding more stories about teenage doctors getting into shenanigans.

And yet, here we are with Doogie Kameāloha, M.D., which can be added to the long list of modern pop culture properties that would be so much better if it wasn’t tied to some older piece of media from the past.

The inaugural episode of the series, “Aloha – The Hello One”, takes many of its beats from the pilot of the original Doogie Howser, M.D. These include a cold opening where the titular protagonist (here played by Peyton Elizabeth Lee) pauses a driving exam to help an injured person on the side of the road. Both episodes also use a 16th birthday as the central backdrop for the story. Meanwhile, the conclusion of “Aloha – The Hello One”, like many Doogie Howser episodes, see’s Doogie reflecting on the events of the episode, though here Doogie does that reflecting through a vlog.

Was George Lucas in charge of Doogie Kameāloha, M.D.? If not, then what’s with all the rhyming with the original Howser? One can’t help but feel bad for Kourtney Kang, series developer, and writer of this premiere episode, for clearly being boxed in with the past. This initial episode is so busy trying to hit the familiar beats for a handful of Doogie Howser fans that it often forgets to establish a distinct identity. This problem gets crystallized in a closing beat wherein Kameāloha opts to embrace the nickname “Doogie”, a beat meant to satisfy longtime fans of the brand but doesn’t pay off in the episode.

All these clumsy nods to the past disappointingly distract from the more original concepts that Kang and others have brought to the table. Most notably, Jason Scott Lee as Benny Kameāloha is a total delight. The consistently underrated Lee is always a treat to see onscreen here but he equips himself quite well to the role of a consistently supportive figure to both his daughter and his wife, Dr. Claire Hannon (Kathleen Rose Perkins). Lee strikes just the kind of endearing vibes you want from a show like this one.

Meanwhile, the mother/daughter relationship established in “Aloha – The Hello One” also works just fine as a groundwork for drama. Pop culture tends to default to the idea of mothers knowing everything about parenthood backward and forwards while the dads are the only ones who could ever have issues with raising a child. It’s nice, then, that Doogie Kameāloha M.D. opts to make Claire the one that’s having trouble connecting with her offspring as she tries to enforce an 11:00 PM curfew on someone that can perform surgeries.

All these clumsy nods to the past disappointingly distract from the more original concepts that [developer Kourney] Kang and others have brought to the table.

It’s not the most groundbreaking demonstration of conflict, but considering Doogie Kameāloha M.D. is aiming for the same kind of entertainment ABC used to deliver on their TGIF line-up, it’s a rapport that gets the job done. Kameāloha’s youngest sibling, Brian Patrick (Wes Tian), also proves a standout member of the cast just from short bursts of screentime. Here’s hoping future episodes make heavier use of this adolescent character being amusingly stuck in his own little overdramatic world.

As for Doogie herself, the show is so far too affectionate to homaging older TV programs or adhering to predictable narratives for the character to truly get fleshed out. At least Lee is a charming performer and she deserves props for handling some of the clumsiest lines of the episode. If she can manage to talk about her friend “frontal grinding” on her younger brother Kai (Matthew Soto) without totally losing the audience, then Lee has enough talent to push her character into more interesting territory going forward.

Right now, Doogie Kameāloha, M.D. is a predictable show on many fronts, including its slavish devotion to the original program, its ways of appealing to “the kids of today” (TikTok gets name-dropped multiple times), and even in its references to other Disney properties like High School Musical or Doc McStuffins. In those regards, its table-setting episode doesn’t offer much hope that viewers will get any truly unique dishes throughout the first season.

The better aspects, like the embracing of a complicated mother/daughter dynamic and supporting performances from the likes of Lee and Tian, suggest this show could eventually elevate itself beyond being a Disney Channel sitcom that misplaced its laugh track. We didn’t need a Doogie reboot, but there are hints that Doogie Kameāloha M.D. has the power to justify its existence. After this, though, let’s all cool it with the 1990s TV show revivals…unless someone wants to take another crack at Poochinski!