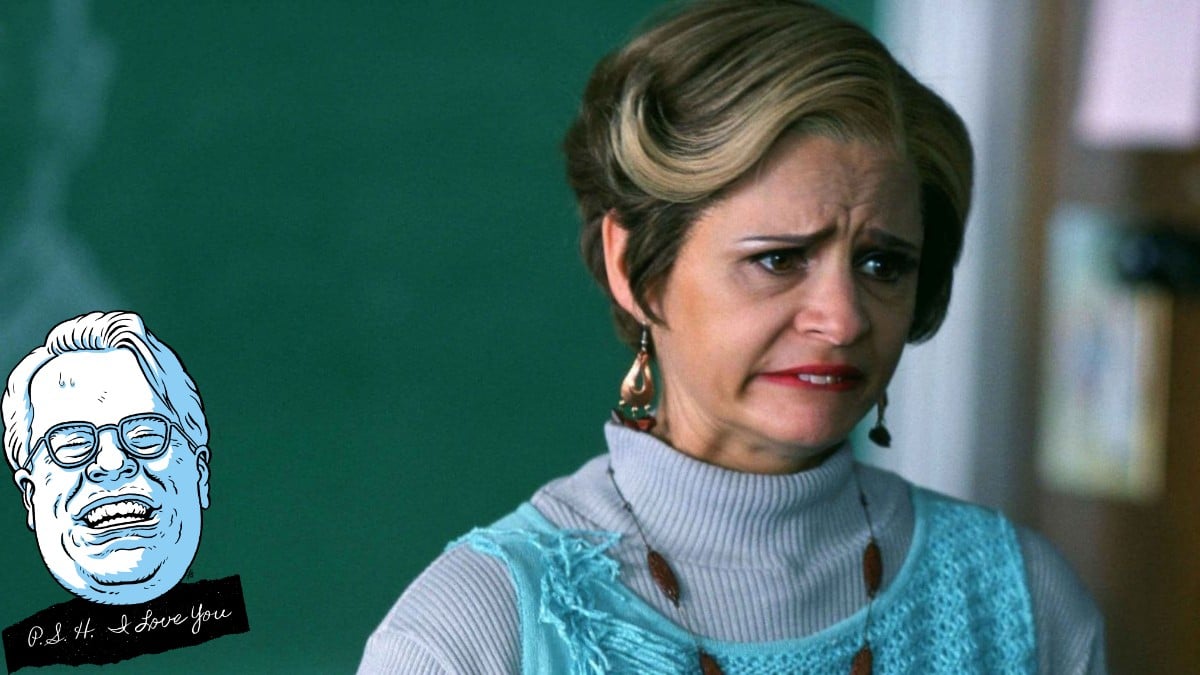 Only diehard Hoffman completists need to see his appearance in the movie spinoff of the poorly aged Comedy Central cult sitcom.

Philip Seymour Hoffman could’ve been a comedian, or at the very least, a character actor known solely for comedic roles. In Twister and later Along Came Polly, he played loud supporting parts so effectively that they enriched their movies as a whole. He didn’t just know how to be hilarious, he committed to his work in comedies with the same rigor that illuminated recursive nightmares and won him an Oscar. That said, not every comedy Hoffman showed up in brought the house down. Strangers With Candy is almost entirely incomprehensible, which wouldn’t necessarily be a problem if it wasn’t so constantly offensive.

For those who don’t know (I certainly didn’t), Amy Sedaris, Stephen Colbert, and Paul Dinello created and starred in Strangers With Candy, a show that ran for about a year (it aired on Comedy Central, the same time Colbert was appearing on The Daily Show). Sedaris plays Jerri Blank, a 40-something ex-convict who decides to go back to high school, with the series envisioned as a broad satire of after-school specials. Billed as a prequel, the Strangers With Candy movie reunited the cast five years after the show was cancelled.

Again, the set-up makes no sense, and does a very poor job pulling in viewers who didn’t see the show. Jerri is released from prison (Who is she? Why was she in jail?). She discovers her mother has died and her father is in a stress induced coma. Apparently, if she picks up her life right where she left off (before she ran away? Or went to prison?) he might wake up. Sedaris always has a certain chaotic energy, channeled here into a noisy tramp with an overbite. She’s usually either mugging to the camera or making a racist joke.

There’s an occasional charm to some of the humor here – but for every gag Strangers With Candy lands, it follows-up with two more you wish it hadn’t even tried. The family doctor rides down the stairway banister for no reason. Instead of track or wrestling, all the school jocks are really into “squat thrusting.” This stuff still holds up alright.

Strangers with Candy is almost entirely incomprehensible, which wouldn’t necessarily be a problem if it wasn’t so constantly offensive.

But when the satire isn’t absurd, it’s just lazy, pointless, and potentially hurtful. Colbert plays Jerri’s science teacher Chuck Noblet; his character is married and has a kid, but he’s also in a secret relationship with the art teacher Geoffrey (Dinello). It’s nowhere near as progressive as the movie thinks it is. Jerri has a friend who is Indonesian, and he’s named “Megawatti” so he’s the butt of a bunch of jokes. The school principal is Black man named “Principal Blackman.” I can’t quite say Strangers with Candy punches down too often – its fingers are going in too many different directions to form a fist.

Hoffman shows up as one of the members of the school board, alongside Allison Janney. They’re investigating Principal Blackman for misappropriating school funds. Through the scene, the principal and Janney’s characters keep implying that they used to sleep together, and Hoffman’s suspicious glances at the pair is one of those bits that works. None of these characters are convincing or well-written, but all three actors play it straight enough that it’s funny. As they leave the principal’s office, Hoffman yells “I have a right to know, I’m on the school board!” For a moment, it feels like the film has its act together.

His only other scene doesn’t fare as well. Hoffman shows up again for the climax, in which Jerri’s team of misfits has to defeat the popular kids at the science fair competition. Sedaris does an unfortunate dance imitating Indonesian culture, and then their science project – which is made out of poop – sets the gym on fire. If you’re searching for a comedy co-starring Hoffman that doesn’t shart the bed, you’ll have to look elsewhere.