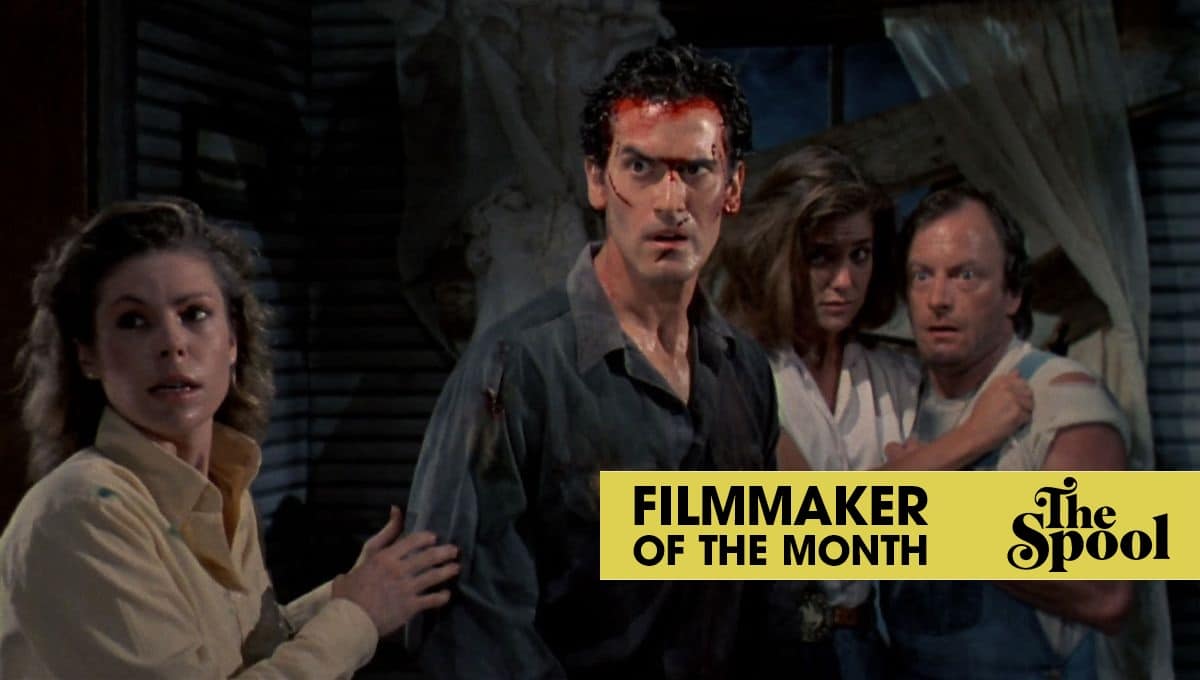 A true artist’s work never ends. This sentiment was drilled into me and my fellow students all throughout film school. There are always tweaks, adjustments, edits to be made to any work of art, but especially a film. It’s the reason why we have Director’s Cuts in the first place. How many different versions of Blade Runner or Apocalypse Now! have been foisted on us over the years? Stanley Kubrick was still making cuts to The Shining a week after it was in multiplexes. Do we even need to bring up The Star Wars Trilogy Special Edition? I didn’t think so.

That being said, there has truly never been a cinematic Mulligan like the one Sam Raimi and his ragtag Michigan cohorts called when making 1987’s Evil Dead II. Coming at a pivotal, make-or-break moment in their careers, Raimi and co. bet the farm, called in a few helpful favors from powerful industry connections, and most importantly, saw the potential in remaking their cult classic debut film, 1980’s The Evil Dead, for, if not a wider audience, then at least a weirder audience. Oftentimes, weirder is better.

While shooting The Evil Dead, Raimi began toying with an idea for a sequel, which would find square-jawed hero Ash (Bruce Campbell), time-traveling back to the middle ages to fight an army of Deadites, the soul-swallowing baddies of the first film. Eventually, that idea was shelved in favor of Crimewave, a darkly comedic film noir parody directed by Raimi and co-written with his roommates, Joel and Ethan Coen. Released in 1985, the few critics who bothered to review Crimewave panned it, and it was a box office bomb. Raimi’s once-promising career was looking like it might be Dead by Dawn.

Following the failure of Crimewave, Raimi got together with Campbell and producer Robert Tapert, and decided to return to that long-gestating Evil Dead sequel, which had the working title Evil Dead II: Evil Dead and the Army of Darkness. Around this time, Raimi was approached by studio magnate Dino De Laurentiis, of DEG Pictures, about directing an adaptation of Stephen King’s Thinner. Raimi declined the offer, but this would prove to be an important catalyst in the birth of Evil Dead II. A rave review penned by King was a big reason why The Evil Dead became such a sleeper hit, and when he heard of the troubles Raimi was having getting the sequel off the ground, King convinced De Laurentiis to fund the film.

Ultimately, DEG coughed up $3.6 million, just shy of the $4 million that Raimi had initially asked for. De Laurentiis was also not interested in a medieval period piece, and instead requested something more in the vein of the cabin in the woods-style horror of the original. This forced Raimi to get creative. He called up childhood friend and early collaborator Scott Spiegel, and the two quickly got to work on writing what would become Evil Dead II.

First step: get the entire plot of the first film (five friends, weekend getaway, Necronomicon, horror ensues) out of the way in five minutes. Second step: pair down the original cast to just Ash and his doomed girlfriend, Linda. Third step: lean into the slapstick comedy styles that the pair had been raised on, while still maintaining the ghoulish, Grand Guignol horror of the first film.

Horror and comedy had intermingled in the past, but never with the insane gusto that Raimi and co. conjure up here. Today, it’s easy to forget that Evil Dead II is often imitated, but never has it been duplicated. The result is truly unlike anything seen on film before or since. It’s akin to watching a Roadrunner cartoon in the midst of a bad acid trip, or a Three Stooges short helmed by Herschell Gordon Lewis. These are horrifying comedy bits, or comedic horror bits, depending on who you ask. But no matter who you ask, they’re totally goddamn awesome.

There are so many bravura set pieces here that it’s nigh impossible to pick a favorite. Ash’s undead girlfriend Linda doing a headless, moonlit ballet, then bursting through the shed with a chainsaw? The endless tracking shot following Ash through the cabin as he breathlessly escapes from the first-person zooming camera of doom? Ash fighting his mirror self? Ash fighting his own chain sawed off hand? The tiny hole in the wall with a trickle of blood that soon turns into a geyser? Every inanimate object in the house laughing at Ash?

Then there’s Henrietta, the basement-dwelling old lady demon, embodied under pounds of makeup and prosthetics by Raimi’s long-suffering brother Ted. It’s rare that you genuinely don’t know where a film is going to go from moment to moment, and even more rare that that film continues to top itself with each new batshit insane story beat.

Horror and comedy had intermingled in the past, but never with the insane gusto that Raimi and co. conjure up here.

Make no mistake, Evil Dead II would not work nearly as well as it does without Campbell in the lead. As a character, Ash has to walk a fine line: from goofy everyman to grieving, bedeviled boyfriend to chainsaw-armed badass. To Campbell’s credit, he nails each beat seamlessly. Like Leslie Nielsen in Airplane, Campbell treats all of the insanity happening around him with the utmost seriousness. I can’t tell you how often my dirtbag 8th-grade buddies and I would yell at each other, “Nooooo, you idiot! [dramatic pause] You’ll kill us all!”

Most importantly, he commits to the physical comedy to a degree that would make Harold Lloyd proud: throwing his body around, smashing plates on his head, getting spun around a full 360 degrees. No matter how much it must’ve hurt, Campbell commits wholeheartedly, like you do when working with someone you trust implicitly.

A large part of Evil Dead II’s charm lies in how much fun everyone was having on set, and how apparent that is in the final product. Whereas The Evil Dead was by all accounts a costly and time-consuming nightmare to shoot, Raimi and co. had much more time and money to complete Evil Dead II, not to mention years of shooting experience under their belts. Raimi may famously wear a suit to set every day, a nod to Alfred Hitchcock, but his films are anything but buttoned-up.

If anything, maybe the Evil Dead II gang was having too much fun: upon viewing the final film, studio execs feared that it would inevitably be saddled with an X rating (in order to get an R, one suit joked, Raimi would’ve had to cut the film down to about an hour). So, they decided to release the film unrated through a shell company run by one of Dino De Laurentiis’s sons.

Opening on March 13, 1987, the film had a middling showing, grossing just $807,260 on 310 screens. However, word of mouth began to build, and by the end of its run, Evil Dead II had grossed $10.9 million worldwide. It certainly helped that reviews were surprisingly positive: Roger Ebert charmingly described the film as “a fairly sophisticated satire, that makes you want to get up and shuffle.” Even better was Caryn James’s review for The New York Times, which proved to be oddly prescient, calling the film “genuine, if bizarre, proof of Sam Raimi’s talent and developing skill.”

A large part of Evil Dead II’s charm lies in how much fun everyone was having on set, and how apparent that is in the final product.

Not only that, Evil Dead II ultimately proved to be the genuine, if bizarre, beginning of an unlikely franchise. Raimi eventually did send Ash back to the middle ages for the overtly comedic third entry in the franchise, 1992’s Army of Darkness. The property received a shockingly-not-terrible soft reboot in the form of 2013’s Evil Dead before Campbell triumphantly reprised the role of Ash for the beloved series Ash vs. Evil Dead, which ran on Starz from 2015-2018.

After that, Campbell announced that he was officially retiring from the role. As for his longtime friend and frequent collaborator, Sam Raimi has been fairly quiet since his last film, 2013’s Oz the Great and Powerful. Should all go to plan, he’ll bring some of that chaotic energy of his to the Marvel Universe in 2022 with Doctor Strange in the Multiverse of Madness. Truth is, even if he never made another film, Raimi’s legacy is long solidified. Evil Dead II remains the perfect blood-splattered horror-comedy. Groovy indeed.