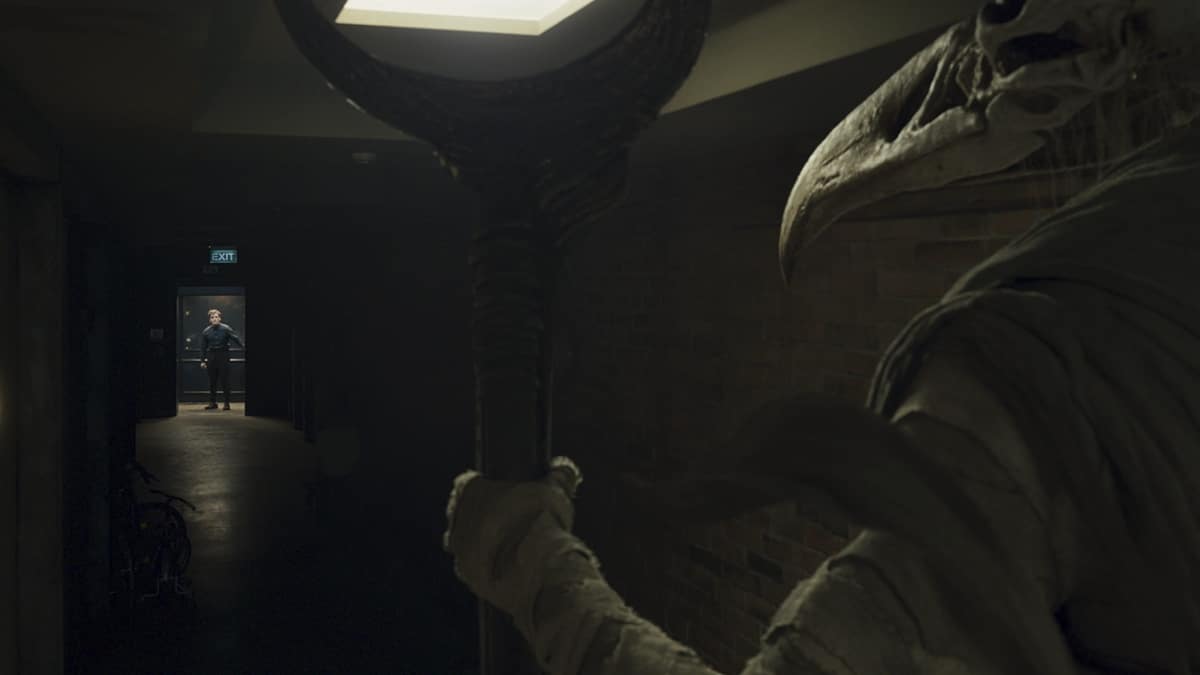 The MCU’s latest streaming series gets weird, but it only partially works.

Much of the pre-release publicity about Moon Knight focused on the heightened brutality of the new MCU on Disney+ series. In doing so, all involved failed to mention how much stranger it would be than the average MCU streamer.

When that strangeness works, it gives the show an enjoyably off-kilter edge. The more Moon Knight’s god/mean daddy boss Khonshu (body by CGI, voice by F. Murray Abraham) comes into the light, the more wonderfully unnerving and endearing he becomes. Scenes of the god’s giant skeletal bird body wandering through a well-attended bazaar or relaxing against a car are strong mergers of the bizarre and benign. They’re the sort of the thing the show should strive for more often. The fourth episode suggests a certain awareness of this necessity. It packs on the mix of mystical and run-of-the-mill, culminating in a realm best described as purgatory meets a locked mental health facility.

Unfortunately, when the strangeness doesn’t work, it flips rapidly over into goofy. For example, when we first meet Steven Grant (Oscar Isaac), a museum gift shop employee who can’t catch a break. Isaac leans hard into an accent just this side of Oliver, wringing some genuine fun out of the nebbish Grant. Still, the character is too ill-defined early on to truly engage the viewers. Additionally, we know he’s one alter of a man with Dissociative Identity Disorder. Laughing at some of his predicaments given that feels a bit mean-spirited.

In general, Moon Knight does better than most fictional depictions of DID, but that’s a very low bar. At its best, it demonstrates how quickly and easily the diagnosis can get you marginalized. A meeting with HR and a trial by Egyptian God avatars show how some use the disorder to dismiss. In place of genuine empathy, viewers witness them quickly switch to paternalistic pity.

Even at its worst, it’s never as ridiculous as, say, M. Night Shyamalan’s Split or Glass. However, it does frequently run towards the clichéd. It isn’t long before every puddle or mirror becomes an invitation for the alters to talk to each other. It’s not so much inaccurate about DID as it is the same old visual language.

[Moon Knight]‘s a mixed bag whose success lies in the performances of Isaac, Hawke, and Abraham.

Speaking of visuals, the costuming, especially on Moon Knight and Mr. Knight—a white three-piece suit-wearing version of the hero—are striking in exactly the right ways. Arthur Harrow (Ethan Hawke)—the series villain—has a far less eye-catching but nonetheless appropriate look. As a former avatar of Khonshu, Harrow knows the attention the vestiges of Moon Knight bring. Therefore, he chooses shapeless garments in sherbet colors that make him both comforting and easy to dismiss as a non-threat.

Mohamed Diab and the team of Justin Benson and Aaron Moorhead split directing duties on the series. Diab directs four of the six, including two of the episodes given to critics. Benson and Moorhead helm episodes two and four. Both of their installments take bigger swings than the Diab-directed first and third episodes, with mixed results. When Benson and Moorhead nail it, as with episode four, the result is surreal and captivating. When they don’t in episode two, viewers end up back in the realm of the goofy. Moon Knight fighting an invisible jackal monster should make for something spooky and disquieting, but it never visually coheres. And if humor is the intent, it never gets funny, only silly.

However, the single biggest issue impeding Moon Knight is pacing. Disney+ provided critics with two-thirds of the episodes. It isn’t until episode four that the show finally seems to be heading in a direction. It’s not that episodes one through three are devoid of event or occurrence. It’s just that with the show’s limited runway, they feel strangely unhurried to nearly the point of meandering. With less than two hours left, the show has several pieces in play but none particularly close to resolution. Additionally, for a show called Moon Knight, it provides very little of either version of the white-wrapped wielder of vengeance.

It’s a mixed bag whose success lies in the performances of Isaac, Hawke, and Abraham. Once Isaac gets past the first episode, he settles into the dual role well. The show really turns when the writing team led by Jeremy Slater begins to add depth to Steven. Isaac gets more to do with him and Grant stops reading quite so broad. Hawke nails the benevolent cult leader vibe well. Hopefully, the final two episodes give him a chance to go a bit bigger. Finally, Abraham does a lot with a little, making Khonshu seem violent, cruel, selfish, and intensely lonely with limited lines and an evolving tone of voice.

For viewers who have increasingly complained that the MCU plays it too safe, too rarely risks going big and weird, Moon Knight may provide some of what they want. For others, it might feel like a reminder that a sense of consistency, be it across a universe or within a single show, isn’t necessarily a bad thing.

What If…? explores the roads not taken for better and worse

Marvel Studios rolls out its most insular effort to date on Disney+ with plenty to please the fans.