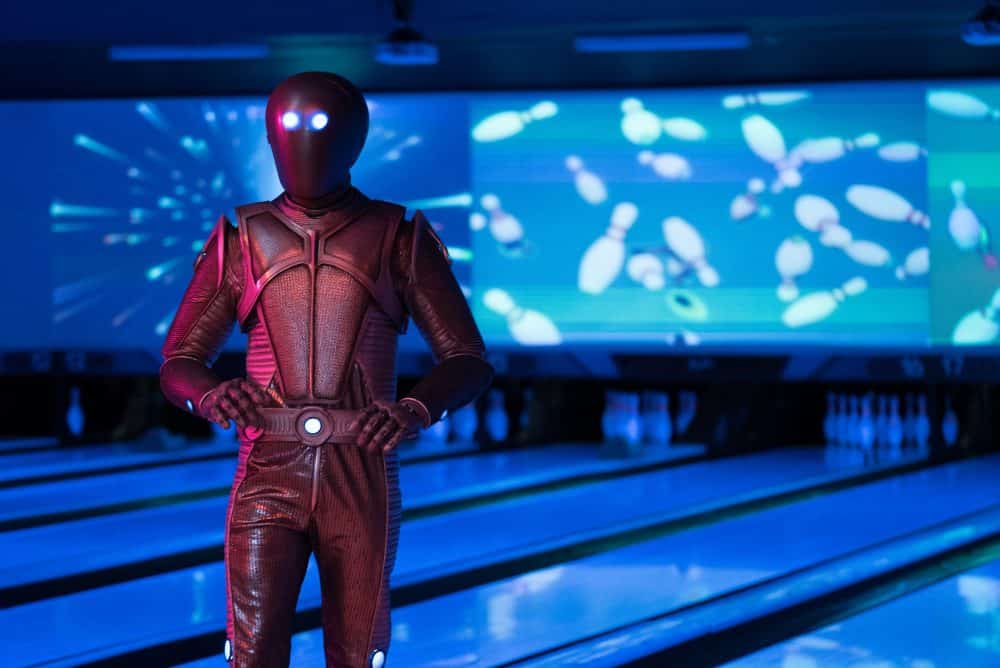 The Orville solidifies its status as the kinder, gentler Star Trek with a sweet, sincere episode about the love between a woman and her robot.

The Orville‘s mission statement as pretty much a slightly goofier continuation of Star Trek: The Next Generation has long been established – much like the Federation’s flagship, the Orville feels like a luxurious spaceship with a lot of downtime. Not every week has to be a life-or-death space adventure; in fact, most of season 2 has been occupied with smaller-scale stories honing in on a few characters handling grounded, down-to-earth situations, just aboard a spaceship. So it goes with “A Simple Refrain”, an episode with no laser beams or showdowns with despotic alien civilizations – just a simple, impossible love story that ends up being far sweeter and more complex than you’d think.

Written and directed by Seth MacFarlane, “A Simple Refrain” builds on the budding friendship between Dr. Claire Finn (Penny Johnson Jerald) and the Kaylon robot Isaac (Mark Jackson), which really started blossoming in season one’s “Into the Fold”, when the two were involved in a shuttle accident with Claire’s kids, Marcus (BJ Tanner) and Ty (Kai Wener) and bonded through the experience. Now, Claire is beginning to realize she may have feelings for and wants to explore a relationship with him.

This may seem a bit inexplicable – Isaac, after all, is a Kaylon, a race of robots who are, in Capt. Mercer’s (MacFarlane) words from the pilot, “legendarily racist.” Isaac is only on the ship on a fact-finding mission for his people, with the goal of gathering data on the Unions’ various member races to help determine whether the Kaylons would join the Union. But Isaac has clearly grown close with Claire himself, teaching Ty how to expertly play the piano and consulting with Claire on scientific papers. “There is a human phrase: you should be very proud of him,” he says of Ty to Claire after he nails his recital. These moments and more, she confides to Cmdr. Grayson (Adrianne Palicki), endear him to her in a way she didn’t expect before.

And thus begins the most interesting element of the episode: what happens when a human tries to date a robot? The idea’s been explored before, particularly in Star Trek: The Next Generation‘s “Data’s Day”, in which the Enterprise‘s android attempts to learn about love by dating a random, one-off crew member. But here, The Orville takes the big step of exploring the romance between two of its regulars, which raises the stakes in a surprising way for an episode that amounts to a relatively anemic rom-com on a starship.

To his credit, MacFarlane continues the show’s increasing abandonment of its mistimed, sitcommy jokes in favor of a winsome, leisurely-paced unfurling of the episode’s central concept, and his character work is outstanding here. The ebb and flow of Claire and Isaac’s on-again, off-again relationship flows along deeply relatable lines: most, if not all, of Isaac’s victories and mistakes make sense within the confines of his programming. When he and Claire go on their first date in the simulator, he makes the mistake of looking up her personnel file and instantly knowing everything about her, which ruins the mystique for Claire. Then, he overcompensates for her need for spontaneity by showing up with a cake at three in the morning. At every turn, the episode keeps us mostly at arm’s length about Isaac’s true motivations – is he just trying to gather data, or does he want something more?

As for Claire, “A Simple Refrain” is a wonderful showcase for Johnson Jerald, giving the Trek alum plenty of opportunities to showcase her incredible command of a scene. Claire’s always been one of The Orville‘s best and brightest, a skilled medical professional with great bedside manner and a good head on her shoulders, and it’s nice to see a show (especially in science fiction) center itself on a romantic subplot for a woman over 40. Her relationship with Isaac has always been interesting – their friendship being a mixture of professional respect and genuine curiosity – but taking it to this next level brings out new, subtle layers in Johnson Jerald’s performance. Most striking is her patience with Isaac; even when he makes enormous blunders like pushing her away by simulating a deadbeat boyfriend (“as I am incapable of stuttering,” he chides, “I can only presume you heard me”), complete with wife-beater and stained tighty-whities, Claire’s subdued reaction is understandable. She knows he can’t possibly understand the effects of his actions; he’s a robot, after all.

And yet, within the unconventional romance of “A Simple Refrain”, Isaac manages to grow quite a bit as well. It’s easy to underestimate Jackson’s performance as Isaac, given that his expressive face is hidden behind a blank, egg-shaped grey mask, but his physicality is delicate, like a dancer’s. Luckily for Jackson, simulator provides him with the rare opportunity to step outside the suit, as Isaac attempts to relate physically with Claire by projecting a simulated human body over his own (the real Jackson, and his delicate, twinkish features, get a chance to shine). It’s here that the relationship takes some sweet, if… interesting turns, but it’s a delight to see Isaac’s ‘true face,’ for lack of a better term.

It’s tough to rotely recap the ups and downs of what Claire and Isaac’s relationship go through, but suffice to say it ends on a sweet note befitting the kind of show The Orville has become – not a workplace sitcom, not a Family Guy riff-fest, not even strictly a Trek pastiche, but a sweet, gentle show with an almost pathologically sincere love for its characters. While this may come at the cost of some of The Orville‘s personality (season 2 has been playing it safe with tone, if not with heady sci-fi concepts), the show feels fully formed now, sure of itself and with a deeper understanding of what it wants to give its audience. Sometimes, you don’t need pew-pew lasers or cutaway gags: just a tearful reconciliation drenched in rainfall, on the bridge of a starship. “We are, without a doubt, the weirdest ship in the fleet,” Gordon (Scott Grimes) says. He might be right. 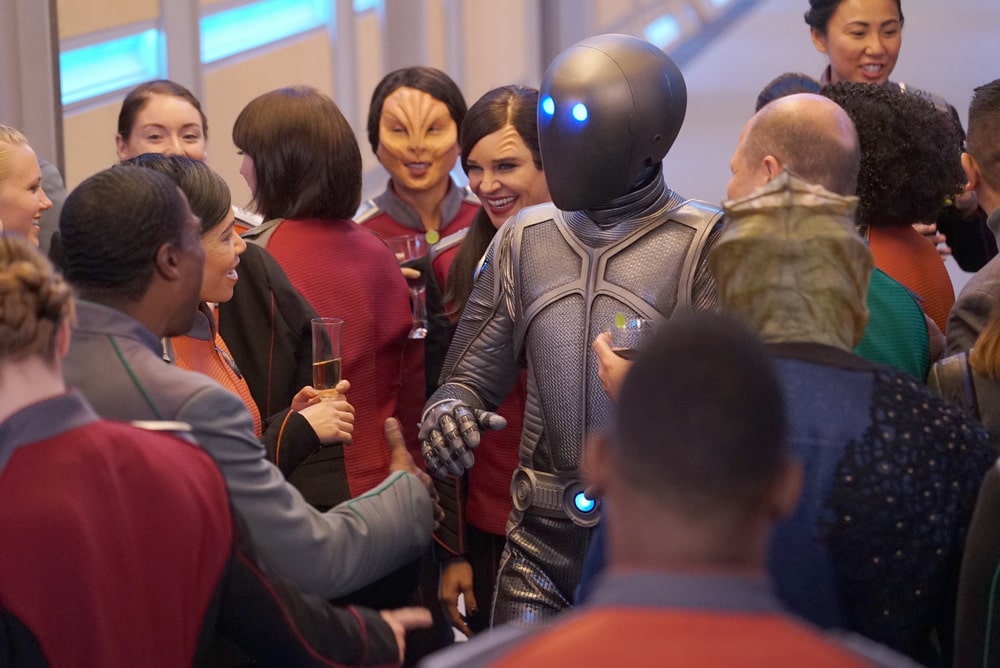 The Orville gets Serious this week, with the first part of a two-parter that intriguingly complicates one of the show's most mercurial characters. 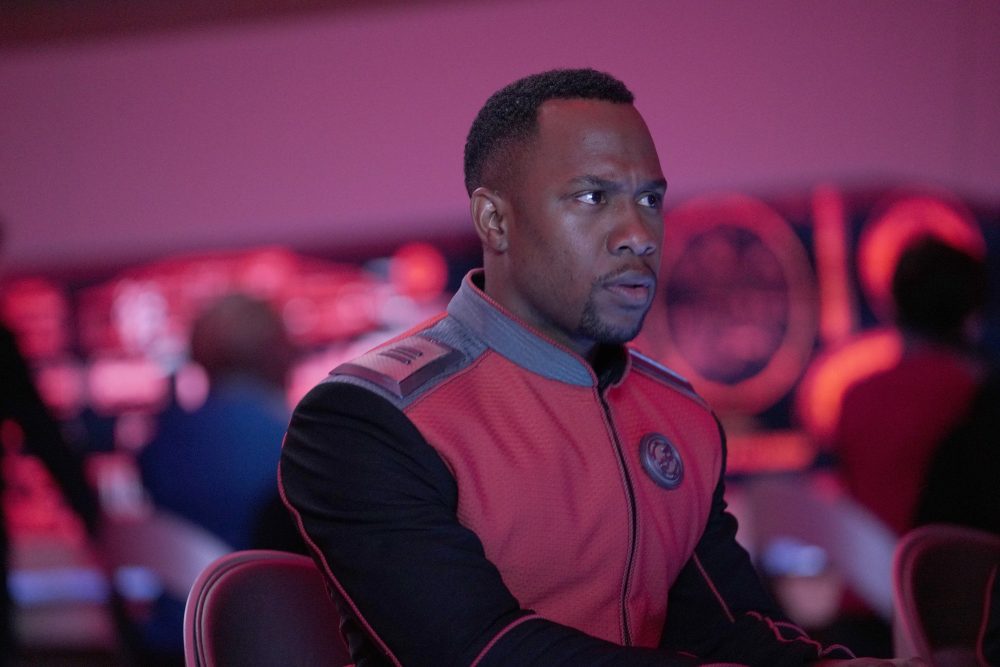 The Orville tries its hand at big-time space spectacle in a more action-heavy hour, with the entire Union at stake. 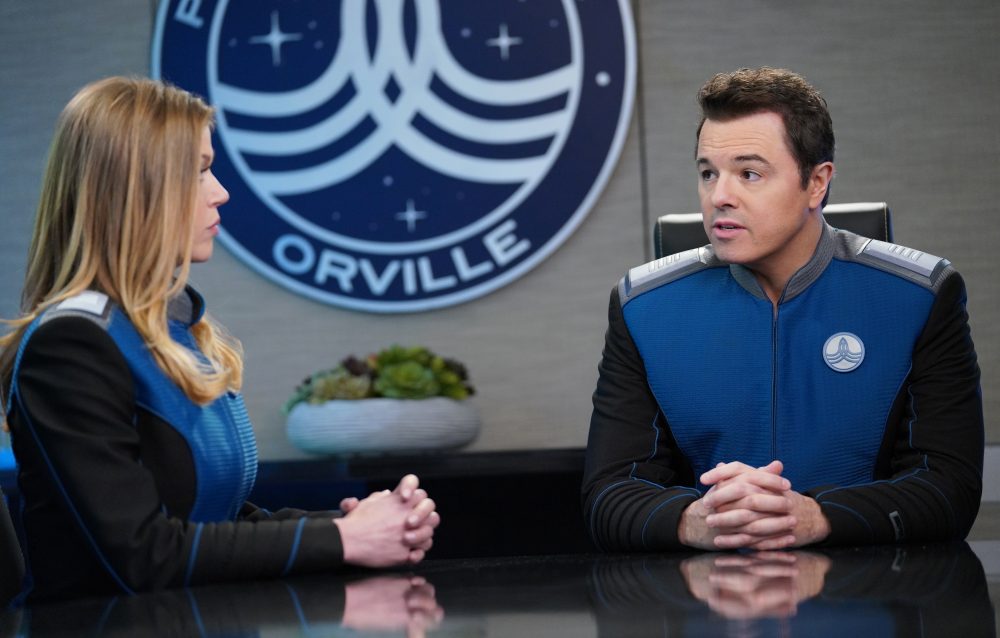