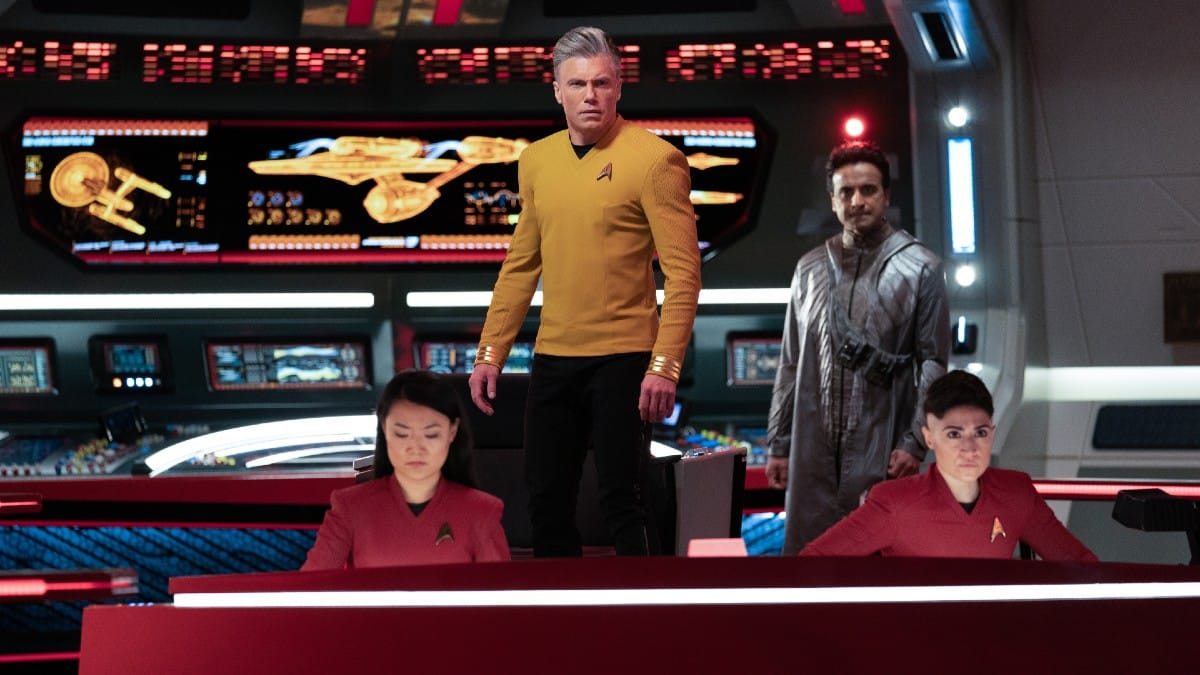 Strange New Worlds continues to spin the roulette wheel of classic Star Trek tropes. The pretty smile with an ulterior motive. The idyllic community with a dark secret. The devious foes who turn out to be an offshoot of the good guys’ society. This new series deploys these concepts with aplomb, but like so much in this inaugural season, they are certainly familiar to longtime fans.

The fun begins when the Enterprise helps rescue a shuttle under attack in the Majalah system and Captain Pike (Anson Mount) is drawn into a local conflict and reunited with an old flame. Her name is Alora (Lindy Booth), and she’s the Malajan Minister, tasked with ferrying along her people’s chosen one, a child dubbed the First Servant (Ian Ho), as he waits his “Day of Ascension.”

The Majalans are a very private people, declining to join the Federation and trying to handle threats on the First Servant’s life internally. But that doesn’t stop Pike and Alora from making goo-goo eyes at one another. Nor does it prevent the child’s father, Elder Gamal (Huse Madhavji) from curtly availing himself of the ship’s sick bay. It’s all a sound setup, albeit nothing especially novel for Star Trek.

Yet, it’s the late-breaking twist in the narrative (another trope deployed by the original series and its successors) that distinguishes “Lift Us Where Suffering Cannot Reach”. The story takes its time to reach the punchline, and not every scene and set piece the show offers in the meantime is worthwhile. But by the end, the season’s sixth episode leaves the audience with plenty to reflect on and mull over, which is what fans should demand from Star Trek in all its forms.

Before that though, you need mystery, romance, hope, fancy tech, and, of course, senior officers giving their subordinates the business! That last part is the most undercooked of the episode, but still enjoyable.

Cadet Uhura (Celia Rose Gooding) is on her security rotation and must survive the infamous training routine of Lt. Noonien-Singh (Christina Chong). There’s a steady enough mini-arc at play: from Uhura struggling with her superior’s demanding rules, over-performing on difficult tasks, earning the right to present her findings to the captain, and ultimately gaining La’an’s approval when she demonstrates how she’s taken her mentor’s lessons to heart. But the connective tissue between these beats isn’t particularly strong, and the story thread serves more of a mechanical purpose to the plot than something that firmly speaks to either character.

The other subplot focuses on Dr. M’Benga (Babs Olusanmokun) and his hidden daughter, Rukiya (Sage Arrindell). “Lift Us” picks up from the glancing introduction to M’Benga’s sympathetic secret in the show’s third episode. Rukiya drops hints to her father about feeling trapped by having to stay in the transporter’s pattern buffer to prevent her illness from advancing. Dr. M’Benga himself puts up a good front but is clearly pained at only having these intermittent-at-best moments with his child. Their scenes together sell the hardship of the arrangement in a way “Ghosts of Illyria”, an episode already filled to the brim with story, really couldn’t.

But “Lift Us” raises the subplot anew because the Majalans have remarkable medical technology. Seeing Elder Gamal heal maladies using quantum mechanics and other science-as-magic, M’Benga is naturally inspired to wonder whether these techniques could halt his daughter’s illness. The closed-rank Majalans don’t share their technology with outsiders, but in the end, Gamal relents, providing his counterpart with the first steps toward a cure, as the two men commiserate over trying to protect their children.

There’s merit to that personal shift in beliefs and the mercy that results. But the episode doesn’t really show Dr. M’Benga so much as arguing strenuously for the need here, given the secrecy of his situation. Nor does it depict him privately wrestling with the prospect or bouncing it off a confidante like Number One (Rebecca Romijn). Worse still, given Gamal’s role in the A-story, the episode plays his true motives close to the vest until the end, so there’s not much of a “before and after” with him either.

The love of a parent for their child doesn’t need much development to be believable. Commiseration and camaraderie between fathers trying to save their children is an easy thing to sell. But despite the clear stakes and opportunity for salvation the Majalan technology provides, this subplot also feels underbaked and incomplete.

But the main plot is solid, even if it spends too much time spinning its wheels before diving into the thrust of the story. Despite needing to bend a few Majalan norms in the process, Pike tries to help Alora and her people protect the First Servant and uncover who’s trying to kidnap him. That mystery fuels the episode well enough and provides an excuse for Alora and Pike to flirt, swoon, and make good on the romantic feelings they didn’t explore the last time they crossed paths.

The trajectory here is no surprise. The two lovebirds get the vapors the moment they reunite. And any Trekkie worth their salt vampire will suspect that the old flame who suddenly returns probably won’t be sticking around, particularly when they hail from a closed-off community rife with cryptic hints that something’s amiss. But Mount and Booth have fun chemistry together, and SNW harnesses Pike’s knowledge of his own grim fate to add meaning when Alora invites him to stay with her permanently on Majalah. Her offer represents the possibility of averting his bleak destiny or at least making the most of the limited time he has.

The problem’s that the nuts and bolts of the mystery Pike tries to unravel are less than outstanding. The action sequences are choppy and border on nonsensical in places. Standard clichés suggest the Majalans aren’t so noble and their enemies aren’t so dastardly long before the episode acknowledges it. And the “why” behind the attempts to steal the First Servant and what he means to the Majalan people take too long to unveil.

But once they do, it’s a doozy. It turns out that Majalans power their whole society, an idyllic paradise floating above a lake of fire, using the neural network of a child’s mind. The precocious kid designated as the First Servant — who bonds with Mr. Spock (Ethan Peck) and M’Benga’s daughter while aboard the Enterprise — is expected to give his life to preserve his people. The mantra of the Majalans — “Science, Service, Sacrifice” — takes on a chilling new meaning when that last word comes into focus via a sinister light. And the resistance leaders pursuing the child come from what turns out to be a hardscrabble nearby colony of former Majalans with moral objections. They are, in fact, trying to save the child, with the help of Gamal, rather than let him be used as fuel for an opulent society’s splendor.

The mechanics of it all are a little silly. It requires one of those standard, TOS-style “We use a machine our founders constructed long ago to support this implausible setup that’s mainly allegorical” explanations. But the impact of the reveal abides. Even if the ultimate twist is predictable, even if the truth turns Pike’s stomach, the speech Alora offers in response to his revulsion outlines the piercing metaphor at the center of this story.

She challenges Pike. The Majalan minister admits that their methods may seem harsh to outsiders. To the same end, the audience can and should reasonably question whether a minor, even a precocious one, can willingly consent to such a sacrifice, regardless of what may be gained from it. “Lift Us” practically invites viewers to recoil at the barbarism dressed in ritual and spiritual celebration that powers the Majalan way of life.

But Alora makes a fair point to her shocked beau — can he fairly say that no children suffer for the Federation’s blessings? Maybe he could, depending on how closely Star Trek is hewing to Gene Roddenberry’s doctrinaire view of utopia this week. Nevertheless, we can’t, and that’s the point.

It’s easy to look on in horror as a ten-year-old child is fed into a machine that keeps his civilization thriving. But it’s harder to acknowledge the young boys and girls no older than the First Servant, working in sweatshops to sew our clothes and build our electronics. It’s tougher to reckon with the kids in cages punished for wanting to avail themselves of American security and opportunity. It’s more painful to face the fact that some children get to grow up watching Star Trek and dreaming of a wondrous future while others die of preventable diseases.

It takes too long for “Lift Us” to get there, but that final speech is a gut punch and elevates the episode. Alora’s point resonates. What her people do seems wrong, savage, and horrifying. But what our society does to maintain its standard of living is no better, only more indirect. The Majalans bear witness to their sacrifice and honor the service and memory of the child who provides for their largesse. Our comfort and luxury are born on the backs of young people whose suffering is no less. And yet, too many of us, your humble critic sadly included, do little more than look away. 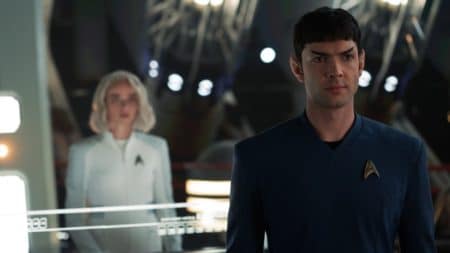 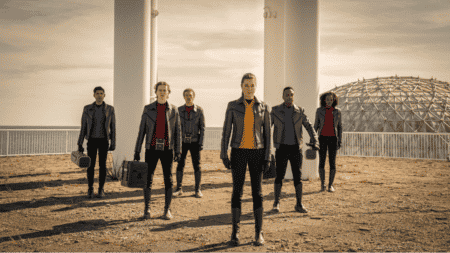