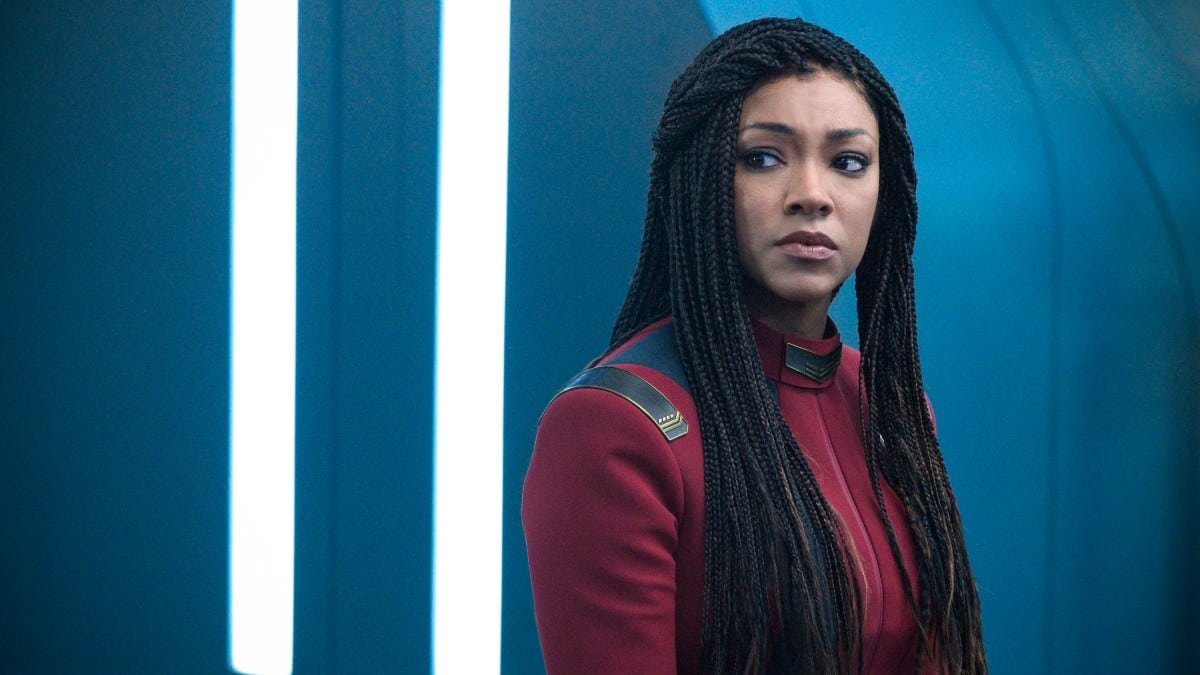 The Discovery crew eke out a long-overdue win, but the show takes too many narrative and emotional shortcuts to get there.

Earn it. Our favorite characters deserve to enjoy a few wins now and then. And it can be moving to watch sympathetic folks achieve their breakthroughs. But those events only have meaning if you do the work to draw a line between struggle and victory. Otherwise, however nice it may seem in the moment, any successes will ultimately feel hollow when they come by fiat rather than by trial and tribulation.

That’s why I’m a little down on “Choose to Live”. There’s plenty to like here. Burnham (Sonequa Martin-Green) goes on an adventure with her mom! Tilly (Mary Wiseman) tries to take chances and break out of her rut! Book (David Ajala) grapples with his survivor’s guilt with some Vulcan assistance! Gray (Ian Alexander) gets his new body! These are all good stories and worthwhile story beats. But Discovery takes too many shortcuts to get there, and it dampens moments that might otherwise be purely beautiful and triumphant.

It all starts with a heist gone wrong. A member of the Qowat Milat, the group of truth-spouting Romulan ninja nuns introduced in Star Trek: Picard, interrupts a Starfleet dilithium delivery and kills a commander in the process. It leads to a diplomatic kerfuffle between the Federation and Ni’Var. As a result, President Rillak (Chelah Horsdal) pairs Michael with none other than her mother, Gabrielle (Sonja Sohn), a luminary of this lost cause-loving order, as a political compromise. The catch is that the fugitive Romulan nun is the same one who nursed Gabrielle back to stability after she arrived in the future.

It’s a good setup! Michael is hell-bent on bringing this outlaw who murdered one of her colleagues to justice. Gabrielle, on the other hand, acknowledges how it looks but trusts the person who showed her such compassion and believes there’s more to the story. Their mission is freighted with the delicate political situation between the Federation and Ni’Var and, of course, the complicated mother-daughter relationship between Michael and Gabrielle. There’s plenty of room for compelling conflict and meaningful resolution to be had here. And the same goes for Tilly, who joins the mission (at Saru’s suggestion) in a bid to get outside her comfort zone, providing an entertaining fish-out-of-water routine.

The problem comes when things start to go sideways. The fugitive and her mercenaries interrupt the Burnhams’ efforts to track her down and start swinging their erstwhile samurai swords like a pack of middle schoolers with yardsticks. Despite the fact that Michael and Tilly lack phasers (at Gabrielle’s request), not to mention dialogue emphasizing Tilly’s lack of skill in combat, the duo come out almost entirely unscathed, while one of Gabrielle’s fellow ninja nuns bites the dust.

Why establish Michael as fighting at a deficit thanks to her mother’s restrictions, and Tilly’s ineptitude in a fight, if they’re both going to be resourceful badasses anyway? In isolation, unrealistic survival odds for main characters is standard operating procedure for Star Trek. But it’s part and parcel with “Choose to Live”’s unfortunate habit of setting up interesting obstacles only to have our heroes breeze right through them.

The same goes for Book’s experiences on Ni’Var. He ventures down to the planet with Stamets (Anthony Rapp) out of a desire to do something rather than stew in his grief, in the hopes of learning more about what caused Kwejian’s demise. While the Vulcan scientists are meditating, President T’Rina (Tara Rosling) offers Book her condolences along with some advice on how to contend with his pain. There too, the setup is intriguing. A Vulcan offering guidance on emotional struggles is a novelty, and their conversation about the tools and techniques to move forward is a strong, albeit florid one.

But then we dive into a mind-meld between Book and T’Rina, ostensibly to help prove Stamets’ theory on the Dark Matter Anomaly™, but narratively, it’s an excuse to give Book an easy means of recovering from his guilt about his nephew. The catch is that mind melds are a big deal! Especially for non-Vulcans. They can be dangerous. One practically wrecked Captain Picard. Another messed up Tuvok. It’s a significant move for the show to introduce with little wind-up and zero negative effects.

It’s part and parcel with “Choose to Live”’s unfortunate habit of setting up interesting obstacles only to have our heroes breeze right through them.

You can offer plenty of handwaves for that, but the problem isn’t the continuity or practicality of it. It’s the fact that Book’s grand emotional problem here is basically solved by magic. There’s no struggle or difficult soul-searching to reach his breakthrough. He’s simply able to heal by a chance interaction with someone who effectively gives him a memory potion. The episode doesn’t earn the emotional payoff.

The opposite approach is why the subplot focused on Gray’s transfer to his new body is the most successful in “Choose to Live”. In some ways, it too buckles under the episode’s propensity to choose easy solutions and technological wizardry over hard-won victories. Last season, Dr. Culber (Wilson Cruz) promised Gray that he’d make him truly seen, and boom, here we are! No fuss, no muss!

I’m not the critic to unravel the validity of Gray’s story from a trans lens, or dissect the episode’s balance of hugboxing vs. scab-picking. (I’d recommend our own Taylor Beck, who’s deftly unpacked these issues in The Handmaid’s Tale, or Emily VanDerWerff, who’s written eloquently about both Star Trek and trans readings of pop culture.) You could be forgiven, though, for feeling like this narrative falls into the same pitfalls as the others here.

The cinch, though, is Adira (Blu del Barrio). They hear the warning from Guardian Xi (Andreas Apergis) that this technique has never been attempted before. When and if the consciousness transfer will proceed remains something of a mystery. Gray accepts the risks, but Adira has to sit there and worry while they wait to see whether the procedure will take.

The choice to lean into those anxieties makes all the difference. We see Adira looking with distress at Gray’s lifeless new body, wondering if he’ll ever wake up. Despite Hugh’s reassurances, we see Adira labor under self-doubt and question if it’ll be their fault if things go wrong. In short, we see the prospect that this grand effort might fall short and, more importantly, a loved one fretting and self-blaming in the shadow of that possibility.

So when Gray does wake up, when he embraces Dr. Culber, when he promises to do the same with Guardian Xi, when he thanks Adira for guiding him home with their voice and devotion, it has weight and meaning. Beyond the heartening metaphor at play, beyond the theoretically bigger stakes of the other two stories in “Choose to Live”, Gray’s reincorporation and Adira’s joy and relief when it works has the biggest impact of anything in the episode, thanks to the hardships in force when the characters wrestle with what real failure might mean. The shortcuts don’t matter when the emotional trajectory makes sense.

And in fairness to Book’s subplot, the emotion of his revelation lands too. However convenient the means, his mind-meld allows him to remember his nephew hearing his final benediction and recall that their last moment together was one of affection and understanding. It helps Book to push past a measure of his grief.

It’s a lovely sentiment. It can be devastating to lose someone and worry that they never knew how you felt. The chance to express such sentiments is a gift. And there’s emotional and psychological truth in Book feeling comforted by this newfound knowledge. His pain and catharsis here are grounded in genuine, relatable loss. That’s why it’s a shame this big step stems from such a narrative convenience.

The contrivance and glide path to success here diminishes the stakes.

The same goes for the adventures of Tilly and the Burhams. (Band name’s already registered, sorry.) They find the fugitive’s hideout, which turns out to be a strange alien mausoleum, and lure their target back to the ominous (if visually dodgy) setting. In the ensuing confrontation, it turns out that Gabrielle’s right and her Qowat Milat counterpart does have a sound reason for her actions.

It turns out her “lost cause” is these non-humanoid aliens, who are traveling in cryostasis and looking for a new home. However, many of their hibernating bodies were looted by grave-robbers since they contain latinum. The fugitive nun heard their psychic cries and needed the dilithium to protect them, resorting to theft since Starfleet only distributes it to governments, not individuals. The nuts and bolts of her plan add up, with good reasons along the way for Gabrielle to have faith in her friend and for Michael to question this killer.

But everything falls into place too simply. Michael’s able to piece together the whole alien cryostasis scenario based on very little. She and the rest of the team are able to piece together the nun’s story with minimal guidance from the woman herself. And despite the tech from an unknown species at play, Burnham’s able to divine not only that the aliens are ready to come out of hibernation, but figure out how to kickstart it, thereby ending the Qowat Milat member’s quest.

Once more, the contrivance and glide path to success here diminishes the stakes of it all. I don’t care about the plausibility or lack thereof. Star Trek has glossed over more in service of less. I mind the ease with which all of this comes to our heroes because it diminishes the impact of their success.

An easy victory is a hollow one. It makes the threats feel less real and the problems seem trivial, at the same time the episode’s telling you they’re a big deal. It weakens the choices Michael and Gabrielle have to make over whose instincts to trust when their motivations are in direct conflict. An effortless resolution makes their tough decisions feel hollow, even as the ensuing realpolitik of President Rillak, who remands the fugitive to Ni’Var in the name of diplomacy, rankles Michael and feeds into the bigger throughlines of the season.

The journey there simply isn’t as strong. The three stories of “Choose to Live” are united by the same bigger theme. As Gabrielle tells Tilly, the titular Qowat Milat saying is not a threat, but rather a maxim, founded on the notion of choosing new paths when the old ones are exhausted. Gabrielle chooses to spare her friend. Michael chooses to revive a civilization. Book chooses to go on living with the sweetness of the memory of his nephew. Gray chooses to live as the real him, knowing the risks involved in becoming his true self. There’s heart and character in each decision.

But those paths have to come with bumps along the road, tough steps to reach their destinations, or the impact of it dwindles. Earning those joyful moments, those breakthroughs, those personal triumphs, is hard for characters and writers of all stripes. And yet, they’re what elevate the best of Star Trek, and the best of all stories, into something truly special.