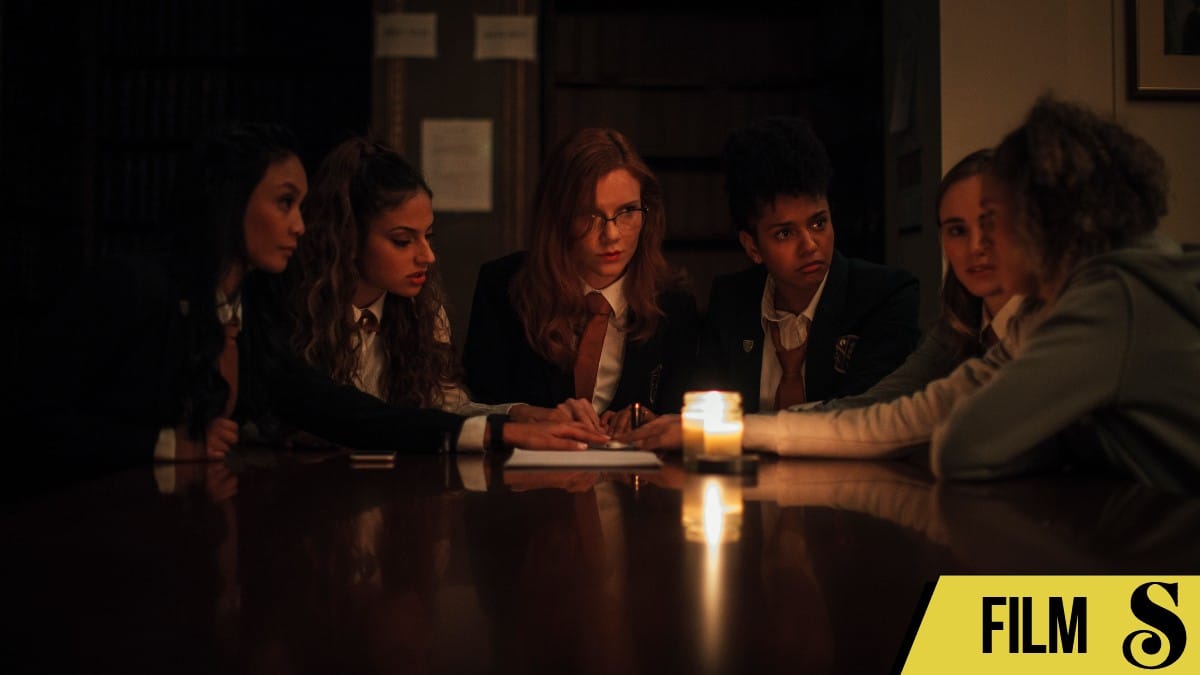 Seance is counting on one thing to keep the scares coming. Times may change, trends may come and go, but any organization that prides itself on its elitism, and thus its insularity, never will.

Make no mistake, there are also some damn good performances, technical choices, and just enough ambiguity to keep audiences in a state of suspense, if not outright fear. And yet, it’s this core truth that powers Seance through its 92-minute runtime, and thank goodness it doesn’t try to overextend its reach.

If it pretended to be anything other than what it is, which is a finely tuned cult horror film, then much of the charm of Simon Barrett’s feature directorial debut would be lost. Barrett has slowly but surely built up a resume in the horror genre, mostly as a writer (he penned both You’re Next and The Guest for Godzilla vs. Kong‘s Adam Wingard), while quietly beefing up his director bonafides in the usual way: by helming a series of shorts. His debut is both a tribute and a throwback to the old school horror offerings he clearly loves, which brought the slasher thrills while sprinkling in just enough clues for a bit of murder mystery.

Things start in a fashion that’s familiar enough, with a traditional slumber party-type ritual at a remote all-girl boarding school. It’s simple yet classic, needing nothing more than a dark room and a mirror in which to say a ghostly name, but which nonetheless proves to be the catalyst for a series of bloody deaths that leaves everyone involved wondering if they might’ve summoned up an actual demonic force.

In such a genre setting, it’s always a bad time to move into a home or be the new kid at school, and sure enough, steely new arrival Camille (Suki Waterhouse, Detective Pikachu) quickly finds trouble at the Edelvine Academy for Girls, clashes with the ruling clique of mean girls, with one of her few consolations being the bond she forms with a sympathetic classmate Helina (Ella-Rae Smith). As they both find themselves in the same boat as their tormentors by sheer happenstance, the real question is whether the menace they’re confronting is a supernatural force, or just as frightening, something wholly human.

That question is what subverts the usual horror movie tropes that would usually earn a few laughs. If no one’s sure what kind of story they’re actually in, running away from your so-called friends and locking yourself in your room looks like the sensible choice, as does heading off alone to meet a friend who texts you in the middle of the night (well kinda) if you’re unaware they’re already dead.

Even our protagonist Camille can’t be fully trusted, although she and Helina are the few potential victims who actually earn our sympathy. It’s not too hard to be concerned for Camille, since she shows up right after the first victim has been done away with and is actually staying in her now vacated room. Especially when said room comes with lights that flicker at just the right moments and creaky floorboards, upping the creep factor ever further. But even if she has an airtight alibi for every misdeed, her presence is a mystery in itself, since she clearly has more baggage than the possessions she brought with her. Like actual weapons, a willingness to throw a literal punch at anyone who crosses her, and a determination to find who or what is behind everything that all but screams unrevealed backstory.

The rest of the victim pool may also consist of teenage girls (even if most of them look suspiciously like 20 and 30-somethings), but don’t expect camaraderie and mutual support in a nod to our current mood. Most of them fit right in with their cold, rigid institution, and they revel in the fear they inspire among their peers. However, their ends do not wallow in the misguided sense of sadistic self-righteousness so many slashers suffer from. Death comes precisely and calculatingly here, with little interest in the thrill of a chase that would risk a target escaping.

When all is inevitably revealed and the blood has stopped flowing, there’s little sense of triumph, only the knowledge that this is the kind of mostly believable tragedy that would be spat out every now and then by an institution that sees its students as a series of cogs which exist merely to prove its own greatness. This particular one just had a more literal body count.

Seance opens in theaters and arrives on demand and digital on May 21st.