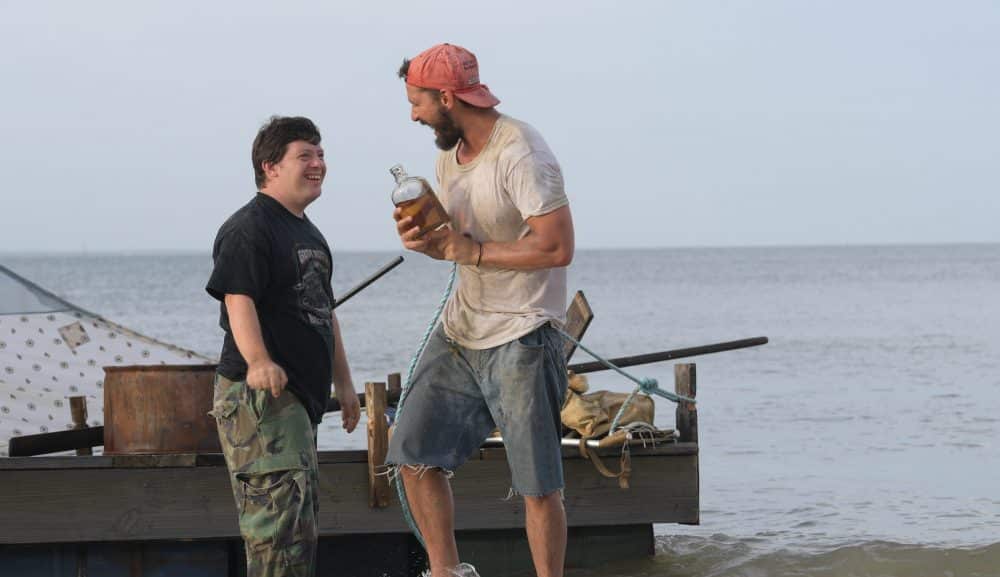 It’s a little Sundance-y, but Tyler Wilson and Michael Schwarz craft a smart, balanced indie that avoids the usual pitfalls of the way movies tend to treat disability.

Let’s get this out of the way. Even with context – and there is plenty – The Peanut Butter Falcon is a hurdle of a name. But while Tyler Nilson and Michael Schwartz’s dramedy flirts with the anonymous Sundance Labs-approved tropes that the name may bring to mind, it’s worth a look as one of the more engaging examinations of Hollywood’s queasy relationship with Down Syndrome. “Authenticity” is a dangerous word in criticism, evoking either images of poverty porn or worse, a clouded perception of what can be deemed as the real, but the film does some serious legwork in making its rural southeast Americana and colorful characters more than a mere backdrop for hijinks and empty representation.

Thick with humidity, sweat, and some other bodily function, this is a coming-of-age story that foregrounds its main character’s genetic disorder without feeling like a vanity project or inspirational hokum in the way that so many films about characters with Down Syndrome often do. That doesn’t mean that there isn’t occasionally the dissonance of a movie star talking down to the star (An earnest but crucially un-self-conscious Zack Gottsagen), but the film is smart enough to bake that condescension into the character – making it an interesting dialectic about the balance of how to treat someone who has a history of being mistreated on screen.

Beginning with just an inkling of Wes Anderson’s debut Bottle Rocket, as Zak (Gottsagen) attempts to escape a nursing home in Richmond, it’s thankfully a diversion as a much messier film in shape and attitude takes its place. If Zak had his way, he’d be training with his idol, Salt Water Redneck (Thomas Haden Church), a washed-up wrestler who possibly runs a wrestling school in Aiden, NC, and who Zak watches on a loop on an old videotape. He’s all the while under the watchful eye of Eleanor (Dakota Johnson), who continually thwarts his plans to escape for fear that he’ll be unable to survive in the outside world.

The film does some serious legwork in making its rural southeast Americana and colorful characters more than a mere backdrop for hijinks and empty representation.

Zak’s journey soon intersects with Tyler (Shia LaBeouf) as they become bush-league outlaws. Tyler, sporting some familiar dirtbag chic that proudly reflects the blood, sweat, and tears of his past is initially familiar – a man with potential derailed by personal trauma – but as played by LaBeouf, his arc is a pleasant scribble rather than a slope and he diverts the film whenever the script starts to feel too emphatic with its themes.

Whether he’s channeling his inner Thoreau screaming into the wind with a jug of whiskey or playing up his devilish sexuality, he’s one of the few actors in the film who never feels like he’s working through an acting exercise with Gottsagen even as his performance style has become so exhibitionist.

As the film begins, Tyler’s in hot water for snatching up Duncan’s (John Hawkes) crab traps along the swamp, and in a fit of rage, lights all Duncan’s remaining empty traps at the docks on fire. On the run with Zak, he doesn’t immediately take a liking to Zak’s constant questions. But the script thankfully doesn’t force their friendship, letting it emerge rather than appear. That doesn’t mean that it isn’t prone to capital-p problematic detours like a run-in with a blind person of color who dispenses wisdom and insists on baptizing them but those moments are few and far between.

Along the way, the sense of location – marshlands, sticky thoroughfares – is filled with grit even as the constant soundtrack of bayou struts, Alan Lomax-esque folk, and ebullient gospel numbers threaten to undo the natural sense of atmosphere.

Crosscutting between Zak and Tyler, Eleanor, and Duncan, there’s a distinct feel to each of these characters and how they interact with others. There’s a gentle kindness to Eleanor as she tries in vain to suss out Zak’s irregular plan. The scenes with Duncan likewise seethe with a quiet menace even before his tattooed crony is threatening a child.

This, understandably, isn’t a wildly unpredictable film, but it’s fair to say that the film thankfully doesn’t pull its emotional punches with one flagrant exception. And the chemistry between all the characters is so strong that it rarely feels like it’s overstaying its welcome.

Even being a veteran to the south, Eleanor is hopelessly cosmopolitan compared to Zak and Tyler whose friendship and mutual loneliness breeds a more off-the-map approach to life. This is the closest thing to a masterstroke – far from so many other films of this type, Peanut Butter Falcon doesn’t condescend to Zak’s character with good intentions or handle him like a child.

If anything, Eleanor’s character is a model of this kind of academic empathy. She cares deeply about him, but won’t let him live his life lest he have a difficult time or end up in Cherry Hill – the dreaded place where they send drug addicts and prostitutes (a line that’s fascinating in the context of showing the limits of Eleanor’s empathy).

Zak has his own weaknesses he needs to contend with – an inability to swim, people underestimating him – and those difficulties are baked into the film without eliminating his being in the process. There’s no shying away from conversations about how Zak has been called “retarded” and bullied by others who are unwilling to have patience with him when he doesn’t understand something. That’s ingrained right into every aspect of the film and even as it can lead to some unfortunately simplified dichotomies – sheep/wolves; good guys/bad guys – it feels so much more real for that reason. Representation for people with genetic disorders still has a long way to go, but this is the rare film that seems to be moving the needle instead of placating the masses.

The Peanut Butter Falcon is currently available in limited release.