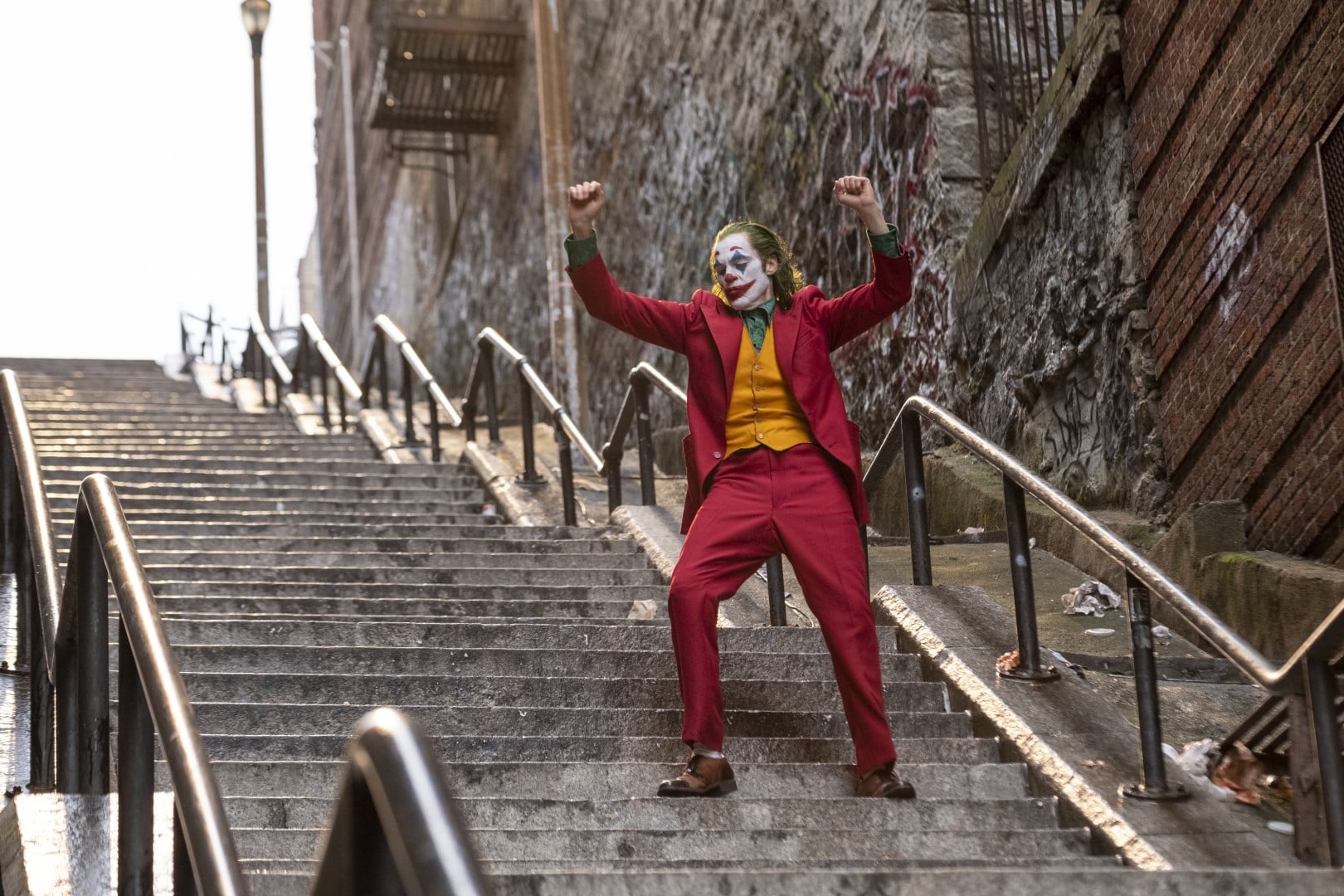 Todd Phillips’ seedy, 3edgy5me imagining of the Clown Prince of Crime is as artfully made as it is disturbingly retrograde.

“I’m not political,” claims Arthur Fleck (Joaquin Phoenix), finally decked out in the pancake makeup and burgundy suit that has adorned Joker‘s marketing for the last few months. “I just want to make people laugh.” But we know that’s bullshit; despite his protestations, Arthur is an intensely political figure, and Joker is an intensely political movie. But as much as director/producer/co-writer Todd Phillips wants to shake off the shackles of the Hangover trilogy and pivot from comedy to serious fare (or, as this ill-timed Variety interview reveals, abandon the former because ‘woke culture’ is ruining comedy or whatever), Joker‘s existential gag falls flat on its face.

But let’s do our best to shake off The Discourse and meet the movie where it’s at, where its intentions lie — an alternate universe take on the Clown Prince of Crime, set in Gotham City in the late ’70s amid civil unrest and a garbage strike that leaves the city even grimier than you’d expect. Right away, the oft-mentioned Scorsese homages ring true: DP Lawrence Sher soaks Gotham in muted blues, grays, and browns, littering the streets with newspaper and gunk and steam, cribbing lovingly (if often pointlessly) from Taxi Driver. Hildur Guðnadóttir‘s droning score hovers over you like a heavy blanket, sonically laying brick after brick on Arthur’s back as he climbs up the steep stairs to his apartment like Sisyphus. The only people seemingly thriving in this version of Gotham are the rich, who live sequestered away in their mansions and sneering down at the poor when they complain. (Don’t expect this film’s version of Thomas Wayne (Brett Cullen) to be the benevolent capitalist of most other Batman stories.)

Struggling to get by in the chaos is Phoenix’s Arthur, a mentally-disturbed man sinking in poverty with his ailing mother (Frances Conroy) and struggling to make it as a stand-up comedian. A brain condition leaves him with an uncontrollable laughing tic, his social worker doesn’t listen to him, and things just don’t seem to be getting better for poor Arthur. A single mother in his building (Zazie Beetz) might give him the salvation he needs, but we know that’s as illusory as everything else in his life. In The Killing Joke, Alan Moore’s take on the Joker notes that “All it takes is one bad day to reduce the sanest man alive to lunacy.” Compare that to Arthur’s claim that “I haven’t been happy one second of my fucking life.”

To his credit, Phoenix gives the kind of superlative performance we expect of him at this point — painfully gaunt, clothing hanging off his bones like a coat rack, Phoenix gifts Arthur with a dancer’s physicality, channeling Travis Bickle and Charlie Chaplin in equal measure. (These observations would be more daring if Phillips et al. didn’t wallpaper the film with their obvious influences — casting Robert De Niro as a late-night host in a King of Comedy homage and setting one scene at a theater screening of Modern Times — but what can you do?) Phoenix leans into the anarchic madness of Arthur at every turn, and it’s an affecting, disturbing lead turn, zagging into every lurch of the film’s tone with remarkable grace. His Arthur Fleck is a great baseline, hopefully, for viewers to dive into his other brushes with madness; hell, look no further than last year’s You Were Never Really Here for a stronger take on the violent-madman-with-mommy-issues territory trod here.

It’s tempting to scoff at all the pearl-clutching about the effect of movies on violence, or online far-right spaces idolizing media figures like the Joker as perfect avatars for their own dissatisfaction with society. But honestly, no matter how far Phillips tries to distance himself from it, or has Arthur say he’s ‘not political,’ Joker leans pretty hard into, if not idolizing the Joker, then at least humanizing him and his behavior. Yes, Arthur murders and causes all manner of mayhem that can’t possibly be excused. But Phillips’ film celebrates that transgressiveness, sinking you into Arthur’s perspective in a way that chills the bones. (In my press screening, some of Arthur’s most horrific deeds were followed by the occasional clap of glee from a few audience members who read those moments as ‘badass’. You telling me I’m not supposed to be worried about that guy?)

It’s also impossible to divorce the movie’s takes on class warfare and disenfranchisement from our current political moment. Some of Arthur’s earliest misdeeds inadvertently spark a clown-filled class revolution with nods to Occupy; Thomas Wayne’s dismissal of them as ‘clowns,’ only for them to own the term and protest in clown makeup, is not unlike the right’s appropriation of the word ‘deplorable.’ Yet these mobs are painted as violent and rage-filled, angry white men who will burn down your house and kill your family if you don’t give in to their demands. Joker‘s certainly attempting to thread the political needle by criticizing capitalism for its stratification of wealth while deploring activism and protest as violent, angry swarms, but it just comes across as confused.

Phillips’ film celebrates that transgressiveness, sinking you into Arthur’s perspective in a way that chills the bones.

Add to that the inevitable racial subtext, in which Arthur’s problems as a downtrodden white man are explicitly likened to that of his social worker (Sharon Washington), a black woman who reassures him that they’re going through the same problems. Problem is, Arthur can take off his makeup or his clown mask and reassimilate into polite society whenever he wants, cackling jags aside; she can’t, and the effects are probably even worse for her. There’s a world of difference between his problems and hers’, and the same goes for Beetz’s struggling single mom or Brian Tyree Henry‘s cautious Arkham clerk. It feels disingenuous to liken them so cleanly, especially since Joker feels so much like a movie about whiteness and its inability to cope with mediocrity. Arthur’s not a great son, or a competent clown, or even a good standup comedian. But the characters in the movie take excruciating pains to remind him of that, and it’s implied that these pressures are what push him to violence.

In a way, it’s Joker‘s tenuous connections to the DC universe that serve as some of the film’s biggest liabilities. Sure, it’s in Gotham City, and Thomas Wayne’s mayoral campaign looms over the texture of the film; we even get glimpses of Alfred Pennyworth (Douglas Hodge) and Baby Bruce Wayne (Dante Pereira-Olson) and Arkham Asylum. But as the film barrels towards its inevitable conclusion – of course Arthur is going to turn into the Joker at some point – there’s a frustrating level of box-ticking that further sours the rancid social commentary at its heart.

Writing a review for Joker two days before release almost feels like a moot point — the Discourse has already had its way with it, alternatingly hailing it as a subversive masterpiece and deriding it as incel fodder depending on where you sit on the political spectrum. And Joker is a political movie, no mistake, filled with contradictions and anchored by an intense, unsettling lead performance.

But those politics are muddled (seriously, the ‘we live in a society’ memes are practically echoed in Arthur’s most pivotal line of dialogue in the climax), and its fence-sitting about whether Arthur should be condemned or rehabilitated belies the glee by which it revels in his behavior. Even if we ignore the immaturity and shallowness of its messaging, there’s a lot of mess in Joker that not even watching Phoenix do his thing for two hours can fully shake.

Add to that the emptiness of its stylistic homages, and it’s hard to find much sting in Joker‘s ultimate punchline. Unless, of course, you feel a bit like Arthur himself. In which case, please seek help.

Joker sends in the clowns (to a society, man!) on October 4.