This sequel to the 2013 animated hit delivers on the songs and some lovely messaging, but essentially delivers more of the same.

“Some things never change,” sings the ensemble cast of Frozen II early in its runtime, a rousing, chipper ballad from Kristen Anderson-Lopez and Robert Lopez cheekily teasing that change is, in fact, in the air for the citizens of Arendelle. Unlike the snowy jewel tones of the first Frozen, that 2013 hit that grossed more than a billion dollars and cemented “Let It Go” as a perennial you-go-girl earworm, Frozen II is coated in the browns and ambers of autumn, that season of transition. Much as it drapes itself in the costume of change, Frozen II knows all too well to stick to what works; it’s a Disney film, after all, a studio allergic to risk. As a sequel, it’s charming enough and extremely sweet and well-intentioned. It just can’t quite hit the exuberant highs of its predecessor.

Years after Elsa’s (Idina Menzel) acceptance of her ice powers and ascension to the throne of Arendelle, she rules wisely and well with supportive sister Anna (Kristen Bell) at her side. But she’s grown discontented, and a strange wind calling to her from the north. It isn’t long before a strange force suddenly threatens Arendelle, forcing Elsa and Anna, along with Anna’s beau Kristof (Jonathan Groff) and perma-frosted snowman sidekick Olaf (Josh Gad), to journey to a mysterious, abandoned, fog-shrouded forest beset with ominous elemental dangers and (possibly) the source of Elsa’s power. You heard it here, folks: Frozen II is Annihilation for kids.

Much like its predecessor, Frozen II is uniquely focused on wrapping warm-hearted, progressive messaging into its feel-good family fun. Where the first was about taking ownership of your life, and refusing to follow the script life has set out for you (especially if you’re a woman), Frozen II expands its reach to touch on the history of colonialism, which is a rather bold move in concept. You see, Arendelle, like America, has its own checkered history they’d prefer to ignore regarding relations with indigenous peoples — here, it’s the Northuldra, a vaguely-coded amalgam for a number of Native American tribes. As children, Anna and Elsa hear about a mysterious conflict that disrupted Arendellian and Northuldran relations forever (it doesn’t take a rocket scientist to figure out how the schism truly came about).

At its surface, Frozen II seems interested in correcting this error, and teaching kids that our history can be complicated and rife with historical injustices it’s up to us to repair. It’s a shame that doesn’t extend to the actual native characters, though; instead of incorporating them more prominently in the adventure (Alan Tudyk, Jason Ritter, Martha Plimpton), they’re sidelined so our (snow-white) protagonists can keep focus. In the end, the idea of restorative justice is given little more than broad strokes.

Even those main characters flail somewhat among the slings and arrows of the script (courtesy of Jennifer Lee, who co-directs with Chris Buck as they did with the first Frozen), forced to dilute their essences in service to the schtick on display. Granted, it’s good schtick: the animation is even more gorgeous than the first, six years of animation technology giving Elsa and her adventures a much-needed facelift.

But Elsa, Anna and the rest feel thinner, ironically more two-dimensional here: the sisters fare best, obviously, Frozen II at least finding new ways to test the resolve of their unbreakable bond. But Kristof is relegated to a dopey subplot about how to propose to Anna, and Olaf, well, he’s stuck with the same toyetic business he had before. If you weren’t on board last time, you’ll turn your nose up here too.

You heard it here, folks: Frozen II is Annihilation for kids.

Sonically, the Lopez-written songs are crackers — with “Into the Unknown” and “Show Yourself,” they make a game effort to find another “Let It Go”- style ballad, and “The Next Right Thing” serves as contemplative counter-programming, Bell’s mournful vocals punctuating a heartbreaking ditty about one’s moral compass. But the real standout is Groff’s ’80s power ballad “Lost in the Woods,” chiefly because they lean so charmingly into the inherent cheesiness of the genre (crossfades, spotlights, flowing Rod Stewart hair). As a vehicle for a soundtrack album, Frozen II comes closest to the original’s magic.

As a piece of animation, it’s frustrating to see where Frozen II succeeds and where it fails. On the one hand, it’s cracking entertainment, with lovely snow-capped visuals and catchy ballads you’ll be hearing in grocery stories and karaoke bars for the next six months or so. On the other, it feels rich for a sequel to center its thematic concerns around the inevitability of change, only to back away from that kind of change at the last possible minute. Characters flirt with major, status quo-upending shifts, but either renege or make those changes feel as comfortable and milquetoast as possible. Which is fine; it’s a kid’s movie, after all, and Disney’s goal is to entertain first and nudge at positive messages second. It’s just frustrating to see the risky, rewarding path this sequel could have gone down, only for the filmmakers to, well… let it go. 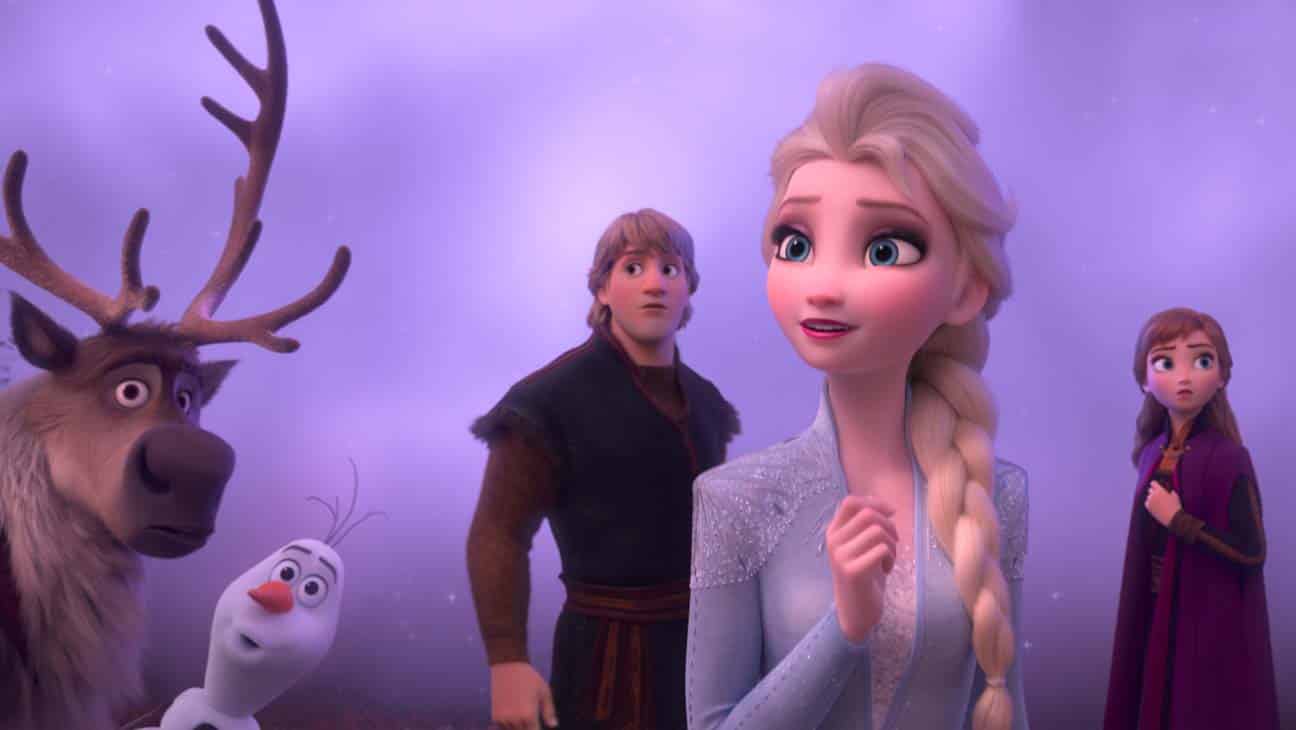