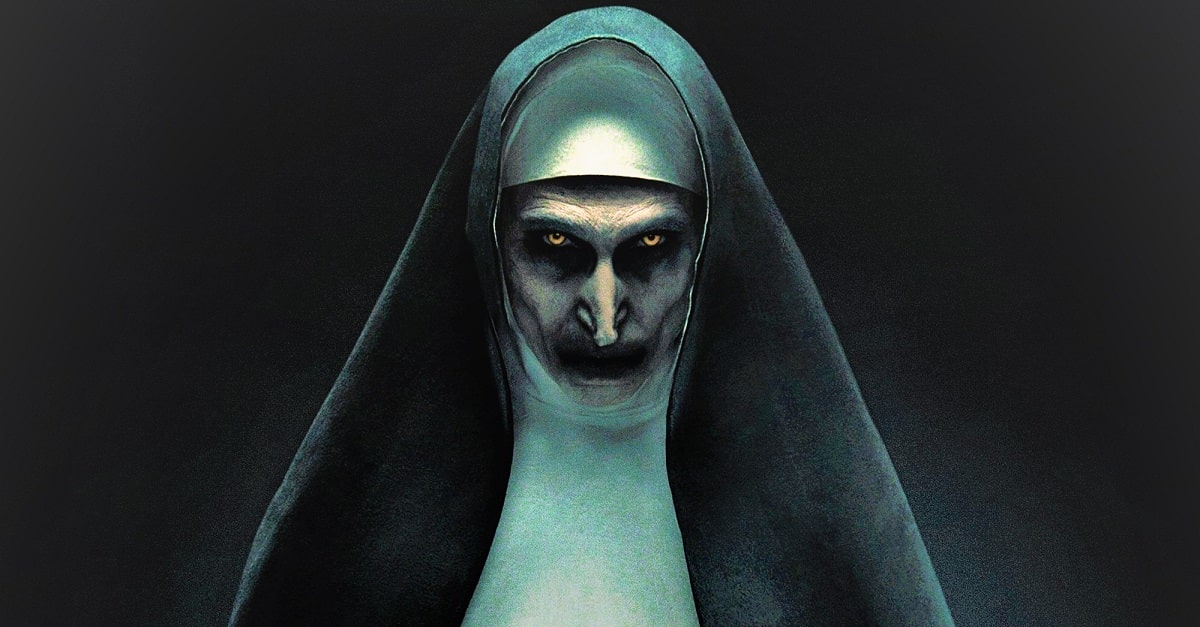 Expanding the ever-widening Conjuring universe, this origin story/prequel of one of the universe’s spookiest threats is downright silly – which may not be the worst thing.

Horror is arguably the genre that is the most dependent on its predecessors; every generation of horror filmmakers tries to recapture the horror of the past. In the 21st century, horror throwbacks have mostly focused on recapturing the grindhouse grit of the 80s, but Corin Hardy’s The Nun feels like a 1970s possession movie filmed on a Hammer Studios set from the 1960s. The result is a Gothic mystery mixed with some Satanic shock value.

In 1952, Father Burke (Demián Birchir) and Sister Irene (Taissa Farmiga) are sent by the Vatican to the isolated Abbey of St. Carta in Romania to investigate the suicide of a nun. Despite a warning from their guide, Frenchie (Jonas Bloquet) that the place is cursed, the pair arrive at the convent to a less than warm welcome from the sisters, who are reluctant to discuss the secrets of the cloister. As Father Burke and Sister Irene delve into the history of the Abbey, they are haunted by visions of both their past, and a demonic looking nun who stalks the halls at night.

While The Nun is a companion piece to The Conjuring film series, you don’t need to be familiar with the franchise to enjoy this movie. What you do need, however, is a healthy ability to appreciate camp. The world of The Nun is a world based on stereotype and shorthand: the Romanians all look and act like they come from the 1800s, the English school that Irene teaches in looks like it came from a Merchant-Ivory film, and the Abbey hasn’t had any upgrades since the 1400s. This shouldn’t work, but it often does, mostly due to production designer Jennifer Spence’s fantastic sets. The Abbey is gothic camp at its finest: graveyards that look like a sea of crosses, a cobweb covered library that for some reason doubles as a crypt and throne room, and a chapel with a crucifix that features a disturbingly headless Jesus. Aiding the set is the lighting, particularly the flashes of red light that accent the interior shots, giving the impression that hell is leaking into the abbey.

In contrast to the flamboyance of the production design, the acting is more understated, albeit also lacking in nuance. I can’t really blame them, however, since the characters they’re playing are all one note. Father Burke is ostensibly tormented by an exorcism gone wrong, but it doesn’t affect his actions or attitude in the story. Sister Irene has been receiving visions about the abbey since she was a young girl, but outside fulfilling a plot point, the only way it affects Famiga’s performance is that it makes her woozy sometimes. The only character who is somewhat interesting is Frenchie, and even he is just your run-of-the-mill comic relief.

Complaining about jump scares is as cliché as jump scares themselves (perhaps even more so), and the technique isn’t necessarily bad in and of itself. Jump scares can be thrilling and cathartic, and when paced well they can create masterfully suspenseful scenes. The problem is that the technique is only effective a few times, and if a movie relies on it for too long than the audience will be able to detect when the scare is coming, thus ruining the effect. Also weakening the scares is the lack of stakes they have. While the characters are constantly being jumped at, nothing ever seems to happen to them, which makes the film feel more like watching people walking through the world’s most expensive hell house.

Conventional horror wisdom dictates that you don’t want to show your monster too early. Hardy discards that wisdom in the first scene, where we see the Nun haunt The Conjuring protagonists Ed and Lorraine Warren (Patrick Wilson and Vera Farmiga, respectively) in a montage that looks like they stuck a teaser trailer at the beginning of the movie. Throughout the film, we are constantly assaulted with the Nun, and though there are scenes where she is obscured, in most scenes she is completely visible.

The overabundance of the Nun wouldn’t be a problem if she were a better villain. Her motives are never quite clear: she’s a demon who was trapped in the abbey until the bombings raids in World War 2 released her. In a smarter movie, she could be interpreted as a symbol of religious bigotry or zealotry, or even a symbol for the war that released her. In The Nun she’s just a creepy nun. That would be fine in most cases – the best thing about demonic entities is that they don’t need a reason to be evil – but here she’s just not scary. Partly, it’s because we see her too early and too often, but the main reason is because her design is just so arch. It’d be lying to say that seeing a nun with gray skin, yellow eyes, and fangs in a dark alley wouldn’t scare me, but this movie doesn’t use her effectively. Seeing a glimpse of her is terrifying, but since you’re familiar with her from the first scene (and the inescapable ads on Facebook and YouTube), it’s hard to do anything but laugh.

Despite its lack of scares, The Nun actually ekes out a fair bit of camp fun. if you enjoy camp, or big gothic buildings, or isolated Romanian hamlets where everyone speaks and writes in English, you won’t be bored (even if you’re not all that scared). In this way, The Nun is the best type of horror throwback: the kind you should watch with a big group. Because the fun of the film is to be around people and laugh with those who find it silly, and scream with the ones who find it thrilling, Together, in that darkened room, you can thank God that The Nun avoids cinema’s only mortal sin: boredom. 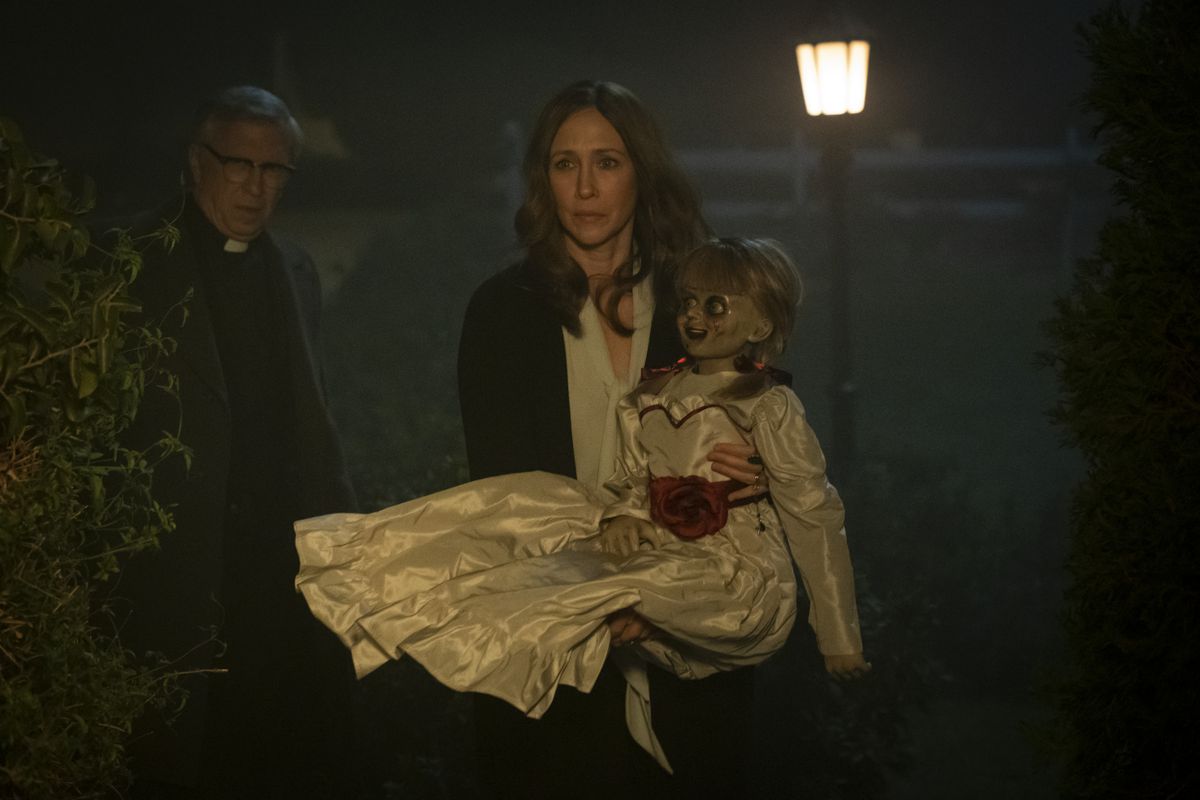 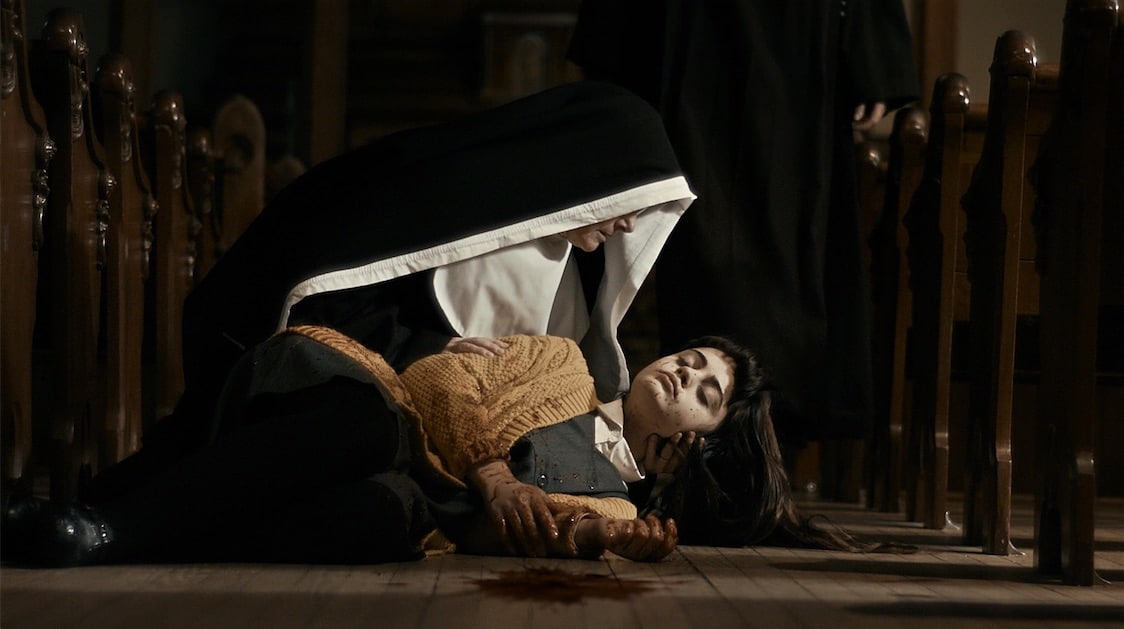 The Book of Birdie Review: Atmospheric Chills Abound in This Convent Thriller 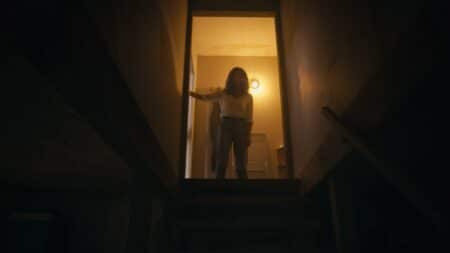 Barbarian is one wild ride with one surprise after another