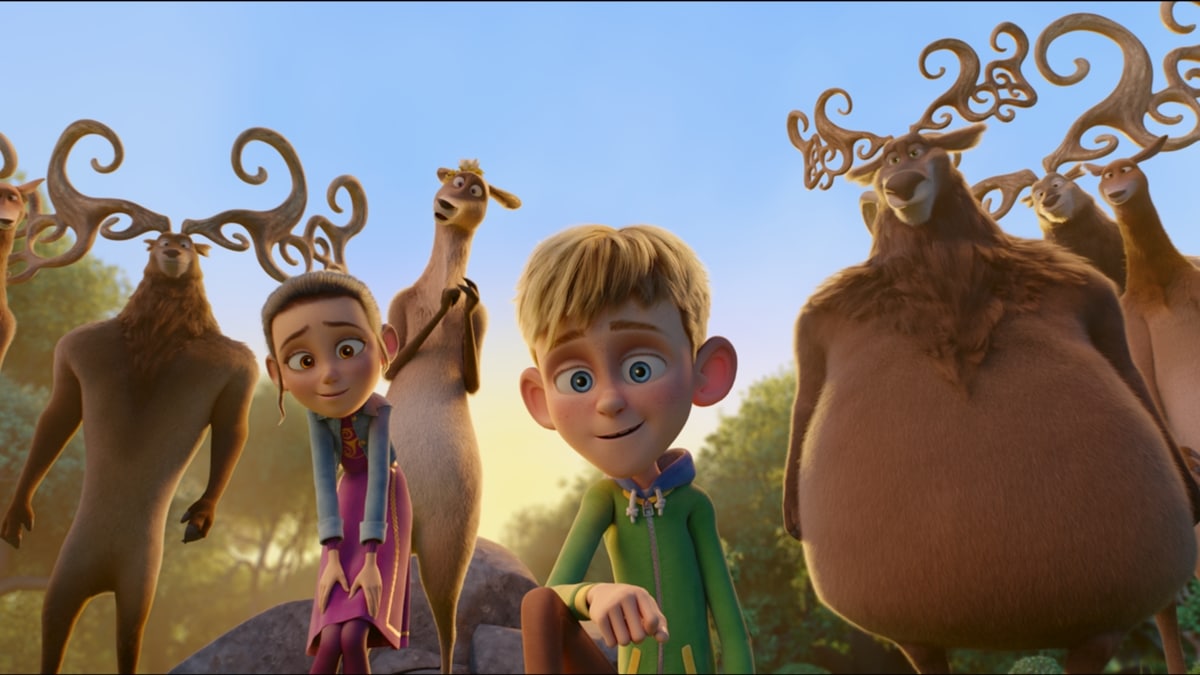 Too many farts and too much step dancing overshadow the film’s attempts at important lessons.

In 1996, a peaceful time of American prosperity between the Cold War and Twitter, music’s biggest things were imports. One was Canadian Queen Celine Dion, with her classic “It’s All Coming Back To Me Now” playing from car radios on constant rotation. The other was Irishman Michael Flatley who came to our shores with the step dancing phenomenon Riverdance.

A mixture of traditional Irish folk dancing with contemporary production values, the Riverdance show was an instant success. This was owed in no small part to Flatley’s overwhelming stage presence and this commercial that would play on a loop every five minutes asking you to buy the VHS for only $19.98 (before shipping and handling, of course). Now the show’s co-creators, John McColgan and Moya Doherty, have co-produced an animated origin story of sorts with Netflix’s Riverdance: The Animated Adventure.

Set in an Irish seaside town, the store centers on young Keegan (voiced by Sam Hardy). He looks up to his step-dancing Grandfather (voiced by Pierce Brosnan), who also mans the local lighthouse. But, after Grandpa sadly passes away from steppin’ too hard, Keegan finds himself on a typical Hero’s Journey.

He teams up with Moya (voiced by Hannah Herman Cortes), an outgoing girl from town who specializes in Flamenco dancing. They find themselves in a magical realm ruled by ancient deer-like creatures named the Megaloceros Giganteus. When Keegan isn’t busy learning how to protect the Earth’s rivers and streams through the power of step dancing, he has to defend his new friends from the evil Huntsman (voiced with the appropriate amount of gravel by Brendan Gleeson). He seeks to possess the creatures’ giant antlers to twist their power to his own evil ends.

Co-directors Eamonn Butler and Dave Rosenbaum, both veterans in the computer animation world, start strong with a beautiful opening scene featuring lush orchestration from Riverdance’s original composer, Bill Whelan. It introduces the characters and the town using traditional 2D animation reminiscent of Cartoon Saloon, the Irish animation studio behind classics like The Secret of the Kells and Wolfwalkers. That excitement quickly vanishes, though, like having a four-leaf clover blow away before you can reach it.

It’s an 80 minute, yet never-ending, slog from one fart joke to the next.

The rest of the film unfolds in the style of cheap computer animation devoid of personality or cleverness. It’s an 80 minute, yet never-ending, slog from one fart joke to the next. In the town, there’s literally an art store named “Far Arted.” Sadly, it’s not much worse than the record store called “Shamrock N’ Roll.”

There’s no narrative momentum either. Instead, the movie relies on throwaway sequences that offer nothing to progress characters or the plot. For example, what are we to make of a scene featuring sheep blowing around in the wind like loose cotton balls? It seems to exist only to pad out the running time. Riverdance also relies on a subplot involving two frogs named Rib and Bette (I’ll give you a few minutes to try to piece that one together). Their story involves searching for a lost tadpole and barely connects to the main thread.

Once we get to the land of the Megaloceros, a place that’s supposed to be the pinnacle of wonder and beauty in this kids’ movie, it appears the budget got thin. We get dull, empty landscapes with some grass, sand, and a bunch of magical deer creatures that look the same.

There’s also the problem with the titular dancing. As talented as Irish step dancers are, as enthralling as it can be to see it live, it just doesn’t translate into visually engaging cinema. Not even if it’s talking deer. The dance numbers are also too similar to each other. There are only so many ways to keep your arms perfectly still and have those legs going without looking tedious.

There are important themes and lessons here for kids to take away. However, the movie has a hard time teaching them when there are more farts and step dancing to be had. It’s essential to learn from our ancestors and keep them alive through tradition, but for a movie about the celebration of life, there’s barely a pulse. Riverdance can be a quick distraction for kids or an easy way to get them to sleep. Either way, at least they don’t have to suffer through those Riverdance commercials.

Riverdance: The Animated Adventure will start dancing across your screens on Netflix on January 14th.