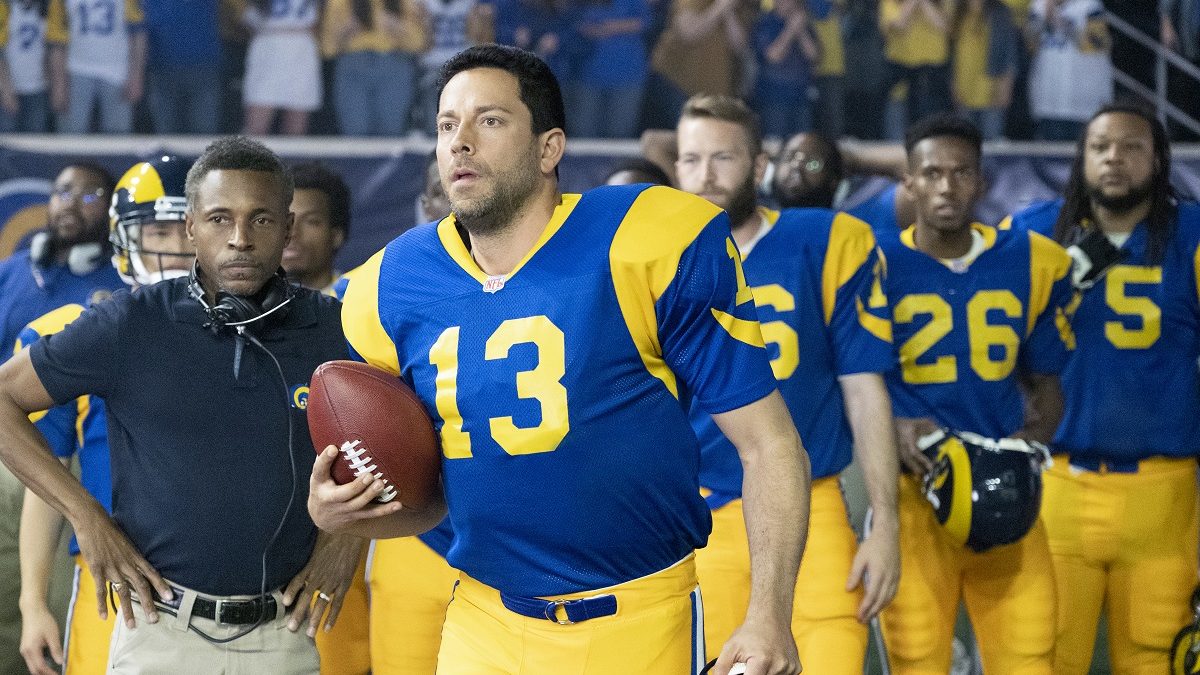 The Zachary Levi-starrer goes little on the message, heavy on cliché.

NFL Hall of Famer Kurt Warner started as an undrafted, unwanted quarterback bagging groceries and wound up leading The Greatest Show on Turf with the St. Louis Rams. It’s a true story so improbable that it shouldn’t be believable as a movie. But, now that it’s a real movie in the form of American Underdog, a faith-based biopic, it does seem unbelievable. That’s not because of the inspirational tale; it’s because it’s such a mediocre sports film.

Directed by Andrew and Jon Erwin, Underdog focuses on Kurt (Zachary Levi) through the lens of his relationship with his wife, Brenda (Anna Paquin), who he meets while playing college football at Northern Iowa. Despite a limp script written by David Aaron Cohen, Jon Erwin, and Jon Gunn that recycles from better romance films and better sports films, Paquin can hold her own as Brenda. She gives the movie its only full performance as she grows from a down on her luck woman with trust issues into a confident person and true partner to Kurt.

The scenes between her and Levi early in the movie, where Paquin slowly opens herself up to this wannabe professional quarterback, are some of Underdog’s most effective moments, but it also sells her short. Brenda is a former Marine, a young single mother of two, and someone who tragically loses her parents in a natural disaster. That’s a life that deserves its own showcase. Still, by film’s end–despite a few attempts to show her wrestling with her faith after facing so many tragedies–she’s just another wife cheering her man on from the stands. It makes it seem like God’s plans for her are to learn to trust Kurt in the first two acts and then be a dutiful wife in the final act.

It’s also strange seeing a performer of Paquin’s caliber in a film with Christian undertones. It’s like finding out the cool friend you smoked with behind the bleachers in High School became a priest. But, to the movie’s credit, it doesn’t hit the audience over the head with Bible quotes or reasons why we need saving. The first thing we hear at the start of Underdog being Ronald Reagan doing the coin toss for Super Bowl XIX worried me. However, it treats Kurt and Brenda’s faith as something important to their identity without making them condescending or preachy about it.

The Erwin brothers can successfully weave strong Christian elements into a traditional movie structure with the help of legit actors and higher production values. This has paid off in the past. Their last film, 2018’s I Can Only Imagine, made a shocking 86 million at the box office. That doesn’t mean the effort works, though.

It may avoid alienating non-Christian audiences, but it will bother people who hate clichés. It leans heavily into the football metaphor of “staying in the pocket.” A good quarterback knows to stay in the pocket and keep their composure under duress. They shouldn’t run away when danger comes at them. Sorta like life, ya know? It seems like every coach in Kurt’s football career tells him this. Each time it feels like the movie is screaming at us what we need to take away from it. The feature also loves to tell us over and over some variation of the line, “I’m chasing my dreams no matter the odds,” going so far as to open Underdog with the odds of becoming an NFL QB.

It’s a live-action Wikipedia page that goes from one important life event to another, with no momentum between scenes. One minute Kurt is daydreaming at his grocery store job, looking at Dan Marino on a box of Wheaties, before starting in the Arena Football League only a few minutes later.

By the way, the Erwin brothers shoot these arena football scenes with the intensity of a barbed wire cage match. It’s the most unintentionally funny part. Fans scream with bloodlust from the stands. The room is dark and smoky, with the sounds of bones crunching as they fly into padded walls. Maybe arena football was more intense in the early 90s, but no league can be cool if KISS owns a team.

There’s also no poorly written scene a motivational speech can’t save, especially if Dennis Quaid gives it. He shows up in the final act as St. Louis Rams coach Dick Vermeil, the one NFL coach that would give Kurt a shot. Quaid puts on Coach Dick’s “Ah shucks” demeanor and his squirrelly physicality to a creepy degree. You hire Quaid to be Quaid, not a schlubby NFL head coach.

The real Kurt Warner, who defended his teammates when they kneeled during the national anthem to protest against police brutality, seems like a genuinely nice guy with a movie-worthy life. Notably, Kurt also executive produced American Underdog with his wife, Brenda, so it may not always be the best idea to tell your own story, even if it’s incredible.

American Underdog takes a snap on December 25th in theatres.