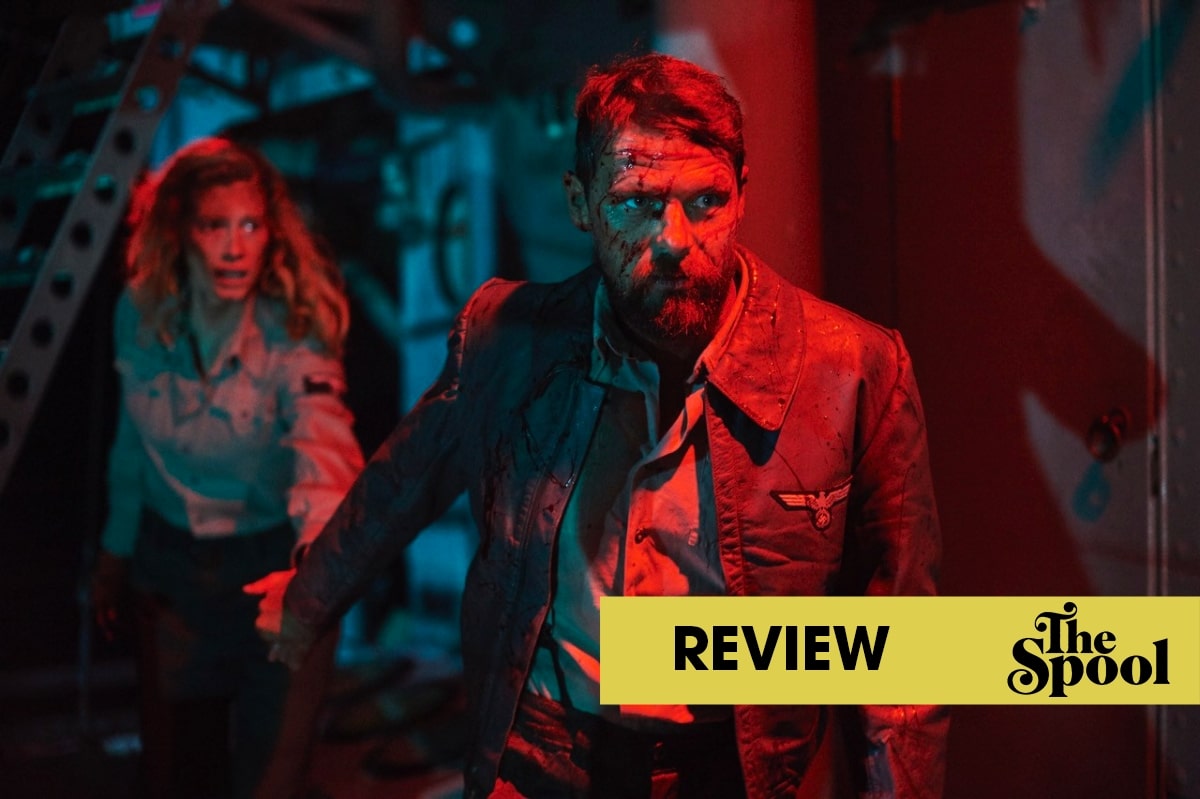 A throwback to the luridly entertaining Nazi grindhouse films of the 1970s and 1980s down to its evocative title screen, Australian filmmaker Justin Dix’s Blood Vessel is a smart but oddly timid single-location creature feature. Set at the tail end of WW2, the plot is predicated on the trivia that German ships were under orders to sink hospital and merchant ships. A rich historical vein, hospital ships and especially the Merchant Marine – Civilian sailors who were often tasked with transporting Allied supplies –  were so frequently torpedoed that the president of the Boston Seaman’s Club coined the wryly named “40-fathom” club for those who weathered these encounters.

That level of detail is less germane to Dix and co-writer Jordan Pross’ script, which boils a melting pot of Allied lifeboat survivors drifting after their hospital ship sank. It’s valuable context to illustrate the mood and urgency of the survivors as they discover a seemingly abandoned Nazi U-boat (an enormous draped swastika flag is the first of many omens). After losing a passenger to a propeller on the climb up the ship, the group splinters to survey the ship and find less than promising results including a corpse in the cabin who looks like he was sluiced in a juicer.

Hailing from an assortment of countries (US, England, Australia, Russia) and representing a variety of professions (soldiers, snipers, cooks, nurses, code breakers), this is already a disjointed party. Tensions quickly flare across personal, professional, and prejudicial lines – singling out the levelheaded American cook, Lydell (Christopher Kirby as the highlight of the cast), who is unfortunately the sole person of color among the group; and shrewd Russian sharpshooter Alexander (Alex Cooke). Some of these conflicts feel involving, particularly one in the engine room with the otherwise cartoonishly confrontational Jimmy (Mark Diaco). Just as often, these fracases feel conceived only to reinforce the batty dynamics of this band of misfits.

Other characters are more naturally cooperative. The de facto leader, Nathan (Nathan Phillips), is a bit bland in conception – a motivational backstory with his wife is eye rolling – but he’s a sturdy hero character. Usually banded together with the woefully underused Jane (Alyssa Sutherland), these two feel the most equipped to handle this situation, even as the script often lets them down as more than agents of narrative change. Sutherland, in particular, is the epitome of maternal cliché, and defined only by her status as grieving mother in a notably thin fashion compared to almost every other character. A scene where half of the male characters play show-and-tell with their war wounds verges on parody as she looks short-of-breath with each new scar, even as she’s ostensibly a nurse.

Rather, Dix feels most engaged as a filmmaker when someone find peripheral mythology related to the ship and its contents. An engraved Book of the Dead and a cryptic film reel is particularly juicy, and by the time, gold bars and a huge wooden crate come into play – the film is firmly in its comfort zone. A subplot with a hidden child in a gas mask (Ruby Isobel Hall) is also entertaining until it runs into the constrictions of the plot. That inevitably brings us to the largest and single most puzzling issue of Blood Vessel: it doesn’t take advantage of its considerable resources.

Dix is not only an experienced director but the creator of Wicked of Oz studios, a prolific practical/visual effects studio that’s had a hand in a diverse range of Aussie productions from Lake Mungo to The Babadook. As seen throughout, the practical effects are impressive – the desiccated corpses strewn throughout the ship and appropriately slimy work from DP Sky Davies and production designer Otello Stolfo ooze atmosphere. More digital effects like blood and various monstrous details likewise have the right bite for a picture of this size.

It’s instead best described as shy in how it employs its monsters, almost entirely quarantining them into a single chamber. The real-life ship setting is ripe for predator/prey dynamics that would be the bread and butter of this effects house – but so much of the film confusingly relies on cheap cross-cutting to communicate their abilities. In effect, these sequences operate like remote possessions with known characters when all the viewer wants to see is some good ol’ fashioned one-on-one carnage. A late sequence offers some of that withheld catharsis as two characters slice through a pack of the Third Reich (not enough movies about killing Nazis right now), but it too often plays like they’re afraid to unleash their main attraction. Blood Vessel is so concerned with the hunt that it forgets to draw blood.

Justin McConnell’s lean, fascinating horror-drama blends an intriguing structure with some novel investigation into the psychology of its shape-shifting horror monster. This piece was originally..