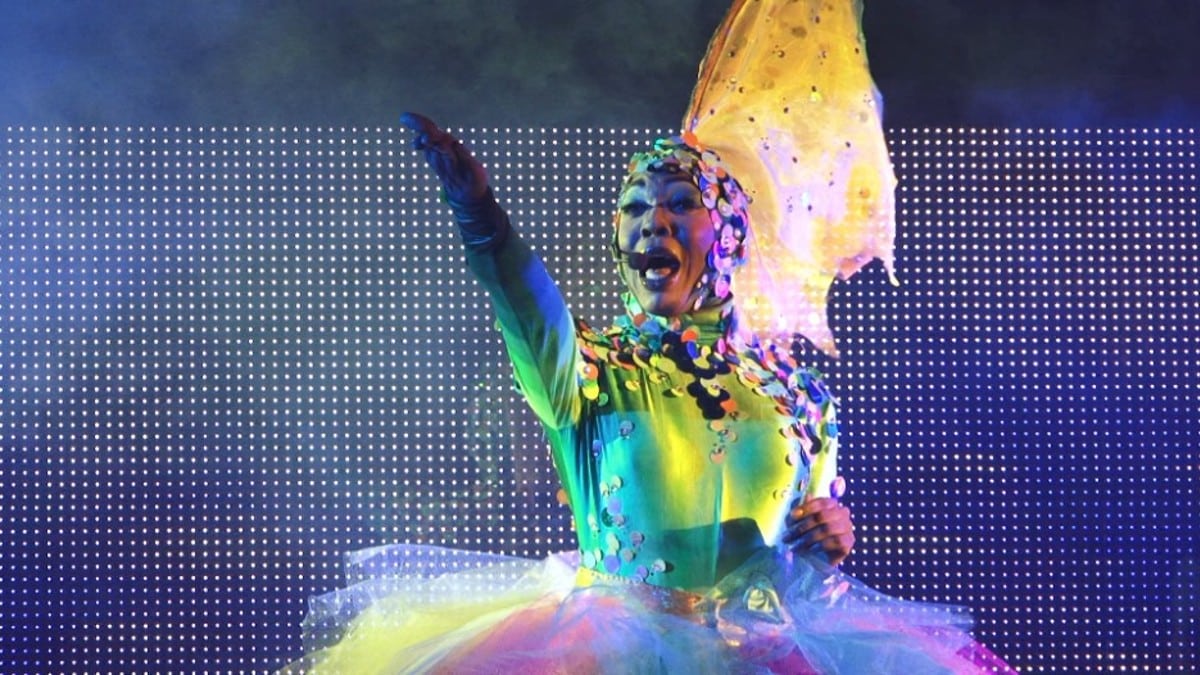 “I want a nickname like Cameroon,” a young white gay squeals as he meets BeBe Zahara Benet. The drag queen, tv personality, and African beauty smiles kindly but doesn’t respond. While she may have won the first-ever season of RuPaul’s Drag Race in 2009, with RuPaul calling out “Camerooooooooooooon” at every runway entrance or any chance she felt like, BeBe has struggled to put herself and her home country of Cameroon on the map.

Being BeBe is an exciting documentary that attempts to peel the clinging fans off BeBe’s marvelous gowns to let her stand up and stand out on her own as an immigrant artist with a story to tell. Remarkably woven together from years and years of footage shot by close friend and doc director Emily Branham, Being BeBe offers a rich visual sense of the remarkable journey from Africa to pageant sensation, television star to stage performer, from obscurity and back again.

The queen isn’t known for being vulnerable. On seasons one of Drag Race and three of Drag Race: Allstars, BeBe gives face, world music extravaganza, and regal realness, but doesn’t give much of herself. Branham is able to peek behind the image just a little with the aid of all film she’s acquired over their friendship. Though not fully detailed in the documentary itself, it’s clear BeBe and Branham have known each other for some time; not only comfortable with each other, Branham has complied enough footage to build a detailed audio-visual record of BeBe’s journey.

Branham’s recordings allow 2020’s BeBe Zahara Benet  to quite literally look back at themselves as Baby BeBe and provide a highly amusing, self-reflective commentary. We also get a much deeper look at their life as “just Marshall,” the little boy from Yaounde, Cameroon, whose loving parents want nothing but success from him and his four siblings. While the early footage of BeBe is a fascinating archive of personal and drag history just before the hurRUcane, it’s the family footage that’s most endearing.

Branham’s recordings allow 2020’s BeBe Zahara Benet to quite literally look back at themselves as Baby BeBe and provide a highly amusing, self-reflective commentary.

“He was a gift to us first and then to the world,” his sister says with a huge smile. Getting to know BeBe’s family (in the Western and African senses of the word) helps us understand her so much more. If her head is at all uneasy wearing the crown, it’s because she feels a responsibility as an African immigrant to strive for excellence and represent her culture proudly. Though we witness a few awkward attempts by white producers and teachers to strip it from her, BeBe always returns to her Africanness for inspiration.

And we get to see this inspiration reach across as well. While BeBe is back in Africa for a death in the family, Branham uses the opportunity to meet some queer Cameroonian men and show them a little bit of BeBe’s footage. Though their faces remain obscured for their safety, we can hear their pride and enthusiasm for their voices. “She’s living,” they say, “not just surviving.” The personal histories of these men are difficult, but their voices are necessary to hear. It’s a rich, complex sequence that puts queer struggle into a global perspective without feeling exploitative.

When it comes to Cameroonian politics, BeBe thinks there is “too much going on” politically for gay people to ask for rights. It is here that Becoming BeBe stumbles. It attempts to call out the political strife queer people in Cameroon face but gives poor context to why this iteration of trans/homophobia exists. Little explanation is offered about Cameroon, its history, or its contemporary issues.

Furthermore, addressing Cameroon’s history would mean addressing the reason why all this violent homophobia is expressed in French. Without addressing Cameroon’s colonial history, Branham’s picture of the nation and BeBe’s Africanness is incomplete. It’s a missed opportunity to assert that ending homophobia is a decolonial process. Instead, Being BeBe backs away from the more vicious side of politics, and leaves Africans in the lurch as the cause of and solution to their own problems.

Cameroon is not a nickname. “It is a country in Africa, which is a continent,” BeBe reminds the packed crowd of a bar. It is the country and culture she represents and does so with a great deal of care and dignity. Though it skirts directly confronting relevant and vital issues like those facing African masculinities or the white exoticization of Africa, Being BeBe is nevertheless a head to heels addressing of an African queen who has paved the way for queer African representation and reality television simultaneously. 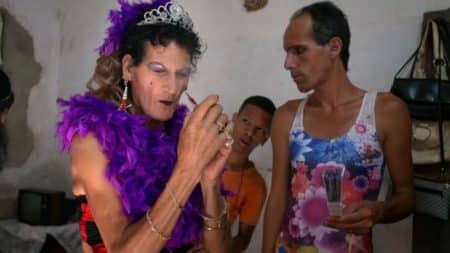 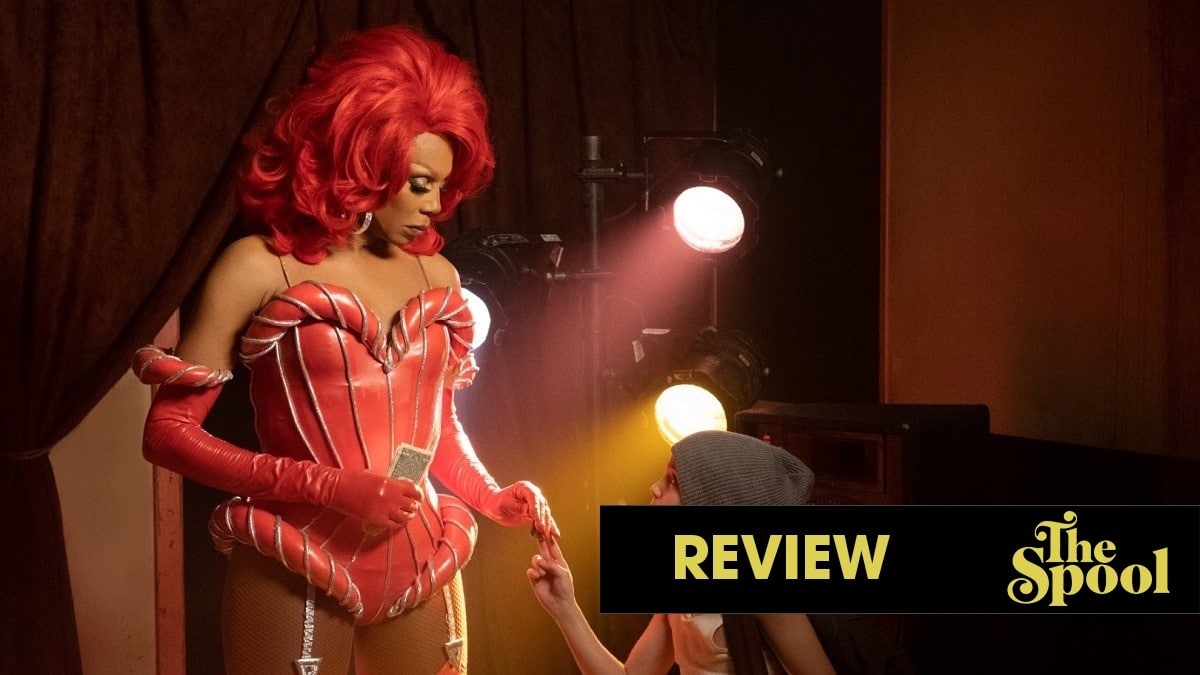 “AJ and the Queen” is a Fun, Frothy Road Trip

RuPaul and the creator of "Sex and the City" team up for Netflix's lighthearted sitcom about a drag queen & a runaway kid. 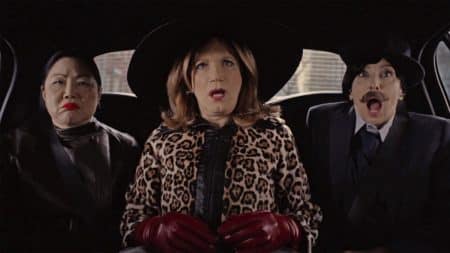 Reeling 2021: The Sixth Reel is a hilarious, warm, cinephiliac comedy

With The Sixth Reel Charles Busch writes, directs, and stars in a delightful, frantic, thoughtful picture about the hunt for a lost film.