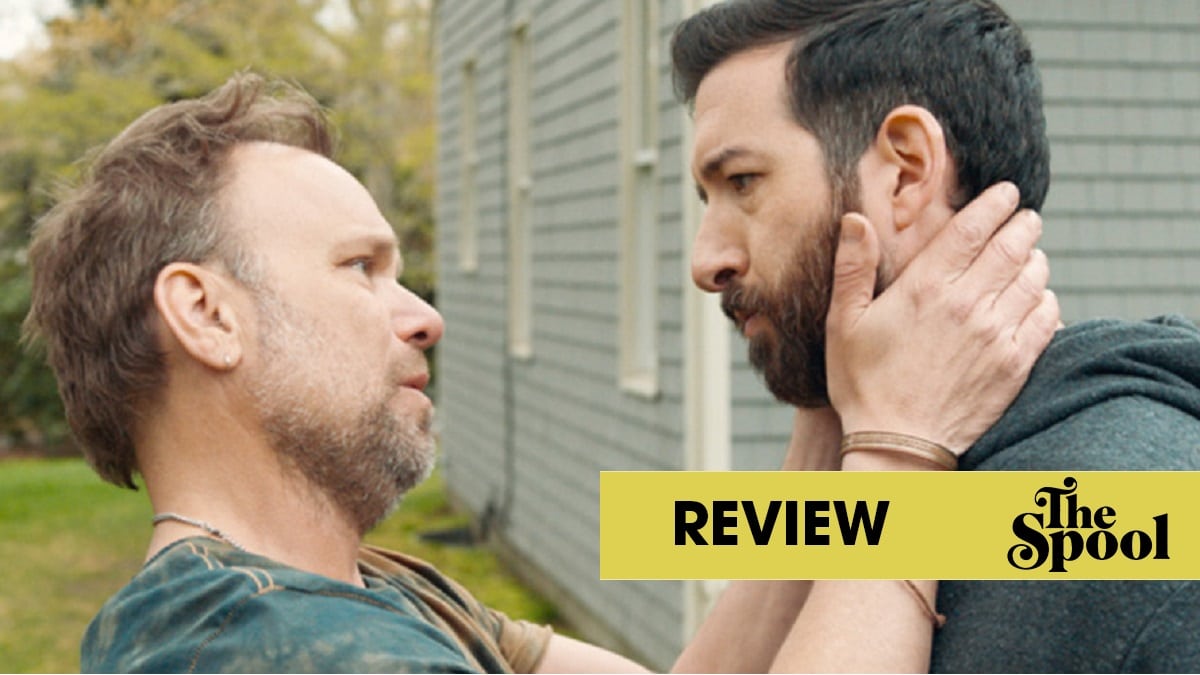 This queer drama is rife with potential and strong performances, but squashes its promise with too-neat storytelling.

It only takes a shot of a suit coat in a car window while an acoustic guitar plays to tell us we’re on our way to a funeral. We can normally chart this plot straight as the Cameron Crowe flies. Paul Riccio and Jamie Effros’ feature debut, Give or Take, queers this trajectory, but it may not be enough to stray from the predictable path.

Give or Take opens with Martin (Effros) returning to Cape Cod to finalize things after the death of his father. But as soon as he arrives and finds his dad’s grieving partner, Ted (two-time Tony winner Norbert Leo Butz) won’t speak to him, it becomes readily apparent that the emotions won’t be so easily packaged up and stored away.

Here we have the predictable independent cinema fare: the death of the white patriarch, unresolved isolation from the family unit, nebulous moralities, city vs. small-town life, a small cast of locals, meanings, and symbols are encoded in nostalgic items and property. The film ticks all the boxes for a contemporary melodrama. The queerness of the central couple is largely incidental.

It’s a fine movie. Effros has a suitably uncomfortable demeanor about him. We can feel his discomfort in recognizing the irreparable distance between him, his memory, and his dad. Like the house with only dial-up internet, his Martin connects to the world only through outdated modes. Butz carries a lot of this emotional heft, making more understated choices to express Ted’s grief than we’d expect. They’re almost invisible at times, but they add to the gravity of what he’s expressing.

Effros and director Riccio have written a textbook drama that’s structural and finds/develops the right symbols. In fact, they spend so much time layering buried emotions that after a while, the excavation all starts to look and feel the same.

In classical melodrama, a sudden shock would take us out of the boredom the genre necessitates. But nothing is impossible in Ricco and Effros’ film; it’s all too logically thought out, too calculated. For its two-hour runtime, it doesn’t offer enough emotional highs and lows to carry us through.

That said, Cheri Oteri snaps us to attention every time she’s on-screen as the real estate agent interested in selling Ken’s house. If she ever left the top of her form, she’s back on top of it again, and in an Aircast to boot. She’s wild-eyed, setting her own rhythm in every scene, a sparkling ray of manic sunshine in this otherwise overcast picture.

Nothing is impossible in Ricco and Effros’ film; it’s all too logically thought out, too calculated.

Which isn’t to say there isn’t comedy in Give or Take: there are some wonderfully written moments of deflating humor. But there isn’t enough of it to support the overall storytelling because it reaffirms distance even after the characters come together. The noticeable exception to this is an encounter with a stray critter, which pushes our characters together at a crucial moment.

For a film about a dead queer person, very little about this film feels queer. Martin’s dad Ken came out after Martin’s mom died; he met Ted late in life; his queerness is largely foreign to Martin. And it remains that way, because in the moments where Martin does find out about his dad’s life with Ted, he finds they shared unthreatening masculine things, like an interest in baseball or taking care of their house.

Sadly, it seems the most interesting character is dead before Give or Take ever begins. There’s a queer kid who’s got the right idea about floating in a think-tank trash can, but Riccio and Effros only use him to model Ken and Ted’s openness and generosity, a kind which Martin never saw with his dad. But the concept of a father who came out late in life while also managing chronic illness seems like a missed opportunity rife for rich representation. It seems that, in order to give a fresh take on a classic story, the filmmakers took away what was most interesting about their new perspective. The story is like Ken in that way: cremated in its prime and set adrift.

Give or Take Trailer: