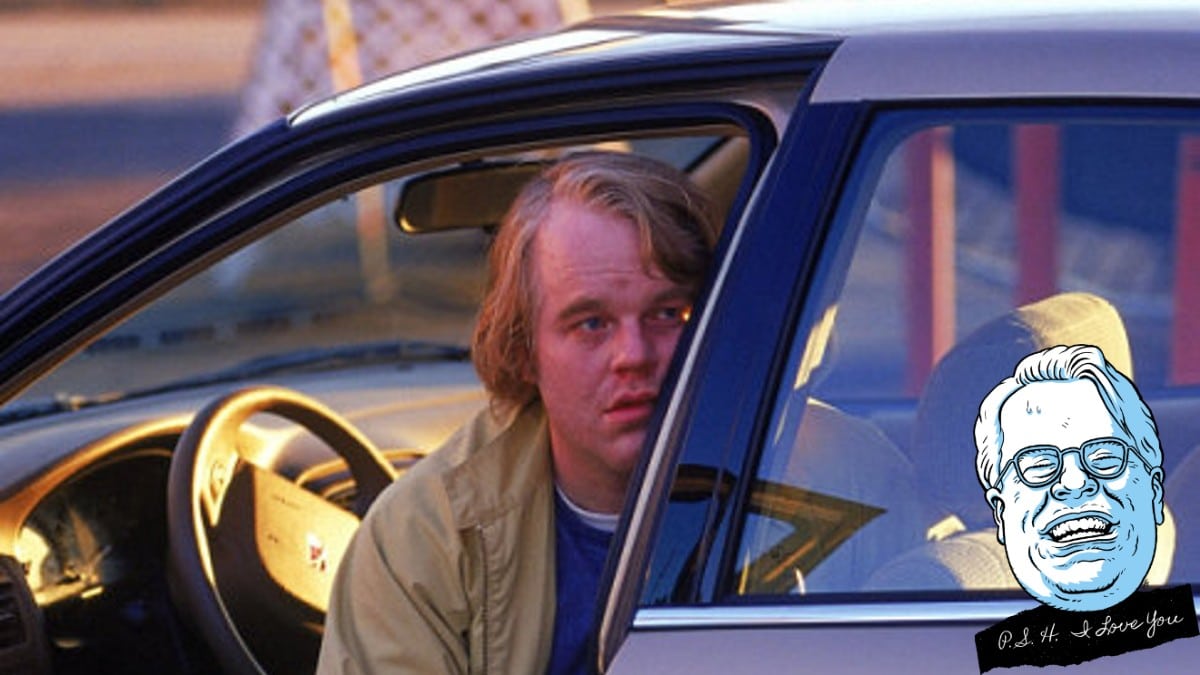 Love Liza concludes with its title, the signature on the suicide note left to Wilson (Philip Seymour Hoffman) from his wife. She took her own life, just days before the start of the film. What follows is a deep a plunge into the depths of human misery. If you thought The Savages found Hoffman utilizing his talents to make an honest, supremely depressing movie, well, you ain’t seen nothing yet.

Wilson discovers the note early, but he can’t bring himself to read it. He’s a mess. Would you be any better? For all ninety minutes, Wilson is in freefall, in the midst of a breakdown, on the edge of an even worse breakdown. But Hoffman never flubs, exaggerates or misleads, his performance not missing a single note.

Essentially, Love Liza wouldn’t exist without P.S.H. Last week, I wrote that by the late nineties – relatively early in his career – Hoffman had already turned in a collection of lauded, impressive performances. His talent and its recognition meant that he could leverage his status into financing for projects he cared about – Love Liza was written by his older brother, Gordy Hoffman. This isn’t strictly a family affair: the Hoffmans picked actor-turned-filmmaker Todd Louiso to direct. (I’m surprised longtime friend Bennett Miller, who Hoffman would eventually make Capote with, wasn’t involved). It was the very first film Hoffman ever starred in.

Wilson’s a web designer – in the wake of this tragedy, he hasn’t taken any time off from work. After it’s strongly suggested that he should, Wilson heads back to the beach resort where he and Liza went on their honeymoon. It helps, for a minute. Watching Hoffman run back and forth into the waves, I couldn’t help but think of his character learning to swim in Jack Goes Boating. There, getting in the water signaled a new beginning, with Jack leaving his comfort zone to start a new relationship. But while Wilson knows how to swim, he couldn’t be further from either self-improvement or a fresh start.

If you thought The Savages found Hoffman utilizing his talents to make an honest, supremely depressing movie, well, you ain’t seen nothing yet.

Vacation ends. Back home, Wilson turns to huffing gasoline to numb his loss. Considering the actor’s own relationship to substance addiction, these sequences take on additional tragedy – Wilson gets high because he has no other tools to fight his depression. Hoffman would later play an addict in Before the Devil Knows You’re Dead, but here his character doesn’t have any genre-based schemes to save himself, making it all the more difficult to separate actor from role. The screenplay creates a much more down-to-earth spiral for Wilson, the delicate artifice causing the performance to cut even deeper.

We know the widower feels immense guilt over his wife’s death, but we don’t learn much about the dynamics of their relationship – or to what extent his guilt is warranted. Truth is, it wouldn’t matter. Love Liza takes a more impressionistic approach, one that keeps its focus on Hoffman processing and expressing this character’s feelings. Louiso’s handheld, shot-for-Sundance cinematography compliments this direction. Hoffman conveys a confused mix of grief, shame, anger and sadness – Wilson can occasionally manage to pull himself together, before fully falling apart a few moments later.

It’s a true sense of fragility Hoffman locates here; no one emotion could ever be enough. His feelings can only collapse in on themselves, from immense sorrow to despondent self-endangerment to insincere joy. And so, to try to get some distance from his emotions, the gas huffing. All of these ideas are present in the script, but it’s only through Hoffman’s work –that is, Phil’s – that they are brought to life, becoming a convincing snapshot of a bleak psychology.

Hoffman struggled with addiction and depression all his life, sobering up in his early twenties and throwing himself into his work. He made Love Liza about a decade later. This is not a particularly optimistic film, asking the viewer to empathize with Wilson even as he alienates everyone who’s trying to help. When a co-worker drops by to check on him and smells the fumes, he “covers” by saying he was refueling his model plane.

Turns out, her brother-in-law flies toy planes too! With nothing better to do, Wilson winds up getting really into R.C. vehicles. He drives for hours to attend a convention, his sad new hobby an apparent grasp to control something. All the toy boats in the world don’t do much good. Eventually, there’s nothing left to do but read Liza’s letter.

It’s the rare instance we get to hear from her. I struggle with the film’s apparent lack of interest in Liza – Wilson tends to avoid talking about her, and we don’t get much of a sense of who she was. Then again, I’m not sure who or what could’ve measured up to Hoffman’s performance in all its magnetic tragedy. Love Liza is successfully able to portray one depressed, dysfunctional personality, perhaps two would’ve been overkill, or ineffective; to the extent that it’s successful, Love Liza’s success can be traced back to Hoffman’s uncompromising exploration of irreconcilable pain. It hurts, going this deep.