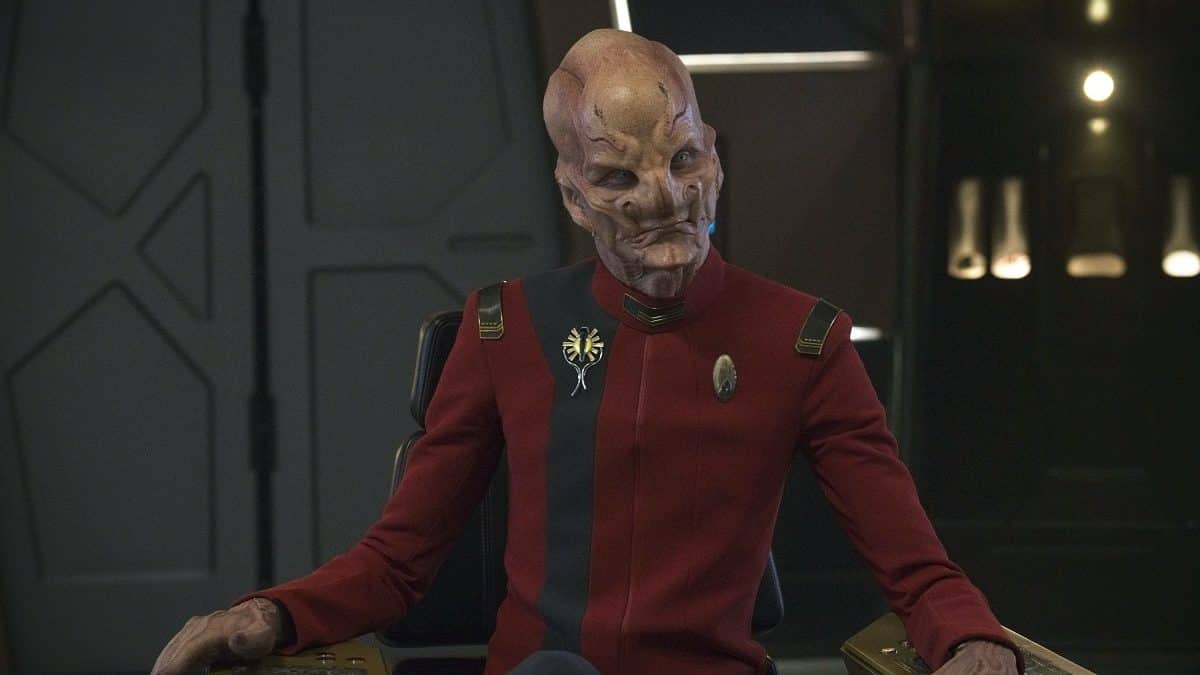 Star Trek: Discovery has gotten better in its story choices, both big and small. The season-length threat of an unpredictable anomaly brings how uncertain peril affects the psyches of different civilizations and individuals to the fore. It’s a commendable metaphor for any number of looming real-life maladies. The pall it casts supports the season’s broader arcs and themes. To the same end, the show’s creative team smartly divides “The Examples” into separate, discrete plots, each with its own obstacles and impacts on the characters. The episode’s construction is sound.

But even the best-built story in the world can’t save you if your presentation’s nuts and bolts are lackluster. Unfortunately, that’s the case for this episode as well. There’s zero subtlety to the writing in “The Examples.” No point is too nuanced, no revelation is too personal, that a character can’t simply announce it with all the grace of a Klingon hug. The major players here don’t have conversations with one another so much as they simply trade speeches. Meanwhile, the actors, hobbled by such unnatural dialogue, give performances that veer between affected and overwrought. And the score, which strains to inject genuine emotion where the material fails to justify it, starts to feel overwhelming.

In short, the season’s fifth installment is emblematic of Discovery’s continuing successes and failures. It boasts potent ideas and intriguing character beats. However, they’re weighed down by a disappointing bluntness and middling delivery that nearly stop the show in its tracks.

The tracks are still good, though! In the main plot, Burnham (Sonequa Martin-Green) and Book (David Ajala) beam down to a colony imperiled by the DMA to rescue a group of prisoners the local magistrate would rather leave for dead. It’s an errand of mercy, one borne of the steadfast principles Michael, and the Federation she represents, hold dear. The combination of a clear problem to solve paired with a motivating moral principle make for some classic Trek.

However, the situation grows more complicated when Book and Burnham reach the prisoners. They’ve been given life sentences for petty crimes and resent Starfleet for tolerating such injustices. There’s a resonant conflict between Michael, who wants to fulfill her ethical duty to evacuate these people, and the inmates, who don’t trust an organization that always had the power to save them but turned a blind eye in the name of “not our jurisdiction.”

There’s real meat there! The moral duty of powerful nations, weighing their right to intervene against the right of all people to live in a just society, is a strong idea to explore. The problem is that Discovery can’t dramatize it in any way that even approaches how such conflicts might play out in terms of actual human interactions.

Book and Burnham aren’t there for fifteen seconds before the prisoners turn into exposition machines. Their back and forth with Michael plays like dueling entries in an essay contest rather than real individuals hashing out vital points of contention. And the action-y threats of the prison’s automatic defense systems seem tacked on. None of it feels genuine or urgent, weakening both the moral conundrum and the episode’s ability to communicate these worthwhile notions in an affecting way.

The same goes for the engineering story in this one, as Starfleet Command orders Stamets (Anthony Rapp) to work on the DMA problem with an eccentric, haughty fellow scientist of note named Ruon Tarka (Shawn Doyle). Stamets resents Tarka for spearheading the next-gen spore drive project without ever consulting him. And when Paul meets the man himself, he discovers that Tarka can indeed be oblivious and abrasive but is also adventurous and committed to experimentation as the core of science, qualities he finds admirable.

None of [threats] feel genuine or urgent, weakening both the moral conundrum and the episode’s ability to communicate these worthwhile notions in an affecting way.

There’s worthwhile stuff here too. In practical terms, Tarka has a theory about who might be controlling the DMA and how a miniaturized experiment could prove it. Of course, the grand leap from “The anomaly’s blinking in and out of existence!” to “It must be artificially created and directed by someone!” is a specious one. But a new scientist coming in to test that theory with a mini-wormhole, prompting Stamets to test his limits, is a good setup. Plus, hey, it’s a solid excuse to bring Jet Reno (Tig Notaro) back for the first time this season!

But here again, “The Examples” conveys the tension in such a thudding fashion. It robs the gulf between Stamets’ cautious, theory-heavy approach versus Tarka’s devil-may-care, experimental attitude of dramatic force. Discovery simply writes it on the screen here, with clichéd exchanges about whether or not to push the bounds of safety in the name of progress. There’s no nuance or humanity in it, just a rank concept delivery mechanism.

It doesn’t help that Tarka’s already a chore. Granted, some of that’s intentional. But Discovery’s clearly setting him up to be a major character this season. Despite his propensity to grate, he’s also intended to be a tad charming, or at least intriguing. Instead, he’s an off-the-shelf “wildcard” type. His Dr. McCoy-like delivery and Dead Poets Society-esque exchange with Saru can’t cover the fact that he’s a corny, stock character without the “daring bad boy of science” qualities the episode seems to want to evoke.

Once again, it’s the smallest, most intimate story with the most success here. In a one-scene wonder, Dr. Culber (Wilson Cruz) confesses to Kovich (David Cronenberg) that he’s not just overworked; he’s overwhelmed. Hugh, dispirited and afraid of what might be coming as anyone, remains compelled to push and push himself. He feels obligated not only to keep counseling his fellow crew members but to lie to them and tell them it’s okay when he doesn’t believe it himself.

In the midst of a pandemic that’s been taxing to nearly everyone, there’s real resonance in Culber’s dogged devotion to his work, even as he loses some faith in himself and the state of the world, in light of the challenges facing each. Kovich is curt as usual, recognizing Culber’s savior complex and cajoling him to make a call for himself. But giving the doctor the spotlight, just for a moment, to grapple with the weight of all that’s happening, and the difficulty of needing to support so many people’s fragile emotional states when he is emotionally compromised makes for the most poignant and human moment in the episode.

“The Examples” goes for poignance in the finish to Burnham’s story as well. She finds the traditional Trek middle-ground solution to the dilemma with the prisoners. When they insist they’ll only go with her if she guarantees their freedom from unjust captivity, she finds a regulatory loophole that allows her to grant them asylum and review their cases under Federation law. Convenient? Sure, but within standard Star Trek operating procedures.

The catch is that the most vociferous of the inmates, Felix (Michael Greyeyes), turns out to be an actual killer rather than a mere victim of an unfair system. That could be a compelling wrinkle to Michael’s decision-making. But Felix turns out to be pure and penitent, choosing to stay behind to pay for his crime. Recognizing the humanity of the condemned is a good thing in principle, but the realization is rote and facile. The only unique angle comes from Book, who’s understandably distressed at leaving someone behind to die in the DMA.

What follows is another raft of soulless backstory delivery, conspicuous speechifying, and attempts at tragic emotional resonance. “The Examples” fails to earn any of it. The notion of Felix wanting to make amends, passing on the family heirloom he stole from his victim to its rightful owner, is a heartening one. But the execution is so didactic and clunky, so stock and artless, that none of it adds up in the final tally.

Finding a strong overall direction for your story and worthwhile ideas to power it is vital for any show. It’s the foundation on which everything else is built. But it’s also not enough on its own. If you can’t find compelling ways to communicate those ideas, nuances in how to tell your stories, or an approach to dialogue and performance that creates palpable feelings behind it all, so much good work goes to waste. There’s plenty worth saving from “The Examples,” much like the prisoners Burnham is duty-bound to rescue, but also plenty Discovery would be better off leaving behind. 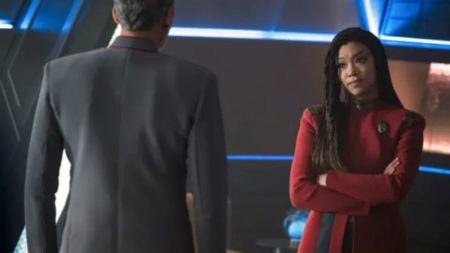 Star Trek: Discovery goes “All In” in episode 8, but fun isn’t in the cards

A zany casino romp runs aground on the season’s existential stakes and traumas. 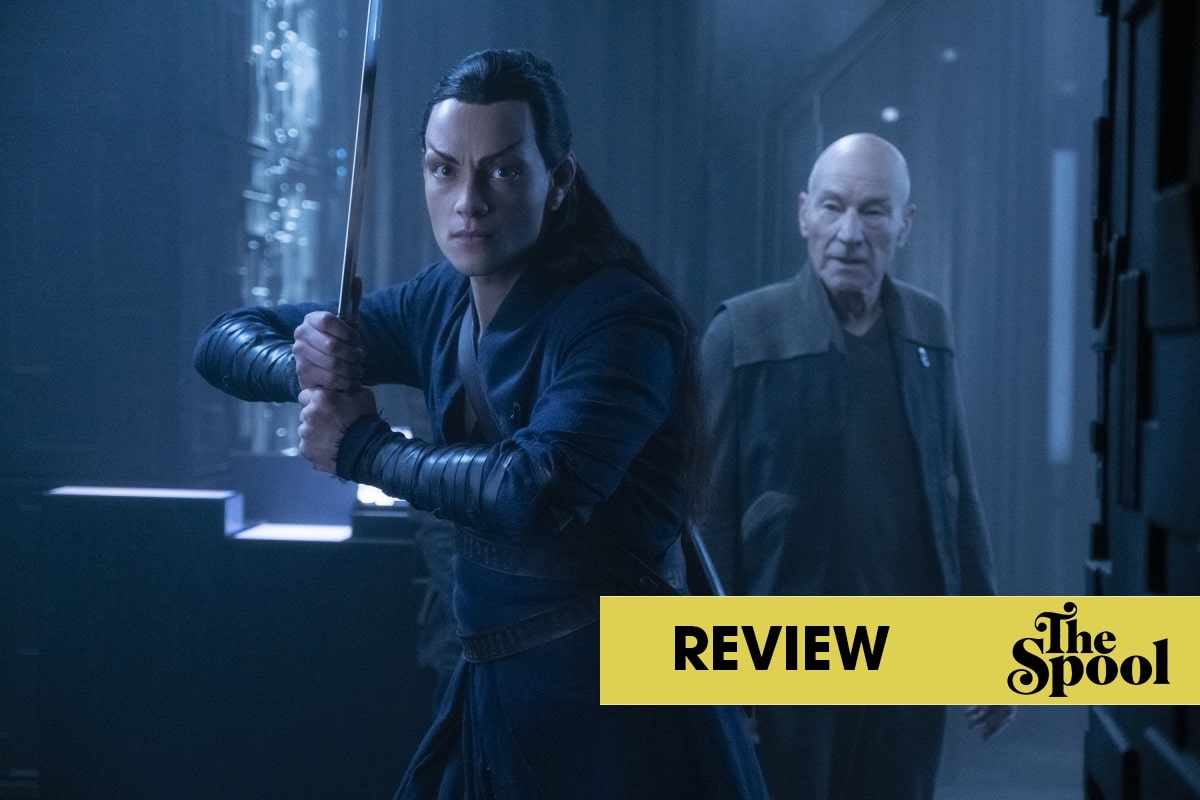 A sea of good ideas gets drowned in cliche as Picard and Soji face the truth.