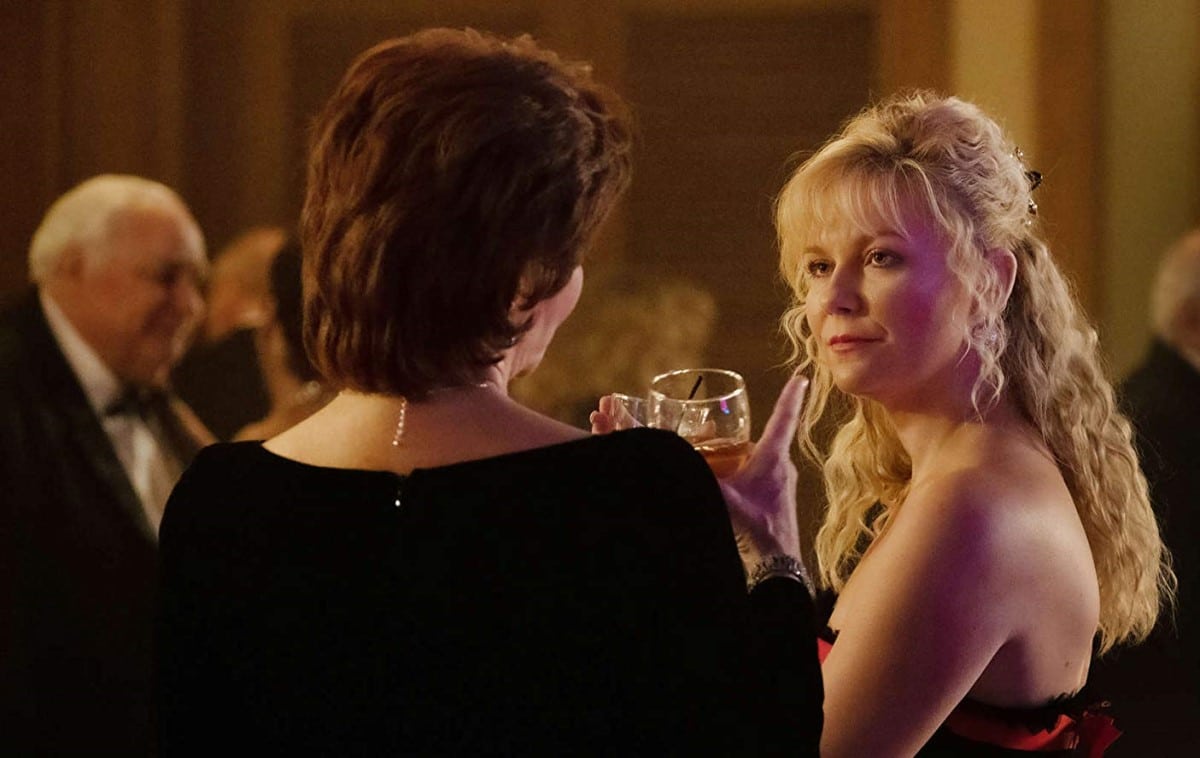 I have to admit, for a brief, horribly tense moment I thought I would have to say goodbye to On Becoming a God in Central Florida. Surely such a smartly written show wouldn’t resort to the cheap shock tactic of killing off Ernie (Mel Rodriguez), its purest, most well-meaning character. We don’t need a sacrificial lamb to understand the show’s core message that life is cruel, and “winners” only look out for themselves. Thankfully, he’s spared, although after witnessing the shooting of an armed robber, not necessarily for the better, in a sobering episode.

The high of visiting Paradise Cay has worn off for Krystal (Kirsten Dunst) and Cody (Theodore Pellerin). Krystal’s profits through FAM are already stagnant, and Cody is working less as security for the Garbeaus than as a glorified errand boy. Cody proposes again (this time for real), using a life-size cardboard cutout of himself, but Krystal refuses until he makes some discernible progress in getting Obie (Ted Levine) to agree to Splashercise. It doesn’t seem possible that Krystal, in the course of one episode, has changed her mind about her feelings for Cody, but understands perfectly the power of having someone both literally, and figuratively, by the balls.

When On Becoming a God ends next month, I hope someone who isn’t me writes about the fascinating dynamic of Krystal and Cody’s…relationship…partnership…business arrangement, whatever you want to call it. Obviously there are BDSM elements to it, which is something that is rarely shown on television without a seedy tone to it, but there’s more beyond that. It’s unclear how Krystal correctly guessed that Cody would be into being her “toilet boy,” only that it’s related to her savvy, constantly underestimated ability to read into people (remember when she told Roger in episode four that she’s good at “knowing what people want”). For Krystal, slapping and ordering Cody around might be the only way she feels really in control in a life where everything could still be taken away from her in an instant. Despite the intensity of their encounters, it’s perhaps the least harmful way they’re taking advantage of each other.

Obie, meanwhile, is dissatisfied with the company he’s keeping, believing he deserves to be rubbing shoulders with Senators and visiting dignitaries. He buys his way into a dinner with Vice-President Dan Quayle, and Cody manages to get himself and Krystal invited to it as well. Krystal is at the dinner barely five minutes, however, before she has a chilly encounter with Cody’s mother, Ellen (Mary Steenburgen), who reveals that it’s her mostly her money that Cody’s poured into FAM (“My son is a feckless tit”). Curiously, Krystal’s astute people reading skills seem to be absent here, as she goes on about Splashercise without noticing that Ellen is looking at her like a bug on a windshield. It may just be a testament to how passionate Krystal feels about her business venture, in a way that doesn’t feel phony and predatory.

Speaking of sincerity, Ernie counsels Victor (Reinaldo Faberlle), a disillusioned member of his FAM downline. Victor isn’t just dismayed with his lack of success, but with the fact that FAM is too white, where the motivational tapes and books are solely in English, and “all the catalogs are filled with people in turtlenecks.” Ernie encourages Victor to not just stick with FAM, but to return to the ESL classes he had previously abandoned, which Ernie then uses as an opportunity to sign up yet more downline. Perhaps surprising himself more than anyone else, Ernie is actually good at this, with a genuineness that Cody, with his cheap suits and used car salesman grin, lacks. He legitimately thinks he’s helping to improve lives — the fact that he makes money off of it seems to be merely a bonus.

Obie has made his fortune by sucking people dry of their hopes and dreams.

That armed robbery mentioned above, in which Ernie attempts to diffuse a situation that ends with the robber shot to death right in front of him, is his personal turning point. He feels his best self when he’s doing the bidding of FAM, and decides to devote himself to it full-time. Not even Travis went that far, holding onto his low-level insurance job, because otherwise how would he be able to keep paying for FAM products? One expects that this will be at least as disastrous a decision as giving Cody his own gun.

Meanwhile, back at the dinner, Krystal isn’t the only guest who has an awkward encounter. Obie attempts to chat up Vice-President Quayle (Joe Knezevich), looking for his assistance on an unexplained lawsuit, and Quayle treats him with the same sort of cool “who the fuck are you?” disregard as Ellen treats Krystal. Obie handles this public snubbing in the only way he knows how, by punching down, in this case mocking Krystal’s scrapbook and forcing her to embarrass herself by snatching it out of his hands like a child.

Finally getting that Obie has no intention of approving Splashercise, Krystal insists that she and Cody leave FAM so they can do it on their own. The reveal from Cody that the only real money made through FAM is with the “Garbeau System” books and tapes (which FAM sellers are required to purchase) isn’t surprising, and yet it’s still shocking just how both clever and cravenly evil it is. We’re not dealing with mere dishonesty here, but theft, and not just theft, but theft through cruel manipulation, convincing people that if the Garbeau System isn’t working for them it’s their fault, and perhaps they can improve their situation by buying more books and tapes, and attending more useless seminars. Obie has made his fortune by sucking people dry of their hopes and dreams.

People like Ernie, who, minutes after Krystal learns how FAM really operates, announces to her that he’s fully embracing the FAM lifestyle. Knowing full well that it’s her fault he’s at this point in the first place, she tries to talk him out of it, but Ernie, like Travis, reacts with hurt, anger, and defensiveness. How dare she try to take his dreams of success away from him? “This is hope,” he says. “Without it, people die.”

Now truly on her own, the episode ends with Krystal smashing the proverbial “in case of emergency break glass” window, calling recently unemployed reported Mirta Herrera (Melissa De Sousa) and leaving a message for her. It’s safe to assume it’s not about trying to sell her paper towels or pizza sauce. 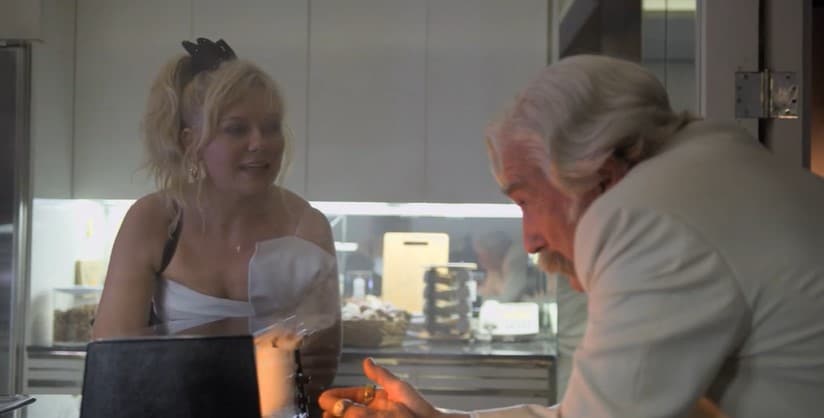 On Becoming a God in Central Florida Recap: “Many Masters” 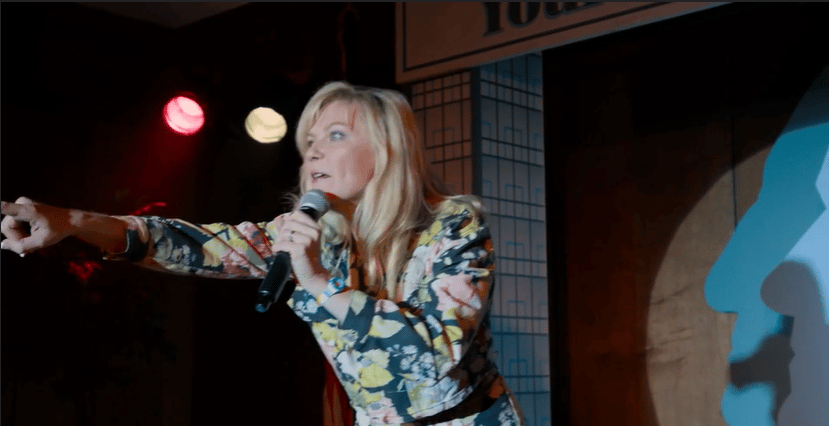 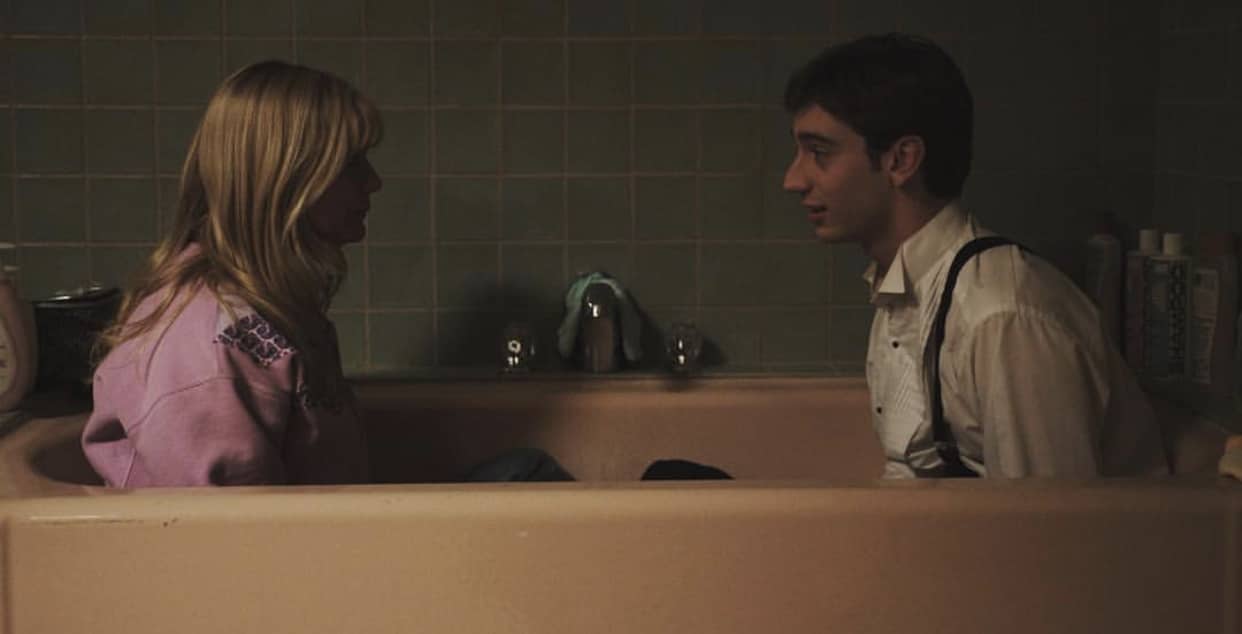