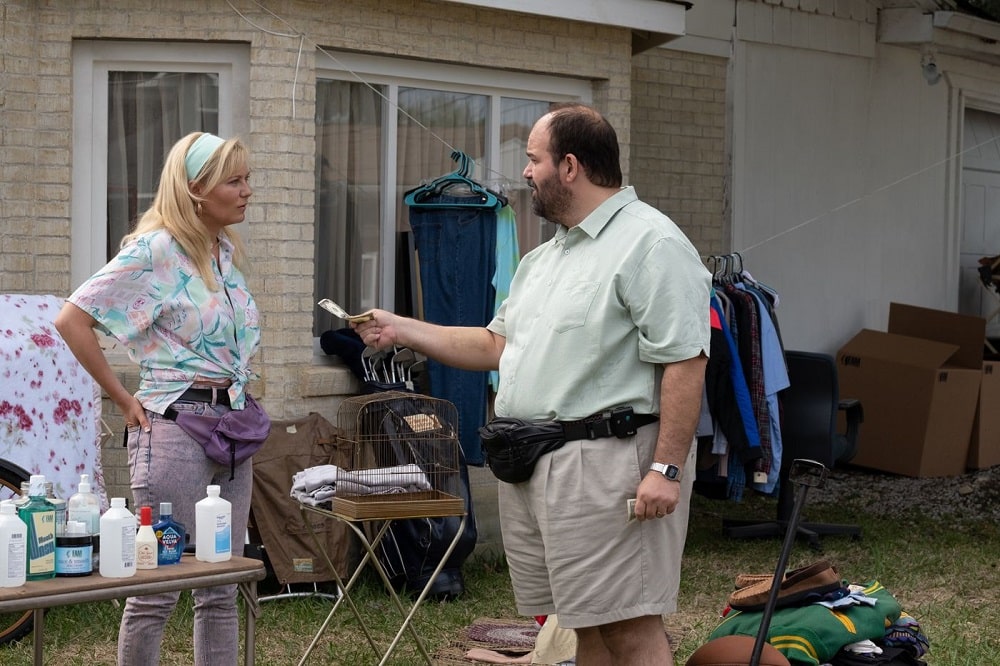 Krystal finally understands the gravity of her situation in a bleak second episode.

It costs a lot of money to be poor. It’s a constant game of catch-up, of robbing Peter to pay Paul, and taking even a moment for yourself to address personal matters — say, the death of your spouse — means immediately losing any ground you may be making towards recovery. The newly widowed Krystal (Kirsten Dunst) learns quickly just how dire her financial situation is in “The Gloomy-Zoomies,” the sobering, darkly funny second episode of On Becoming a God in Central Florida.

Within mere days of her husband Travis’s accidental death, the bank comes collecting, repossessing their above ground pool, washer and dryer, and even Krystal’s braces, though she’s able to save those at the last minute. As the bills keep piling up, she later learns that not only did Travis take out a second mortgage on their shabby little house, but that mortgage is past due and about to go into foreclosure. Cody (Theodore Pellerin), Travis’s mentor at FAM, comes calling with a “Sorry for Your Loss” cookie, first asking that Krystal take over for Travis, then demanding, then later bribing her. Shaken by Travis’s death, Cody is losing his touch, and, after meeting Pat Stanley (Josh Fadem), a salesman from a rival pyramid scheme, opts to take an approach that goes against FAM protocol, offering Krystal a considerable bonus to work for him.

Krystal turns Cody down initially, wanting to be rid of FAM once and for all, and tries to earn money through more honest means, though it’s never enough. She’s a born saleswoman, with an openness and friendliness that people respond to, but also some ruthless survival skills, as exhibited when she turns the alligator that killed (and presumably ate) Travis into food for herself. Really, Krystal is a far better fit for FAM’s “sell by any means” philosophy than the soft and child-like Travis, she’s just not quite ready to admit it yet. It takes a couple of souring experiences with individuals who profess to sympathize with her situation, and even want to help, but not without a heaping helping of condescension and phony concern on the side.

Krystal knows what those lingering looks Ernie gives her mean too, and it’s here where we start to see the first signs of that ruthlessness that’s going to quickly move her up within the FAM ranks.

On Becoming a God is setting up a fascinating, all too believable pattern of characters believing they constantly have the upper hand with Krystal because she’s poor white trash and they’re not, only to be shocked and offended when she doesn’t show the appropriate amount of humility. Buzz (P.J. Marshall), Krystal’s old boss from her beauty queen days, is one such person. He wants to hire her as a pageant coach for his teenage daughter, but is so incensed at her insisting that he pay her what she’s worth that he sets her up to take an even bigger financial hit than she has already.

On the other hand, in her struggle to survive, Krystal makes an unlikely friend in Rhonda the Repo Lady (Da’Vine Joy Randolph), who comes for her belongings but, moved by her situation, offers to be a shoulder to cry on as Krystal struggles with mixed feelings over Travis’s death. “Worst thing about about him dying is that I can’t divorce him,” Krystal says, though her refusal to let go of his high school football jersey — a symbol of perhaps the last time he ever experienced success — suggests she feels differently.

Speaking of mixed feelings, we get to know more about Krystal’s boss and friend, Ernie (Mel Rodriguez), who, bless, shows up at her yard sale and buys a bunch of useless junk, overpaying her for everything. Ernie is clearly in love with Krystal, but wracked with guilt about it. As is often the case when we deal with big complicated feelings, what he thinks he’s doing a good job of hiding is evident to everyone, including his sweetly accommodating wife, Bets (Beth Ditto), and young son, Harold (Cooper Jack Rubin).

Krystal knows what those lingering looks Ernie gives her mean too, and it’s here where we start to see the first signs of that ruthlessness that’s going to quickly move her up within the FAM ranks. One cringes to think how she’s going to use Ernie’s feelings for her to get ahead, and if Ernie will be able to figure it out before he ends up destroying his whole life, just as Travis destroyed Krystal’s life. It’s a tough world out there, though, and, as Obie Garbeau II says, you either stay ahead of the game, or you get run over.