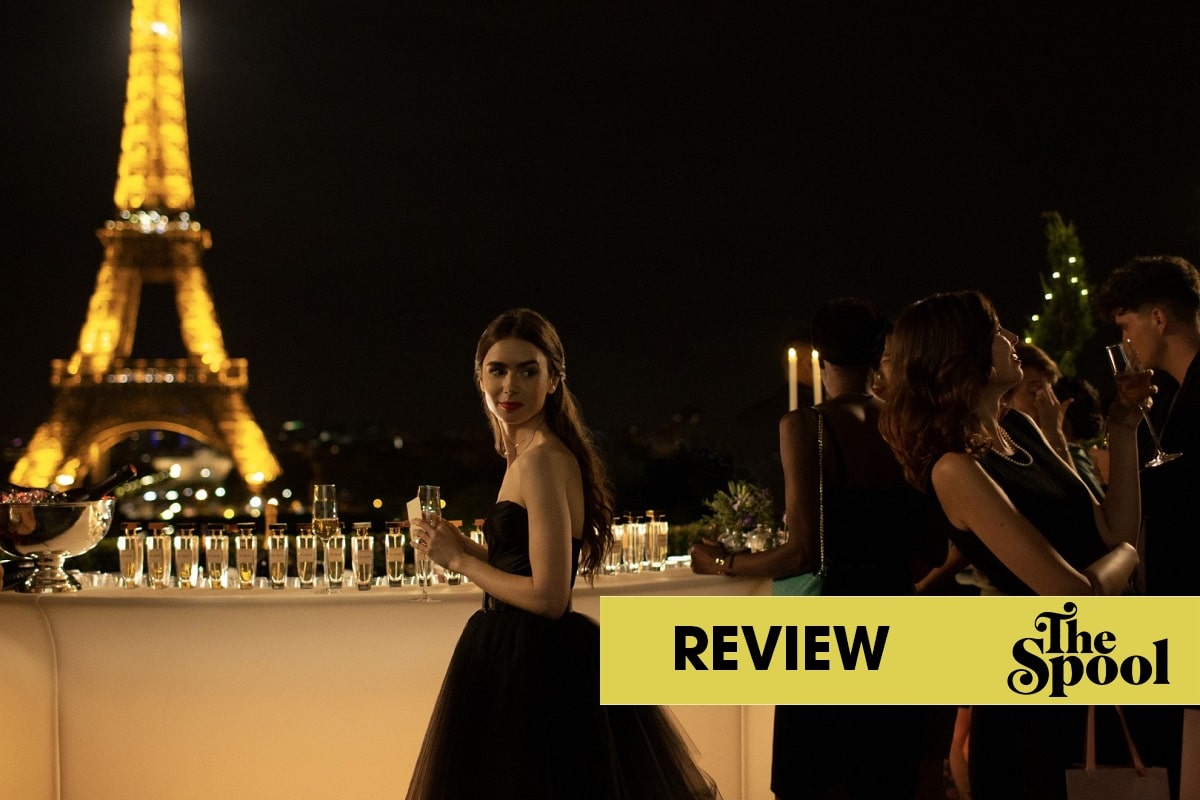 Darren Star’s latest series is a charming but forgettable comedy as pretty and thin as lace.

Created by Darren Star, creator of Beverly Hills 90210, Sex and the City, and Younger, Emily in Paris is Star’s newest frothy fantasy. Lily Collins takes center stage as the titular Emily, a plucky, charming young woman from Chicago who ends up taking a job in Paris when her boss (who is meant to get the job) finds herself pregnant. Given that France seemingly lacks obstetricians, boss Madeline (Kate Walsh) chooses to remain in Chicago, sending the non-French-speaking Emily in her place.

Sylvie (Philippine Leroy-Beaulieu), head of the marketing firm in Paris that Emily is sent to ‘Americanize,’ is immediately anti-Emily. Meanwhile, co-workers Luc (Bruno Gouery) and Julien (Samuel Arnold) are surely but slowly won over. While maneuvering the new cultural and corporate differences she’s been tossed into, Emily is lucky enough to meet new friend Mindy (the wonderful Ashley Park) and to find herself in a good old-fashioned will they/won’t they with handsome downstairs neighbor Gabriel (Lucas Bravo). Getting herself into and out of scrapes with a smile and a plan, Emily owes a great deal to her Star-creation sisters Liza and Kelsey from Younger.

It’s got a little bit of every single French cliché we’ve all come to expect: they love wine and sex and hate things like “corporate commandments”; Emily appalls Luc by telling him that she loves working; a character sings an (admittedly great) rendition of “La Vie en Rose” in a park. Emily moves into an older apartment building where she just can’t remember the French 5th floor vs the American 5th floor, and where she blows out all of the fuses in the building whilst plugging in her vibrator. So cheeky! Fortunately, most of these more sitcom-level misunderstandings fade as the season goes on, leaving Emily to juggle cultural differences as opposed to just surface-level physical ones. And those, I think we can all agree, are the tough ones.

But for all its light charms, Emily in Paris still struggles to figure out who the butt of the joke is — Collins’ pushy American or the wacky French characters around her. A subplot about sexy vs. sexism filtered through Emily’s American “wokeness” never amounts to much, and serves only to jumble audience reactions further. Is Emily right or is she a prude? Are her French coworkers more open-minded or out of touch dinosaurs? Chided for talking business at a party, Emily later sees a man and his mistress openly make out following a separate work event, and everyone shrugs and says “Love! Passion! France!”

Does Star want us to learn, as Emily does, to loosen up a little to not base her life around work, to not worry too much about her romantic entanglements? Or does he want us to think that her new coworkers are inappropriate? Are we to make jokes about workplace harassment and be appalled when a client gifts her lingerie, or shake our heads and laugh it all away?

Filmed in Paris, the scenery and all locations are gorgeous. Emily goes to glorious homes, drives through beautiful countryside, and eats at the most picturesque little cafés. Her clothes too are fabulous, though Emily does wear a selection of crop tops and little beanie hats that probably wouldn’t fly in her office in Chicago but in Paris are just part of her quirky American charm. Less charming is her early habit of speaking into her phone then shoving its translation app at non-English speakers.

Le Divorce as run through a Younger filter, Emily in Paris is very like the pastries our heroine treats herself to after every run. It’s sweet, it’s slight, and at only 10 episodes if you need this sort of sweetness in your life, then you’re in luck. Emily in Paris is a pleasant little respite from the news or the incoming flood of spookier October fare, but it’s ultimately a little bit forgettable.