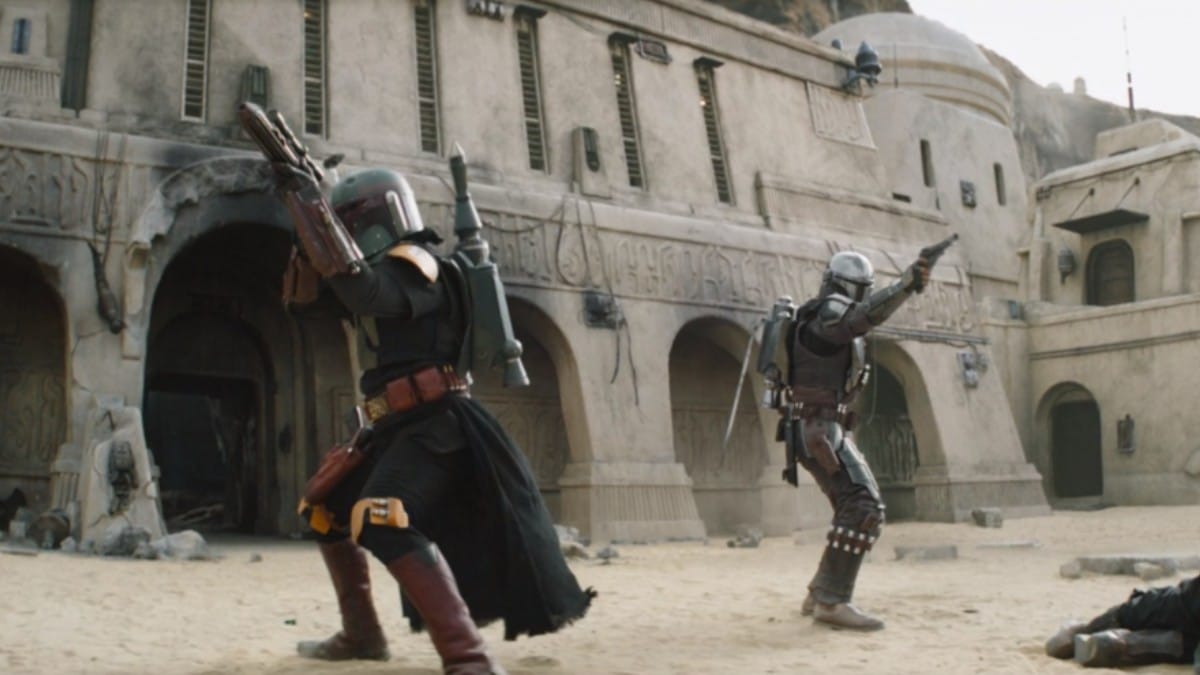 Well, friends and foes, we’ve arrived at the finale of The Book of Boba Fett. It’s been non-stop ups and downs (and more controversial than I could have imagined), and this episode is no exception. Will the Pykes finally attack full force? Will Grogu choose the path of the Mandalorian or that of the Jedi? Will Boba have a speaking role in his program? This much is certain: “In the Name of Honor,” directed by Robert Rodriguez and written by Jon Favreau, is action-packed. Let’s dive in and see what happens!

We open on Boba Fett (Temuera Morrison), Fennec Shand (Ming-Na Wen), and Din Djarin (Pedro Pascal) inside the bombed-out shell of Madam Garsa’s Sanctuary. Boba is more determined than ever to end the spice trade, though Fennec isn’t entirely on board with that call and Din is very sure that Cobb Vanth (Timothy Oliphant) and his Freetown reinforcements will be showing up any moment to help. Drash (Sophie Thatcher) and Skad (Jordan Bolger) convince Boba to wait for the Pykes at the remnants of the Sanctuary.

Over in Mos Eisley, Cad Bane meets with the Pyke leader and Mos Espa’s runaway Mayor Mok Shaiz and learns that the Pykes are the ones who massacred the Tuskens, not the Niktos. Fennec was right! This news is a delight to Bane, who now knows how to lure Boba out from the Sanctuary.

Meanwhile, an X-Wing approaches Peli Motto’s (Amy Sedaris) garage, and she assumes it’s the cops. She and her droids hasten to hide contraband as the ship lands, but there are no officers inside, just a familiar astromech droid and Grogu! Luke Naberrie* Skywalker, did you seriously just stuff a baby into your X-Wing and have your driver drop him off? You didn’t even know for sure where Din was, given R2’s annoyance that he isn’t in Mos Eisley. Peli happily takes Grogu and learns both his name from R2 (“That’s a terrible name!”) and that he’s wearing something shiny under his little robe.

So, Grogu having chosen the armor rather than the lightsaber means he just gets a bus ticket home, eh Luke? This has been a disappointing couple of episodes for the legend of Luke Skywalker, but maybe that’s a good thing. Luke, lionized as he was before the sequel trilogy, has had little time to fail. We’ve seen the triumphant young Jedi and the bitter older man, but little in-between (onscreen at any rate). Seeing this part of his life goes a way towards humanizing him character. People screw up. We all know what Luke’s biggest failure will be, but what sort of road did he walk until the fateful night he looked into Ben Solo’s heart? The terms Luke and Grogu parted on are unclear, so jokes aside, maybe the Jedi Master is starting to realize that there’s more than one path available to the Force-sensitive.

Back in Mos Espa, the Gang has split up into patrols: Tim and Tad watch the starport, Black Krrsanstan prowls the Trandoshan territory (which he must hate), and the Mods cover the Aqualish section. Boba, Din, and Fennec are holed up in the Sanctuary when Cad Bane appears outside calling for Boba. The Daimyo of Tattooine goes to meet his old foe, and Bane tells him two things: don’t depend on Freetown after the visit he paid its Marshal,  and the Pykes are the Tuskens’ true murderers. Boba, wound up by Bane’s words and their history (Jango Fett trained Cad Bane as a bounty hunter and Bane trained Boba after Jango’s death. Bane gave Boba the ding in his helmet and Boba gave Bane the wound that necessitates the metal plate on his head) is ready for a showdown right then and there, but Fennec talks him down.

Then everything goes to hell. Drash comms Boba frantically: the Aqualish have begun attacking the Mods. At the same time, the Trandoshans mob Black Krrsantan, ostensibly overwhelming and killing him. The Klatoonians turn on Tim and Tad, pushing the Gamorreans over a cliff to their deaths. Boba sends Fennec to see if the Pyke leader is still in Mos Eisley. She rescues the Mods on the way, but bands of Pyke soldiers begin to descend upon the Sanctuary. The Majordomo (David Pasquesi), who has been hovering about, offers a plan: surrender. Boba, to Din’s surprise, agrees and writes his terms down. The Majordomo reads the terms to the Pykes: nothing. Boba isn’t surrendering, he was creating a distraction for he and Din to get to the roof and attack via jetpack.

The battle isn’t going too well for our armored pair until reinforcements arrive: the enraged citizens of Freetown. They’re joined by teh Mods, and then Black Krrsanstan. The Pykes look to be turning tail… But no, they’re just making way for a pair of massive Scorponek droids. The Freetowners, Mods, and Krrsantan leave the Sanctuary to draw one droid away while Boba leaves to get reinforcements. Who should interrupt then but Peli and Grogu in a droid-pulled rickshaw? Din jumps on the back and directs them to go faster. Too fast, the rickshaw crashes flinging the trio into the path of the Scorponek. Doom seems night. But then come the roars.  It’s the rancor! And more importantly, Boba riding the rancor! (Might it have made good television to see him learn how to do this?) Rancor and droid clash. When blaster fire forces the beast to pull away the droid turns its focus on Din, only for to Grogu stop it via the Force. The rancor finishes the droid. One down, one two go.

I can’t help but think that this would have been an excellent time for the Tuskens to play the cavalry, but The Book of Boba Fett made its choice there. The rancor pulls down the other droid’s shield, saving the Mods and the Freetowners, who in turn begin picking off the fleeing Pykes (one of whom has the misfortune to become rancor chow). Cad Bane appears and knocks Boba from the rancor with his flamethrower, causing it to flee into the city. The rivals draw, but Bane is still faster, shooting Boba’s blaster away and yanking off his helmet. Bane is all set to kill his former student when Boba calls on his Tusken training, rolling out from under the Duros and knocking him down with his gaffi stick. “I knew you were a killer,” Bane says smugly before Boba runs him through.

The rancor, loose and scared, is wreaking havoc in town as Freetowners and the Mods shoot at it. Din calls the shooters off and jetts up to try and ride the rancor himself. The rancor isn’t having that and tries to eat the hapless Mandalorian who, saved by his helmet, gets thrown to the ground. Grogu rescues his dad once again, escaping from Peli and using the Force to calm the rancor to sleep before conking out himself. Back in Mos Eisley, the Pyke leader meets with Mok Shaiz and the treacherous Mos Espa gang leaders. The Pykes announce they’re leaving. Tatooine has proved inhospitable, and any deals that may have been made are best left forgotten. Unfortunately for them all, they’re not alone. Fennec Shand, master assassin, punches their tickets one by one. She finally got to murder some people!

Sometime later, Boba and Fennec stroll through the streets of a recovering Mos Espa, wondering if they’re truly cut out for the life they’ve built. But if they don’t protect Mos Espa, who will? They meet up with the Mods and Black Krrsanstan and a nice crime family laugh is shared by all. Up in space, Din and Grogu are on their way in their shiny new-old starfighter. The former astromech dome is indeed wonderfully Grogu-sized. He starts tapping his little metal ball (one of the last remnants of the Razer Crest) on the dome with increasing frequency. Despite Din’s protestations, he ultimately indulges his son and hits the turbo.

There’s one last person to check in on: a familiar silver-haired Marshal, recuperating in Boba’s bacta tank. Watching over him, scalpel in hand is the Modifier (Stephen ‘Thundercat’ Bruner). It seems Cobb Vanth isn’t done just yet.

The most heartfelt parts of the episode are the reunion between Din and Grogu, who effectively overshadow Boba in his own show again.

The Book of Boba Fett has been unfocused since episode one and the two-episode diversion into Mandalorian territory didn’t help matters. “In the Name of Honor” goes a long way towards patching up the gaps that Episodes 7 and 8 left, but it’s not quite enough. It’s a fun, action-packed episode, that nonetheless feels almost colorless in places. There’s a real lack of stakes in a story that should be full of them. Two minor but recurring characters die and no one mentions it, the bombing of Garsa’s place is an afterthought, and there’s just not enough time for the audience to worry about the Mods or Black Krrsantan before they’re revealed to be alive. Boba riding in on a rancor is fantastic, but getting anything about their bond between the rancor’s introduction and this episode would have been nice. The most heartfelt parts of the episode are the reunion between Din and Grogu, who effectively overshadow Boba in his own show again.

All that said, The Book of Boba Fett remained an entertaining piece of Star Wars lore, and any time spent in this galaxy is a good time. It was never going to be all things that all people wanted it to be, and it was unfairly maligned for its apparent deficits in that regard. I doubt this is the last we’ve seen of these characters, and I, for one, look forward to meeting them again. 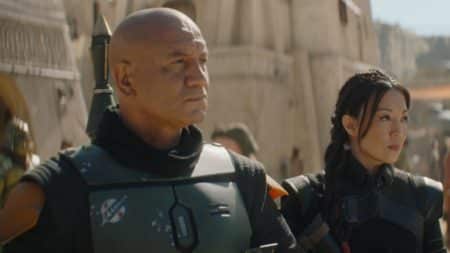 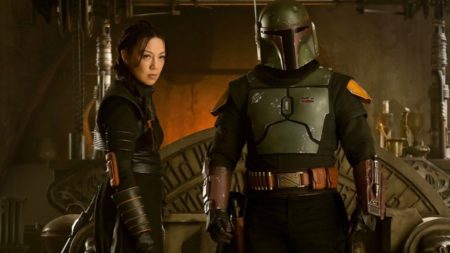 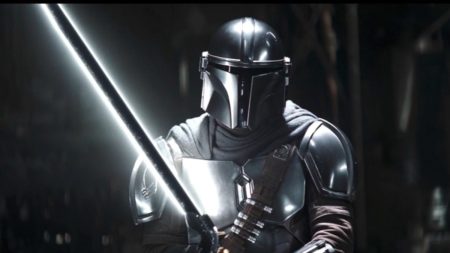 The Book of Boba Fett Episode 5: We swear this isn’t an episode of The Mandalorian

The Star War series takes a break from its lead to showcase another show’s protagonist. NOW STREAMING: Powered by JustWatch Welcome back all to this..