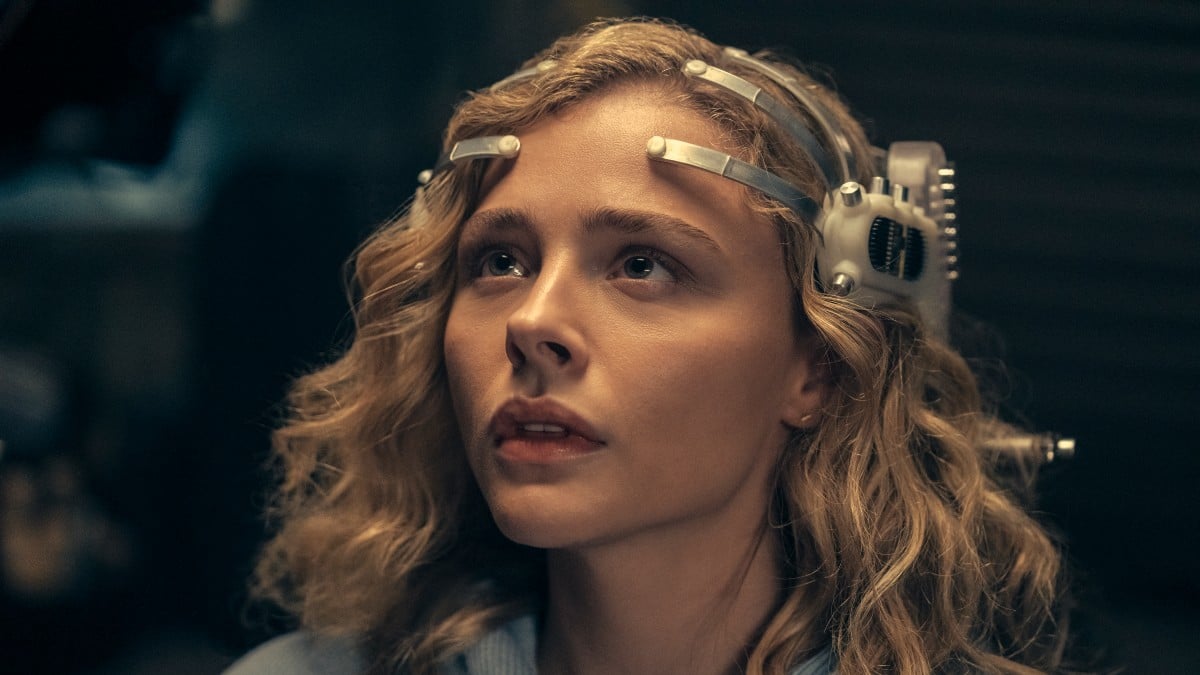 North Carolina, 2032. Flynne Fisher (Chloë Grace Moretz) is a skilled gamer. Pro gaming (usually helping some rich schmucks win victories they couldn’t on their own) is a viable way for her and her cyborg’d-former-Marine brother Burton (Jack Reynor) to earn extra cash. They live with their ailing mother Ella (Melinda Page Hamilton) a half-step ahead of financial ruin in a town more or less run by spiritual-cousin-to-Road-House-villain-Brad-Wesley Corbell Pickett (Louis Herthum, Westworld).

London, 2099. Wilf Netherton (Gary Carr, Downton Abbey) is a fixer. When his boss/sort-of-friend Lev (JJ Feild) needs something handled, he’s the one to handle it. Lev is estranged from his sister Aelita (Charlotte Riley) but still cares for her as best as anyone can in a city where the sky is the color of an old television tuned to a dead channel, gargantuan statues tower above even the tallest skyscraper, and a sinister think tank called the Research Institute, run by the cheerfully ruthless scientist queen Cherise (T’Nia Miller), towers above all other movers and shakers.

The Peripheral marks the first time that science fiction novelist William Gibson’s work has been adapted to long-form television. Gibson—one of the key figures in the cyberpunk movement—is a skilled prose stylist, a masterful observer of the world and its possible turns, and excels in crafting compelling, memorable characters. Thanks to Moretz and the ensemble working alongside her, The Peripheral brings Gibson’s thorny antiheroes-of-many-stripes to compelling life. The story that showrunner Scott B. Smith surrounds them with, however, is disappointingly vague.

With Flynne, Moretz builds a woman who has built an acceptance of her life as it is brick by bloody brick. There’s no cure for her mother’s illness—so she’ll take care of her as best she can. Her longtime crush Tommy (Alex Hernandez, Mafia III) is getting married—she likes the woman he’s marrying and is glad that he’s happy. She and Burton have a lot of love for each other, and it’s love complicated by their intertwined but distinct traumas—so they do the best they can and apologize when they cross lines. It’s a life, a still life. A life that Aelita’s plan obliterates.

Suddenly, forward momentum is possible. Suddenly, the world is so much more. Suddenly, mortal peril is the new normal. So Flynne adjusts. And Moretz has a ton of fun with the adjusting. She balances Flynne’s cool-headed pragmatism and impatience for the all-will-be-revealed-in-timery that Wilf and company turn to as their first resort with a moral core that she strives to keep intact even while acknowledging learning how to bend it is essential to her survival.

Of Moretz’s castmates, Jack Reynor does the best work with her. Burton Fisher loves his sister dearly, and he can adjust to being in mortal peril better than many. But when it comes to navigating the more fraught parts of relationships (say, acknowledging that Flynne’s experience of the time he was in the corps was not his own, or being there for his friend Connor (Eli Goree) living life post-service as a triple amputee) he struggles. He’s a good brother to Flynne, she’s a good sister to him, and their relationship is one they have to actively work on.

Watching the Fisher siblings try to navigate the conspiracy they’ve been pulled into and figure out how to make their vastly different approaches to life click is the most fun part of The Peripheral, with a close second being the delightful work Miller and Herthum do as the villains. Cherise and Corbell are unrepentantly loathsome people who delight in being loathsome.

Miller and Herthum build layers into them beyond “WE’RE EVIL!“—Cherise is committed to a mission she regards as essential to humanity’s future and Corbell seems to be a solid husband—and simultaneously they have so much fun with playing not just evil, or even EVIL, but EEEEEEEEEVVVVVVIIIIIIILLLLL. It’s a delight.

Would that The Peripheral‘s story was as well crafted as its characters. In adapting Gibson’s novel, the creative team opt for the enigmatic. Where the novel is a murder mystery that leads to a conspiracy, the show aims to be a wider-scope conspiracy thriller from the jump. But six episodes in, the plot is so vaguely realized as to be ephemeral. And that vagueness acts as a roadblock to exploring the world and the way technology has shaped and been shaped by it. It’s disappointing.

Moretz, Reynor, Miller, and company do very fine work in The Peripheral. It’s a joy to watch them, and their individual stories make the show a solid watch. I hope that the larger-scale storytelling becomes clearer and more specific than it currently is.

Isabelle Huppert and Chloe Grace Moretz amp up the camp in Neil Jordan's offbeat thriller about a madwoman searching for a daughter figure any way she can. 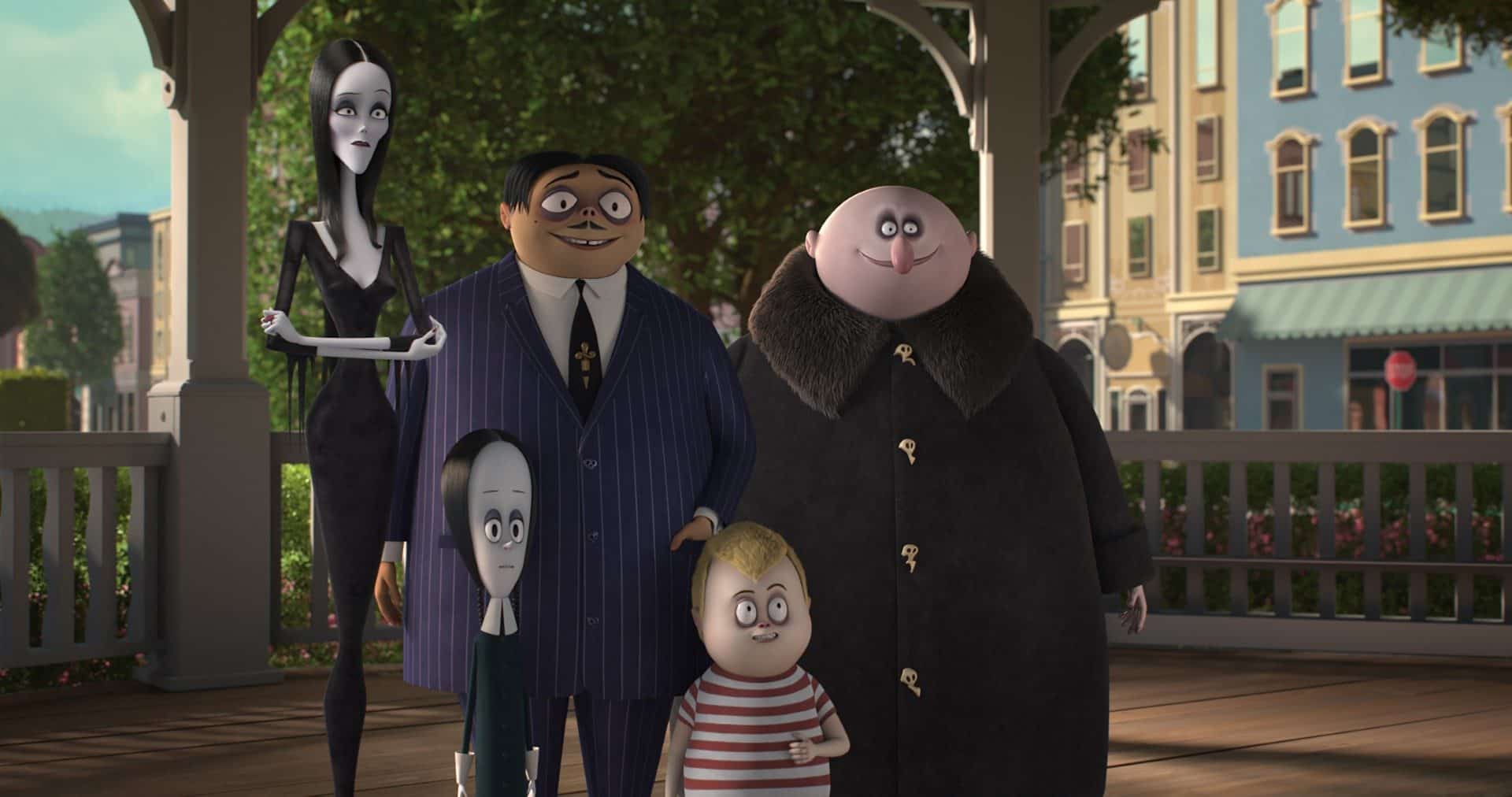 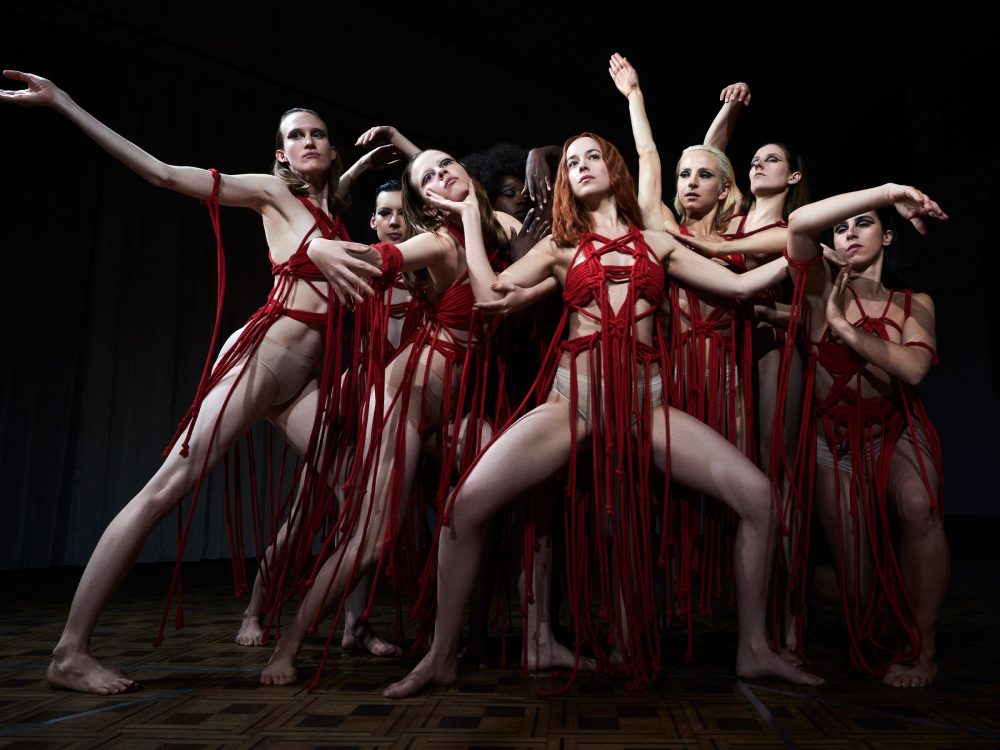 Luca Guadagnino’s disturbing, cerebral remake of the Dario Argento giallo original is an ice-hot knife to the cerebellum, its scares shrouded in terrifying mystique. This..