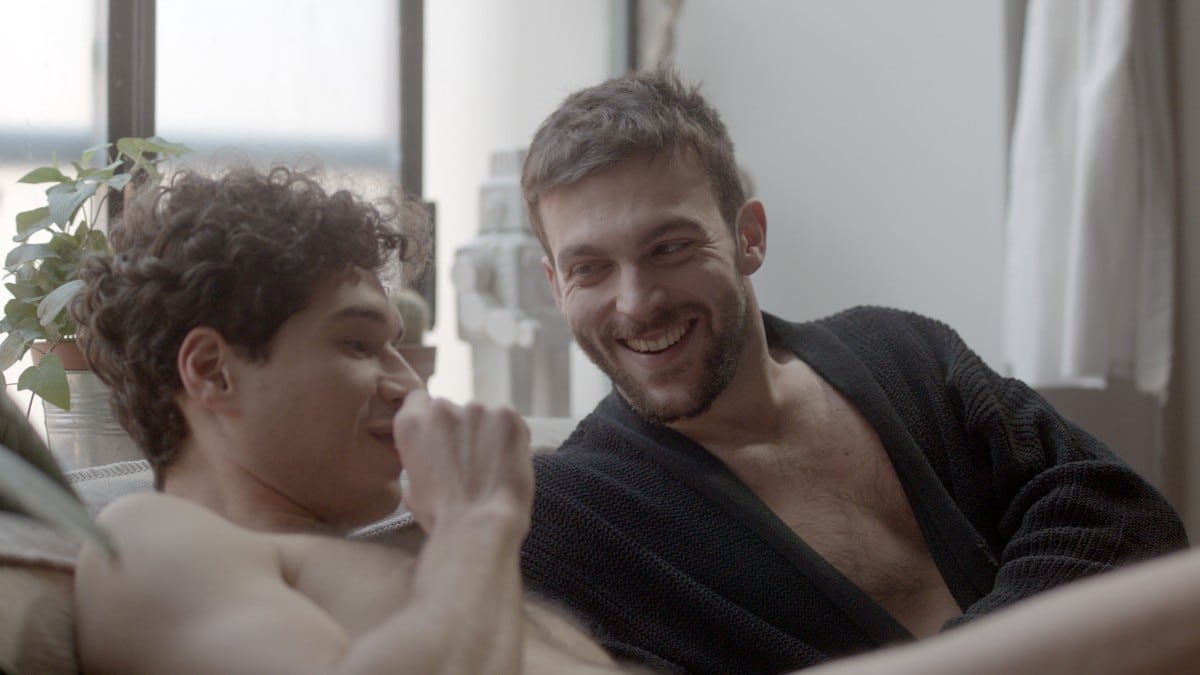 Alessandro Guida and Matteo Pilati’s dramedy recovers from an early monotone to become a warm study of a man rebuilding his life after his husband dumps him.

Ah, breakups and baking, a classic cinematic combination. By now, the two are so thoroughly mixed that their stories make their own crust. It’s a tried-and-true recipe, honed in the Eat Pray Love era, and few try to divert from it. With their new film Mascarpone (originally Maschile Singolare), directors Alessandro Guida and Matteo Pilati play with different ingredients and measurements than the most famous recipes, but the result may not be as delicious as they would have liked.

Antonio (Giancarlo Commare) wakes up alone in bed. His husband Lorenzo (Carlo Calderone) isn’t there. Unperturbed, Antonio goes about his day, going to the gym, making a tiramisu as a surprise, enjoying the mundanity of married life. And then Lorenzo comes home and asks for a divorce. Antonio is cast adrift, listlessly trying to find himself beyond his now-ended marriage.

He ultimately lands a spare room with Denis (Eduardo Valdarnini), a kind and flamboyant sex worker. Denis introduces Antonio to Luca (Gianmarco Saurino), the owner of a small bakery that needs more hands. Working with Luca, Antonio discovers the depth of his passion for baking. In doing so, he learns to become the person he’s been kneading in his life for a long time.

It’s a “How Stella Got Her Gluten Back” story. There’s real loveliness to the way Mascarpone celebrates queer friendships. Denis and Luca look out for Antonio as he finds his footing on dating apps and eventually rediscovers his sexual groove. Commare’s Antonio is a richly emotional character, and he does impressive work during a series of difficult scenes where Antonio’s life collapses from one self-piteous layer to the next. Commare has strong chemistry amongst all his castmates, but it’s Antonio’s friendship with Christina (Michela Giraud) that is truly charming.

Giraud is sharply intelligent with her choices, which prove to be a critical ingredient to the film’s success. Without her, there wouldn’t be much lift to the picture’s melodrama. Despite the charming concept and a bright, plucky score worthy of The Great [Italian] Bake Off, this isn’t an airy film—not unlike Antonio’s mascarpone.

A whipped-up rhythm, especially once Antonio’s life enters its whirlwind of work and romance, would have been welcome.

Indeed, initially, it’s kind of sour. Even when Antonio begins to fall back in love with life and pastry-making, the picture’s pacing doesn’t change. A whipped-up rhythm, especially once Antonio’s life enters its whirlwind of work and romance, would have been welcome. Despite all the fun, time doesn’t fly. It barely churns at times. Instead of presenting a delicacy layered with light and heavy moments, Guida and Pilati’s film feels like a dense sheet cake. It has more texture than it does flavor, and it’s not as delicious as one would hope.

Yet, as it sits, Mascarpone reveals some sweetness. Despite missed opportunities to make the film feel tonally complex, screenwriters Guida, Pilati, and Giuseppe Paterno Raddusa should be commended for not over-baking their metaphors. Yes, mascarpone binds things together and it tastes better when you do it yourself, but they don’t make you choke on it. Instead, we’re invited to savor just a small spoonful of meaning.

Perhaps the original Italian title, Maschile Singolare (Masculine Singular) makes more sense and would elicit a different audience expectation. Because while this film is about Antonio discovering a dedication to baking, it’s more so about him discovering himself. With a title like Mascarpone, one might expect Antonio’s life to change through his baking. To the credit of its creatives and the detriment to its duration, Antonio finds himself in his own way, in his own time, at his own pace.