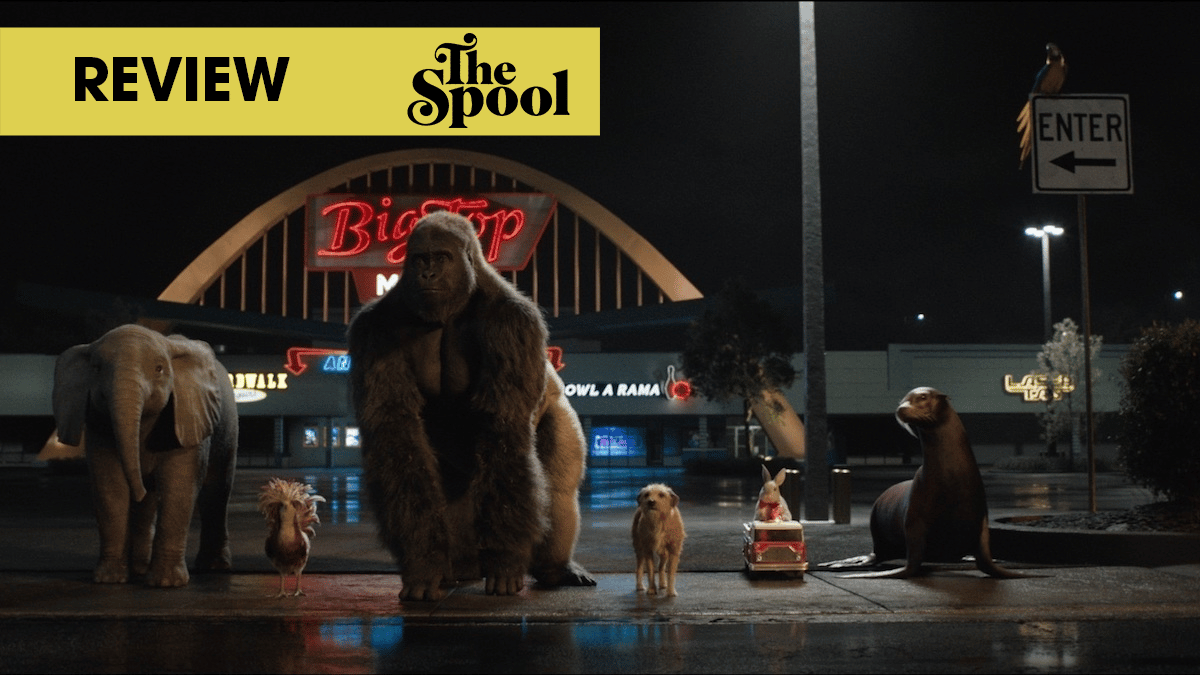 Somewhere on a whiteboard at Disney studios, it must say: “Danny DeVito + Circus + Uncanny Valley CGI Animals = $$$.” Or, more likely, studio execs said, “We spent a lot of money on the software to make the Lion King remake, so make sure to use it a few more times!”

In any case, all three of the above return in Disney’s latest, The One and Only Ivan. Thea Sharrock’s family film, which co-star Angelina Jolie helped produce, is the tale of Ivan the Silverback Gorilla. The tale comes from Katherine Applegate’s novel, which the eponymous real life gorilla artist helped inspired. (And yes, Appegate is the K. A. Applegate of Animorphsfame.)

The story opens on Ivan (Sam Rockwell) as the headlining attraction of Mack’s (Bryan Cranston) circus housed in a shopping mall. In an effort to draw huge audiences like it used to, Mack acquires baby elephant Ruby (Brooklynn Prince), since “everyone loves baby animals.” While Ruby packs in the audience, elder elephant Stella (Jolie) wants her to experience freedom, and has Ivan promise to help Ruby leave the circus. Ivan, along with his wisecracking stray dog best friend, Bob (DeVito), wracks his brains trying to think of a way to get to the wild — or at least a zoo. When he develops a knack for art, things start to change for the circus, and for him.

If that synopsis seems a bit confusing, that’s because the plot feels episodic despite the three-act structure. This is because Sharrock and screenwriter Mike White smash together various plotlines that seem to work against, rather than with, each other. The film veers from Ivan wanting to save the circus to wanting to escape it seemingly at the drop of a hat. Then there are the extraneous human subplots that don’t add anything to the overall story.

The child audience stand-in, Julia (Ariana Greenblatt), is given a sick mother — Disney is nothing if not consistent with its deceased or diseased parents — but even this seemingly important detail is left hanging. The movie only mentions it again in passing. Ivan’s life story intertwines with Mack’s backstory as well, making it even more confusing as to how we should feel about Mack and the circus. Should we love Mack, or should we resent him for holding the animals hostage? Do we want the circus to succeed, or do we want it to disband?

With better storytelling, these elements could synthesize into a more robust character study. What we get, however, is a poorly paced story that drags throughout just 94 minutes with screen time consisting of pointless dialogue scenes that, despite characters talking to each other, don’t tell us anything about the characters’ inner motivations. The plot drives the character arcs rather than characters driving the plot, motivation changing frequently.

Ivan wants to leave the circus because the plot needs him to, not because he realizes he wants to. Mack doesn’t have a moment where he realizes the animals would be happier free. Even more frustratingly, it takes three-fourths of the film to go by before Ivan’s artistic sensibilities have a direct bearing on the narrative despite this being one of its primary selling points. We came to see a gorilla that paints. Why waste so much time getting to it?

The plot drives the character arcs rather than characters driving the plot, motivation changing frequently.

With such limited character building, The One and Only Ivan wastes its cast. Rockwell gives Ivan some warmth but little personality. DeVito’s Bob is obviously meant to be the comic foil to Rockwell’s straight man, but the film holds little laughs (though thankfully, it’s a children’s film that only has one fart joke). Cranston, is, well, Cranston; his performance is lively even if the character is thin. The real tragedy is the waste of the supporting cast. Ivan’s fellow circus performers are voiced by some true greats: Chaka Khan voices a baseball-playing chicken and Helen Mirren gives life to a pedigreed poodle. But these characters barely get any screen time, and what time they have is ultimately forgettable. (I didn’t even realize Mirren was in it until I read the cast list.)

Despite all this, the CGI animals really do look great, and they almost leap out of the uncanny valley. However, cinematographer Florian Ballhaus does little with the camera to set the mood or tell the story. The camera gets out of the way for the dialogue, and wide and mid-range shots of characters dominate the movie. Craig Armstrong’s score carries all the emotional cues; he lays the schmaltz on heavily. Visually and musically, it’s pretty standard family film fare.

That isn’t to call The One and Only Ivan a bad film, though. It’s just supremely disappointing, especially given those involved. Your mileage will vary depending on how much you like talking animal movies or inspirational animal stories. If those are your (or your children’s) cup of tea, you’ll get an hour and a half of enjoyment. If not, it’s better to scroll to a different choice.

The One and Only Ivan swings onto Disney+ this Friday, August 21.

The One and Only Ivan Trailer: Jurassic World Dominion is a failure on a global scale

Colin Trevorrow injects plenty of dinos and nostalgia to the series, but not much else. 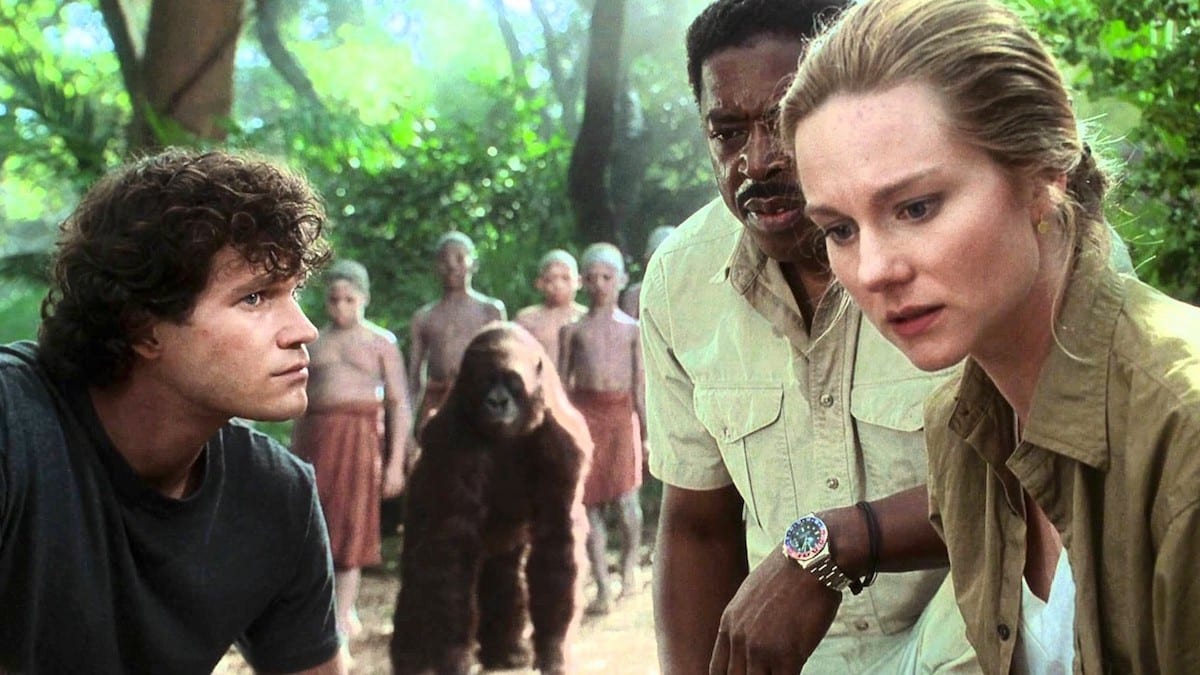 25 years ago, Laura Linney shot lasers at evil gorillas in the apeshit “Congo”

Far from good but definitely not boring, Frank Marshall's adaptation of Michael Crichton's novel is a sick day viewing that deserves its due. 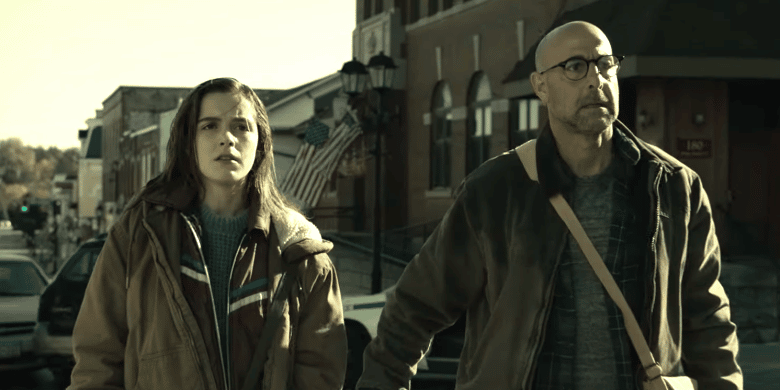 The Silence Review: A Big Pile of Shhhh

Comparisons to A Quiet Place are the least of the problems in this cheesy, poorly paced apocalyptic horror film.